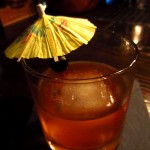 Time flies when you’re having rum, and just ahead of Caña Rum Bar’s two-year anniversary (see below), GM Allan Katz has debuted the Caña Spring Cocktail Menu. The new list is a collaborative effort that features many of Katz’s creations as well as contributions from his talented crew. Katz recently hosted a tasting of the spring cocktails, listed as Daggers, Pistols and Cannons in order of increasing potency and complexity. Faced with sampling this dozen-strong list of potent potables, I was glad to have backup in the sturdy liver of fellow imbiber Ron Dollete of Lush Angeles. Bartenders Danielle Crouch and Angela Gomez fired off each round of our selections from the new menu (one of Caña’s best yet) with deadly accuracy.

All cocktails are regularly priced at $12 unless otherwise noted. 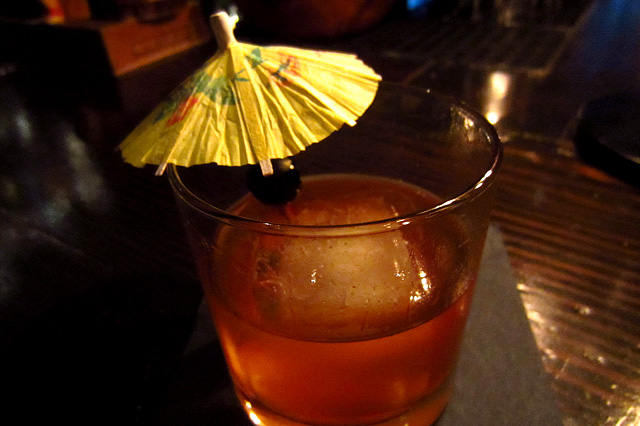 The session began with one of the big guns, the Luau Old Fashioned ($13): Franklin’s ’cue-infused Old Granddad 114° and Balcones Brimstone, roasted pineapple syrup, smoked espresso-cherry bitters. The menu notes that “Allan went down to Austin to get the nation’s greatest ribs into your drink. From there we layer on everything you’d find at a luau except the volcano.” Crouch explained that this latest iteration of the cocktail ups the meat and smoke factor; vegetarians are urged to try something else on the menu. 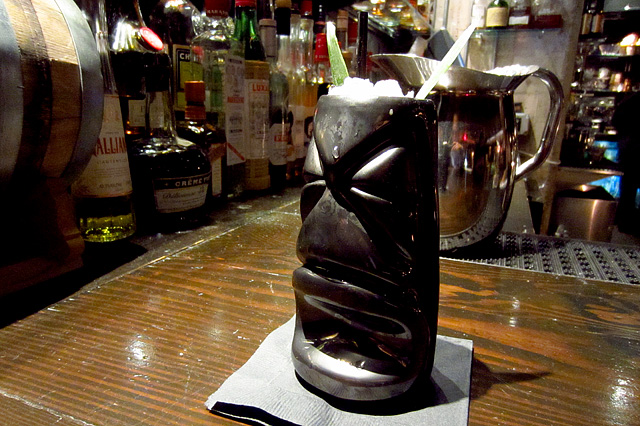 Apparently imitation isn’t the sincerest form of flattery, at least according to the Caña menu: “Our Frankenstein-ing of two tiki classics inspired theft!” An epic mashup of the classic Fog Cutter and Painkiller tiki drinks, the Original Fog-Killer first made its Caña debut as a punch. Though it’s now in a more manageable single-serving size, it’s still dangerously good and loses none of its firepower. 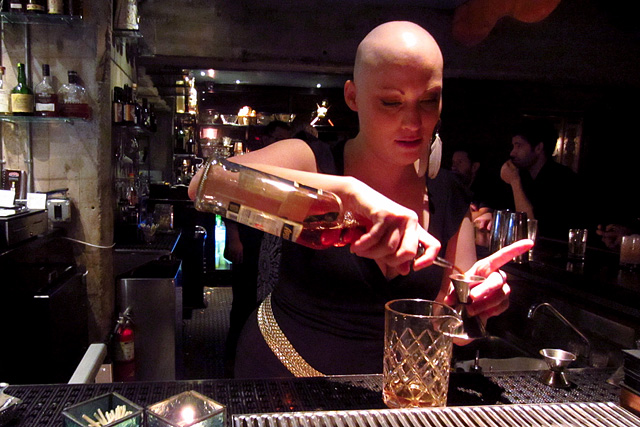 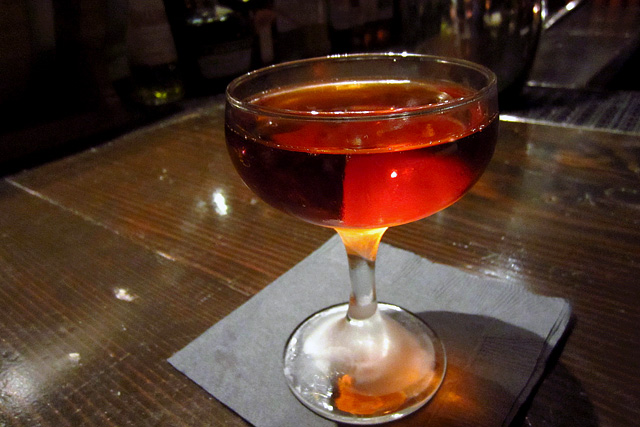 One of the standouts of the spring menu, the Rope Burn by Dave Shenaut Ron Dollete is a riff on a drink created by Justin Pike (The Tasting Kitchen). As Dollete wrote in his blog post, the Smith & Cross “takes the bitter elements away and replaces it with funky and sweet notes.” 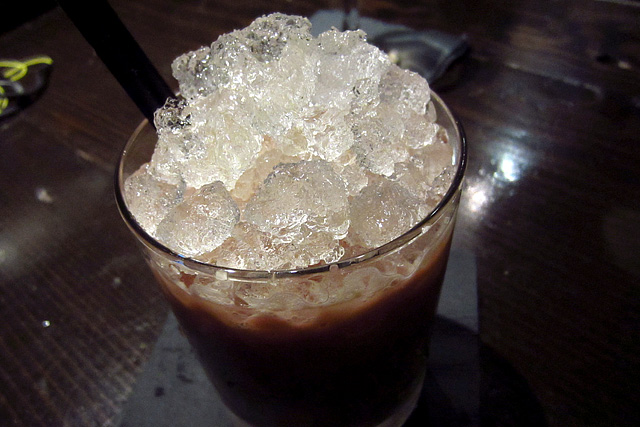 We moved on to the Pistols, drink-for-drink the best section of the new menu. First up was the delicious Coffee & Cigarettes, a Crouch creation made with Vietnamese-style coffee, Jamaican Rum, dashes of Campari and Cedilla Açai liqueur, finished with a spray of Cohiba tincture. While there’s no literal “cigarette” paired with the cocktail (as in the 1886 cocktail of the same name), the subtle hint of smoke comes through in the finish. The cocktail’s name alone seems to be a draw; several were ordered during the tasting. 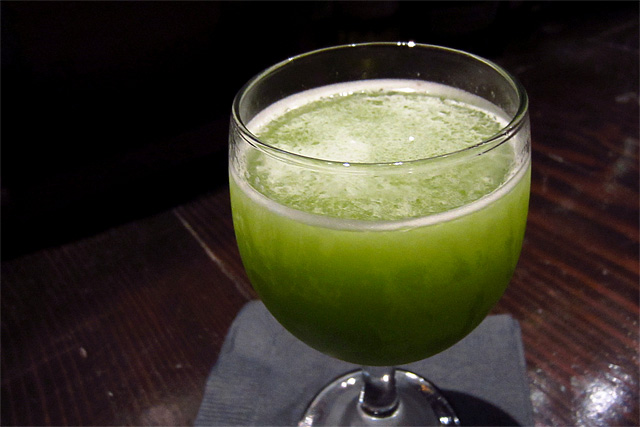 Most people would describe the Burmese Madam as a Pegu Club variation, an excellent sipper made with Plymouth Gin, lime, house-made grenache curacao and orange-rose bitters. Of course, Katz isn’t most people, so the menu lists the Burmese Madam thusly: “If there existed a secret brothel beneath the original Pegu Club this would be its house specialty.” 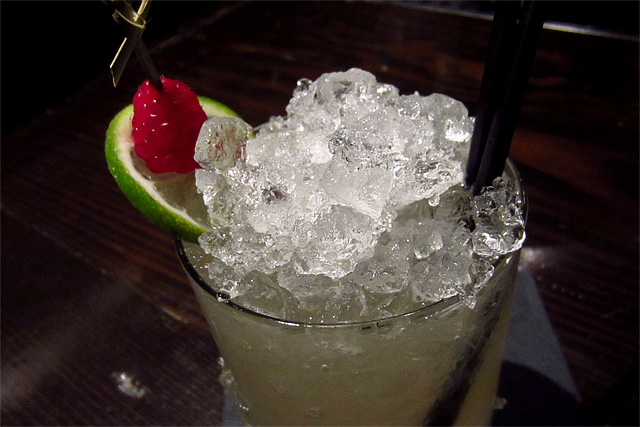 With her St. Raphael Sour, Gomez pays tribute to F. Scott Fitzgerald, who is credited with the first published record of the daiquiri. Farigoule, a thyme liqueur from the Provence region of France, was popular in St. Raphael, where Fitzgerald wrote The Great Gatsby. Who says drinking isn’t educational? 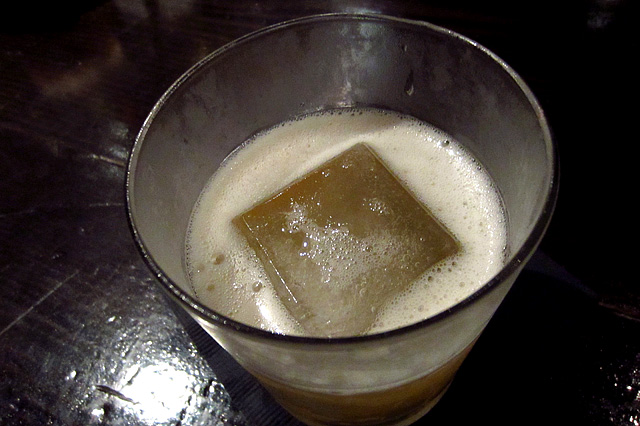 We went back to the Cannons and finished the tasting with a bang. The Arms Race ($13) was inspired by a visit to New York’s Amor y Amargo, where Sother Teague introduced Katz and Dollete to the Eight Amaro Sazerac. Never one to back down from a challenge, Katz fortifies the Arms Race with nine kinds of bitters, an absinthe rinse and a dash of Peychaud’s. Over to you, NYC!

CAÑA TWO-YEAR ANNIVERSARY
Caña kicks off its first Sunday on April 22nd with a Two-Year Anniversary Party, or as Katz puts it, “Caña is entering its terrible twos!” The new spring menu is only the beginning; KCRW DJ Jeremy Sole will be flying in directly from Coachella to drop his exclusive dub plates and global grooves. (No word yet on whether Tupac’s hologram will make an appearance on the patio.)

In honor of last year’s Thirsty in LA 2-Year Blogiversary bash at Caña, Katz composed an ode to bartenders, bloggers and enthusiasts the world over. Remember these verses as we stretch our livers and prepare to celebrate Caña’s second birthday:

~A Pledge to the Bar Rag~

Whether bartender or imbiber; shaker or typer, let us each toast the spirit of the world’s greatest fighters,

the men and the women dedicated to making souls brighter.

So let’s raise ‘em high and make this an all-nighter!