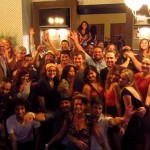 Art Beyond the Glass: Thank You Los Angeles!

It’s been two weeks since Art Beyond the Glass, and now that I’ve decompressed and my synapses have started to fire properly again, I’m faced with the daunting task of following Lindsay Nader’s recap and Zahra Bates’ guest post. So if the reader will allow me to indulge in a few belated “thank you”s and rambling thoughts, I promise to return this space to your regularly scheduled booze blog. 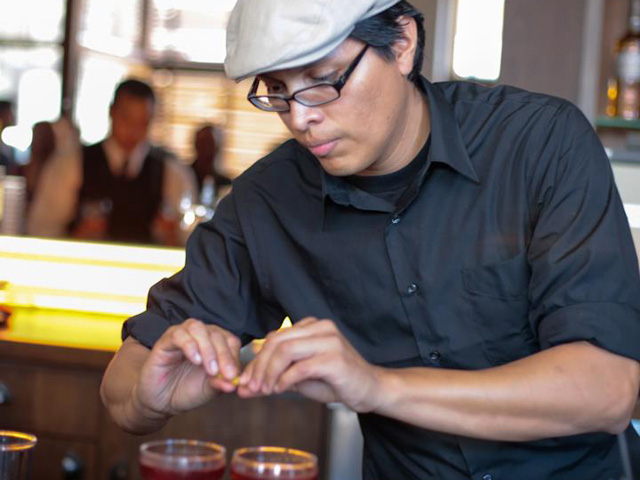 First, a HUGE thank you to the crew at Sadie Kitchen & Lounge, the spectacular venue where ABTG took place. Sadie’s Director of Spirits Giovanni Martinez and bartender Greg Bryson were behind the stick for a special edition of Sporting Life prior to our event, and they were at Sadie well past the end. From planning meetings to event staging, Team Sadie (Patrick Doherty, Melissa Goodman, Samanta Olea and Faris Simon) made sure everything ran smoothly and ensured our guests had an enjoyable experience throughout the day. I hear that chef Mark Gold’s appetizers were top notch, though I didn’t get to sample any of them.

Lawrence Moore and Joshua Fanning of Lawrence Moore & Associates did a superb job of getting the word out about ABTG. Lawrence worked tirelessly within a short time window and the next thing you know, ABTG was in the LA Times, among numerous other media outlets. She also made the intro to smartwater, which donated plenty of product to keep our guests hydrated, always a critical component for an open-bar drink fest but especially on an 80-degree day. Lawrence also facilitated Christina Czybik’s donation of a framed double exposure print to the silent auction.

Jen Len and Matt Talbert’s “With a Twist”

Speaking of the silent auction, a shout out to Matt Talbert (aka The Old Fashioned Artist), who reached out and donated the first auction item, a limited edition, framed canvas print of his most popular painting, With a Twist. Congrats to Jen Len (Drago Centro) on the winning bid!

It’s impossible to overstate the contribution from Dave Stolte of Home Bar Basics, who designed the fantastic ABTG logo that caught everyone’s eye the moment it was released. He was at Sadie bright and early for Sporting Life, and stayed through the end to help with cleanup and load out. Did I mention he lives in Murrieta? 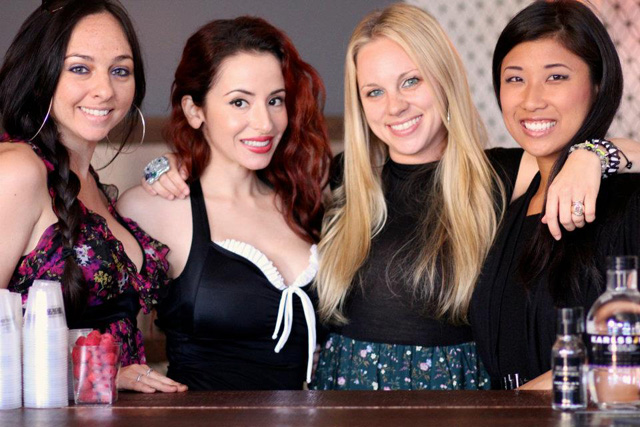 Not only did Henry Wine Group’s Mollie Casey donate one of her special dinner events to the silent auction, but a few days before the event she introduced us to Jesse Honig, a sound engineer who volunteered his services for the day. Performers and guests alike praised the sound on the patio, and we have Jesse to thank for handling everything.

And finally, what can I say about Zahra Bates, bar manager at Providence and co-founder of Art Beyond the Glass. I’m truly fortunate to call her a friend, and I’m honored that this blog is the first to publish her writing. I couldn’t begin to describe the creativity, enthusiasm, intense focus and relentless positivity that she brought to the ABTG project, all while working long hours at Providence. Her guest post conveys much about the passion and dedication she brings to her craft. But to paraphrase her, it’s one thing to read about Zahra’s cocktails; it’s something else entirely to experience the artistry of her drinks in person. Whether it’s at Providence or elsewhere, I can’t recommend this highly enough. You will not find a more staunch advocate and eloquent supporter of this city and its bartenders, and it’s a testament to the love and respect (and in some cases, awe) that she inspires from her peers that so many of them were eager to work with her on ABTG. 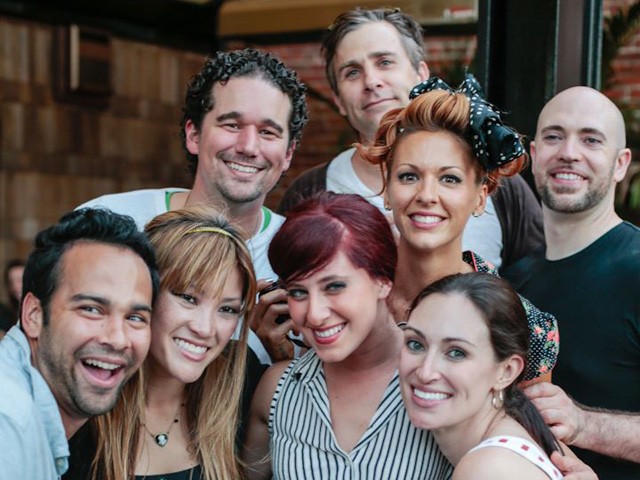 As Zahra mentions in her letter, the unofficial theme of ABTG was community, and time and again Los Angeles stepped up and demonstrated why this city is so special. From the moment ABTG was announced, there was an outpouring of support from the LA cocktail community and beyond that was overwhelming and humbling. It didn’t matter that ABTG was taking place on the only day off for most bartenders (and on Father’s Day, no less). The offers of help were constant and unconditional, with so many bartenders and friends saying simply, “Whatever you need, just let me know.”

These words were echoed by Del Maguey founder Ron Cooper, who was an inspiration from the project’s inception. He seemed to magically appear when needed; I’m sure I’m not the only one who has noticed this phenomenon. The first time this happened was at a special event at Playa, the day after we compiled an ABTG wishlist with Ron and Del Maguey at the top. I described the ABTG concept to him at Playa and Ron offered his help without hesitation. Some time subsequently passed without hearing back from him, so we figured he was too busy. And then the weekend before the event, Ron emailed us, not only to follow up and arrange for product, but to donate two special bottles for our raffle as well. The fact that he contacted us the day after we sipped Chichicapa (twice) tells me there are ways to reach Ron Cooper that are far more effective than email.

One of the supposed knocks against LA that I’ve heard over the years is that it’s so spread out, you have to drive everywhere, there’s no “there” there, etc. I would argue that it’s that very diversity, the remarkable patchwork quilt of neighborhoods waiting to be explored in this 500 square-mile metropolis, that makes LA so exciting. The same can be said of the vibrant cocktail scene, which is still growing by leaps and bounds with no signs of letting up. What began several years ago in the Historic Core has blossomed into a thriving cocktail culture where a great drink can be enjoyed at a bar down the street, not just across town.

It was essential for ABTG to include bartenders from bars in every part of the city, and with participants hailing from the Westside to Pasadena, and even south to Long Beach and Seal Beach, ABTG was successful on that count. It was a singular gathering of LA bartenders that made for an embarrassment of riches when we outlined the schedule for the day. Many of them had never worked together before, some were meeting in person for the first time, and everywhere you looked, something amazing was happening behind the bar as bartenders would riff off each other. 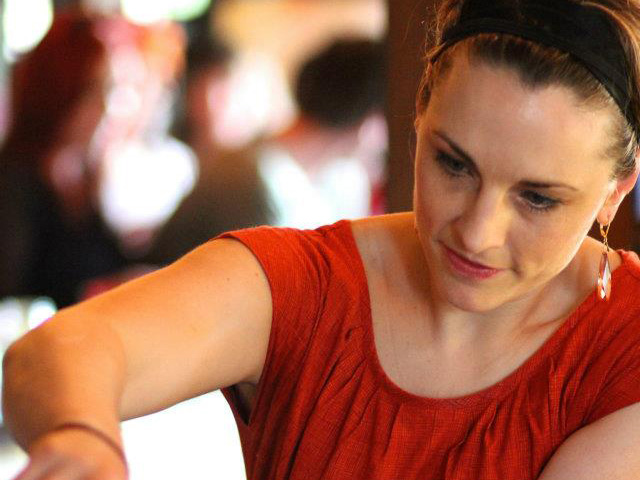 A planning meeting with Cole’s bar manager Brent Falco about a month before the event (on World Cocktail Day, natch) would prove to be a pivotal one. She brought a fresh eye and an experienced approach to work on the budget, laid out key components of the event, then procured hundreds of dollars in 213 Nightlife raffle items, fought mad traffic to pick up ice on event day, and served the excellent Pancho Smoking Gun: mezcal; Peychauds and grapefruit bitters; agave infused with habanero and jalapeño; stirred over a big ice cube and garnished with grapefruit zest. 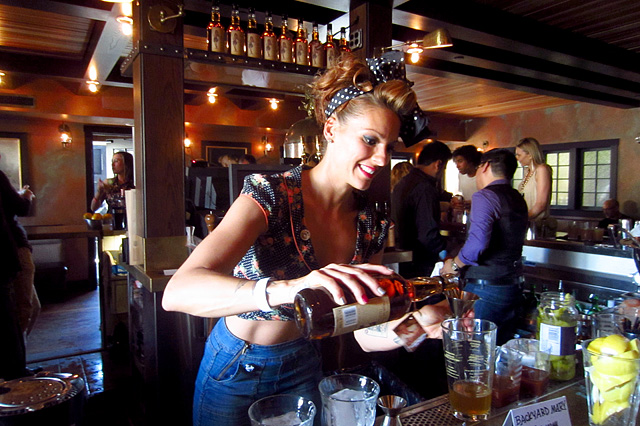 The fabulous Mia Sarazen (Areal) was another key figure: she facilitated the Sailor Jerry sponsorship, showcased her photography in the Parlour, and in the central bar (along with Playa‘s Karen Grill and Mia Mastroianni of Soho House) she served Sailor Jerry Punch and two of her creations, the Badass of the Caribbean (a rum Old Fashioned made with Sailor Jerry, The Balvenie Caribbean Cask, sage honey, Miracle Mile Toasted Pecan Bitters) and the Backyard Mary (a Bloody Mary variation with Sailor Jerry, heirloom tomato, Tabasco, black pepper, honey, beer, BBQ sauce, bacon garnish).

It’s been well-documented that ABTG began with a conversation at Sunny Spot, and Brian Butler’s cocktails were the catalyst. Brian was one of the first bartenders-artists to arrive at ABTG and one of the last people to leave Sadie later that night. In between, he was seemingly everywhere, whether it was in the central bar making his La Estrella cocktail (Atlantico Platino, Pierre Ferrand Dry Curaçao, honey syrup, lime, absinthe, creole bitters) or getting into the groove in the Parlour. 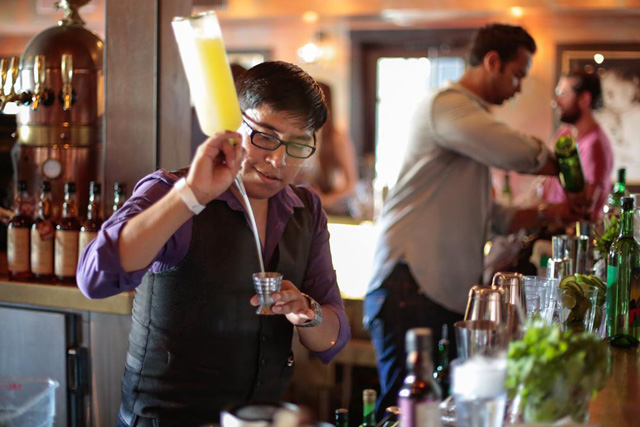 More cocktail highlights, plus recipes from Matt Biancaniello and Jason Schiffer, after the jump. 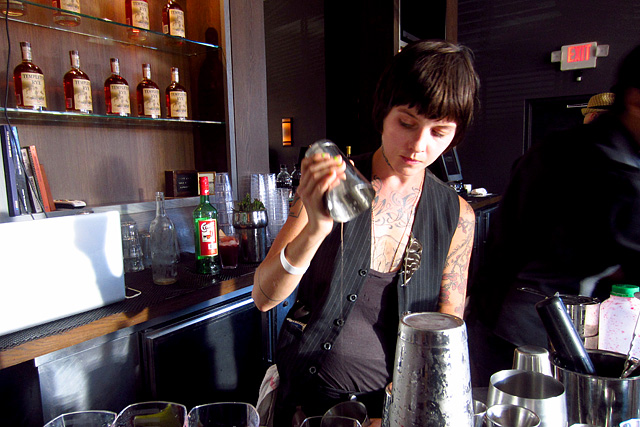 I’m so glad that Eveleigh Bar Manager Dave Kupchinsky suggested that we contact one of his bartenders, China Morbosa, whom he described as “an incredible artist and musician.” I saw some of her artwork online, but it wasn’t until the day of the event that I finally got to view her exceptional pieces in person. And after seeing China’s band Dead Dawn perform a few days after ABTG, I’m making a shameless plea to get our first band lined up for ABTG II. 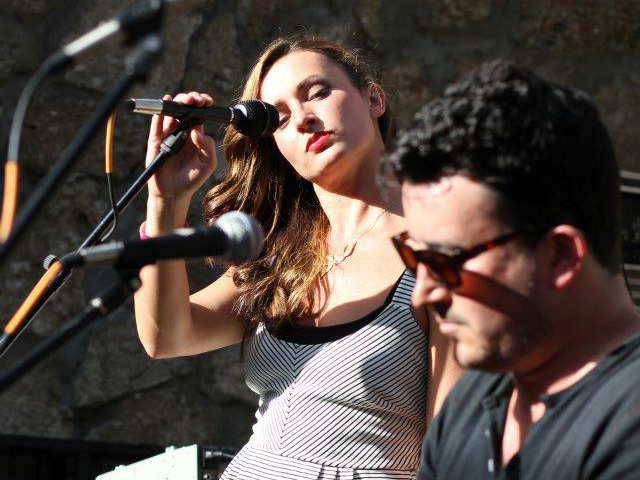 A shoe-in for a return gig is the brother and sister duo of Lauren and Erik Trickett (roe.). Zahra said she was taking care of something and literally stopped in her tracks when she heard them. I was inside and assumed one of our patio DJs was playing a soul track; I was blown away when I realized that it was in fact the Tricketts who were singing. 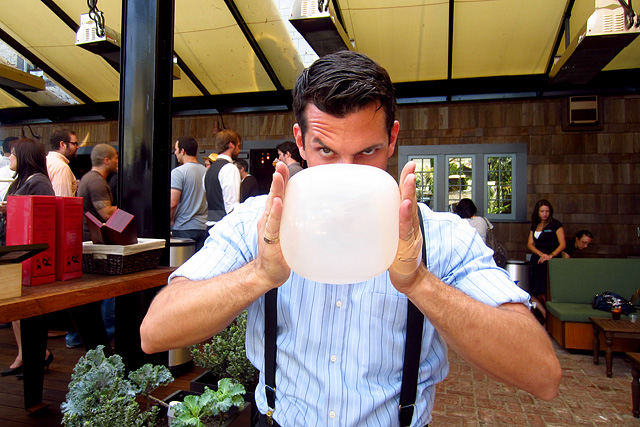 Sure, you can claim your cocktail party was magical, but did you have an actual magic show, as seen at the world-famous Magic Castle? Josh Lucas (also of The Writer’s Room) had just flown back from Israel that day, and he never let the jet lag show while he performed a wonderfully irreverent magic act that climaxed with a card trick / homage to GOB (of Arrested Development fame).

I’m surprised there was anything left of the Parlour after the Pour Vous tag team duo of Dave Fernie and Steve Livigni was finished burning it down. Back in the day, those were the nights that I lived for as a DJ, when everything came together and the crowd, music and vibe kept building to a crescendo. As anyone who was there at the end of ABTG will tell you, the Parlour absolutely exploded with feel-good energy, and I will put that set up right up there with some of the best I’ve ever experienced. 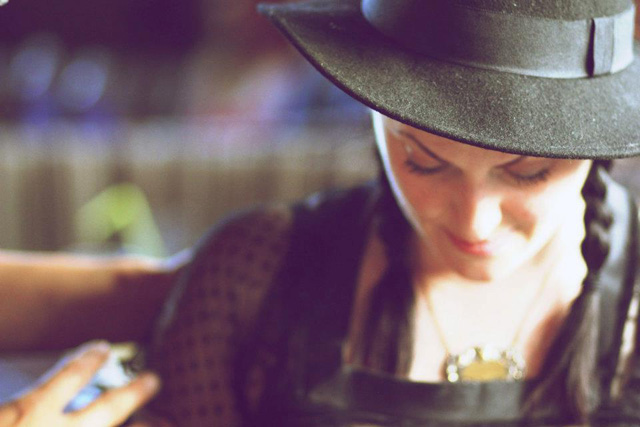 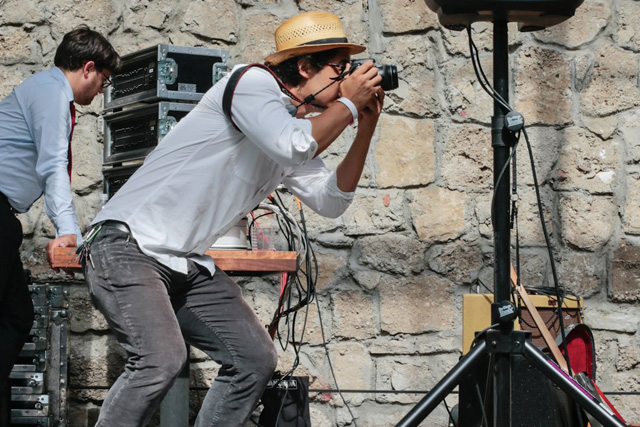 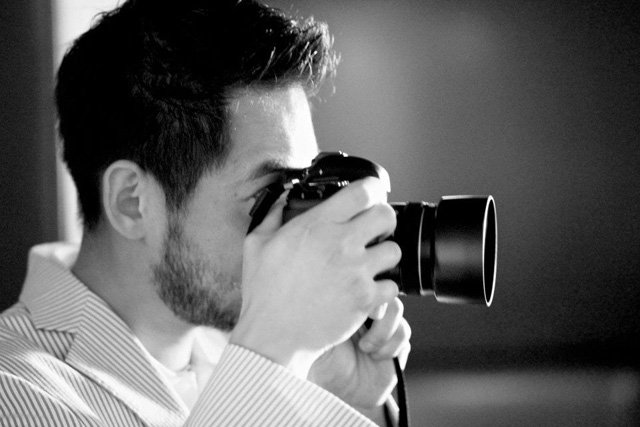 Note to self: ABTG II will need a separate exhibit that features nothing but the superb photos that Eugene Lee (Big Bar) and Tatsu Oiye (A-Frame) took of the inaugural ABTG. Zahra picked a set of her favorites for her post, and several more are featured in this article. Their photos demonstrate yet again the level of artistic talent that’s in this community.

Pablo Moix (Pour Vous) spent the entire day on the patio, working on his live graffiti art even after the sun had set. As promised, at the end of the event he broke up the finished 6’x9′ canvas and gave out pieces of his artwork to the remaining guests. It’s definitely the coolest event keepsake I’ve ever received; now to figure out where to hang it. 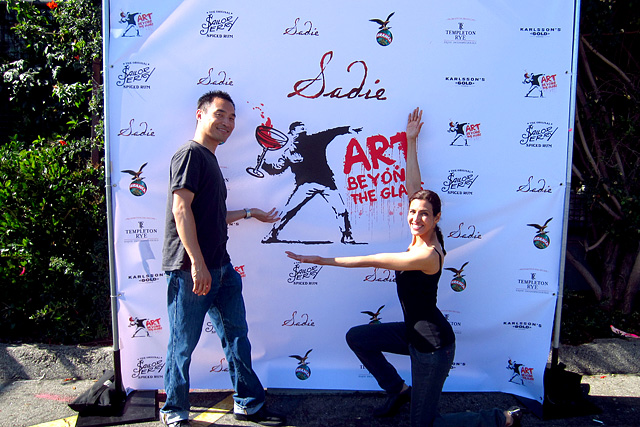 I’ve got the Step and Repeat at home, too. We just have to invite the exact same sponsors for ABTG II.

Capturing lightning in a bottle again can be elusive, but everyone from participants and brands to guests have been clamoring for an encore. Other cities have invited us to take ABTG on the road, as well. We had hoped that if the first ABTG was successful, it could be a platform for something much more than a one-off event. And the end result went far beyond my wildest expectations. Whatever else happens with Art Beyond the Glass, I will never forget what we accomplished on June 17, 2012. 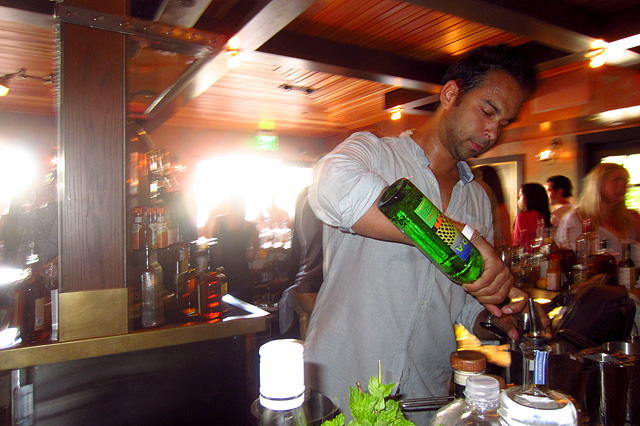 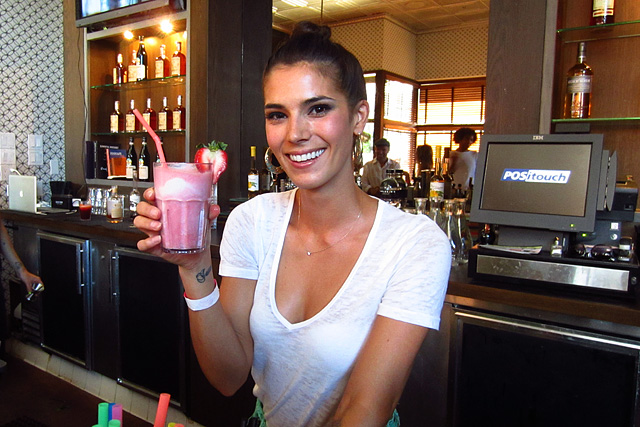 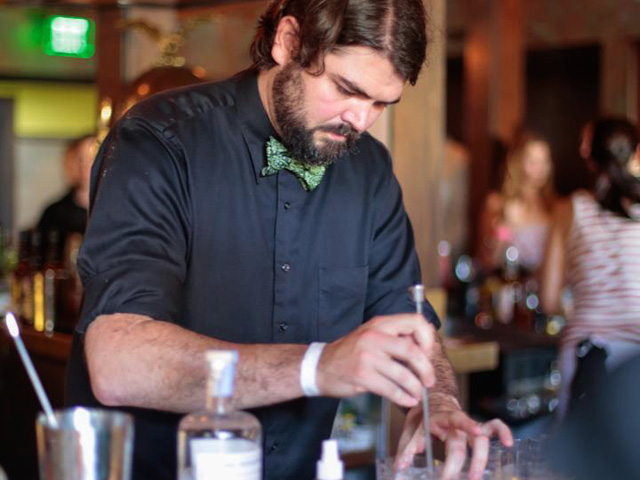