Wolf in Sheep’s Clothing: Brunch on the Coolest Block in America

In its first-ever Style Bible issue this past spring, GQ named Abbot Kinney Boulevard “The Coolest Block in America.” The Abbot Kinney dining scene has been thriving for some time, from Casey Lane’s acclaimed The Tasting Kitchen to veterans like Joe’s Restaurant, which celebrated its 20th anniversary last year. The latest restaurant to debut on this red hot Venice street is Wolf in Sheep’s Clothing (WiSC), which began as a pop-up at Capri down the street before opening in October in the former Lilly’s space. Owner John Mascarenhas partnered with restaurateur Brad Johnson (Post & Beam) for this incarnation of WiSC, which features Executive Chef Kevin Kathman’s Southern-inspired menu, a nod to Mascarenhas’ upbringing. The classically-trained Kathman most recently helmed the kitchen at Barbette in Minneapolis. Previous stints include Daniel and Gramercy Tavern in New York City, as well as three years at The French Laundry.

The Wolf in Sheep’s Clothing cocktail and spirits program was created by Daniel Nelson of the Writer’s Room, featuring a selection of single-batch ryes, bourbons, scotches and tequila as well as his concise cocktail list. Nelson was brought on board the WiSC project by Johnson, a longtime friend who first came to LA in 1989 and was a partner in the original Roxbury nightclub on the Sunset Strip (yes, that one) as well as Georgia and BLT Steak.

About a month after it opened, WiSC launched a weekend brunch, served on Saturday and Sunday from 10am to 3pm. At a hosted tasting of the new brunch menu, I was joined by Aggi Roselli of Java Juice, Bricia Lopez (Guelaguetza), Joe Moller (Moller Entertainment Group) and Nelson, looking dapper as always on an overcast Saturday morning. 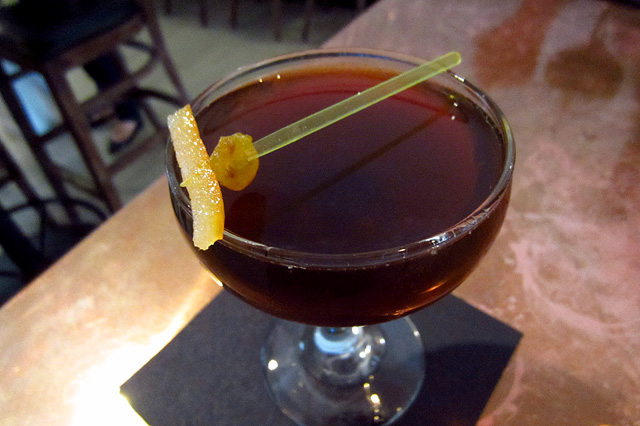 WiSC bar manager Josh Curtis was behind the stick for the tasting, which got off to a proper start with the High Test Old Fashioned, made with Café du Monde-infused Evan Williams Bourbon, sugar and bitters, garnished with candied orange and a golden raisin. Nelson said the bourbon is infused with the dark roasted coffee and chicory for about 24 hours, which lends it wonderful bittersweet chocolate notes.

The Car Car (named after Mascarenhas’ girlfriend Carla) is made with Damrak Gin, jicama, ginger, apple, kaffir lime leaf, and anise seed. Curtis said this cocktail has been doing very well right out of the gate; guests have said they love it. Produced by Lucas Bols from a recipe that dates back to the 1700s, the Damrak provides a complex, unique base that’s situated between a traditional London Dry and a genever.

Shrimp and Cheddar Grits with Bacon and Scallion

An exemplary Fried Chicken and Waffles is de rigueur for a Los Angeles brunch these days, and WiSC’s delivers: the chicken is moist and tender, the skin crispy and well-seasoned. Spoon some of the rich maple butter over the dish (or in your mouth, if you’re among friends) and tuck into a fried chicken and waffles that challenges The Tasting Kitchen version for Abbot Kinney supremacy.

Tex-Mex influenced plates like Chilaquiles with Smoked Chicken or the Green Chili Pork Shoulder with Eggs and Tortillas call for the DM Wow: La Puritita Verda Mezcal, ginger syrup, lime, agave syrup and orange bitters. La Puritita Verda is an approachable mezcal from Pierdre Almas, very soft yet with enough smoke to let you know it’s there. The DM Wow, named as a nod to one of WiSC’s investors, is ideal for those who are unfamiliar with mezcal or for those aficionados who don’t need the horsepower of other Pierdre Almas releases on a lazy Sunday morning. 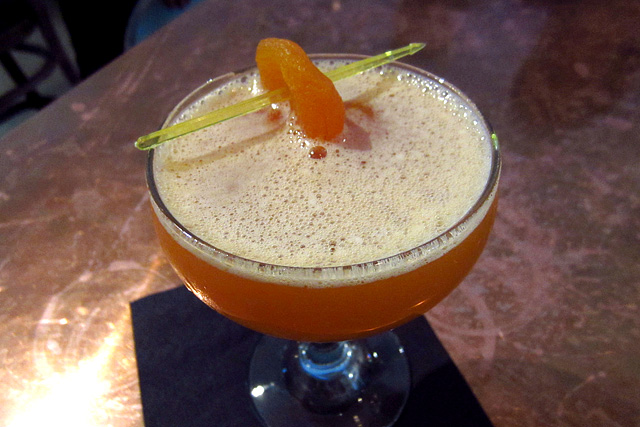 The Cosmo Killer, made with Reyka Vodka, pomegranate molasses, apricot and lime is pitch perfect for brunch, a crowd pleasing sipper with depth that will likely give the Car Car a run for its money in the popularity department. The same can be said for the Wolf in Sheep’s Clothing brunch itself, a rustic yet sophisticated menu with wide appeal, executed with considerable skill.