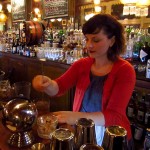 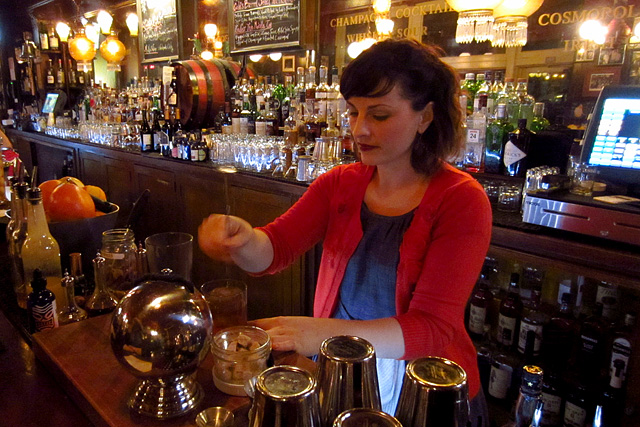 If you haven’t been to Cole’s lately, or if you’ve never had a drink at the oldest public house in Los Angeles, there’s never been a better time to head downtown and belly up to the Red Car Bar. In addition to physical improvements to the bar itself, bar manager Brent Falco has quietly assembled a formidable lineup of bartenders: former Providence bar manager Zahra Bates, former 1886 bartender Danny Cymbal, Cari Hah (Neat) and Garrett McKechnie, the former 1886 bar manager who is currently consulting on projects with Tello Demarest Liquid Assets.

It’s the culmination of years of efforts from one of the unsung heroes of the LA cocktail scene. Falco, who is consulting with Tello Demarest on an upcoming bar in Calabasas, began her professional relationship with Tello Demarest in 2010, when she had just started working at Cole’s. “My father was ill at the time, so I had a lot on my mind. I just put everything into work. Marcos [Tello] was really influential on what happened afterwards, he was always available to talk to me or to offer advice.” Tello’s counsel, as well as her shifts working with Cymbal, had its impact. “You could say that in some ways, Cole’s is almost an extension of Tello Demarest.” By way of example she pantomimed the elegant free pour and cut that’s familiar to any 1886 regular.

The most obvious change that’s taken place under Falco’s watch is the recently added service well at the near corner of the Red Car Bar. The expansion didn’t happen overnight; “Cole’s is historic, you can’t just start cutting into it.” In addition to Tello, Falco sought opinions from The Varnish co-owner Eric Alperin and Alex Day (Proprietors LLC) about the buildout. Falco had to be persistent in seeing the project to its completion through the two-year process, but she said, “I had a vision. I needed a service well. Cedd [Moses, 213 Nightlife proprietor] is a numbers guy, so if you have the answers for him you will get the respect.”

Falco’s tenure as bar manager has given her a clear and in-depth understanding of what Cole’s is and what it’s not. She emphasized that Cole’s is inspired by, not trying to be The Varnish. She continued, “Cole’s is that beautiful ‘in-between’ bar and restaurant. Let’s not kid ourselves, we sell French Dips. But we’ll never be a Turn and Burn,” referring to the restaurant term for getting customers in, getting them fed and getting them out as fast as possible. “The bar was what kept Cole’s alive all these years. It will always be a Cheers in some sense.”

When asked how her all-star bartender team came together, Falco said simply, “I went after them.” Each member of her crew brings something different to the table. Falco described McKechnie as “Mr. Scientist,” someone with “endless enthusiasm” as well as a love and appreciation for amari that adds another dimension to the mix. As for Hah, “There are no boundaries with Cari. She brought her passion for tequila and mezcal, and her sangritas, and she’s been educating customers and staff. There were some agave spirits sitting on the shelf, and now because of her they’re moving.” 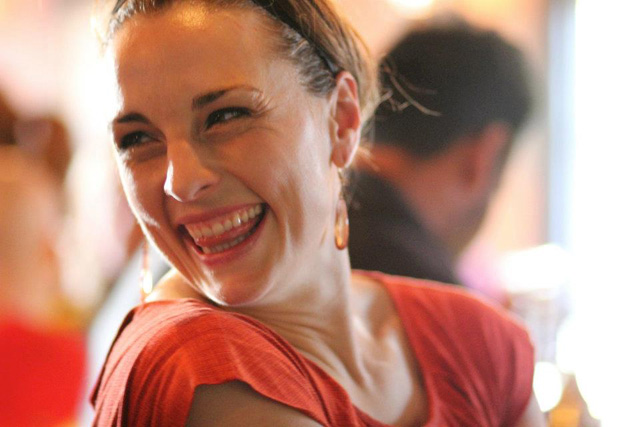 Brent Falco at Art Beyond the Glass | Photo by Eugene Lee

For her part, Hah wasn’t looking for work at another bar, but when Falco approached her about possibly taking shifts at Cole’s, she said, “I couldn’t pass up the chance to work with her. Brent is one of the most genuine, hardest working women in the LA industry. She is confident and generous with her knowledge, but humble and eager to learn what other people have to offer as well. I don’t have anybody I consider a mentor, but when I do have questions about techniques/ingredients/life she is one of the very few people I feel comfortable going to.”

“My nights behind the bar with Brent are so fun, even when it’s tough, crazy crowds and mean customers, it doesn’t even matter because I get to look to my left and see my girl in the trenches with me. I have learned so much about customer service and presentation from her.”

Falco was accepted to the Cocktail Apprentice Program (CAP) at Tales of the Cocktail in 2011, the year before Hah and her Lil’ Twisted Sangrita partner Jaymee Mandeville (Drago Centro) were selected. “(Brent) was also instrumental in me having a bitchin’ time in NOLA because she had done the CAP program the year previous and gave me a lot of advice and tips about Tales. She has elevated the bar program at Cole’s so much and now it’s not just a waiting room for the back bar, but an actual destination people seek out. She’s very detail oriented and runs a tight ship. I’m so lucky to be working with her, and even luckier to count her as a true friend.”

The attention to detail that Hah mentions, along with Falco’s mindful approach to her craft, becomes readily apparent when talking with Falco. As she discussed the bartender-guest relationship, she emphasized her points with deliberate, precise motions of her hands.

“Everything is a gift, from bartender to customer. No matter what mood the bartender’s in, the goal is to make the guest happy. Knowing this helps me keep my focus. One cocktail, one thought. It’s about the conversation that’s happening on both sides of the bar. You know you’re doing something right when a customer comes back, points to the menu and says, ‘I want this cocktail.’”

She noted the little things that go into every “conversation,” how the size of the ice cube she just chipped or the sweetness of that day’s batched simple syrup will subtly alter how she’ll prepare a drink. Or how she’ll start the stir at the bottom of the Collins glass and gradually move up. “Thoughts influence action and results,” she said. “Our approaches are similar in so many ways, that’s why Zahra is a soul mate to me.” 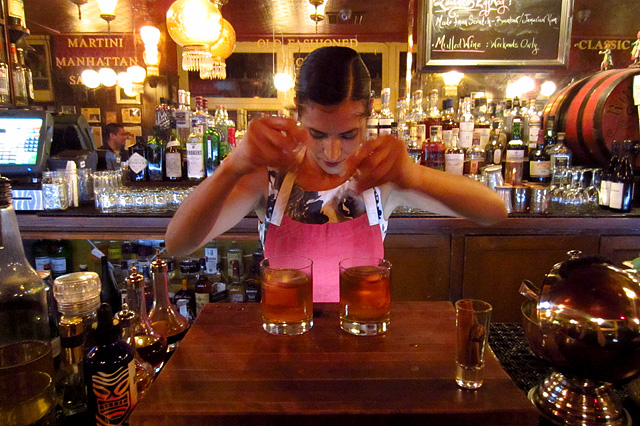 When word began to circulate that Bates was leaving Providence, speculation ran wild as to her next gig. A conversation at Harvard & Stone led to Bates joining the Cole’s team on the spot. “If we hadn’t talked that night at Harvard & Stone, there would have been a phone call,” Falco said. “I wanted Zahra’s energy, that amazing focus. There’s her movement when she’s behind the bar. And of course that fine dining experience, it’s great that the younger staff can learn from her.”

What was it about Cole’s and working with Falco that appealed to Bates, who by all accounts could have picked any bar she wanted? “Where do I start. First and foremost she is an incredible person who gives so much of herself to everyone in her life. The amount of time she spends on building up her team and trying everything she can to give them room for growth is humbling and inspirational in equal measure.”

“Then there is the enormous amount of energy and passion she brings to the community as a whole. She is always finding new ways to contribute and helping to give opportunities to our local bartenders, whether she is helping someone source ice for their event or taking time to have a quiet word with someone who can use a little guidance on a cocktail or in their career.”

Bates said that Falco is an “incredibly talented” bartender, “not just her delectable drinks but also in her generosity of spirit and in the genuine care that she gives to all of the people that come and sit before her at Cole’s. Yes I gush but I can’t help it, she has invited me into her world and behind her bar and I am incredibly grateful.”

To underscore Bates’ point about Falco’s generosity with her time, our conversation at one point turned to Edwin Gomez, who recently placed second in the 4th Annual Jimmy Barella Bartending Competition. Falco first met Gomez when they were both at First & Hope. “The way he cut his ice, I thought, ‘This guy is not a busser, he’s a barback.’ He started out as a pouring barback. Little by little, he would learn. On a slow day, I’d tell him, ‘Make this, make that.’” With obvious pride, Falco said, “Edwin will be a beautiful bartender.” 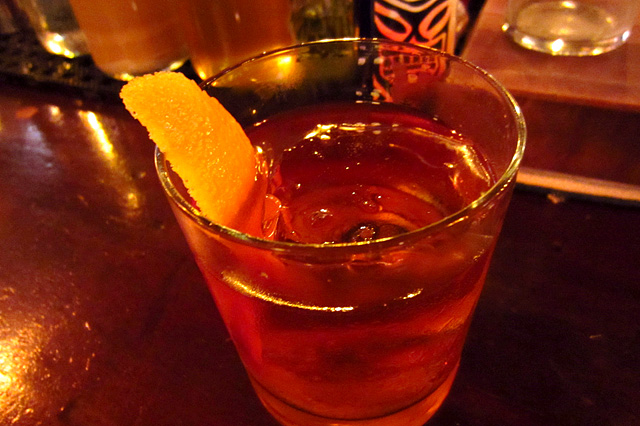 Falco is still behind the bar, but not constantly as she was before, thanks in part to Bates and Cymbal taking single manager shifts here and there. “I won’t be at Cole’s forever, but whoever steps in after me has to understand its history and the story. It needs to be in the hands of someone who understands the details. They have to preserve the bar.” She adds, “The rest of it might all go away, but if anything is left standing it will be the Old Fashioned.” The classic Cole’s version is made with Old Crow Kentucky Straight Bourbon, a favorite of Ulysses S. Grant, Mark Twain and Hunter S. Thompson. (Tip of the hat to anyone who knows where to find the tuxedoed crow inside Cole’s.) Also currently on the menu is the outstanding Cole’s Barrel-Select Old Fashioned, made with single-barrel Buffalo Trace Bourbon selected by Cole’s bartenders.

The cocktail menu doesn’t change often, and Cole’s “will always be a stirred cocktail place,” but Falco is confident that her team will expand the bar’s repertoire beyond her own personal favorites. Danny Cymbal’s Old Devil is a fine example, an Old Fashioned-style cocktail made with three rums (Smith & Cross, Sailor Jerry, Appleton 12-Year), Angostura and Tiki Bitters, a brown sugar cube and an orange peel.

Falco isn’t done with updates and improvements to the bar. “The Professionals” board of Cole’s regulars above the bar is making a comeback. She said the names on the board are Old Money types who worked in the Bank District. At one time there was a phone wire that went next door, where The Association bar is located today, so that business could be conducted at Cole’s. And starting in January, Falco is introducing Manic Mondays, when Cole’s bartenders get to play with the ingredient of the day, with no idea what it will be until they arrive for their shift. 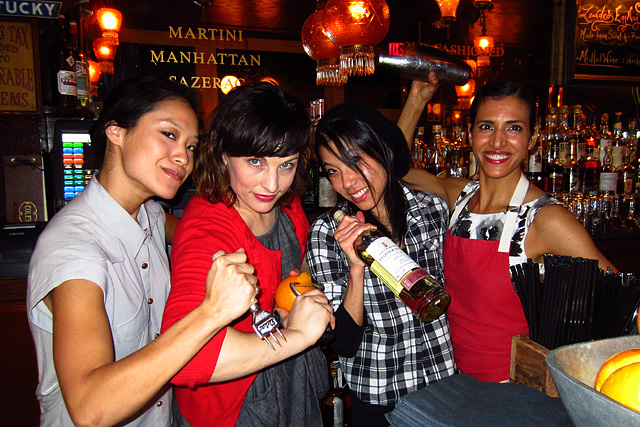 And then there’s the landmark event that’s taking place on Saturday, December 29th. For the first time in the 104-year history of Cole’s, an all-female bar team will be working at the Red Car Bar: Brent Falco, Cari Hah, Zahra Bates and superstar barback Yvonne Chu. The event, affectionately dubbed The Mayans Were Wrong, is being held in honor of Chu, who is undergoing knee surgery the following week. Besides the home team, Falco is extending an open invitation to female bartenders across the city who want to take a turn behind the stick that night.

“Epic” is a word that gets thrown around far too easily these days, and the Old Fashioned will outlive us all. But let the record show that December 29, 2012 is a night destined to go down in Cole’s history and is certain to become an enduring part of Brent Falco’s growing legacy.