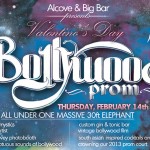 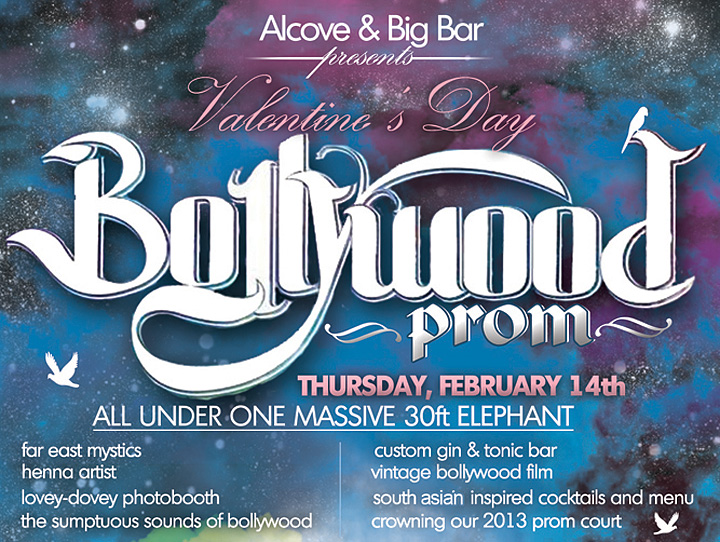 On Thursday, February 14th, Big Bar at Alcove is pulling out all the stops for what promises to be its most spectacular Valentine’s Day event yet, the Big Bar Bollywood Prom. For this third annual edition of its Valentine’s Day-high school prom mash-up, bartenders Dan Long and Eugene Lee are featuring themed offerings such as a South Asian-inspired cocktails and bar bites menu, “Far East mystics,” a henna artist, a photobooth and prom photographer “to catch you in your awkward poses,” vintage Bollywood films, a custom Gin and Tonic bar, and much more.

And when they say “much more,” Long and Lee aren’t kidding around; the whole event is taking place under a “massive 30-foot elephant.” One can only hope that Long and Lee haven’t started dabbling in genetic engineering and the prodigious pachyderm is of the inflatable kind.

As with previous years, Big Bar will be crowning a Prom King and Queen (or King and King, or Queen and Queen). To be chosen for the court, post the following info to the Big Bar Facebook page: why you think you should be part of the court, your favorite prom song, and whether you are coming as a couple (include your date’s info) or stag. The Prom Court will be announced on Monday, February 11th and the Royal Couple will be crowned the night of the Bollywood Prom.