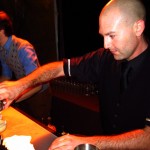 The Malt Family of Cocktails: The Four Elements of Beer 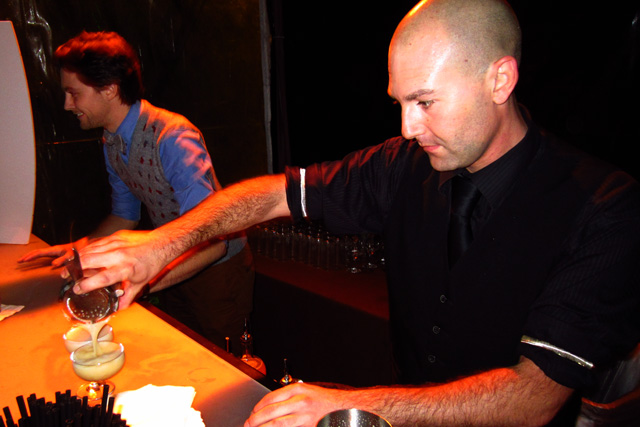 Brady Weise is the malt family cocktail maestro at 1886 Bar at The Raymond. In this first of a series, Weise goes back to the basics and discusses the four elements of beer, and how they can be used to their greatest advantage in craft cocktails.

In many ways, beer is our national beverage. It’s enjoyed in bars, taverns, restaurants and cafés across our nation. We drink it in nearly every situation imaginable, from parties to wakes. Beer is a time-honored tradition across great empires. Revolutions were founded on beer and founded by beer—it was the pastime of Jefferson and Adams. But not many of us stop and really look at the science of beer. How is it made? Who designs these glasses of lager, these bitter ales?

I believe that brewers at heart are chemists. They tinker with flavor, they toil over taste. They are the creators of all things simple, and yet, profound. According to tradition, there are four elements of beer that give it life: malt (sugar), water, yeast, and hops. These are the building blocks of most modern brews. Good beer, and in fact all beer, is the balance between five senses. We eat with our eyes, taste with our tongue, hear the bubbles, feel the cool glass, smell the bittersweet aroma. As with any other craft beverage or food, beer is a work of art that takes years to master, and a lifetime to perfect.

Many people think of beer as one of two things—a beverage only enjoyed by hop loving bitter drinkers, or a light lager to consume at the end of a night of hard drinking to bring the party down to an even keel. But beer can be, and is, much more than that. The elements that make up beer are the basis for both food and distilled spirits alike. The sugar, even after fermenting, contains starches and trace minerals that in small quantities are good nourishment for the body. Hops, the primary spice in beer, have a sedative effect, calming rattled nerves and souls. Yeast is a beneficial microorganism that promotes good digestive health and has a host of other benefits. And beer is mostly made up of water, so it is less dehydrating than other forms of drink.

Long history aside, today’s confluence of styles of extreme flavor is the result of homebrewers, hobbyists at first, seeking out flavors and styles that American Adjunct Lagers (i.e. the stuff that comes in primarily red and blue cartons in major supermarkets) couldn’t satisfy. During the early 60’s and late 70’s, beer markets were shrinking fast, and mega-brewers needed a way to retain profits. Using non-traditional, and mostly government-subsidized, ingredients was the way to do that.  During the late 80’s and early 90’s, we saw a rise in small breweries that were pushing for a segment of the market that was not being fulfilled, hence Stone IPA and Sam Adams Boston Lager. IPA’s became the order of the day in large part because they were bold in flavor and attracted beer-centric drinkers. As the market began to diversify more and more, we started seeing a change from IPA’s and light lagers to a wider range of styles such as Belgian beers, Bavarian Hefeweizens, and cross styles such as American Sour Ales, or Belgian IPA’s. In short, what we are experiencing now is a new age in American brewing—just as we have fusion cuisine, we are likewise beginning to see the rise of fusion beer.

Beer fusion can be difficult to quantify, as even the governing bodies that define style in this country are somewhat vague about what truly defines a style, leaving room for interpretation. Purists believe that color, hop content, and yeast truly define a style. While this may seem obvious to some, in truth the waters are quite murky. Traditionally, Belgian beers tend to be higher in alcohol and lower in hop content than their German counterparts. But if you use a Belgian yeast with a German malt profile, have you re-defined a style, created one, or simply chosen a different spice for your beer?  While such questions are too involved to tackle here, they do present one immutable truth: beer is a cross between the science of fermentation and the culinary arts.  This has been a great boon for American brewers in particular, giving them the freedom to create and hone the American anything-goes style of matching Old World technique with New World artistic flair.

First and foremost, this blending and melding of styles is defining the new craft market by serving a bar’s clientele. Cocktail bars and beer bars are finding common ground, e.g. handles of local craft beers are showing up in craft cocktail bars, or high quality spirits are available in beer-focused bars. As this melding of bar categories progresses, it’s important for those of us in the beverage industry to recognize that some terms don’t directly translate when we move from the spirit world to the beer realm. IPA’s may be bitter, but in a different way than some bitter cocktails, like a Negroni. Those that love hops may not love Campari, even though they are both bitter elements in a drink—they are bitter for different reasons, as we shall see. 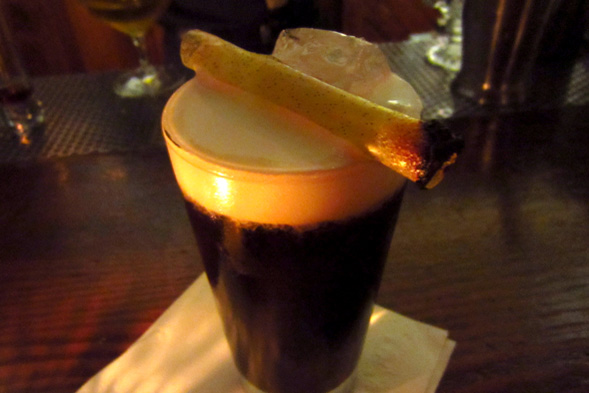 Secondly, bartenders around the nation are increasingly incorporating beer as an element in cocktails. Lagers and IPA’s are being used all too often, but not many styles of traditional, modern or in-between. This is unfortunate because beer can be one of our most useful tools—it’s an amaro shelf with an unending amount of ranges of style and flavor. For the same reason that some of us constantly scan catalogs from liquor providers for a new vermouth, bitters or fruit brandy, we should be doing the same from brewers’ beer lists.  It’s our job as professionals to try to utilize all the tools in our cabinet, not just those we are already familiar with. 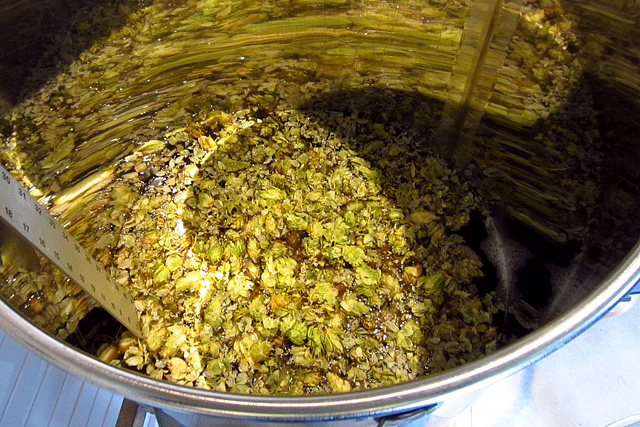 To find out what makes beer useful in cocktails, and why, let’s go back to basics. A cocktail is always comprised of four basic elements: liquor, sugar, bitter, and water. This harkens back to the hops, or bitter element, in beer. Hops differ in bitterness from bitter spirits in one major, and very significant way: they add more of a citric, or acidic, element to the drink.  Therefore, they won’t act as a traditional bitter spirit in a cocktail, rather as more of a citrus element. Anyone who has ever had a West Coast-style IPA can attest to this. The IPA’s bitter element relates more to grapefruit rind, or even pine sap or resin, rather than say aspirin, which would be more in line with a bitter liquor. This is extremely important, as you can replace not only certain elements of citrus with hops-heavy brews, but you are free to use some semi-bitter amari as well without damaging the profile of the cocktail. 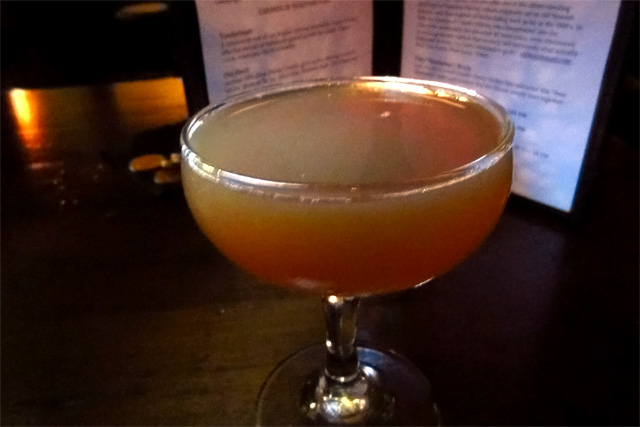 Texture is another important element, as it relates to our second point above. Adding beer to a highball to replace soda or tonic has its place, but what about stirring something with beer, as in a Manhattan? Or perhaps sours or fizzes? Adding a few ounces of beer to a stirred or heavily-shaken cocktail won’t damage your dilution rate, but it does affect one thing: texture. The malt in beer will slightly thicken the drink, conveying texture in much the same way we stir or add certain fats and proteins to a cocktail. The creamy mouth-feel of the natural thickness in the malt content of the beer, when used properly, will enhance this effect, even after the cocktail has warmed a bit.

A Bavarian hefeweizen will add a greater, creamier texture to any drink, but just like simple syrup, will add “fat” as well. This leads us to the conclusion that too much hefe can overtake the more delicate elements in a cocktail, muting the palate to some of the more delicate elements. One way that we can achieve balance with a hefe is to think of it more in terms of an egg white protein, or perhaps pineapple juice. A small amount can add to the flavors of a drink, while masking some of the more spirit forward notes. Traditional sours and Tiki cocktails are great uses for a Bavarian hefeweizen.

An extremely light beer can likewise be utilized. Take, for example, a Ramos Gin Fizz. Even with proper technique and the lowest dilution rate possible, the protein and fat elements of the drink are apparent after the second round has been consumed. Here is where a lighter malt beer can come into play. An English Black Mild, such as Guinness, is a perfect addition to this cocktail. Not only is the beer lighter in character, but the nitrogen mixture can replace the dairy or albumen in the drink, without adding too much of its own malty flavors. This gives the drinker the ability to contemplate some of the other notes that exist in the drink, as well as allow the beer to be displayed more prominently on the palate.

Yeast, although a necessary element in beer, must be carefully monitored in its use in cocktails. This is because yeast is a part of the beer’s profile, and cannot be removed or modified. We deal with this by matching yeast structure with spirit. Belgian sour ales are tough to pair with bourbon or gin, but are excellent to pair with vodka or tequila. This is because Belgian sour ales have a similar earth note found in agave spirits, and can be stretched out to reveal more of their elements via the vodka. This gives us the chance to utilize these spirits in new ways, as with fizzes or sours, containing egg and cream in the traditional style. With the fats in place, we are now ready to tackle the stronger flavors associated with these pairings. In this way, we can use the third element in beer to our advantage, as a boon to our somewhat open canvas, depending on the style.

This does beg the question, how does one begin to pair yeast and spirit?  Is there a dedicated formula, or is it trial and error?  The answer is a mix of both: some pairings may surprise you, others may confound you.  The core of the truth in pairing is either comparison or contrast. Beyond those simple boundaries, the canvas is open to a wide amount of artistic interpretation.

In future posts, we will dissect the reactions of beer in various ways, and how these elements can bring about a whole new range of ideas and opportunities. The most important point we can impart is that beer is a vital tool in the bartender’s repertoire, and it should have its place in our cocktail family tree, henceforth to be known as the Malt Family of Cocktails.