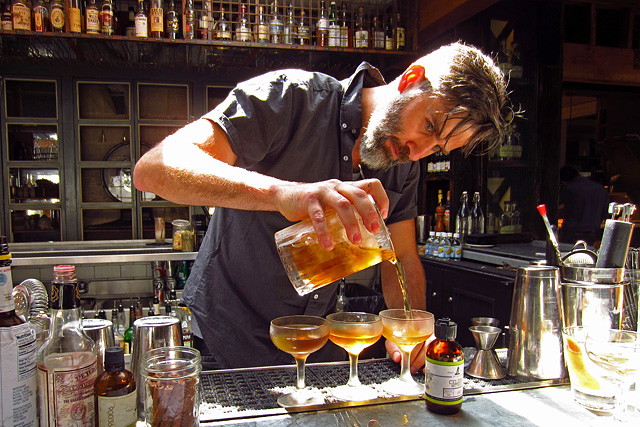 It’s the dog days of summer, and craft cocktail bars across the city are offering drinks that gravitate to the expected light and sweet flavor profiles on their seasonal menus. At Eveleigh in West Hollywood, Bar Manager Dave Kupchinsky has taken a different approach by prominently featuring aromatic cocktails on his menu, which went live last month. On a recent Sunday afternoon, Kupchinsky hosted a tasting of the summer menu at Eveleigh, where I was joined by fellow imbibers Caroline on Crack and Louis Anderman of Miracle Mile Bitters. 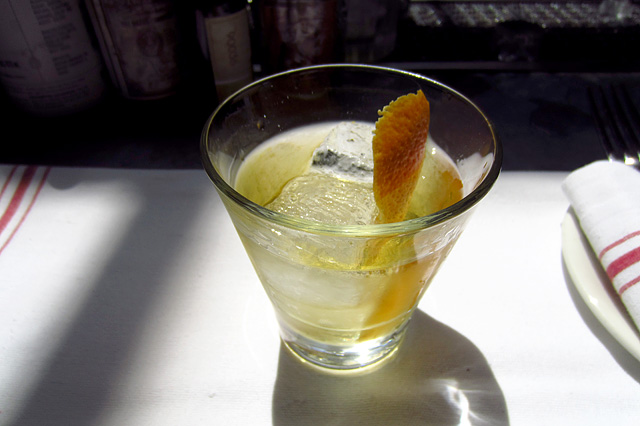 Oaxacan Angel: La Puritita Verda Mezcal, agave and Miracle Mile Castilian Bitters. To wake up our palates, Kupchinsky started with the Oaxacan Angel, a cocktail he first made during his stint at the Tar Pit. Kupchinsky said he’s really fond of the Oaxacan Angel and brings it back every summer. It’s a perfect example of his aromatic take on summer cocktails – the depth and smoke are there, but it’s bright and delicate, rather than heavy with winter spice like the ubiquitous mezcal Old Fashioned.

The Embury Cocktail: Plymouth Navy Strength Gin, Fino sherry, Yellow Chartreuse, Miracle Mile Yuzu Bitters. Kupchinsky began with the Nome – David Embury’s variation on the Alaska, from The Fine Art of Mixing Drinks – and barrel aged it for two months in new American oak. He noted that The Embury Cocktail wasn’t as chilled as we would expect for a Martini because he doesn’t stir it as long, opting for less dilution and a more spirit-forward cocktail. 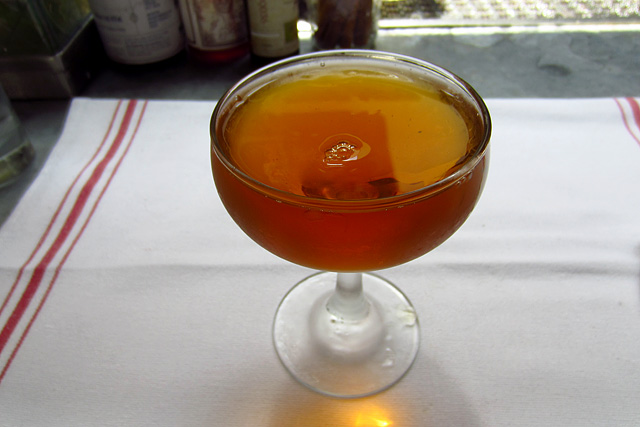 Song of Solomon: Willett 4-Year-Old Rye Whiskey, Vermouth de Chambery, Luxardo Maraschino, Cynar, Miracle Mile Celery Bitters. Kupchinsky was particularly excited about this “summer Manhattan,” which was initially inspired by the Bensonhurst. He spent two months in R&D, frustrated at not being able to nail down the recipe. At one point in the development process he asked Anderman for rhubarb bitters. Anderman delivered the request, along with a bottle of celery bitters that Kupchinsky promptly set aside. With just days before the summer menu had to go live, Kupchinsky lined up fifteen drinks and all of the bitters he had, including the celery bitters, which finally led to the Aha! moment that tied the cocktail together. The Song of Solomon is a superb sipper, remarkably balanced considering the horsepower of the 110-proof Willett. There’s an unexpected salty umami on the finish, and Anderman pointed out a hint of coconut that seemingly comes out of nowhere. 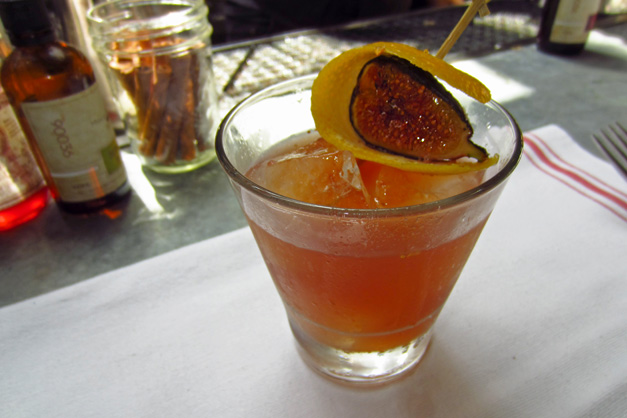 Grandma Helen’s Ye Ol’ Fashioned Pennsylvania Julep: Michter’s “US*1” Small Batch Original Sour Mash Whiskey, house-made apricot sugar, mint, allspice. Kupchinsky said he’s been on a kick of seasonal juleps, and for the summer he drew inspiration from his grandmother Helen, who’s been on his mind of late. Among a myriad of other fruit, there were apricot trees in her rural Pennsylvania yard. With a history that dates to 1753 in Schaefferstown, Pennsylvania, Michter’s was a natural fit as the base spirit for the julep. Kupchinsky is certain that no other bar is featuring the Michter’s Sour Mash on its cocktail menu. 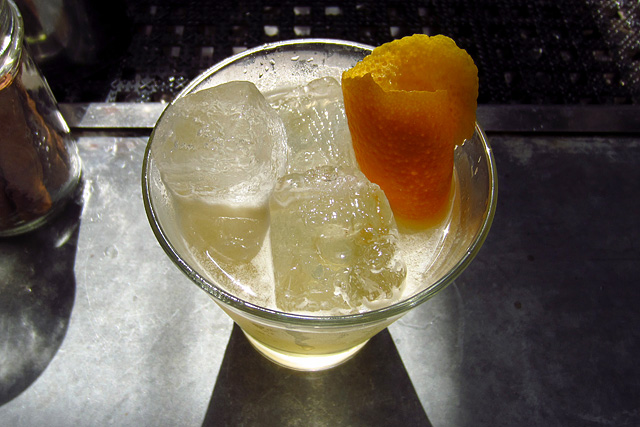 Summer Sour: bonded bourbon, Fino sherry, fresh lemon, cane sugar, orange essence. Kupchinsky said that this might be his favorite cocktail on the summer menu. He played around with the recipe quite a bit, kept coming back to it, and then simplified it. He noted that the orange twist is subtle, but really puts the Summer Sour over the top. We tried one cocktail without the twist, and then one with it, and sure enough it makes a substantial difference.

Eveleigh Lemonade: chamomile-infused tequila, Cocchi Americano, Combier, honey. Kupchinsky first made the Eveleigh Lemonade for the Combier-sponsored edition of the Sporting Life. He put it on the Eveleigh menu, it became huge seller, and it’s stayed on the menu ever since. 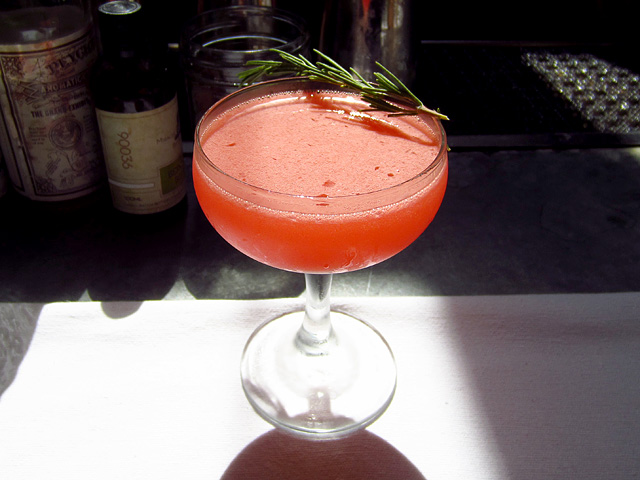 Mia Farrow: Beefeater Gin, Campari, rosemary, fresh lemon. The Mia Farrow started as the Rosemary’s Baby – with grapefruit instead of lemon – and is still featured on the brunch menu. 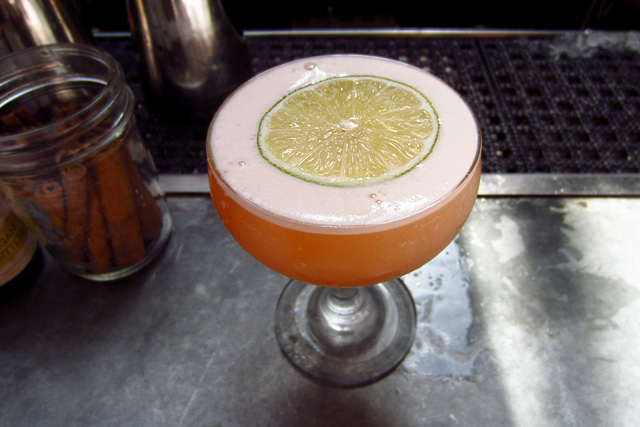 Hotel Nacional: Matusalem Platino, Blume Marillen Apricot Eau de Vie, fresh pineapple, fresh lime, cane sugar. Kupchinsky is justifiably proud of his version of the classic Cuban cocktail, making an old school “you can print that” boast that it’s the World’s Greatest Hotel Nacional, and challenging any bartender or cocktail geek to beat it. His use of the Blume Marillen instead of an apricot liqueur, as well as fresh pineapple instead of canned, are two of the reasons why Kupchinsky can claim the title. The challenge has been issued, let’s see who will step into the ring. 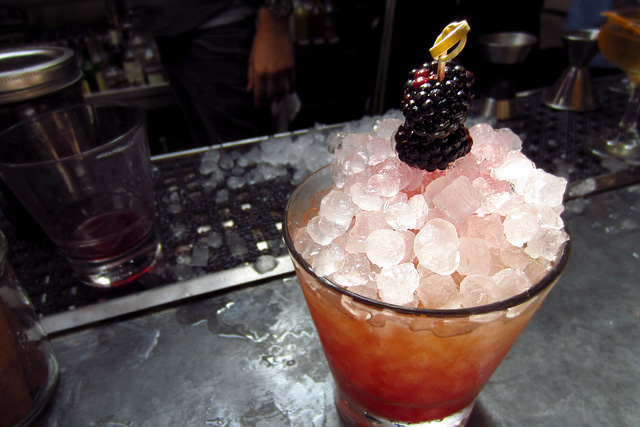 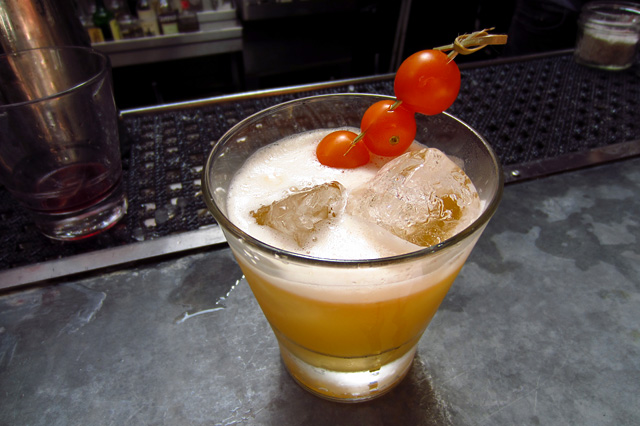 Mustache Ride: serrano-infused mezcal, Sun Gold heirloom gold tomatoes, smoked sea salt, lime, agave. Coming on the summer menu this week, the Mustache Ride is essentially a Tommy’s Margarita with mezcal and heirloom tomatoes. As Kupchinsky asked rhetorically, how could that be bad? The Mustache Ride benefits greatly from the use of the best ingredients at the height of their seasonality. And that means there’s no time like the present to sip one on Eveleigh’s gorgeous patio and start working your way through the rest of the outstanding summer menu.