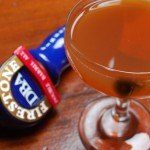 The Malt Family of Cocktails: Definitions and Uses of Malt in Cocktails

Brady Weise is the malt family cocktail maestro at 1886 Bar at The Raymond. In this second in a series, Weise presents an in-depth look at malt, different styles of beer, and examples of how they are used in craft cocktails.

Malt is the concentration of sugar and trace minerals, derived from cereal grains. It is the basis for most of what is required for spirits and beer alike. But malt is not as simple as it sounds. The production process of malt sugar first begins in the grains themselves – it is the food from which the young grain derives energy. This raw energy is captured when the grain is harvested just prior to adulthood. When the grain begins to germinate, or sprout, the malt sugar content is at its peak. Grains that produce the most sugar are typically wheat, corn, rice, barley and rye.

These grains are harvested at maturity and then dried. The drying process helps to fend off bacterial infection, as water is a breeding ground for most molds and other types of contaminants. In addition, drying ensures that the grain will remain – for lack of a better term – in suspended animation. Once the grains are dried and stored, their sugars are ready to be extracted through a process of re-hydration, or mashing.

Understanding the mash process is important, because each type of cereal grain has a different malt and mineral yield, and so the process of capturing their sugars affects the beer. Rye grains have one of the lowest sugar contents, but one of the highest mineral yields. Barley falls somewhere in the middle, whereas wheat, corn, and rice have the highest sugar but lowest mineral amounts. This gives us some insight into why certain beers act as they do when brewed, but also when mixed with spirits.

Barley is the most common grain in beer and very easy to germinate. Its germination process creates all of the enzymatic content necessary to convert its starches into simpler sugars. When germinated and dried, barley can be added to water at certain temperatures, awakening enzymes in its husk that begin to convert the stored “energy” into malt. This process is very temperature sensitive, and typically at different boiling points, different densities of sugars are converted. Normally awakening between 128 and 155 degrees Fahrenheit, these activated enzymes break down smaller and larger “chunks” of the stored energy into water soluble sugars, i.e. mashing. Why is all of this important in the cocktail world?  Because it gives us a more realistic picture of what – and why – the beer is doing what it’s doing in the drink.

Let us begin with India Pale Ales (IPAs), one of the most prevalent styles of beer to date. Typically, IPAs are defined by their hoppy-ness. But you can’t have bitter without sweet. In order to balance the very high barley malt content that is typical of IPAs, more hops, or bitters, are added. When using an IPA in a cocktail, oftentimes bartenders will use it as a lengthener, in replacement of soda water. Then why isn’t the cocktail more bitter?

This is because the hop bitterness is muted by the addition of simple syrup, lower proof liqueurs, or other sugars. In essence, the sugar in the components of the cocktail mutes the hops in the beer, allowing more of the malt to stand at the foreground. This is detrimental to the balance of the drink, because sugar can mask anything. If one wishes to achieve balance with an IPA in a cocktail, the best way to do so is to speak to the hops, and not the malt. Clear spirits – such as gin or vodka – are an obvious choice, as they have not had contact with wood, giving them the ability to maintain a more delicate profile. Spices are also very useful. Fresh or dried chilies, ginger and anise all speak to the hops in the beer, and also offset the sweetness in the malt.

Another common usage of beer in cocktails is hefeweizen, or wheat beer. Hefeweizens contain a very high wheat malt content, and so act the same as a “muted” IPA in (typical) cocktail application. The sugar detracts from many of the unbalanced elements in a cocktail, and makes the drink palatable. But in order to achieve balance with a hefeweizen, we need to look beyond the obvious and more at the density of the malt content itself. Hefeweizens give us a large amount of residual sugars after the brewing process, which can be added to a cocktail to achieve a viscosity that no other element can provide. Heavily wheated brews can bring an almost creamy texture to a drink, without the addition of an artificial thickener, or animal protein, such as egg white. A small amount of hefeweizen can enrich a cocktail, as well as bring balance to more intensely-flavored spirits. So, rather than use a hefeweizen as a lengthener, actually shaking it into the cocktail and making it part of the dilution process produces a silky texture other beers cannot provide.

So where do the myriad of other styles of beer fall into this picture? We need only to examine the malt content, indicated by the style. Types of malt, and their presence in the beer, now begin to play a part in our creation process. Malts are defined by several factors, but for purposes of simplification, we will stick to a basic color chart. In general, darker beers contain more malt sugar, whereas lighter beers contain less. As with any rule, there are exceptions, but we will get to those shortly.

The balance of malt in a cocktail is essential to its success. When one uses a more heavily-malted beer, it must match up with the spirit in question. Stout, or Scotch Ales, are great examples of this. Stouts / Scotch Ales tend to be very heavy in malt content – so much so, that the hops play a very small part in the picture. Using a vodka and stout together is truly magical. The vodka acts as a lengthener, giving the dense and richly-malted stout room to breathe on the palate. Since the sugar content in these beers is quite high, the vodka “pulls” the different elements of the malt apart, allowing the drinker to experience more of the elements in the beer, and expanding the depth and richness of the cocktail. Because vodka is flavor neutral, it does not fight the beer, but rather works with it, to help increase its impact on the senses. 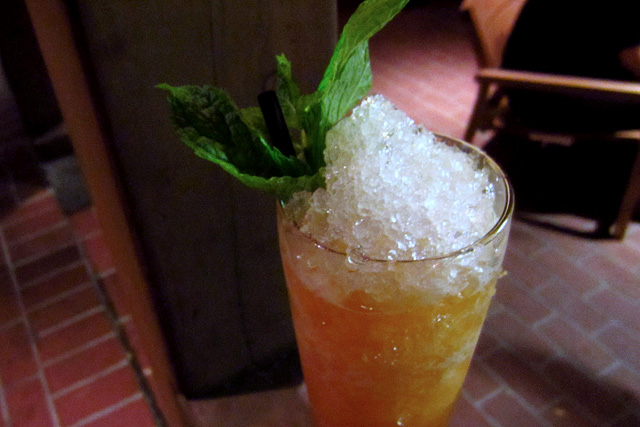 The After Hours is a Seasonal collaboration between Lacey Murillo and Brady Weise, a spiced rum swizzle made with passion fruit, pineapple and bitters, topped with Hazelnut Porter.

An example of an inverse to this rule is a cocktail created in collaboration with Lacey Murillo at 1886 Bar called the After Hours, which uses different kinds of aged rums and tropical fruit juices, with the addition of a hazelnut porter. The porter, although a darker brew, blended well with the rum profile due to its nut-like quality. With the “After Hours”, the malt is acting as a conduit for the enhancement of the spirits, a seeming violation of the above principle.

The creation of this cocktail took time, because we needed the malt to speak to the spirits in a way that wasn’t immediately recognizable – the breakthrough came when we realized that the malt was in the foreground of the drink, and needed to be subdued. Once the drink was balanced, it gave us insight into how malt can play several different roles within a cocktail, as well as the importance of understanding how the malts in the beer react with the sweetened elements already present in the drink.

Returning to our basic tenets, beers with low malt content, like Kolsch or Extra Special Bitters, are excellent for aged spirit drinks because the majority of the flavors come from other areas in the cocktail. The beer simply acts as an enhancer for the more subtle elements that exist within the spirit and citrus components, essentially expanding them. A good example of this is The American, a drink that I created using bourbon, lime cordial, fresh lime juice, and Kolsch, a very dry German lager style beer. The Kolsch, with its low malt content, dries out the bourbon and lime cordial, allowing the other components in the cocktail to stand out more prominently. The flavor profile changes from a sweet, glucose laden drink, into an almost tropical, coconut and pineapple-flavored cocktail. This is because the different elements of the wood and the citrus are able to come to the forefront – in essence, the Kolsch is acting as a flavor enhancer for the bourbon.

Another example of the inverse of our rules is the DBA Manhattan, a drink I created using barrel-aged ale with rye whiskey and sweet vermouth. Although the ale and the spirit are both aged, the spirit and beer speak to each other though the same medium, i.e. the fact that they are seasoned in wood. The malt played an integral role in this cocktail, through the same channel as with the “After Hours” – it acted as a background component, allowing the spirit elements of the drink to expand. Again, the malt took the backseat, acting as a conduit for the cocktail to take on an added dimension without the need for additional modifiers.

Noting the rules, examples and descriptions above, we see how it is easily possible to misunderstand and misinterpret malt as a component in cocktails. Beer is no more uniform of a product than any other element, and should be treated with the same respect for its production process as any other. With a bit of experimentation, new ground can surely be broken. The firm belief is that touching on the points above, a more sound understanding of malt interaction will bring about this revolution.

Malt is one of the most important cocktail components that we have available, but also one of the most misrepresented. The aforementioned all pay homage to the basic principles in the start of this piece – malt, although seeming to be simple, is much more complex than we give it credit for. The usage of it in cocktails, when properly understood, can be an amazing addition to any bartender’s repertoire.