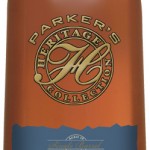 Parker Beam is truly a man who needs no introduction. Beam – a charter member of the Bourbon Hall of Fame and a grand-nephew of James Beauregard “Jim” Beam – has been practicing his family’s craft for more than fifty years. He’s the sixth generation Beam to be a master distiller, crafting the acclaimed bourbons of Heaven Hill Distilleries, which includes storied brands such as Evan Williams and Elijah Craig. For the past 30 years, Parker has been joined by his son Craig, who works alongside his father just as Parker did with his father, Earl.

Beam was recently diagnosed with amyotrophic lateral sclerosis (ALS), also referred to as “Lou Gehrig’s disease.” Heaven Hill is working with the Kentucky Chapter of the ALS Association to promote awareness and fundraising for efforts to battle the disease. To that end, Heaven Hill is releasing the “Promise of Hope” bottling of its annual fall release, the award-winning Parker’s Heritage Collection. The 2013 Parker’s Heritage Collection is the seventh in the series and the first cause-related bottling – Heaven Hill is donating $20 from the sale of every bottle to the Parker Beam Promise of Hope Fund.

As with previous editions of Parker’s Heritage Collection, the Promise of Hope is a very limited release, with a suggested retail price of $90. Heaven Hill is releasing more cases than in the past to maximize fundraising efforts – the goal is to raise $250,000 for the Promise of Hope Fund. In the press release, Beam notes, “Both my wife Linda and myself have become very involved in the ALS Association Kentucky Chapter and in raising awareness of the disease since I was diagnosed with it. We are pleased to be helping in any way we can and are most appreciative to Heaven Hill and the Shapira family for helping with such a generous financial contribution from the sale of the upcoming edition of Parker’s Heritage Collection. We hope that others will become more aware of ALS and will find additional ways to help us in our fight.”

Signed bottles and many other items will be up for silent auction and a raffle. Brokaw said, “Parker Beam is such a wonderful person and has been so grateful and moved by how our LA industry has rallied to raise money for the ‘Promise of Hope’ ALS fund.” Regarding the signed Parker’s Heritage Collection bottle, Newsome said, “This is such a special item that is for sure a once-in-a-lifetime find, especially since [Parker] signed it specifically for this event.”

Newsome continued, “Outside of the prizes and raffle, it promises to be a really fun event filled with cocktails, whiskey tasting and rock and roll! All cocktails are being poured for a suggested donation and include mobile Old Fashioned carts that will be roving around the room, Whiskey Sours, and a barrel-aged smoked Manhattan. Andie will be leading a Heaven Hill whiskey tasting, which includes this year’s recently released Parker’s Heritage, as well as our very own Seven Grand single barrel of Elijah Craig.”