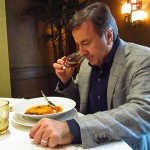 By thirstyinla On December 1, 2013 · Add Comment · In Interviews, Reviews, Tastings

The Dalmore Selected by Daniel Boulud is a groundbreaking collaboration between the James Beard Award-winning chef and the acclaimed Highland distillery. Initially available only by the glass at Boulud’s six New York restaurants – including his Michelin three-star restaurant, DANIEL – The Dalmore Selected by Daniel Boulud is now available in limited release at select retailers in the U.S. The Dalmore Global Head of Brand, Chris Watt, recently hosted a tasting of Boulud’s signature whisky and an interview with the man himself at Culina in Beverly Hills.

The project was initiated when Watt approached Boulud with the idea of creating a single malt Scotch whisky with a chef, something that had never been done before. “I loved the idea because I think being a chef is all about creating recipes with complexity, subtlety, and taste,” said Boulud. “And the way whiskies are made, where there’s so many different assemblages of casks, and so many characteristics are based on the wood it’s aged in – I felt, this is interesting. This is like cooking, but this is not like cooking. This is a recipe, but a recipe I never wrote before,” he laughed.

The creative process began when Watt brought Boulud 26 samples of whiskies of different ages. At 11pm after service, Boulud sat down with six of his sommeliers, along with Watt, Rick Burns, and Heat author Bill Buford, who collaborated with Boulud on the marvelous “Iconic Sessions” section in the chef’s new cookbook, Daniel: My French Cuisine.

“It was not a blind tasting, we knew what we were tasting,” said Boulud. “But we all had to score what we liked. I didn’t want something too smoky, and having a Scottish man with us at the table brought the argument against the sommeliers. It was great, you know all the sommeliers have a great palate, a great nose, and a great understanding of fine spirits.”

The list was whittled down to ten samples, some dating to 1976. Each whisky had matured in oak casks that were previously filled with wines and spirits that ranged from Bordeaux wine barriques to 30-year-old Matusalem Oloroso Sherry casks. The Dalmore Master Distiller, Richard Paterson, came to New York with his blending equipment, “and then we started to argue,” Boulud laughed. “And we started to agree. I asked him to do a whisky that wasn’t too conventional to him, and neither to Dalmore. But they felt there was something interesting about the creation of this whisky.”

After three visits over a six-month period, Boulud and Paterson narrowed the samples down to three whiskies, ranging from 14 to 23 years, aged in Madeira, Muscatel and port wine casks. Boulud said, “I felt it was the three most delicate – each one very different but sort of compatible in a certain sense, and there wasn’t too much opposition between them. Some were older, some were a little bit younger. I left it to Richard to decide on what will be the right proportions, the right alcohol [content].”

Paterson decided to age the final assemblage further, resting it in a sherry cask. Watt said, “We wanted to allow the whisky to harmonize and mingle together and settle down. The fourth cask didn’t give it a tremendous amount of influence from the wood, because it was only in there for six to eight months. But it allowed the whiskies to marry together and really get the flavors to the point where Daniel wanted it to be.”

Boulud was presented a final sample in spring 2013. “I really loved it and I started to serve it at DANIEL, and then later on at all my restaurants in New York, with the plan to have some for retail as well.” Customer reaction was “wonderful,” said Boulud. “I made many whisky amateurs taste it, and they really had only good things [to say about it].” Boulud’s guests weren’t the only ones who praised his whisky – the prestigious International Wine & Spirit Competition awarded The Dalmore Selected by Daniel Boulud a Gold Medal, and Wine Enthusiast named it one of the Top 50 Spirits of 2013.

In The Dalmore’s press materials, Paterson said, “It’s very easy for anyone to simply put their name on a label, but Chef Boulud went above and beyond that, giving input that truly affected the outcome of this whisky. His selection of Muscatel, Madeira and port wine casks, for example, was a combination of woods that I have never used before when creating whiskies for The Dalmore. This creation is something totally new and different in the Scotch whisky category, an assemblage based not on my own traditional experience, but rather on the well-seasoned palate and preferences of a fine chef.” 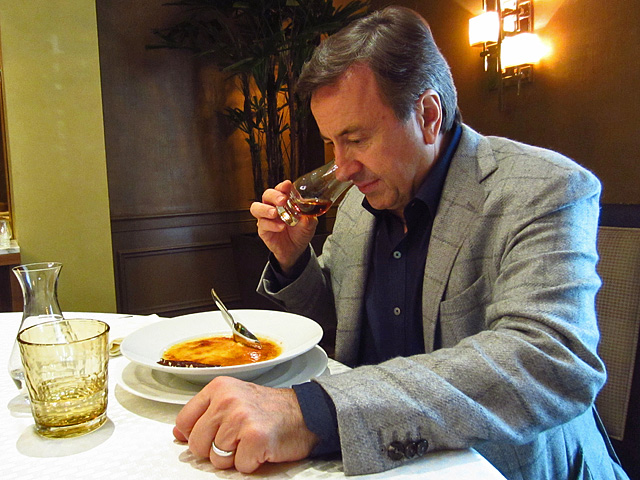 “I wanted a sipping whisky, and this is very much what I wanted. It has nothing French, and yet it has a little bit of DNA, of me, the French guy,” Boulud said with a smile. “Because they wanted to adjust the alcohol to 44%, it doesn’t hit you on the nose so hard, it’s well-balanced and you don’t have to water it down right away. You can definitely enjoy it to sip, and eventually if you want to put a little bit of water to open it up, or a small ice cube and let it open up.”

We nosed the drams of whisky and Boulud said, “It’s not the conventional taste of whisky with characteristics of a little more smokiness, and strong tobacco. This one has a little more fruitiness, I would say. Dried fruit, prune, plum.” Watt described it as “the perfect balance between the grape and the grain.”

The bespoke whisky is indeed approachable, soft and fruit-forward on the nose with pear, apple and orange peel. On the palate, a rich and velvety mouthfeel offers notes of dark chocolate and caramel, with a lengthy, spicy finish and hints of citrus and blackberries.

As we tasted, I mentioned Paterson’s trademark instructions on how to drink whisky – raising the glass several times as if you’re greeting it, so you take your time. (“Hello. How are you? Lovely day today.”) Boulud said, “That’s how I learned too. I thought I knew until I met him! And then after you shoot it, there’s the ‘hmm-hmm-hmm-hmm,’ because it makes your palate move, and your tongue move, and it automatically coats your mouth beautifully. It’s like the om when you do yoga, this is the whisky yoga moment.” 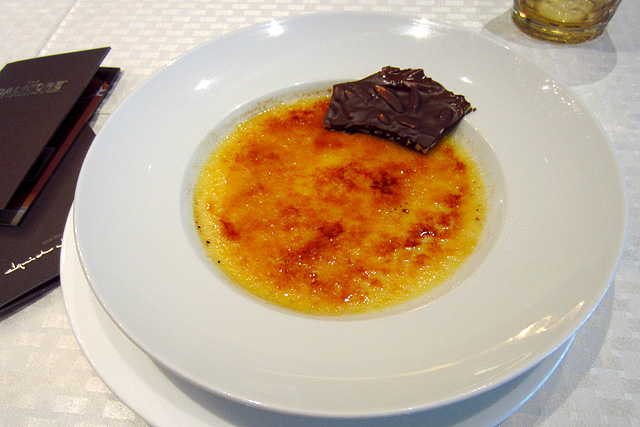 The plates of crème brûlée in front of us were another Paterson touch. Watt explained, “Crème brûlée is one of Richard’s favorite desserts, and the vanilla, the cream, the chocolate, that whole experience pairs very well with the mouthfeel of Dalmore.”

“Many other things will pair very well with it,” Boulud added. The night before, Boulud had collaborated with Wolfgang Puck to create a one-night-only, multi-course dinner at the Hotel Bel-Air. “The pastry chef made a little chocolate pudding with a toffee-caramel center, flavored with whisky,” said Boulud. “The pudding was lightly soaked in whisky, and it was a perfect match, really superb.”

Image courtesy of The Dalmore

Asked if other chefs have expressed an interested in creating their own whisky, Boulud answered, “I think I will welcome a couple of friends, and I might suggest a couple of friends to do some collaboration. Absolutely, because I think we could be a little club. As long as I approve the chefs they choose,” he laughed.

“You know, chefs, we live with our nose, our palate all the time,” he continued. “And we live for food, we always think of beverages all the time. We have such a wide range of opportunity to taste so many different things in the beverage world and fine spirits, it’s not like something so foreign for us to do.”

The Dalmore Selected by Daniel Boulud has an RRP of $200 and is limited to 1,000 bottles allocated to retailers in seven U.S. cities, including Los Angeles, New York, Miami and Chicago. It’s available in LA at Wally’s Wine & Spirits.

Noting that $200 is quite reasonable for such a limited release, Boulud said, “The purpose was not about how successful financially we will be, as much as how interesting the experience is. Because if I wanted to really make money, I would have made vodka!”