Thirsty in Seattle: Battle of the Sexes at Liberty Bar

Just before the 2013 edition of Portland Cocktail Week, eight of LA’s top bartenders stepped behind the stick for an epic Battle of the Sexes at Liberty Bar in Seattle. The cocktail clash pitted four guys against four gals in head-to-head rounds. In this corner: Christopher Day of Honeycut, Seven Grand’s Dustin Newsome and Luke Ford, and Nathan Burdette (The Bazaar). They faced off against Bacardi Portfolio Manager Jaymee Mandeville and the powerhouse trio of former Cole’s bartenders, Brent Falco, Cari Hah and Zahra Bates. Mandeville’s Seattle-based counterpart, Mark Sexauer, was instrumental in making the Battle of the Sexes a reality.

The combatants wrote tongue-in-cheek profiles of their opponents, which Sexauer posted to Facebook on the eve of the battle. Both teams dressed up for the event without knowing what their opponents would wear. Interestingly, both teams went with the opposite gender in their costumes – the gentlemen chose a Flashdance theme, while the LUPEC LAdies put up their dukes as Rocky. The reader can decide if the outfits had anything to do the eventual outcome.

Liberty founder and co-owner, Andrew Friedman, said that the idea for the Battle of the Sexes “was simply a great happenstance. I had known a few of these fine peeps through the bar world and through my wife [Amanda], who used to live in the same building that Cole’s calls home. When I found out that a number of these bartenders were coming up from LA to the Northwest for Portland Cocktail Week, I invited them to come here a few days beforehand in order to guesttend behind the bar at Liberty. Happily, what started as a couple bartenders turned into the eight that eventually came up, and that turned into the Battle of the Sexes event which really was a singularly remarkable night.”

The Capitol Hill mainstay was packed from the opening bell as each pair of bartenders went toe-to-toe for an hour. Among the spectators were 213 Nightlife proprietor Cedd Moses, La Niña del Mezcal founder Cecilia Rios Murrieta, Canon bartender Chris Elford, and Check-Fu master Rocky Yeh. Guests were given scorecards and asked to pick their favorite drink from each round – the winners would be determined by popular vote. 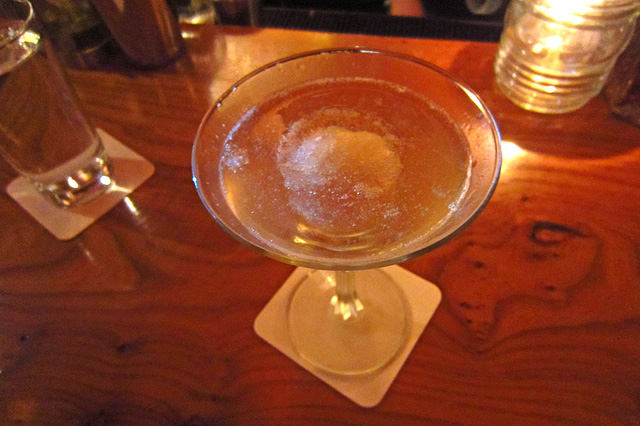 Round One: Zahra Bates vs. Christopher Day. Each pair worked with the same ingredient from the Bacardi portfolio – for Bates and Day, it was vermouth. Bates gleefully took orders for her Balls Out, a choice of three different Martini Bianco sorbets topped with Champagne: Martini Bianco, hibiscus, salt, and black pepper; Martini Bianco and Angostura Bitters; and Martini Bianco, verjus, quince, thyme, and honey. Fifteen minutes into the event, and everyone was talking about “Zahra’s tasty balls.” 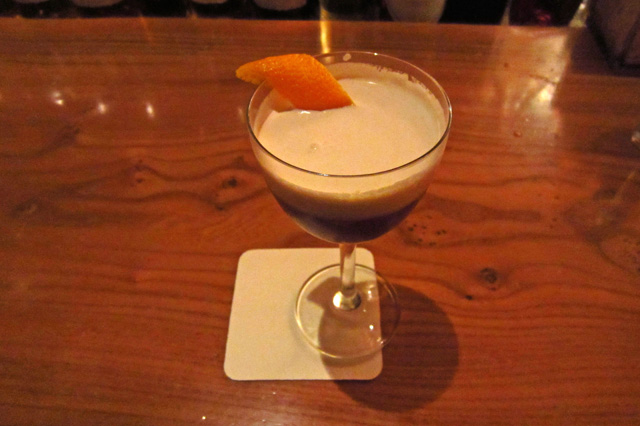 Dance Anthem of the 80s by Christopher Day

Day offered the Dance Anthem of the 80s, made with Noilly Prat Rouge, Fernet-Branca, Smith & Cross Rum and Stumptown Coffee cream. The opening round was a delicious study in contrasts – Bates’ balls floated like butterflies, while Day’s spirit-forward libation stung like a bee. 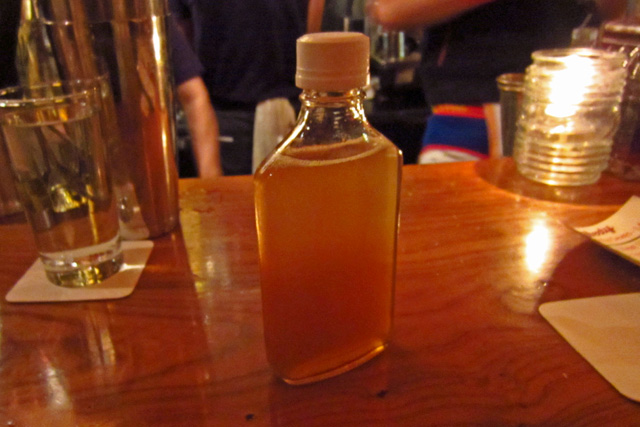 The Knockout Punch by Brent Falco 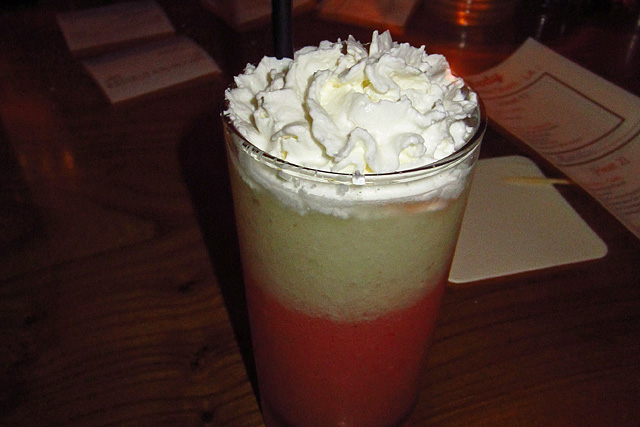 Love Conquers All by Cari Hah

What a Feeling by Dustin Newsome

Round Three: Cari Hah vs. Dustin Newsome. The agave-loving Hah served the Love Conquers All: Cazadores Tequila Blanco, strawberry lemon balm syrup, lemon juice, egg white and soda water. At one point, Bates and Falco stepped in to help Hah shake her cocktails, which elicited a roar of approval from the crowd as the Three Graces vigorously shook their tins. Newsome had infectious energy to spare as he mixed the What a Feeling, made with Cazadores Blanco, mango, black pepper and mint.

Andrew Friedman announces the final round. 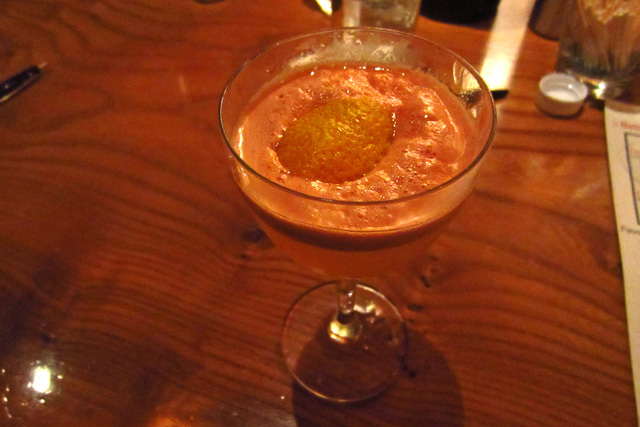 She’s a Maniac, Maniac on the Floor by Nathan Burdette

The votes were tallied and the decision was unanimous: the LAdies had won every round. But really, it was a win-win for everyone – guests enjoyed a wide range of cocktails from some of LA’s finest, and the LA team was able to let loose and showcase its creativity to an appreciative audience, many of whom were meeting the visiting bartenders for the first time.

Friedman admired the genuine camaraderie he saw among the Los Angeles crew. “What was so amazing about the event and the LA bartenders was how tight they all are. Because Brent, Zahra, Cari and Chris worked together, much less all of those that guesttended that are in the 213 [Nightlife] family, they work hand in glove in a way that only really on-point, in-the-moment bartenders can.”

“Guesttender events such as this one are probably the most valuable kind of industry get-together that I have seen,” Friedman continued. “The value of meeting each other, of working behind each other’s bars, of trading styles and information – it’s just so valuable for a bartender to see what another does when they are working. I personally learned a lot from how professional yet friendly Brent was, from how much fun Dustin created for those on the other side of the bar, by the energy projected by Cari and especially was so impressed by the creativity of Zahra. That’s not even to mention the gents!”

“LA has had a bad reputation for years as not a great cocktail city, but over the last few years, obviously that’s changed,” he said. “These are world-class bartenders and I am incredibly thankful to have been able to host them that night.”

For more photos from the Battle of the Sexes, visit the Thirsty in LA Facebook album.