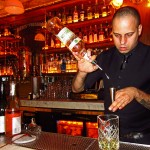 François Vera chips away at the ice laid out behind the bar, part of his prep work for another busy Saturday night at Pour Vous. Before the doors open, he welcomes a visitor to the Parisian-themed lounge, which looks like a completely different venue with the lights on. An hour later, the dimmed lights and jazz-inflected soundtrack have transformed the space to its familiar sexy persona, and the first guests start to trickle in.

Vera has been a stalwart of the Los Angeles bartender community for more than ten years, helping to open some of the best bars in LA and quietly making an impact on the city’s thriving cocktail culture. The soft-spoken native of Brazil was raised in Curitiba, the capital of the Brazilian state of Paraná and the largest city in Brazil’s South Region. Vera graduated with a degree in business administration. “Never done anything,” he laughed. “I wasn’t happy when I finished college. I was passionate about skateboarding and always wanted to live in the U.S. ‘I want nothing to do with this, I want to go and skateboard in the United States.’”

In 2000, Vera pursued his dreams and moved to San Diego for two and a half years. “I got hooked up with small sponsors, but I still had to work to make a living – there was a lot of pressure.” Vera eventually had to drop skateboarding. During a brief stay in San Francisco, Vera started bartending to make some money. Vera then moved to Los Angeles and studied graphic design at Santa Monica College. “I never thought [bartending] could be a career, I never saw it that way. Just working a bunch of clubs and dive bars. Worked some awful bars, [like] this bar in Koreatown, where the lady would buy all the bottles of top shelf stuff and refill with cheap stuff.”

Vera was introduced to the craft cocktail scene by his neighbor in Los Feliz. “A very nice guy across the street from me. Made friendship with this guy, and he said, ‘I just started working at this place Downtown, you should come see.’ His name was Matt Wallace,” said Vera with a hearty laugh. Wallace, currently the head bartender at The Famous in Glendale, told Vera, “I just got a barback job at this place, it’s awesome.” Vera took Wallace up on his invitation to stop by the bar, which of course was Seven Grand. “So I went in, and I was just absolutely in love. This is old school, it’s proper, they dress really nice. I kept bugging him to get me a job, eventually [213 Nightlife] opened Cole’s and he hooked me up. I was immediately hired and had the luck to be trained by Sasha Petraske and Eric Alperin. Listening to what they had to say, seeing the way they worked, it blew my mind.”

Vera’s bar manager at Cole’s was Raul Yrastorza, who now runs Las Perlas across the street. “Raul was a very awesome bar manager, I learned a lot from him too.” About a month after he started working at Cole’s, Vera dropped his graphic design studies and never looked back. “I knew what I wanted to do. This makes me happy.”

After Yrastorza left, Vera became bar manager at Cole’s “for a minute.” Then Steve Livigni, who was working at The Doheny at the time, told Vera he was leaving 213. Livigni – along with partner Pablo Moix – joined Houston Hospitality and opened La Descarga. Livigni initially asked Vera if he wanted to work at a Houston brothers project in Hollywood called the Hotel Juniper, which finally opened last summer as No Vacancy. Early on, it became apparent that the buildout would take much longer than anticipated, so Harvard & Stone became the next Houston bar to open after Descarga.

Livigni walked Vera through the Harvard & Stone space during construction. Vera looked around and thought, “I kinda don’t want to work here. It looks pretty awful,” laughing at the memory. Vera accepted the offer, although he declined Livigni’s invitation to be the bar manager. “I told him I needed a break from managing. I needed to bartend for a while, focus on that.”

At Harvard & Stone, Vera started honing his high volume skills. “Working with Steve and Pablo, I learned so much. They taught us you can make an Old Fashioned in 30 seconds. And it can be a great Old Fashioned, just like the one you get at The Varnish or Cole’s. I learned a lot about speed, how to make six cocktails at the same time. I learned so much working with those guys. And Harvard & Stone taught me a lot. To this day I think it was probably one of my favorite jobs, favorite bar that I worked at. Now it’s [Pour Vous], of course,” he laughed.

François Vera at No Vacancy

In 2012, Vera returned to management and created a classically-driven cocktail menu for the Chateau Marmont. After an eight-month stint at the legendary hotel, Vera came back to Houston Hospitality and helped launch No Vacancy. Vera worked with Dave Fernie, Devon Espinosa and Sean Hamilton on the opening “Dirty Dozen” menu, which also featured drinks by local stars such as Julian Cox, Marcos Tello and Damian Windsor, as well as Jim Meehan of New York’s PDT.

In addition to No Vacancy, Vera picked up shifts at La Descarga and Pour Vous. “I love La Descarga,” he said. “It was really awesome to be there when Joe [Swifka] was there, really cool guy to work with. Really chill, everything is organized behind the bar.” 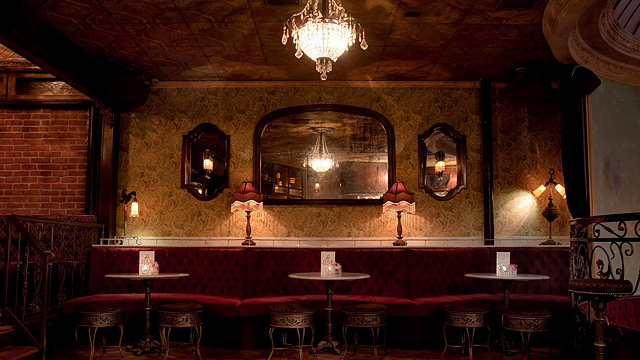 Last fall, Pour Vous general manager, Scott Logan mentioned that Fernie was joining the opening team at Honeycut. Vera threw his hat in the ring, and a week later he became the Pour Vous bar manager. “I like Pour Vous because it’s smaller,” said Vera. “I feel like I could do things my way.”

Vera’s 14-drink list features a mix of classics and originals, including two cocktails from the opening menu that continue to do well: the Moulin Rouge (Absolut Elyx Vodka, Aperol, Peychaud’s Bitters, lemon and lime juice, strawberry puree, orgeat, rosé) and Depeche Mode (Citadelle Gin, lemon and lime juice, ginger, Créme de Pêche). “I didn’t want to completely change the menu. It’s a matter of respect when you take over a cocktail program, you keep some of the old drinks.”

He continued, “I came from a classic background, it’s always been my passion. It’s not that I don’t appreciate the super-creative side, I think it’s super interesting. But I’m more on the side of the classic cocktail feel, and it’s very appropriate and I felt like it would fit really well [at Pour Vous].”

The opening menu had already been pared down by nearly half when Vera assumed the reins. “We’re a little bit of a high volume [bar], especially on the weekends. Sometimes people will look at the menu, and they just want to get a drink, there’s so much to read. Even the last menu, [there were] a lot of ingredients in certain cocktails – great cocktails, but a lot of ingredients. I felt like I wanted to make our lives easier and the customer’s life a little easier. Some of them are classics, some of them have a classic feel as well.”

Sazerac with Martell VS Cognac

Vera features the Sazerac with its original recipe, when it was made with cognac: Martell VS Cognac, Peychaud’s Bitters, Angostura Bitters, superfine sugar, Pernod Absinthe.

The barrel-aged Hanky Panky will be ready in a few weeks. 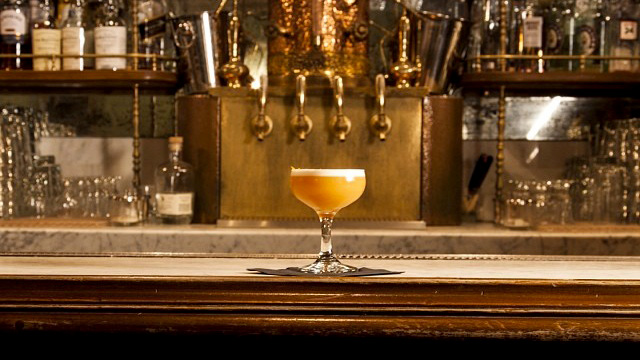 The classics on the menu can have a bit of a twist, whether it’s the barrel-aged Hanky Panky or the Brandy Sour: D’Ussé VSOP Cognac, lemon juice, superfine sugar, Angostura Bitters, citrus oil, egg whites. “Made my own way, basically – I’m sure people make brandy sours that are completely different.” 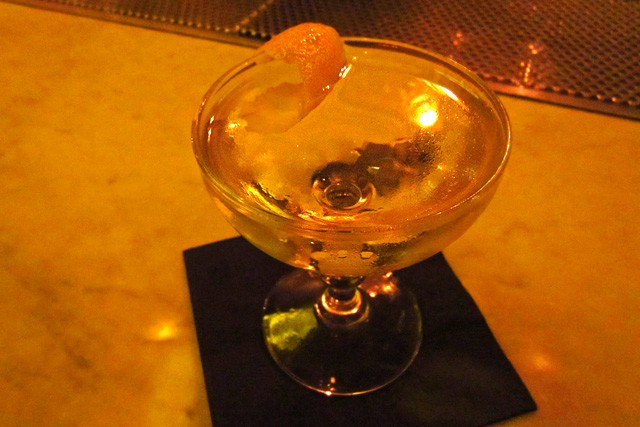 Named for the French resistance groups of World War II, La Résistance is an outstanding Vera original (recipe below). The Negroni variation is made with Fords Gin, Dolin Blanc, and Yellow Chartreuse. Vera credits Simon Ford (The 86 Company) for the name, and Dänny Ronen for the inspiration. Ronen asked for a White Negroni with Suze – when Vera couldn’t find any, he improvised and voilà! 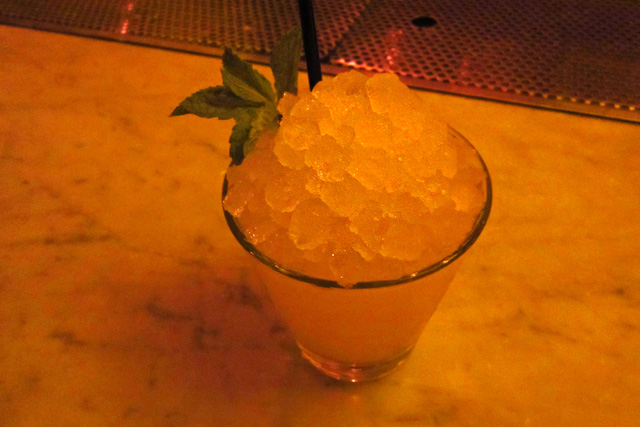 “I’m a family guy, I like my family a lot.” Vera pays tribute to his grandfathers, Stanislaw and Pablo, with several tattoos. His maternal grandfather, Stanislaw, is captured in a portrait. “This guy here on my arm, I was just a big fan of him. Something about him, when I was growing up. He was a very bright guy, even though he drank a lot,” he laughed. “The whole story of his life, I just found it very interesting.” Stanislaw emigrated to Brazil from his native Poland at a young age. When he was 18 years old, “he decided he wanted to go help in the Second World War,” marveled Vera. “And he just jumped into a boat with no money, nothing in his pocket. He just went for it. He became a pilot in the Royal Canadian Air Force.”

Vera’s mother told him the story about how Stanislaw won a lottery in Europe, boarded the Queen Mary, and threw all the cash out the window to bystanders. Stanislaw’s winnings were gone before the ship had even left the dock. “Wasted,” Vera laughed. “He never cared about money. He just wanted to be happy, he just wanted to make people happy.” 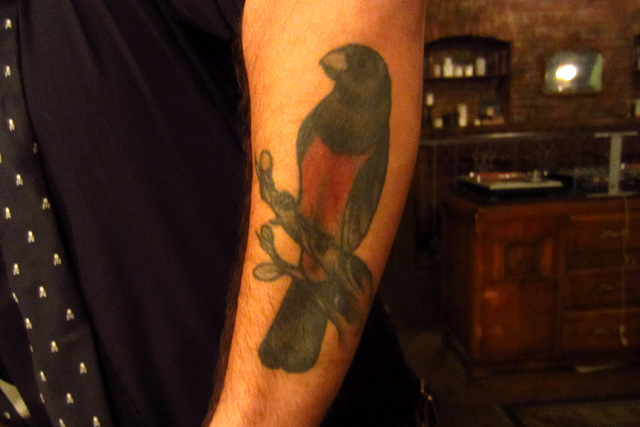 Vera got his first tattoo about eight years ago, in memory of Stanislaw right after he passed. It’s a rare bird from Brazil called the curió, which means “friend of men” in the Tupi-Guarani language. Curiós are prized for their singing, and Stanislaw gave a caged one to young François. “It sings so beautifully. When I was a kid, I just opened the cage and let it go. [This tattoo] means freedom to me.” 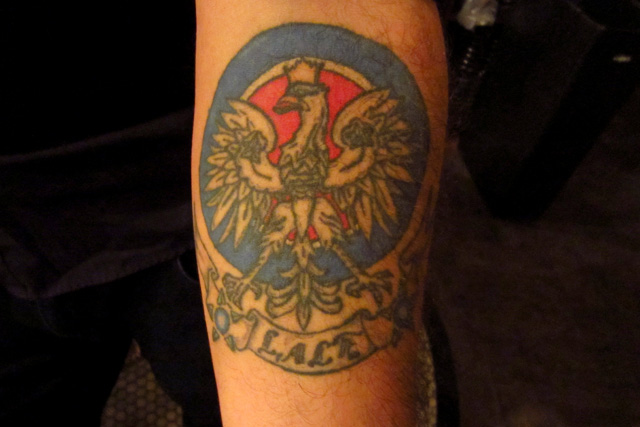 Vera visits Brazil once or twice a year, and in 2013 he added another tattoo that pays homage to Stanislaw. Resembling a family crest, the tat features an eagle from the Polish flag, an insignia from the RCAF, and stars that symbolize Brazil. “LALE” is Stanislaw’s nickname – his mom called him lalka (doll in Polish) when he was young.

His paternal grandfather Pablo, who owned a bar in São Paulo, received a nod from Vera with the Pab’s Buck, which was featured on the cover of Food & Wine Cocktails 2013. Pablo’s bar was connected to his house – the space is now a garage. “[The bar] was not a business my grandma was proud of,” Vera wryly noted. “All these drunk men, hanging out right next door to her house. And my grandfather was the leader. So, a lot of booze from both sides of the family.”

Along with billions of fans around the world, Vera is “very excited” about the 2014 World Cup, taking place in Brazil from June 12 to July 13. “It would be nice to see it with my family, be in the country.” Then he thought about the timing – the World Cup final is right before Tales of the Cocktail in New Orleans. “Tales, World Cup, Tales, World Cup. OK, I’ll pick Tales!” 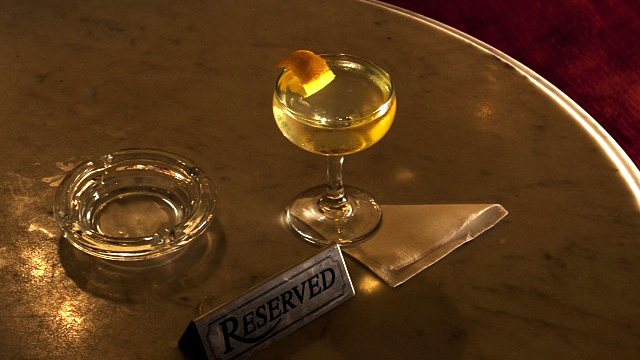