A Heavyweight Spring Cocktail Menu at The Roger Room

As the Los Angeles cocktail scene continues to grow by leaps and bounds, a trio of bars that were in the vanguard of the city’s ongoing renaissance are celebrating their five-year anniversaries. The Roger Room opened on La Cienega in June 2009, just a few months after Copa D’Oro and The Varnish, which opened in January and February, respectively. Jared Meisler, who partnered with Sean MacPherson to open The Roger Room (as well as The Pikey and Bar Lubitsch), recently hosted a tasting of the latest offerings at the dimly-lit neo-speakeasy.

The new Spring menu is a collaborative effort, featuring five seasonal drinks, each one created by a different bartender. “It’s actually hard to choose just five,” says Meisler. “We have 21 drinks on our regular menu, and the stuff to make another couple hundred drinks, and we’re bringing in new ingredients, so there’s only so much room.” The Roger Room General Manager, Matt Wise, adds, “We workshop stuff ad nauseum, we tweak it and tweak it until it’s perfect.”

Meisler suggested walking through the menu from light to heavy. “But the truth is, with the exception of one drink, everything is kind of on the heavy side,” says Meisler with a laugh. “I wonder what you think about this. I feel like, as a cocktail enthusiast myself, I kind of want more. My palate is just getting gnarlier, I want more depth, and more heavy, and more substance.” Meisler’s tastes echo those of many a veteran imbiber, which lean toward the spirit-forward regardless of the season. 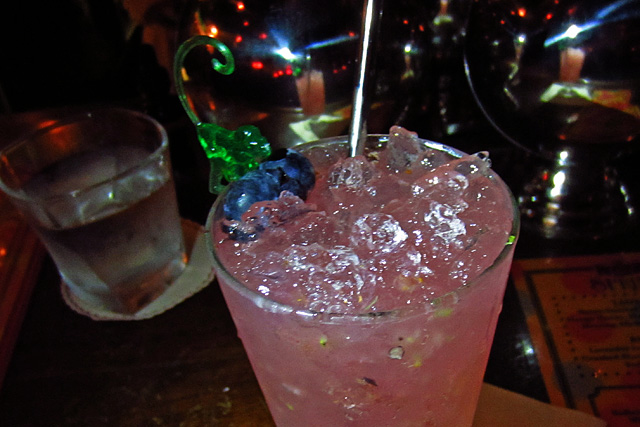 The tasting began with the Ricky Jay, created by Tai Bennett: lavender-infused Tanqueray Gin, crushed blueberries, lime juice, club soda and crushed ice. “It’s like Spring in your mouth, in bloom,” says Meisler. “What’s nice about it, often that kind of drink would be a little bit too sweet and you just lose the gin. But the gin is really present, it’s not just a foofoo drink, it’s still a punchy drink.”

Indeed, the Ricky Jay honors its namesake, the famed sleight-of-hand master – it’s a bright, floral drink with wide appeal, but there’s a subtle kick to interest cocktail aficionados. Wise notes, “The response has been incredible. People are really into this cocktail.”

Meisler continues, “It really represents the season well. If you drop that in December, nobody would give a shit. Whereas our hot cider was far and away our most popular in December. Plus we named it Christmas Card from a Hooker in Minneapolis, which is a Tom Waits song, so that just sold.” 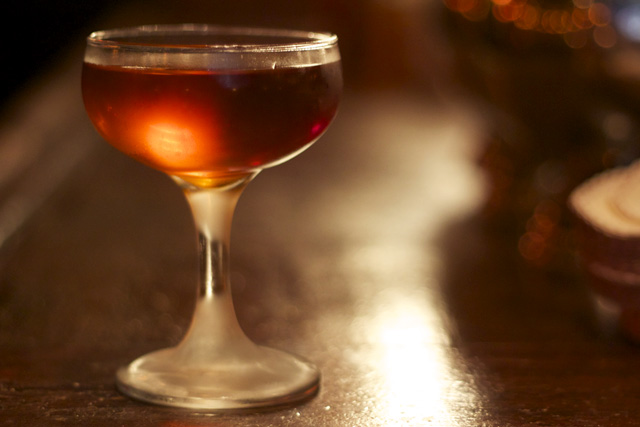 Next was the Kublai Khan No. 2, created by Jason Porter: Old Tom Gin, calvados, Crème de Menthe, and Angostura Bitters. In a 2012 interview on NPR, author Richard Bennett (The Book of Gin) discusses the original Kublai Khan No. 2: “Whether this was actually made is not something I think we’re sure of. We find this in the writings of the great occultist, Aleister Crowley. Crowley tells us in his writings that he would go to a certain pub in Bloomsbury in London and order what he called a Kublai Khan No. 2, which he tell us was a mixture of gin and laudanum. Now, laudanum is essentially the earliest version of a sort of general painkiller. And it’s opium, so not far off heroin, dissolved in sherry. So if you imagine a kind of heroin Martini, this is what Crowley tells us he was drinking.”

Meisler says with a laugh that Porter, “being a [Crowley] fan and possible Satanist – we’re not sure – brought it back to life. He omitted the laudanum, chose the Old Tom Gin and the calvados. I don’t think the original recipe called out specs, it just said what was in it. I think [Jason] balanced it out really well. This is not for the masses, this is for the heavy. You think, what’s in here, and the last thing you think is Crème de Menthe. He uses it sparingly but it’s definitely there, and I think that’s what keeps going. And oddly it’s sort of like the vehicle that carries the flavors on the back.” 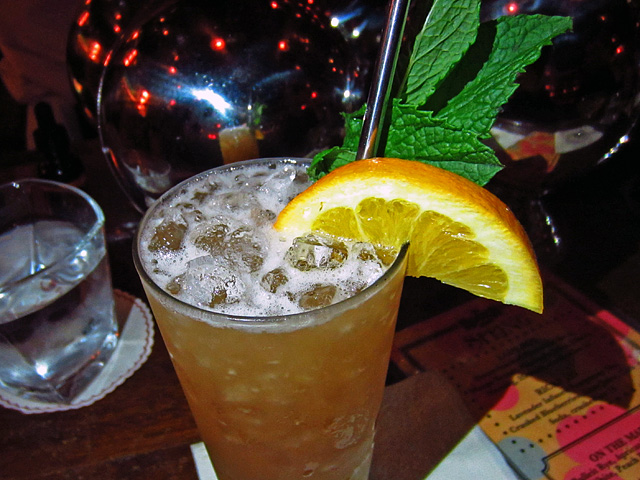 The Lady Boy, created by John Lawniczak, is made with house-smoked Plantation Rum, mango nectar, pineapple juice, Cherry Heering, hickory, and crushed ice. “The way it started, it was just a really nice Tiki-style drink,” says Meisler. “It’s interesting, it’s well-balanced. We tried it with probably 10 different rums before we landed on the right one. I was really proud to feature it, because it’s a really well-balanced Tiki cocktail, and those are hard to come by, I think.”

“But then we thought, let’s take it further,” Meisler continues. “And if anything, I think those drinks err on the side of sweet. So you can add citrus and balance it, or add bitters and balance it. What’s another step that would be far out, and create a whole experience. And we thought, ‘smoke.’ And we’re thinking, smoke and tropical is like a luau.” A PolyScience Smoking Gun gives the Lady Boy the desired effect. “But we didn’t want to hit you over the head with it,” says Meisler. “We don’t smoke the entire cocktail. So we smoke the rum, we smoke the juice blend together, and then we put in fresh lime.”

On the Make | Photo by Eric Shani

Created by Bruce Hood, the On the Make is made with Bulleit Rye, Apricot Liqueur, egg white, and peach bitters. It’s a relatively straightforward sour – the stone fruits give a nod to Spring, and the rye offers the signature “heavy” of this season’s list. 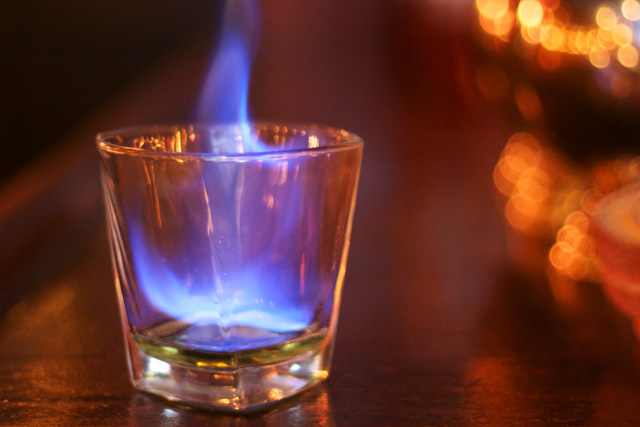 Flamed Chartreuse for The Big Shot | Photo by Eric Shani 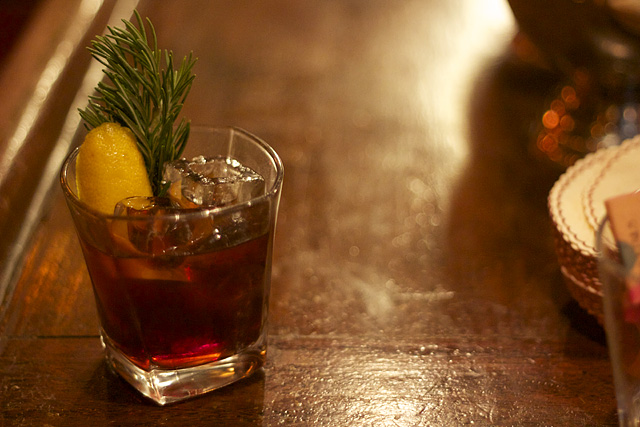 The final cocktail was The Big Shot, made with Pierre Ferrand Cognac, Amaro Averna, rosemary, and flamed Chartreuse. The Big Shot was created by Lane Compton, “a proud protégé of Damian [Windsor] and Jason [Bran],” says Meisler. At the inaugural Golden State of Cocktails earlier this year, Compton took part in an impromptu cocktail competition that sprang from a cognac cocktail session. “Lane took the ingredients given at the cognac [seminar] and quickly created the basic idea for the drink. It was very good, but needed some more time and development. We took the idea back to the Roger Room and worked to incorporate some smoke and mellow the Chartreuse.” The Big Shot would be welcome at any time of year, but judging from how many times the eye-catching blue flame of the Chartreuse appeared during the tasting, the forecast for this Spring calls for “heavy” with a 100 percent chance of delicious.