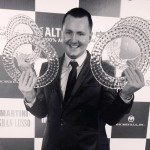 The world’s top bars, bartenders, brand ambassadors, spirits and writers were honored at the 8th Annual Spirited Awards, which took place at the 12th annual Tales of the Cocktail in New Orleans. Following the largest nomination pool in Spirited Awards history, an international panel of 140 judges recognized honorees across 23 categories. Simon Ford and Tom Caltabiano hosted a breezy ceremony that entertained the sold-out audience with an enjoyable mix of glamour, laughs and a few groans.

San Francisco’s legendary Tequila Ambassador, Julio Bermejo of Tommy’s Mexican Restaurant, was the recipient of the Helen David Lifetime Achievement Award for being “a champion for tequila here in the United States and around the world, helping to foster greater knowledge and appreciation for the often misunderstood spirit.”

The videos this year by Le JIT Productions were the best yet, and once again some familiar L.A. faces had a starring role. Case in point, this clip that introduced the award for World’s Best Drinks Selection, featuring Pablo Moix taking care of Simon Ford and Jacob Briars at Scopa Italian Roots:

The day after the awards, American Bartender of the Year winner, Sean Kenyon (Williams & Graham) posted to his Facebook page:

My favorite thing about this award is not the fact that it says “Sean Kenyon” on it, but the line that reads “Denver, Colorado.” The judging committee for ToTC has finally recognized a No Coast, secondary market with a major award. Come to Denver… We have an amazing culinary and bar community. You need to experience it first hand. See you there!

Kenyon – who never fails to impart wisdom and knowledge in his posts – touches on the real takeaway of the Spirited Awards. Whether it’s a winner or finalist, the long list of must-see bars continues to grow with every ceremony. There’s no better time than the present to start checking off that bucket list. Cheers!

Following is the complete list of 2014 Spirited Awards finalists, with winners listed in bold.