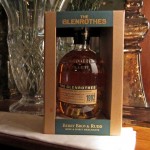 The Glenrothes 1992 Vintage, 2nd Edition Launches in the U.S.

By thirstyinla On November 2, 2014 · Add Comment · In Events, Tastings 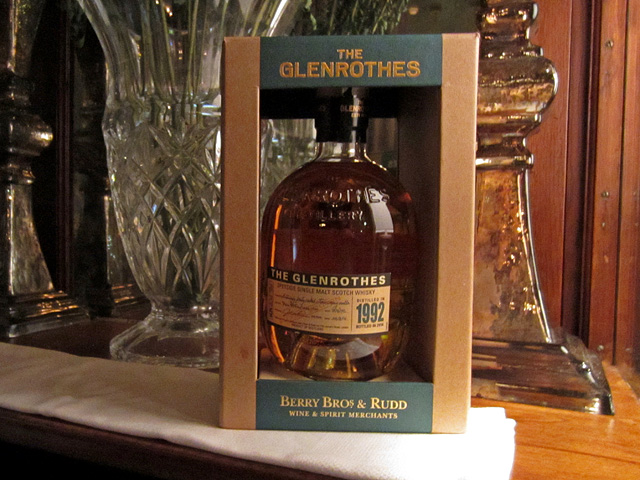 For single malt Scotch aficionados, it’s been far too long since the legendary Ronnie Cox last hosted a whisky tasting in Los Angeles. In 2012, he presented a music-themed tasting of The Glenrothes at The Parish, which culminated with the spectacular 1978 vintage. Cox, the Global Heritage Director of Berry Bros. & Rudd, was back in L.A. recently to celebrate the launch of The Glenrothes 1992 Vintage Single Malt Whisky, 2nd Edition.

The first 1992 vintage was released in 2004. At that time, Glenrothes Malt Master John Ramsay selected the casks he felt were at their peak, but left some casks to continue aging. Ten years later, under current Malt Master Gordon Motion’s watchful eye, the second edition of the 1992 vintage launched to the public in October 2014.

In the press materials, Cox says the 1992 Vintage, 2nd Edition is “definitely an uplifting, conversational style. The original 1992 was more formal and austere; here we have a confident, but altogether more ‘come-hither’ expression. This edition is the first Glenrothes vintage comprised entirely of whisky aged in refill casks, allowing the true Glenrothes character to come through.”

The tasting took place at Faith & Flower, recently named by Esquire as one of the 2014 Best New Restaurants in America. The vertical tasting featured The Glenrothes 2001, 1998 and 1995 vintages. The highlight of the event was a dram from the second bottle of the 1992 Vintage, 2nd Edition to be opened in the world. 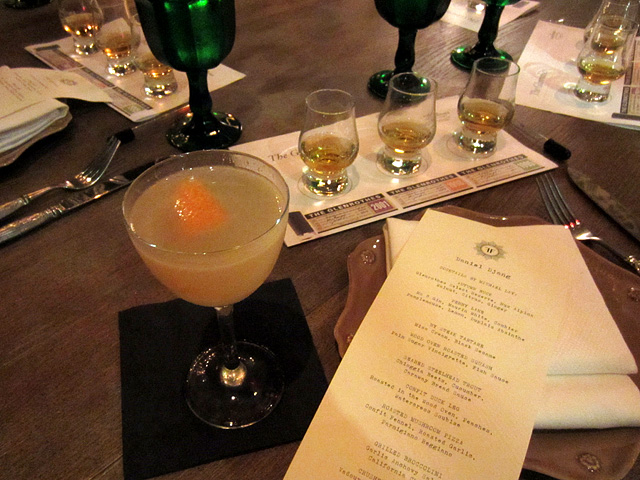 Looking dapper as always, Cox enlivened the evening with anecdotes on everything from the higher life expectancy of West Londoners compared to East Londoners, to the origin of the word “butler” – from the Old French botellier, or “officer in charge of the king’s wine bottles.” With seven generations of whisky distilling in his family, Cox certainly has no shortage of tales to tell. His own story with Berry Bros. & Rudd began in 1989, when he was brought on board to look after Cutty Sark in Latin America. (The Glenrothes is the backbone of the Cutty Sark and Famous Grouse Scotch blends.) 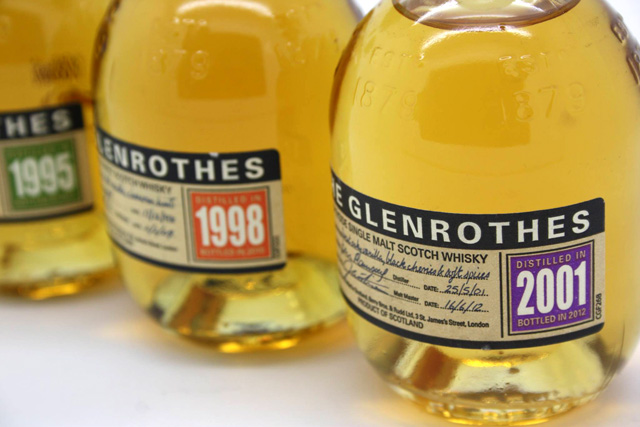 The vertical tasting began with the Vintage 2001, bottled in 2012 and described by Cox as “complex integrity in a glass.” On the nose there’s lemon zest, butterscotch and vanilla. The vanilla continues on the palate, as well as oak, nutmeg and cinnamon. The finish offers the Speyside distillery’s signature soft spices – sweet and dry, lingering vanilla and oak, with a hint of orange peel.

Next was the 1998, the Core Vintage that followed the 1991 and 1994 vintages. Bottled in 2009, the Vintage 1998 is Gordon Motion’s first bottling as Malt Master – he describes the 1998 as “Carmen Miranda’s hat in a bottle.” Indeed, the sweet and spicy nose showcases vanilla, honey and grilled pineapple. More vanilla on the palate, with Christmas spices and citrus. The finish is long, with notes of vanilla, nutmeg and a hint of marmalade.

Cox said the Vintage 1995 was the first Glenrothes expression made from casks specifically laid down with the intention of bottling the whisky as Glenrothes at maturity. Previous vintages were selected from existing casks. The Vintage 1995 is made with 30% first-fill sherry casks (American and Spanish oak) and the remainder from refill casks. The floral nose gives butterscotch, allspice and hints of chocolate and coffee. The 1995 is rich and textured on the palate, with vanilla, maple syrup and dried fruit notes. The sweet and spicy finish is warm and lingering. It’s a wonderfully rich, sweet and balanced whisky – as Cox says, it’s ideal for an after-dinner dram, when “the conversation is in full flow.”

And then it was time for a climactic dram of The Glenrothes 1992 Vintage, 2nd Edition. As mentioned above, the second edition is aged 10 years longer than its predecessor. The 1992 Vintage, 2nd Edition is non-chill filtered and aged in a mixture of refilled sherry butts and American ex-bourbon hogsheads. The new expression is bottled at 44.3% ABV, compared to 43% for the three Core Vintages that were also sampled.

The additional decade of aging has imparted a rich depth of character to the second edition. Vanilla, dark coffee and chocolate on the nose hint at the velvety mouthfeel to follow. On the palate, an elevated Glenrothes profile of rich vanilla and intense spice is accompanied by molasses, honey and orange peel. The lingering finish has a long fade, with more vanilla, citrus and milk chocolate. A few drops of water opens it up with hints of banana and other tropical fruit. The Glenrothes 1992 Vintage, 2nd Edition is a superb whisky, the epitome of the thoughtful, “conversational” single malt Scotch that Cox so eloquently described to his guests.

Priced at $249.99, The Glenrothes 1992 Vintage, 2nd Edition is now available in the U.S. via Anchor Distilling Company. For more information, visit www.glenrothes.com.