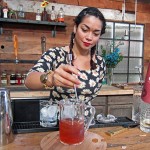 By thirstyinla On March 3, 2015 · Add Comment · In Interviews, Stories 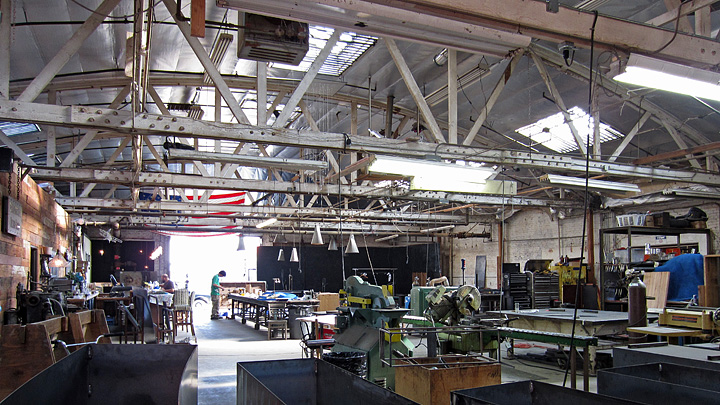 Claudia Ramirez stands between two adjacent studios on Kohler Street, near the border of the Arts District and the Industrial District in Downtown L.A. She points to both spaces and describes how they represent two sides of her persona. On her right is Super Chief Gallery, where she lives, writes and creates her art. To her left is Westin Mitchell Design Group, which houses the private bar that functions as her cocktail lab.

Westin Mitchell’s expansive 7,000 square-foot warehouse is used as a showroom, industrial work space and special event venue. A tight-knit group of artisans, each with their own specialty, work with a range of materials – wood, metal, concrete, glass and fabric. This spring, co-founder Westin Mitchell is launching a new seven-product line, which includes a bar cart, lighting, desk and vanity.

One area of the warehouse is occupied by (wh)ORE HAüS, founded in 2012 by Meyghan Hill, a model who picked up a welding torch after a rough breakup. Hill creates furniture and design products that range from a recently launched bedroom collection to bespoke pieces for residential and commercial spaces.

The creative and collaborative energy of Westin Mitchell is captured in this video of the studio’s grand opening party from March 2013. Keep an eye out for the Blowtorch Burlesque girls.

In addition to selling their individual products and pieces, the artisans collectively offer their services to hand craft bars, furniture, glassware and more for the hospitality industry and private clients. Ramirez explains, “[Westin Mitchell] is full service, literally from the ground up. From building the physical bar itself to staff training, cocktail menus, we can do everything.” 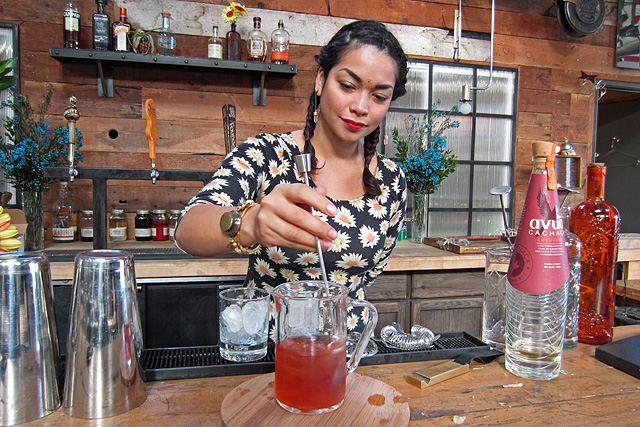 Ramirez tends bar at General Lee’s in Chinatown a few nights a week. She steps behind Westin Mitchell’s in-house bar, nicknamed “Sweet Claw.” With its backdrop of reclaimed wood, the long bar easily stands out from the studio’s industrial surroundings. Ramirez starts arranging the flowers she had just bought, something she does frequently to brighten up the cavernous studio. “I try and keep it nice and fresh in here. I like doing fresh juices during the day. Right now I’m focusing on non-alcoholic beverages. I’m trying to design menus for bars to have fresh juices that are made to order like a cocktail. Even if you batch it out, [you can] put it together like a fresh cocktail to give a customer who doesn’t drink (or isn’t drinking for the night) an interesting option instead of soda, straight juice or a Shirley Temple.” 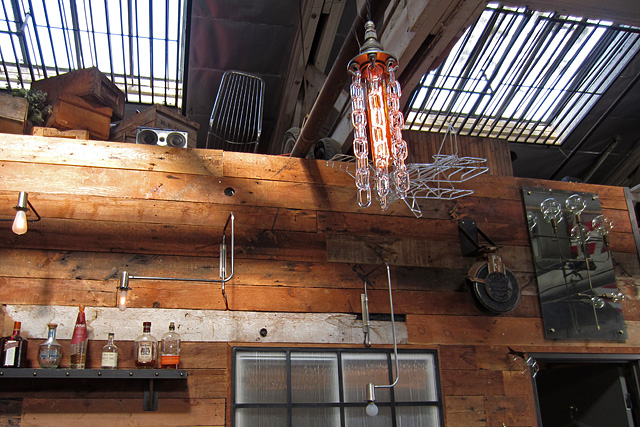 Ramirez points out various light fixtures, vases and glasses. “Everything that’s on this bar is for sale. It’s more of a retail space within the shop. We don’t sell any alcohol, but we do sell elements of our design work. My part of it is turning it into more of a craft bar. It was a little fratty when I first got here,” she laughs. “Bud Lights, kegs of crappy beer, red Solo cups and stuff.”

Brands will meet with Ramirez at the studio, ask her to do some R&D, then come back after she’s created cocktail recipes and do a tasting. At the time of this visit she was working with Avuá Cachaça. “[Avua] is an amazing brand. I actually didn’t like cachaça. At all. And Pete (Peter Nevenglosky, co-founder of Avuá Cachaça) was like, ‘Let me do a tasting at your spot and I’ll change your mind.’ He came by and did a tasting here and taught us all about the product. And we fell in love with it. So I’ve been working on cachaça cocktails. Next time he comes by, I’ll have six of them for him to try.”

As she talks, Ramirez makes an Old Fashioned with Avuá Amburana, an exemplary cachaça aged in indigenous amburana wood. “It’s nice to have a lab, an actual physical workshop-within-a-workshop where I can come up with this stuff. Among the other things I’m doing is making my own bitters. Over there I’m testing out different flavors to infuse with the cachaça.”

“It’s a little different from your typical [bar] setup. It’s multi-functional. It’s great that I found this place and found all these awesome minds.”

The Sweet Claw backdrop is made from reclaimed wood.

Ramirez’s involvement with the Westin Mitchell crew could not have been more serendipitous. “I came out to L.A. because Super Chief had sold some of my work in New York while they were building the space out here. When a studio opened up they asked me if I wanted to move to L.A.” More than a temporary artist-in-residence, Super Chief wanted Ramirez to be a permanent part of the collective. She moved to L.A. in September 2014.

“The cool thing about Downtown is that there’s so many resources here,” says Ramirez. “There’s ice. There’s materials that are cheap. Flowers, fabrics, all that sort of stuff.” It wasn’t long before she stopped by Westin Mitchell to see what her neighbors were up to. And it turned out her skillset and experience as a bartender were a perfect fit. “I’ve been bartending for a long time and I’ve been working in a lot of luxury bars, with hotel groups and really craft cocktail bars. So I know what I’m doing with designing menus and stocking bars and curating what should be here.”

A native of New York, Ramirez grew up in Queens. Her family currently lives on Long Island, where she went to high school. She studied Political Science at George Washington before she left to work at VICE Magazine doing special events. Her first job was at a bar. “It was an Italian restaurant – and this is a super New York thing – it was a pizza slice joint in the front with a semi-fancy restaurant with a bar in the back. So my first job was in the hospitality industry and I kind of never stopped doing it. I did basically every job except in the kitchen, I was never really interested in becoming a chef.”

“I was always impressed with the skills that went into bartending. I was living in the Lower East Side, and there was this bar there called Milk & Honey. I think you might be familiar with it,” she says with a smile. “I used to work around the block [from Milk & Honey] at this nightclub called Hotel Chantelle. I started out as a coat check girl and then they put me on dinner hostessing. And then I started doing the door at different high-end events and started freelancing event production. Private events especially, VIP events for different clubs. All over New York, even in the Hamptons. I’m really into sailing, so I sailed all over New York harbor and ended up living on a sailboat out in Montauk and working out there in food and beverage for two years. I was exploring a lot of different things in the industry that I wanted to do.”

She continues, “Hotel Chantelle was a high volume venue, it was a club-club. And the antithesis of that was Milk & Honey. I had heard about this place, and at that time you had to have a text message, a number, you had to know somebody. They would come out and see if they knew you and turn you away if they didn’t. Death & Co. was around too, and PDT was there. Those were the three big places and we drank at all of them. And they had their different styles. Milk & Honey was smaller than Death & Co. and that made it a little more exclusive. If you had six people in there drinking for an hour, you couldn’t get in for a while.”

Since she was working around the block, Ramirez became a regular at Milk & Honey. “When I’d get done with doing the door around 1 or 2, I’d go over there and have a couple of shots with the guys. I was young, I had just turned 21. That’s when I met Sammy Ross, Michael McIlroy and all the guys that worked there. They really influenced me.”

The quiet, refined Milk & Honey experience was the polar opposite of the rowdy LES crowd that Ramirez knew. “This is what I’ve been looking for! A well-behaved audience for what you do. And people were reverent. They were going [to Milk & Honey] because they were cocktail nerds, they’d heard about these guys and had come from all over the world to see what they were working on and have a Penicillin from Sam Ross.”

“That was my Cheers. That’s how I got into cocktails. Being around them, and they were open to teaching me a little bit of what they were doing. Just by sitting at their bar, I never worked for them.” She started looking for places where she could learn more and never looked back. Just before Ramirez moved to L.A. she was working at Wise Men in the East Village. She was working with GrandLife Hotels (the group that runs Soho Grand and Tribeca Grand) and Paul Sevigny, who had opened a bar at the Tribeca Grand called Paul’s Baby Grand, now known as Paul’s Cocktail Lounge.

“I was always an artist throughout all of this,” says Ramirez. “Nightlife was the way I could fund my day life in the studio and not have to show up in an office from 9 to 5. You’ll find that the bartending artists in New York, there’s a ton of them and this is exactly why. They can work at night, wake up and be in their studio if they live in it – like I do – just wake up and be there and have this freedom for your day. So if you don’t have to show up to work until 7 or 8 you’ve got at least this much time during the day to dedicate to your craft, whatever craft you’re into.”

“The one thing that I’m most excited about is the glassware that I’m embarking on making.” Ramirez introduces Uri Davillier, the master glass blower who founded Neptune Glassworks in 2000. Trained in glass, ceramics and sculpture, Davillier produces functional designs as well as sculptural pieces. “Uri’s been doing this for a long time, he’s so far ahead of me. But he’s great to have around because he’s teaching me so much. I’m a big fan.”

Ramirez notes, “Uri and I work so well together because I’m a professional bartender, and when we come up with tools and stuff I can say, ‘This is never going to work in a bar. No bartender is going to want to use this, it hurts your elbow when you shake it.’” 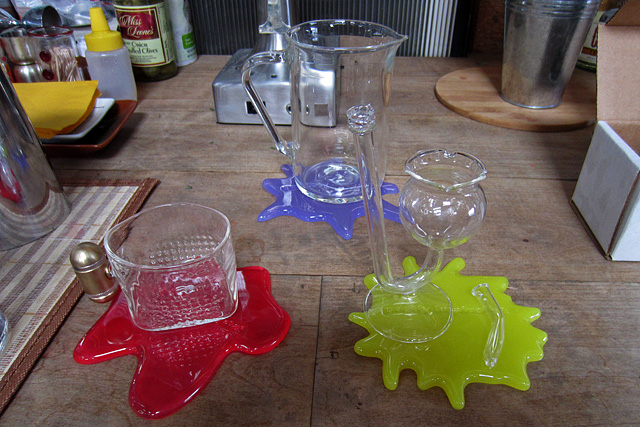 “He’s the genius behind glassware like this,” she says and places a mixing glass and other pieces on the bar. “We do these carafes for companies like Blue Bottle, private enterprises and restaurants. These are the mixing glasses that I’m going to start using. They’re very simple, but I’m slowly going to start designing my own patterns and weights.”

“I’m all about taking the classic shapes and making them a little bit more artfully thought out while still being extremely durable.” Ramirez taps one of the mixing glasses. “This thing can withstand heat changes from really, really hot to really, really cold. Blue Bottle loves these, by the way.” 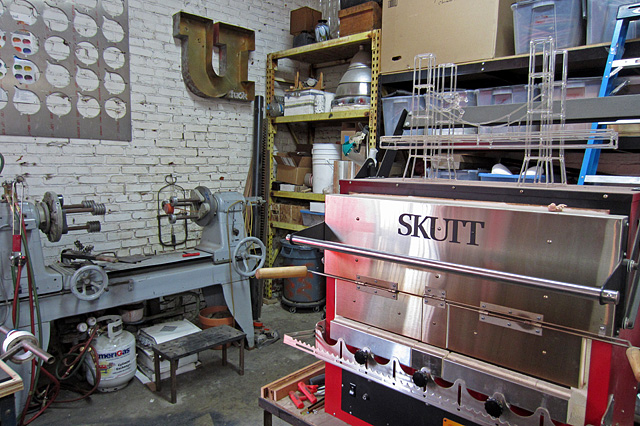 Ramirez walks over to her workstation, where her toolkit switches from jiggers and Hawthorne strainers to a GTT Delta Elite and a Nortel Red Max hand torch. “This [lathe] rotates glass, so you put the flame to it and the glass spins until you can manipulate it into pretty much any shape.” Inspiration can strike at any moment. “[There are times] we’ve been drinking at the bar and literally had an idea and stepped over here. ‘Let’s try and do it, right now!’”