The Tiki Torch is Burning Bright at The Coconut Club 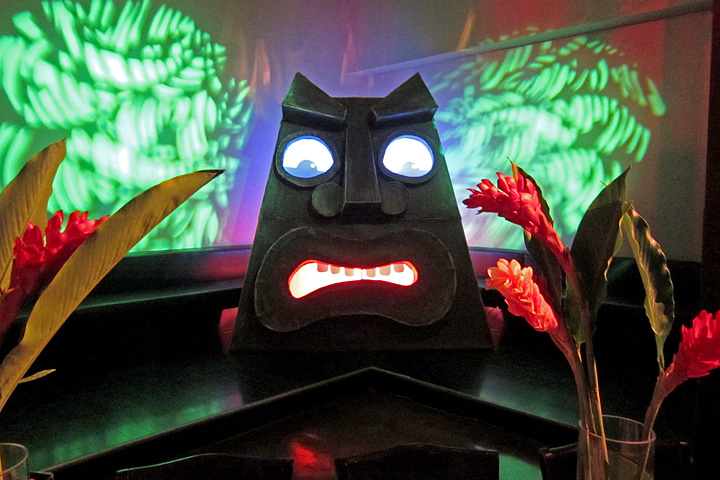 The Tiki god Volcan watches over The Coconut Club.

In an early scene from Fritz Lang’s 1953 film noir, The Blue Gardenia, Norah Larkin (played by Anne Baxter) goes on a blind date with Harry Prebble (Raymond Burr), a womanizing calendar girl artist. They meet at the Blue Gardenia Cafe on Vine, where Prebble orders a round of Polynesian Pearl Divers and describes the cocktails to Larkin:

“These aren’t really drinks. They’re trade winds across cool lagoons. They’re the Southern Cross above coral reefs. They’re a lovely maiden bathing at the foot of a waterfall.”

Prebble’s seductive words perfectly capture the essence of The Coconut Club, an immersive Tiki experience presented by chef Andy Windak, Nathan Hazard (These Drinks) and Elana Lepkowski (Stir and Strain). The Coconut Club recently completed a three-night run at a historic space on Wilshire Boulevard near MacArthur Park. I donned my best tropical-chic threads and joined my fellow travelers as Hazard’s guest on opening night.

The latest iteration of the Tiki popup took place in the landmark building that housed the Hayworth Theatre and La Fonda Supper Club, a popular restaurant that featured a mariachi dinner show before it closed in 2014. According to the Los Angeles Conservancy, the two-story building is “a prime example of the Spanish Churrigueresque style practiced in the mid-1920s by the firm of Morgan, Walls and Clements and perfected by its chief designer, Stiles O. Clements.” The architectural firm worked on other landmark L.A. theatres, such as the Mayan, the El Capitan and the Wiltern.

Before La Fonda, the restaurant space was known as Vagabond’s House, the third Polynesian supper club opened by restaurateur Joe Chastek. Like his earlier venues, Zamboanga and the Tradewinds, Vagabond’s House was a popular destination for celebrities and sports stars. 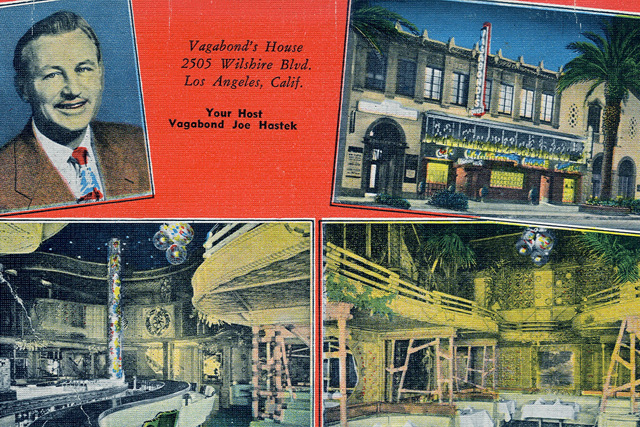 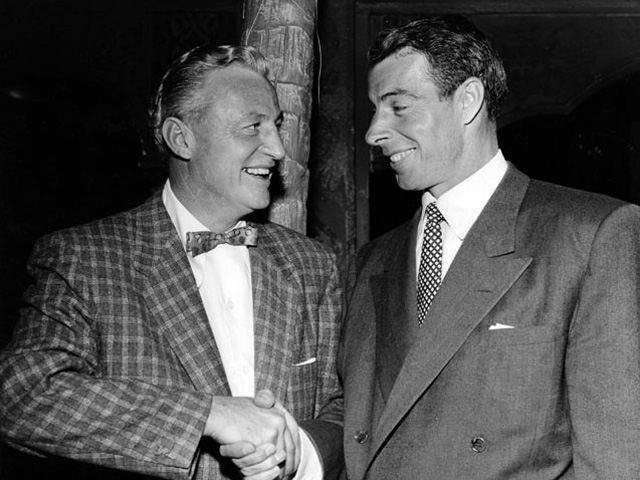 Aug. 21, 1953: A couple of Joes, Mr. Chastek and Mr. DiMaggio, are photographed at Vagabond’s House. | From the Los Angeles Public Library Photo Collection

Decades after Vagabond’s House closed, The Coconut Club resurrected the spirit of Chastek’s South Seas hotspot with a four-hour multimedia extravaganza. The journey began as soon we stepped through the doorway and into another time and place. A long bar was lined with two dozen coconut cocktails, while the back wall was decorated with a variety of exotic paraphernalia. 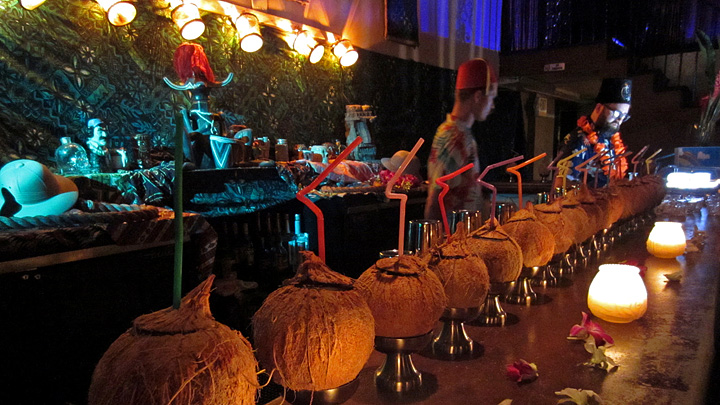 All of the coconuts at The Coconut Club 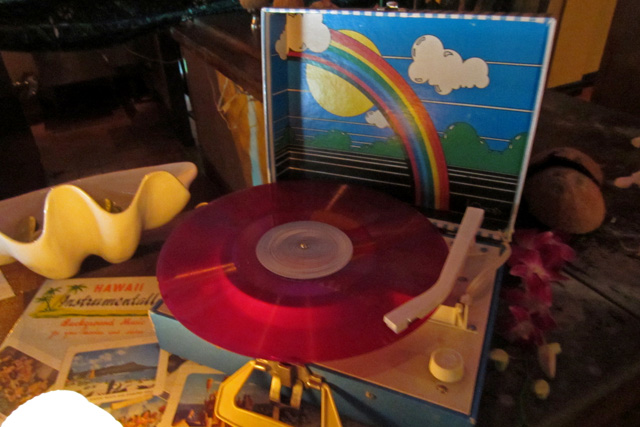 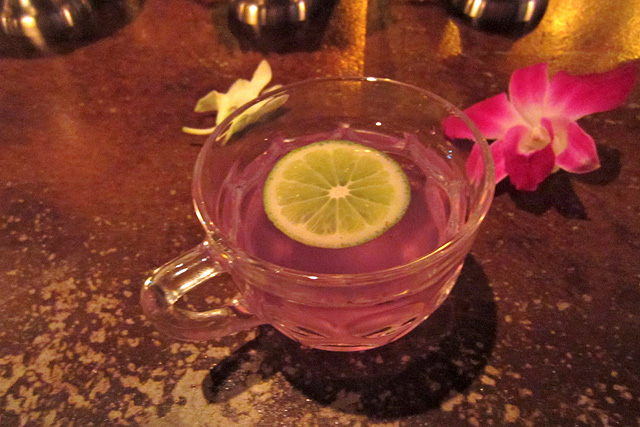 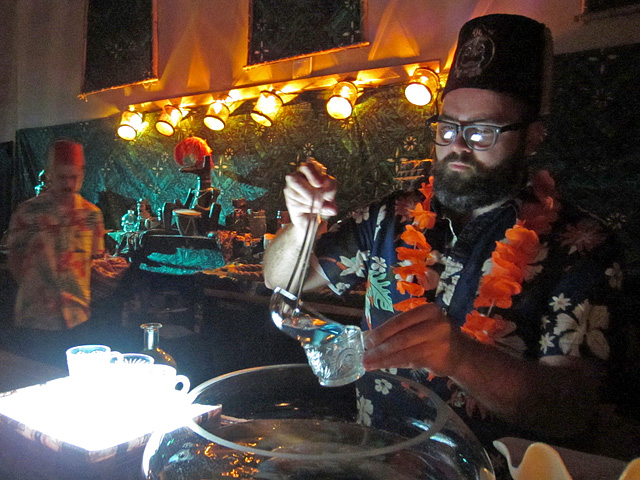 Hazard describes himself as “an unabashed Tiki nut, barfly and cocktail concierge.” Imbibers can find his cocktail recipes in collections like The Way We Ate (Simon & Schuster) and Savory Cocktails (Ulysses Press). He’s also the co-host of The Table Set podcast, and was named Chief Brunch Officer of Los Angeles by Aperol to serve as brand steward. In addition to The Coconut Club, Hazard creates custom cocktails for clients and staffs private events.

During The Coconut Club’s collaborative process, Windak creates the food menu, and Hazard and Lepkowski test cocktails both together and separately. “We do occasionally all taste together,” says Hazard. “Before each run, Elana and I discuss new [cocktail] ideas, recipe test separately, then do a tasting together to decide on the final menu. Some cocktails such as Vagabond’s Ghost are purely collaborative and came from our combined R&D play.” Hazard notes The Coconut Club’s food and drink menus change constantly – every event is a bit different and therefore unique.

The day of the event, the kitchen starts prepping at 10am and the bar by 11am. “Everything at the Coconut Club is meticulously hand-made, from the bread doughs to the cocktail syrups, fresh squeezed citrus, hand-opened coconuts and extracted coconut water.” 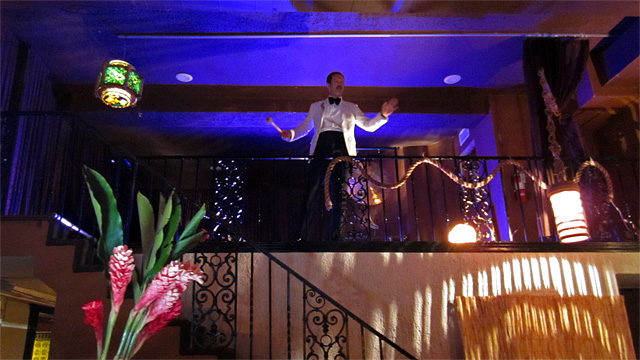 Darren Herczeg welcomes everyone to The Coconut Club

At the sound of the gong, we were welcomed to The Coconut Club with a flourish by the emcee, Darren Herczeg. Our dapper host invited us to toast with a Pineapple Skewer: fresh pineapple, dried pineapple, “pine-apple” and a Haribo Gold-Bear. 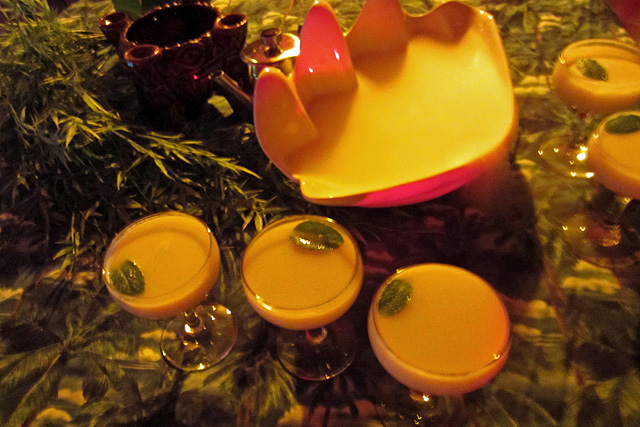 We were ushered upstairs and participated in a seance conducted by Herczeg, who then led us to a table and our next cocktail, Vagabond’s Ghost: white rum, coconut milk, lime and pineapple juices, creme de peche, Cava, Herbsaint mist. 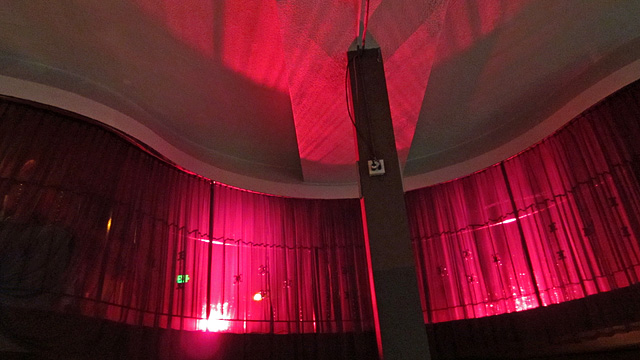 A glowing “lava flow” on the mezzanine

With Vagabond’s Ghost in hand, we descended the staircase into the main dining room, which was watched over by the glowering Tiki god, Volcan. The impressive production was designed by Kyle Arneson, who created a tropical oasis in what was an empty restaurant just days before. Arneson and Jackie Cadiente built the massive Tiki idol. “Eric Adkins, a production lighting designer, was also integral in transforming the space with lighting and effects, such as the warm flame-like rippling red light shining down from the second level.”

The Coconut Club draws inspiration from a wide range of influences. “We all have different points of view and interests under the Tiki umbrella (pun intended), from So Cal-centric Americana to pre-Tiki Caribbean cocktails to Eastern influence. With Vagabond’s House, our location was clearly a huge inspiration. We are all certainly fans of the storied L.A. bars such as the Tonga Hut (which Elana and I frequent), and the works of historians Jeff “Beachbum” Berry and Sven Kirsten. We were honored Sven attended [the second night] and lent us an original Vagabond’s House menu and the vinyl record of Don Blanding reading his poetry used in the seance!”

Herczeg brings an entirely different set of influences to his role as emcee, with “a decidedly kitschy approach in film and music as seen in his audio-visual collages throughout the event. 1980s Hawaiian action flicks, Kokomo, Fantasy Island, and David Bowie play alongside our twists on classic Tiki cocktails and reimagined pu pus, creating something altogether new.” Herczeg’s presence is vital – he remains in character with tongue planted firmly in cheek as he presents each course with a gong and an over-the-top intro.

“Darren completed the equation after our very first private test event (that he attended), which was lacking a little atmosphere. With his white suit, gong, and tropical tall tales, his ideas immediately elevated the experience from dinner party to interactive entertainment.” 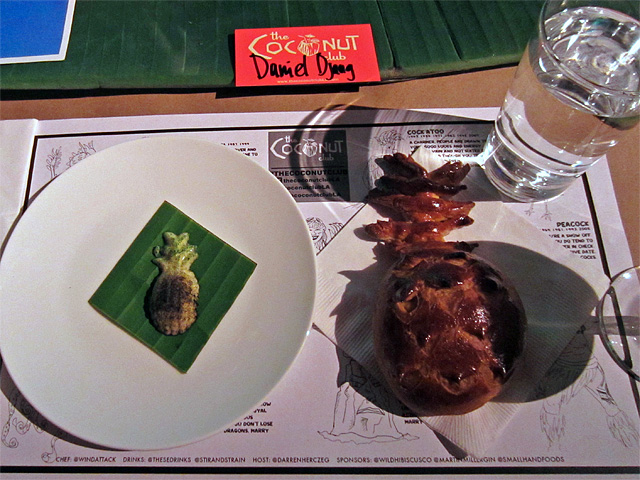 After we were seated, the multi-course dinner began with a pineapple-shaped sweet roll with pineapple butter. 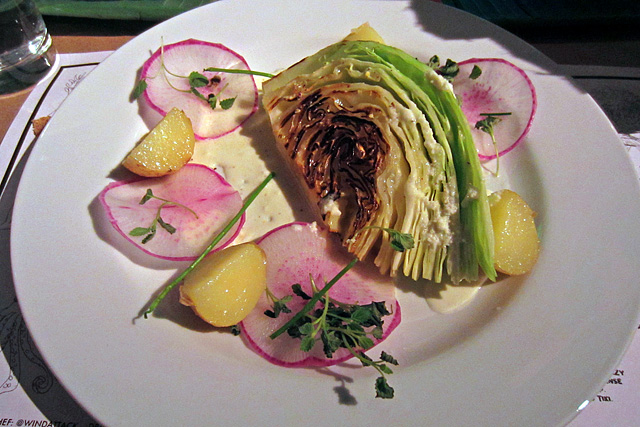 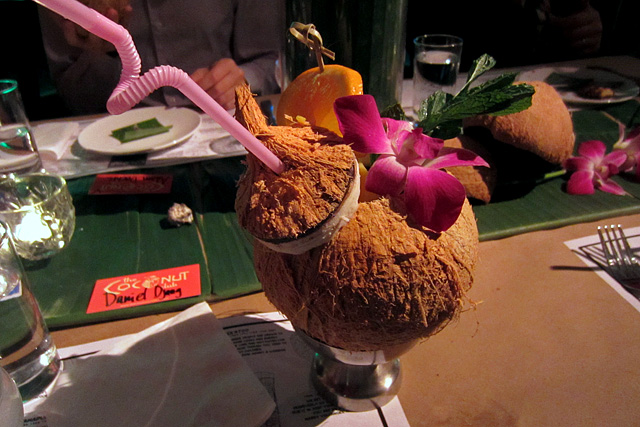 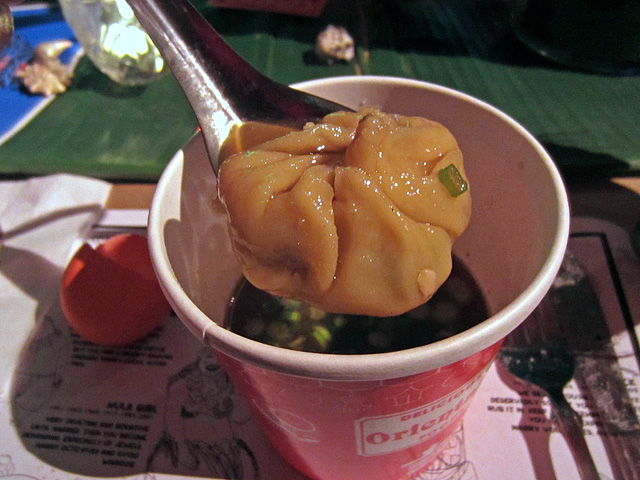 The next course was Egg Drop Soup, served piping hot in a Chinese takeout carton with a smoked shiitake tofu dumpling, scallion, and a “phoenix egg” that we were instructed to crack open into the savory charred-onion broth. 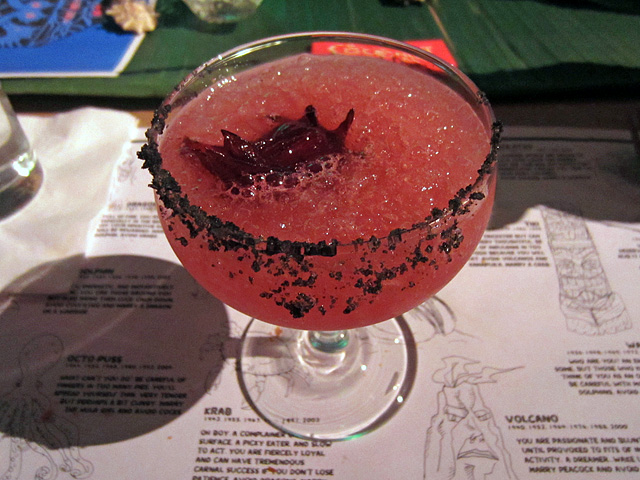 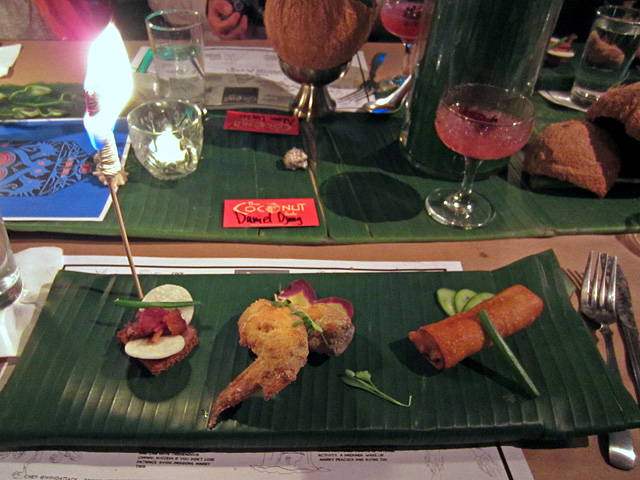 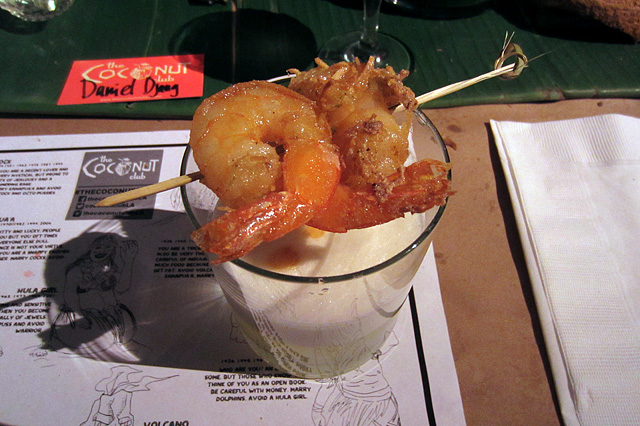 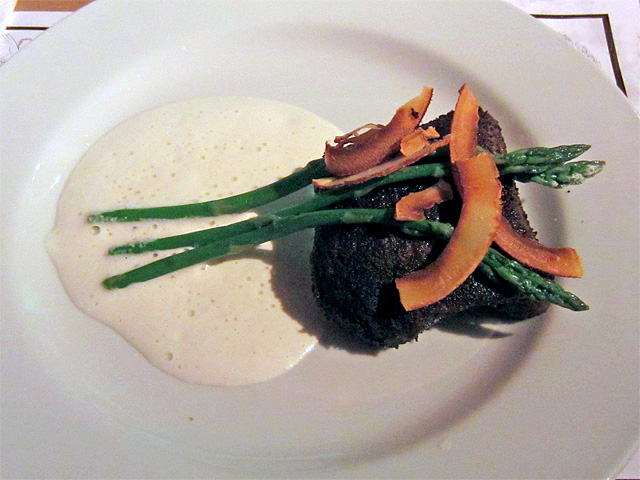 As it melts, the VOLCANO Cake starts to look like Major Toht’s face from the climax of “Raiders of the Lost Ark.”

The Coconut Club has grown considerably since their “proto-event” took place in February 2014 at the SEED Center, The Great Company‘s creative space in the Arts District.

“We had one long communal table and 20 people,” says Hazard. “We did not have an emcee, but had even more dishes, drinks and raw ideas. We hosted an early summer run in that same space (our first open to the public), before moving to Sonny’s Hideaway in Highland Park for late summer 2014 through winter 2015.”

“Since the beginning, we have certainly grown a community. Last fall, thanks to some good press we were selling out each event almost immediately.” The second and third nights of the Vagabond’s House run had much larger guest lists than opening night. “We had 40 guests Saturday and Sunday – our biggest to date, double our first event last year – and I have to say the jump was relatively seamless. Although serving 40 flaming VOLCANO Cakes all at once is certainly a daring feat, which we learned the hard way – but without casualties!”

The Coconut Club has partnered with various brands, including Selvarey Rum, Capurro Pisco, Wild Hibiscus Co., Martin Miller’s Gin, Solbeso and Small Hand Foods. “I think we have also been able to develop some of our early ideas into staples, such as the Piscolada Shrimp Cocktail and flaming Pu Pu Platter. The signature Coconut Club Cocktail, funny enough, has probably changed its recipe the most.”

Dive into The Coconut Club experience

As dinner approached the final gong, someone at our table remarked that it was much later than they thought. Indeed, The Coconut Club had cast its spell – with great reluctance, we left our island paradise and returned to the urban jungle of Los Angeles.

A night at The Coconut Club evokes the heyday of Stephen Crane and The Luau, when Polynesia met Tinseltown in a spectacular tropical setting that included waterfalls, fish tanks and giant “man-eating clams.” The Coconut Club’s retro vibe recalls a time when dinners were long and luxurious, people dressed up to go out, and theatrical entertainment was an integral part of the meal.

Planning is underway for the next series, currently scheduled for April-May 2015. For more info and event announcements, on-sales and updates, readers can sign up for The Coconut Club mailing list at TheCoconutClubLA.com.