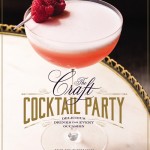 Julie Reiner: “The Craft Cocktail Party,” Entertaining at Home and the Importance of Mentoring 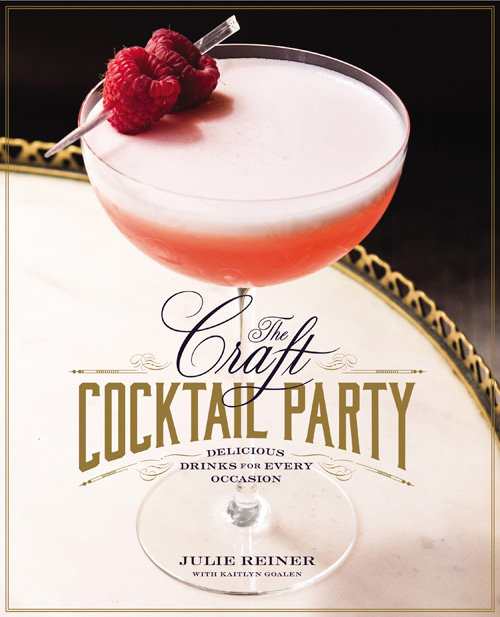 Bartenders and home enthusiasts alike are enjoying a golden age of cocktail books. From techniques and science to recipe collections from award-winning bars and in-depth histories of classic cocktails, there’s a myriad of new books for imbibers to add to their collections. Recent books include the updated and expanded second edition of David Wondrich’s seminal work, Imbibe!; gaz regan’s The Negroni; and Cocktails on Tap by Jacob Grier. In August, keep an eye out for The Cocktail Chronicles by Imbibe Magazine Executive Editor Paul Clarke, and October sees the release of The Dead Rabbit Drinks Manual.

Even in such esteemed company, a book by Julie Reiner is sure to stand out and capture the attention of cocktail enthusiasts. The acclaimed co-owner of Brooklyn’s Clover Club and the Flatiron Lounge in Manhattan has published The Craft Cocktail Party: Delicious Drinks for Every Occasion (Grand Central Life & Style). Named one of America’s “Top 10 Mixologists” by Food & Wine and nominated for a James Beard Award, Reiner has been featured in publications like the New York Times and Bon Appétit and has also appeared on the Today Show and the Food Network.

Touted as a book “that provides inspiration for the rest of us, and not only the cocktail geeks,” The Craft Cocktail Party is not intended to be a comprehensive bartender manual. Instead, the focus is on making cocktails at home for special occasions, gatherings large and small, or even a party of one. In a home setting, the rules are more flexible and the reader is encouraged to “take certain liberties.” The book sections are organized into the four seasons, which Reiner calls “my muses behind the bar.” Chapters feature a mix of holiday-inspired cocktails, classics and new creations, such as “From Tiki to Modern Tropical” in Summer, “Fireside Drinks” in Fall, “Sherry Sherry Christmas” in Winter and “Brunch” in Spring.

In her introduction, Reiner notes that when she was growing up in Hawaii, she was tasked with passing hors d’oeuvres at her parents’ cocktail parties while her mom served the drinks. Their love of hosting parties was passed down to Reiner, who says, “I love to entertain in my home! I think that we all have occasions over the year where we invite people into our home to celebrate. Whether it be a specific holiday, or a special life event, cocktails are always a great way to entertain family and friends.”

From her vantage point at the forefront of the craft cocktail movement, Reiner noticed a growing trend of cocktail aficionados hosting parties at home. “The idea for the book was sparked by the numerous emails and phone calls that I have received over the years from friends and family asking what they should make for various holidays and occasions. My sister-in-law and my mom have been great at giving me feedback on the punches and cocktails that I have suggested for them. It was very helpful to know what a non-bar industry person found easy or difficult to make in the home.”

Throughout the book, Reiner shares tricks, tips and techniques garnered from more than 20 years of experience as a bartender and bar owner. “I have created seasonal menus for my bars, and bars that I have consulted on over the years, which has enabled me to suggest recipes and give tips that I know will work in the home.”

Newbies will appreciate the inclusion of basic techniques that will have them stirring and shaking like a pro in no time, such as juicing citrus. “It amazes me that people buy pre-made juice like the ones that come in the plastic lemon [ReaLemon]. It’s not ‘real’ unless you juice it from an actual lemon. With a hand juicer, it takes about five minutes to juice enough for five cocktails. Simple syrup is another one. It really is simple! Do not waste your money on a bottled simple syrup, just combine equal parts sugar and water and stir.”

The Craft Cocktail Party was published in May, the same month that Reiner opened Leyenda – a Latin-inspired cocktail bar a block from Clover Club – with her protégée, Ivy Mix. Through Clover Club, Flatiron Lounge and her partnership with Audrey Saunders in Pegu Club, Reiner has mentored an entire generation of bartenders – many of them have opened their own bars in New York and across the country. 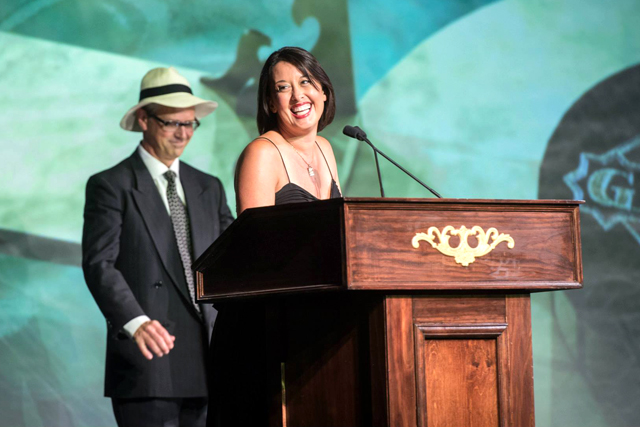 Reiner’s influence was acknowledged at the 2013 Tales of the Cocktail Spirited Awards, where she was named Best Bar Mentor. That same night, Clover Club took home the awards for Best American Cocktail Bar and Best High Volume Cocktail Bar. “Yes, 2013 was a great year for Clover Club and me personally! Ivy has worked for me for five years now, and is a real powerhouse! I noticed right away that she had a work ethic that was unusual for someone her age. She came to me with the idea for Speed Rack, which I thought was brilliant. I gave her a little bit of advice on how to make it happen, and the next thing I knew I was judging the first-ever Speed Rack competition. It was very impressive to watch her pull it off, and to keep it going for four years now.” 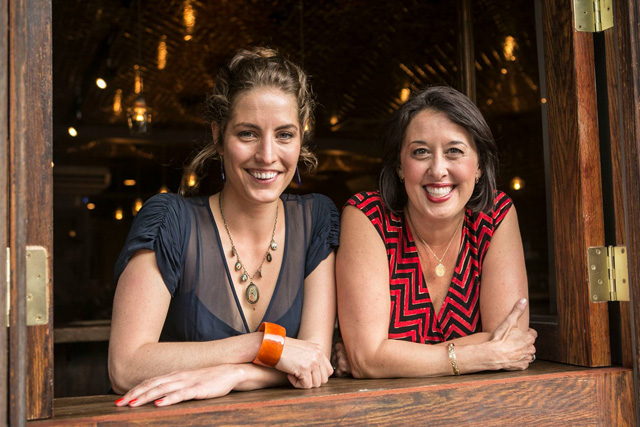 Ivy Mix and Julie Reiner at Leyenda | Photo courtesy of Leyenda, via Facebook

“Mentoring my staff, and helping them realize their dreams is very important to me,” says Reiner. “I want to see the industry grow, and in order to do that I have to let my bartenders follow their own path. That often means losing them, but in the end, they are more engaged while they work with us, and they are ultimately fulfilled in their own lives…which makes me happy. Ivy has an entrepreneurial spirit much like myself. I see 30-year-old me in her quite often. Leyenda [is] her first bar, I can’t wait to see where she takes it!”

After the jump, two cocktail recipes from The Craft Cocktail Party, the Maria sin Sangre and the Uncle Buck. 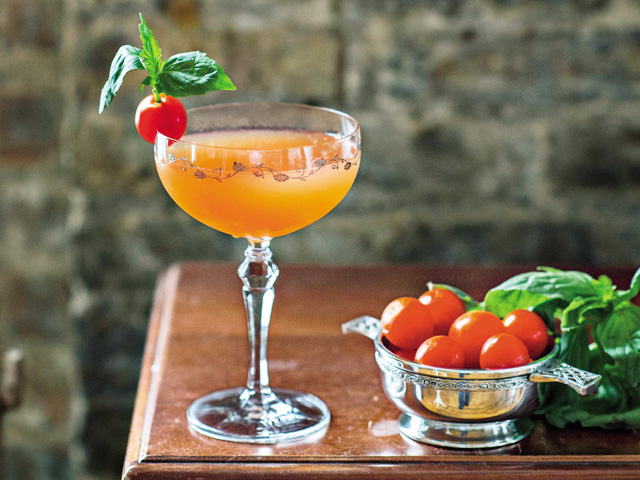 Maria sin Sangre
Think of this drink as a Bloody Mary on the fly. Forget the canned tomato juice; here, the freshness of summer’s favorite fruit is muddled directly into the drink.

Method:
In the bottom of a shaker, muddle the tomatoes and basil in the simple syrup. Add the tequila, sherry, lemon juice, salt, and pepper and shake with ice until chilled. Double strain through a fine mesh sieve into a coupe glass.

Pro Tip:
To make this drink in larger yields, pulse the tomatoes and basil in a food processor 5 or 6 times, then strain through a fine-mesh sieve or a piece of cheesecloth and discard the solids.

Excerpted from the book THE CRAFT COCKTAIL PARTY by Julie Reiner with Kaitlyn Goalen. © 2015 by Julie Reiner. Reprinted by permission of Grand Central Life and Style. All rights reserved. 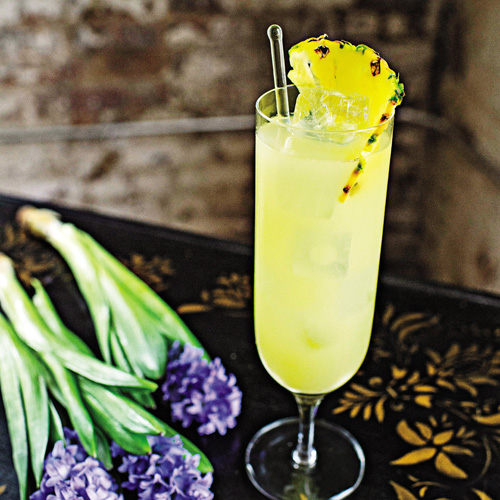 Uncle Buck
Brad Farran, one of our former head bartenders at Clover Club, came up with this buck (a family of refreshing ginger drinks), and it quickly became a favorite of mine. The interplay between the herbal nature of the Chartreuse and the bright zippy notes of tequila and pineapple is magical and unexpected.

Method:
Shake the tequila, Chartreuse, pineapple juice, lime juice, and ginger syrup with ice until chilled. Strain into a Collins glass filled with ice. Garnish with the pineapple slice inside the glass.

Excerpted from the book THE CRAFT COCKTAIL PARTY by Julie Reiner with Kaitlyn Goalen. © 2015 by Julie Reiner. Reprinted by permission of Grand Central Life and Style. All rights reserved.