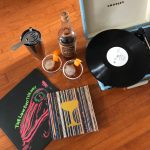 Booze and Vinyl: Two of Your Favorite Things in One Cocktail Book 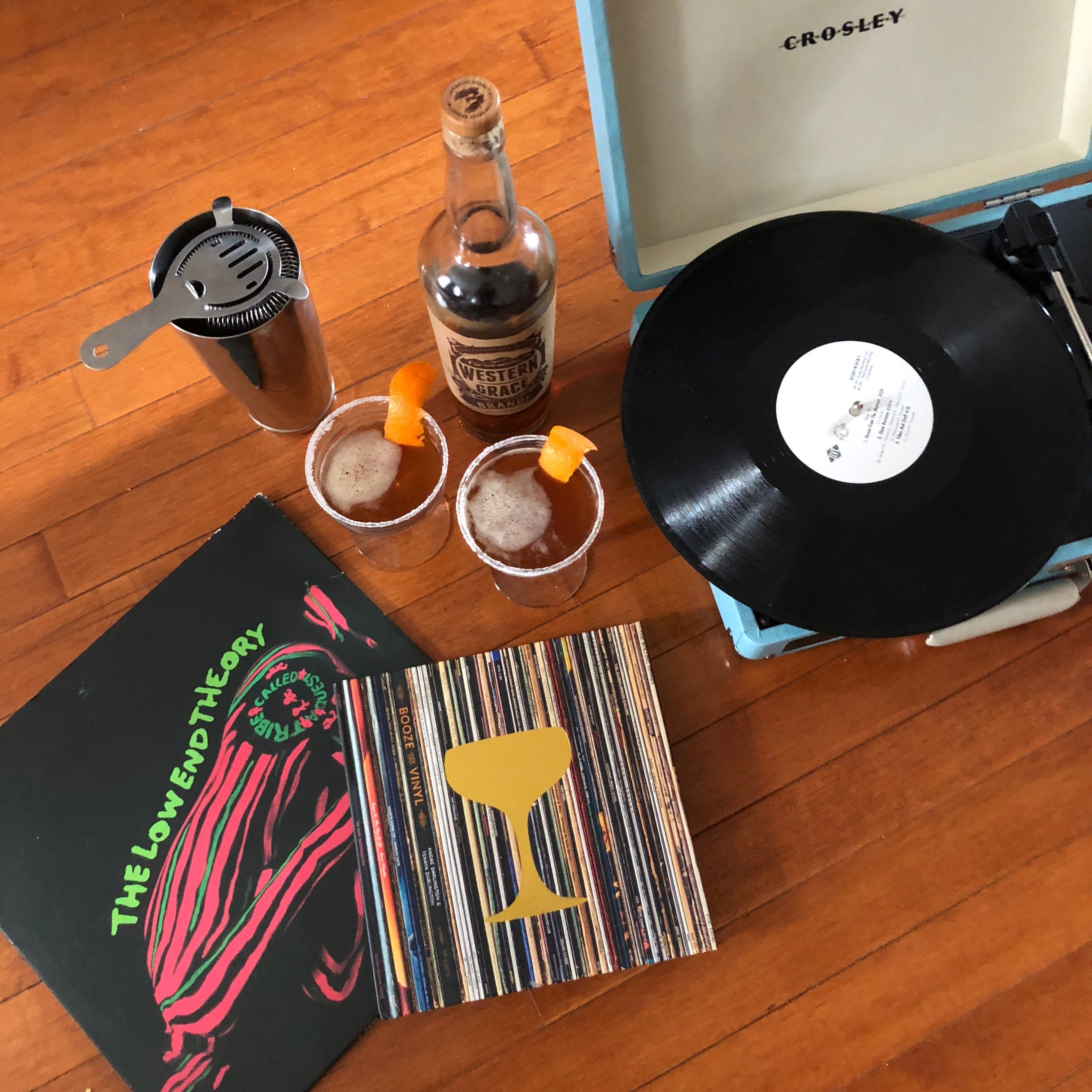 Filed under “Books I Wish I Wrote”: Booze and Vinyl features 70 iconic albums from the 1930s through the 2000s, with every album paired with a “Side A” and “Side B” cocktail to create a two-drink listening session. Published by Running Press on April 17 – a few days before Record Store Day – Booze and Vinyl is the latest book from the brother-and-sister writing team of André and Tenaya Darlington, the co-authors of The New Cocktail Hour and Turner Classic Movies: Movie Night Menus. 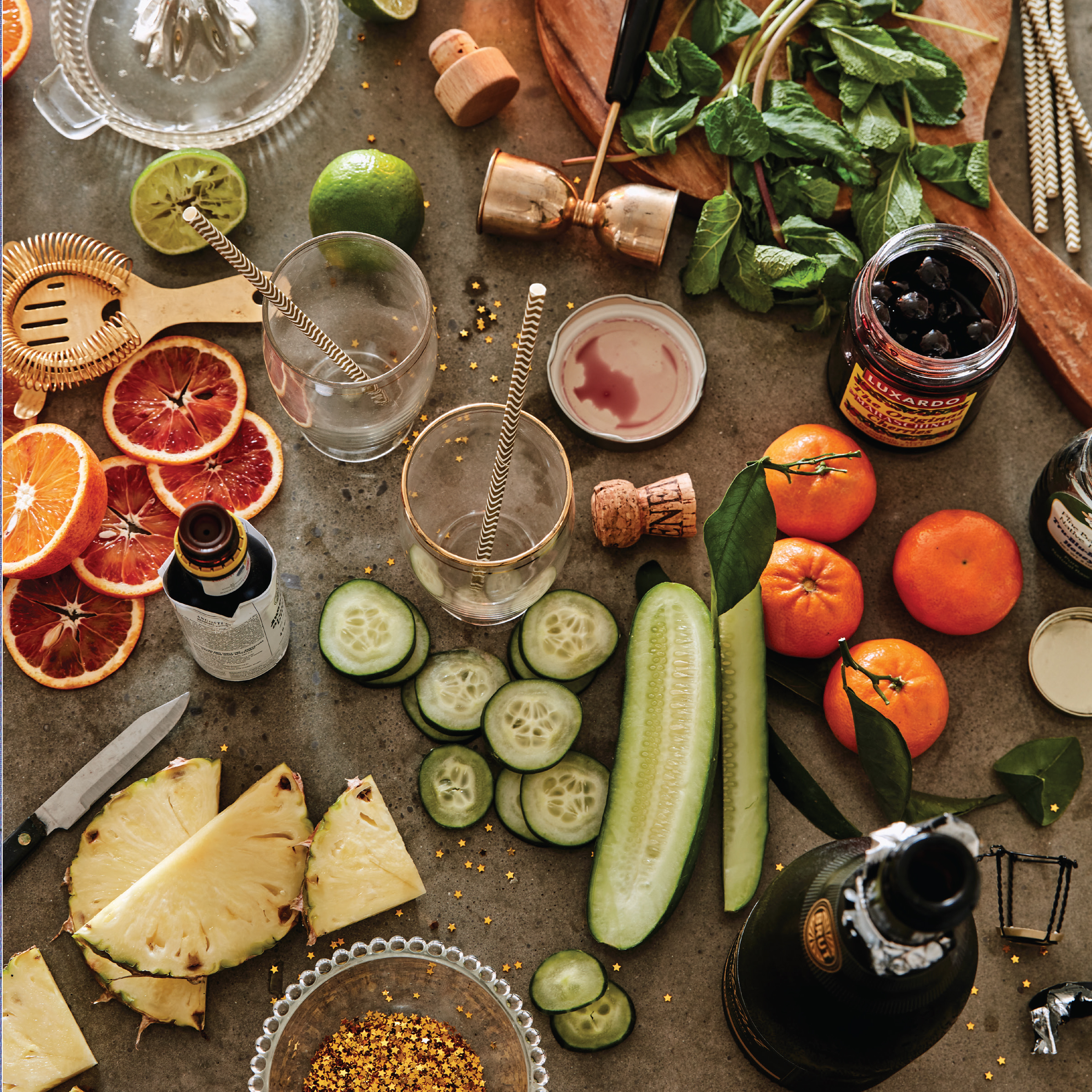 Champagne Cup, the Side B cocktail for “The Rise and Fall of Ziggy Stardust and the Spiders from Mars” | Photo by Jason Varney, courtesy of Running Press

Booze and Vinyl is organized into four sections: Rock, Dance, Chill, and Seduce – albums are arranged chronologically within each section. Each entry has liner notes about the artist and album, along with a party idea (“When to Spin”). And throughout the book there are small plate recipes (“Munchies!”), like the southern-style chicken sandwiches with honey and avocado slaw to nibble on while you’re listening to Robert Johnson’s King of the Delta Blues Singers.

As a Prince superfan, of course I immediately flipped the book open to Purple Rain. The Darlingtons did right by His Royal Badness – the classic Aviation for side A, paired with the lesser known Fallen Angel (“It screams Prince, since it’s lavender in color and full of bubbles.”).

According to a Q&A with the authors, their passion for music can be traced back to their childhood. “Our dad was a professional musician and a vinyl collector,” said Tenaya. “When we were kids, he played records every night and hosted listening parties with his friends. My earliest memories are a swirl of adults drinking cocktails on couches (usually Gin & Tonics) while André and I took turns flipping records on our dad’s Thorens turntable.”

The Side A & B cocktails were selected for various reasons. “Sometimes, the pairings follow an album’s entire mood,” said André. “In other instances they follow a particular song, such as the Bohemian Cocktail for Queen’s Bohemian Rhapsody.”

Tenaya adds, “We tried to choose drinks that fit a vibe. For example, we think of Iggy Pop’s Lust for Life as THE album you want to play before you go out to see a live show. While you’re primping in the bathroom to Side A, you want a Dirty Martini perched on the edge of the sink. By the time you flip to Side B, you’re ready for a Corpse Reviver. 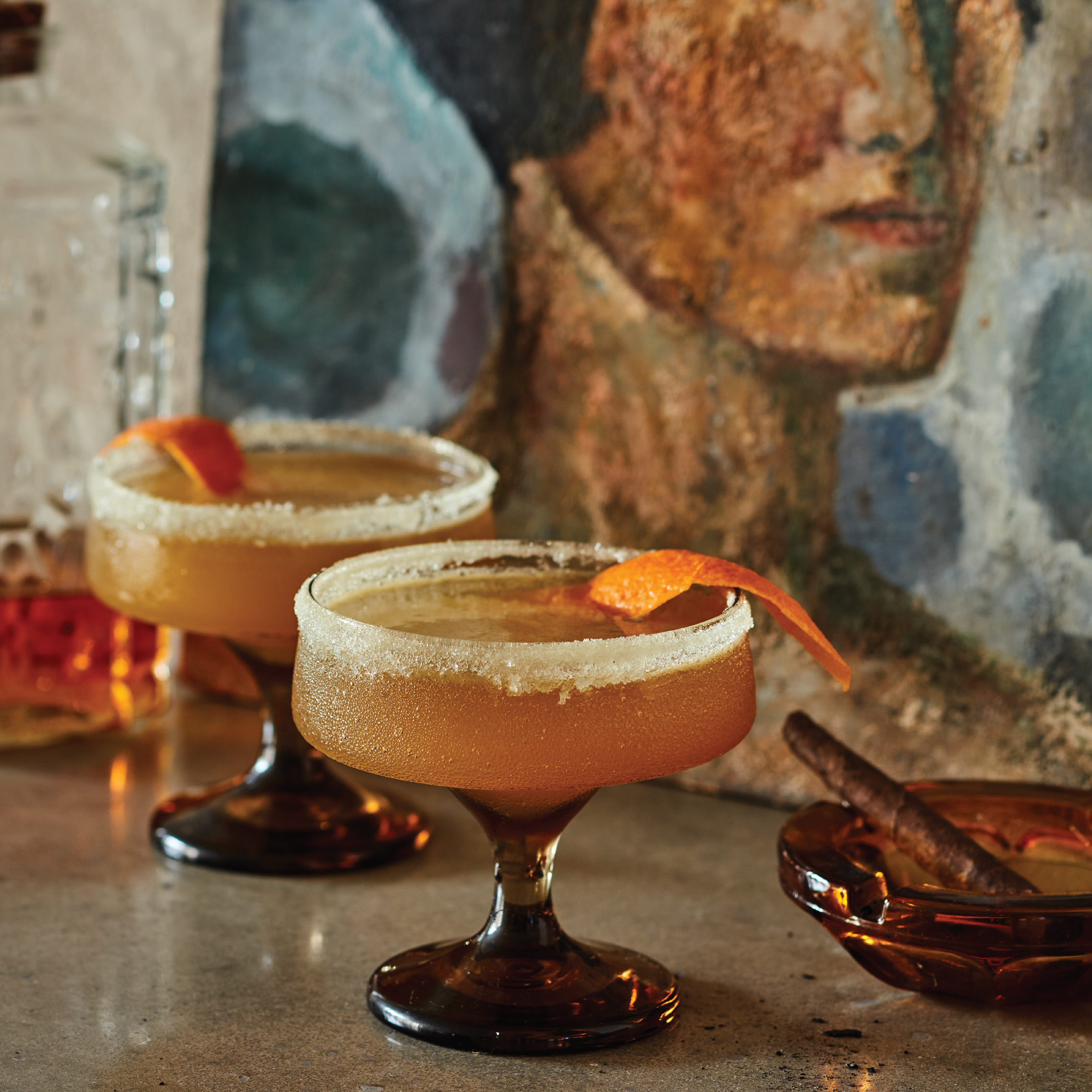 Sidecar, the Side B cocktail for “Low End Theory” | Photo by Jason Varney, courtesy of Running Press

Case in point is the Sidecar, their pick for Tribe’s Low End Theory Side B cocktail – it’s described in the book as “the signature drink of the great American Jazz Age” and “a swanky accompaniment to this uplifting, jazzy masterpiece.”

The Darlingtons also called out a few of their favorite listening party pairings. “Digging, we found the cocktail menu for Max’s Kansas City in New York – the spot where all the cool bands used to hang out,” said André. “The cocktail for Blondie in the book is the Blondie Cocktail, straight off the menu at Max’s when Debbie Harry and crew were hanging out there! There’s also a Brass Monkey for the Beastie Boys, of course. I also love the Hellfire Punch pairing for Led Zeppelin. It’s a historically accurate recipe from this 18th century group of miscreants in London called the Hellfire Club. Cocktail historian David Wondrich presented this recipe at Tales of the Cocktail in 2016, and it just fits perfectly with what the band was into while recording IV.”

Tenaya said, “I love our pairings for The Doors’ first album, which we themed out as a ‘Psychedelic Sleepover.’ Side A is a Whiskey Daisy – a franken-daisy of sorts made with whiskey, Cointreau, lemon juice and soda water. It’s served in a tall glass with an orange wheel and a sprig of mint – very refreshing to sip on during “Light My Fire.” Side B is a Bijou. I absolutely love a Bijou – it’s got a neon green cast. Very trippy, very 1967.” 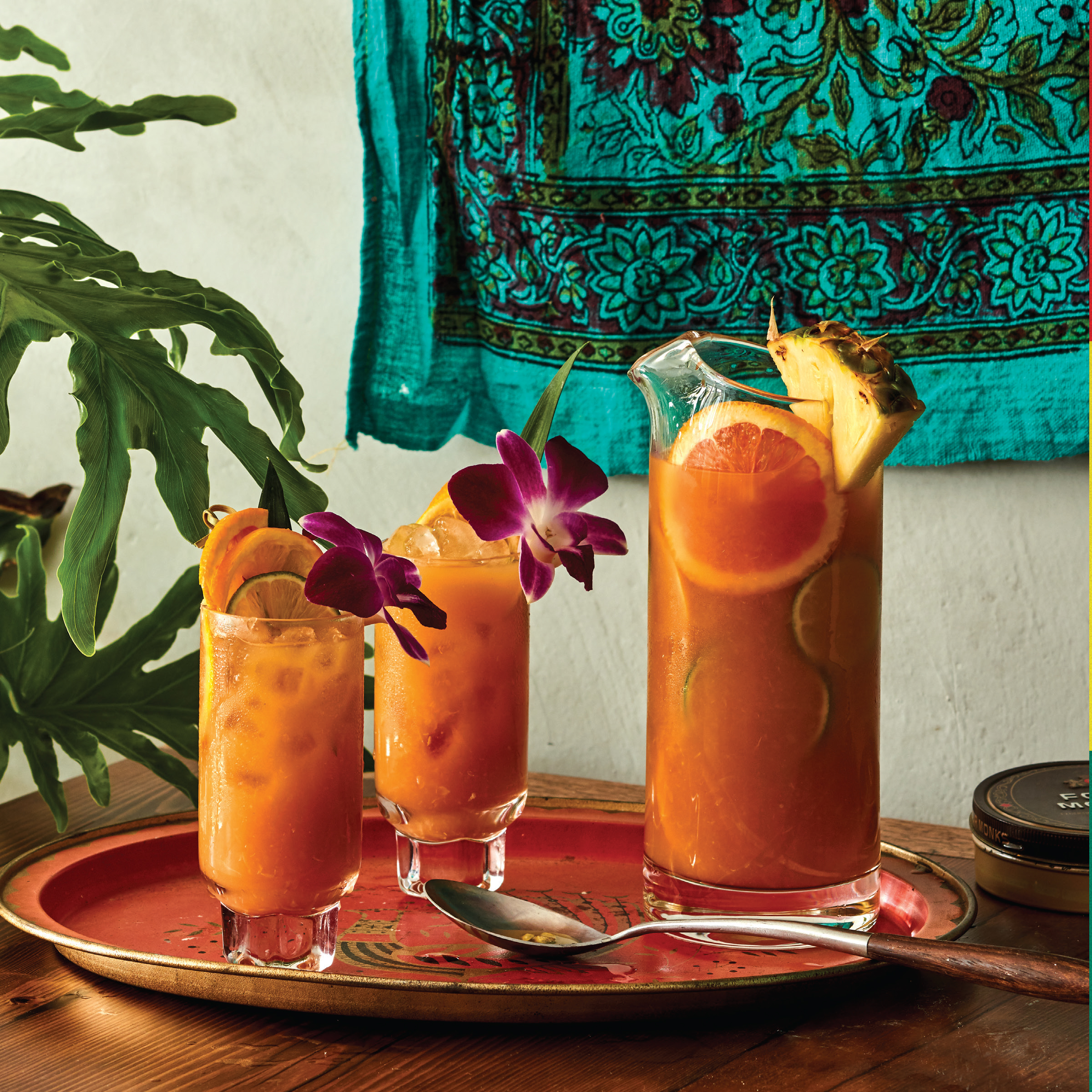 Planter’s Punch, the Side A cocktail for “Legend” | Photo by Jason Varney, courtesy of Running Press

André discovered a newfound appreciation for Bruce Springsteen during the writing process. “I’d listened to him since childhood, but I didn’t expect to put on Born to Run quite as often as I did while working on this book. Call it a revitalized addiction. I think in context of all the other albums, I heard its raw originality in a new way. I feel like I finally ‘got’ Springsteen. That, and a rekindled love for R.E.M.’s Automatic for the People. I loved the album when it came out, but didn’t expect to connect with it so much twenty-five years later. It’s aged so, so well.”

For Tenaya, it was Carole King’s Tapestry – “… it’s so full of warm feeling and bright energy. It’s exactly what I want to listen to on a Sunday afternoon or when I need a change of mood. King’s voice glows with a heartfelt ordinariness that I connect to – it’s like overhearing a friend sing to you. And the songs are so reassuring. I’m thinking of “Beautiful” and “You’ve Got a Friend” – those tracks are like Sesame Street songs for grown-ups, in a good way! Amazingly, King was the first solo female artist to win Record of the Year, which is fascinating since this album is not sexy or flashy in any way. It’s just pure comfort. Also, I love the Tapestry album cover. When I look at King curled up on a window seat and staring out her rainy window, I just want to sit down and write.”

Booze and Vinyl is now available from Running Press.

And after you’ve dropped the needle on Booze and Vinyl, check out the deep cut selections from fellow vinyl nerds that were inspired by this fantastic cocktail book.