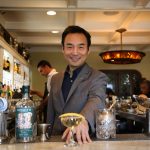 Ten Moments from Ten Years of Thirsty in LA 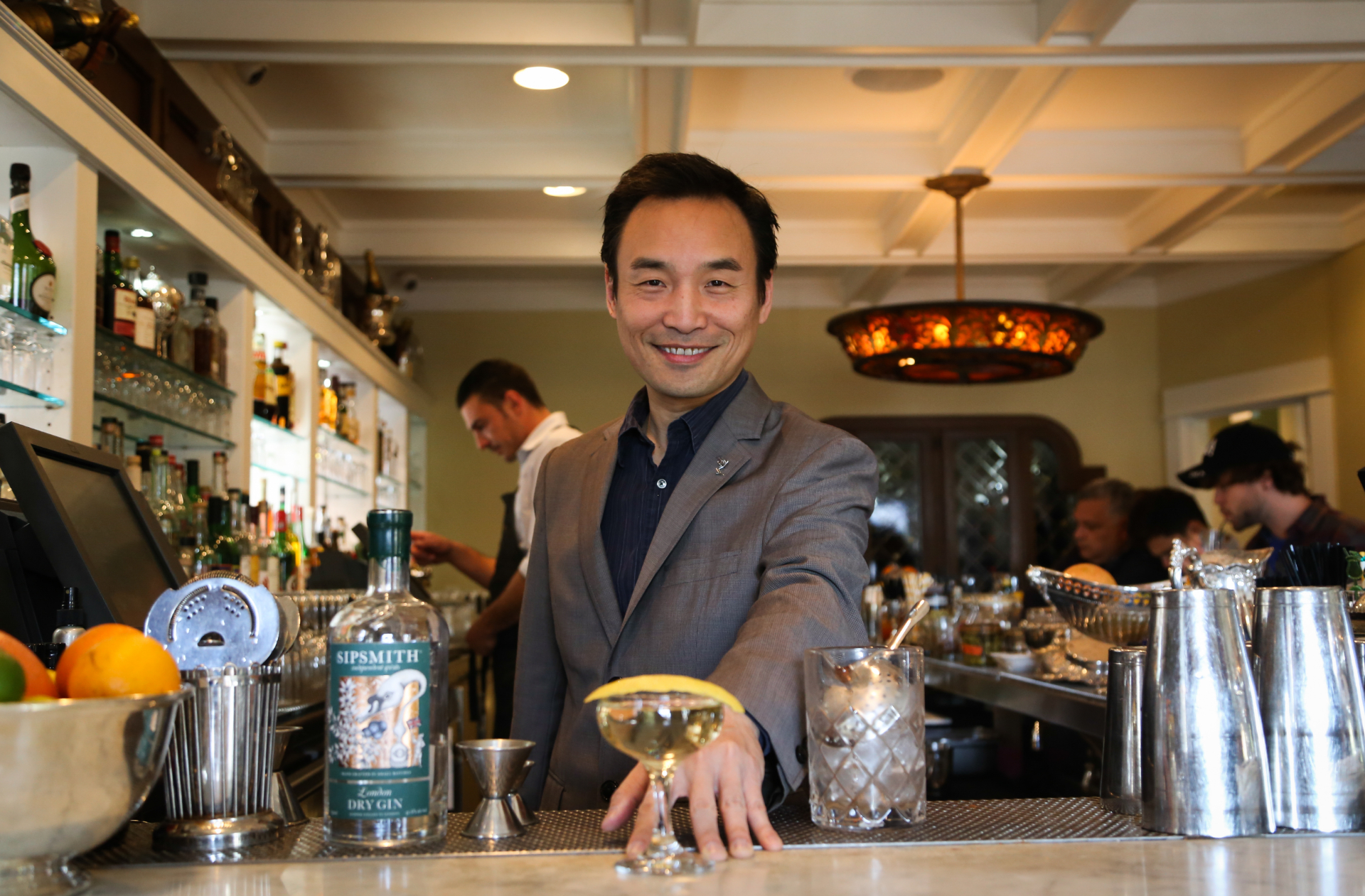 When Thirsty in LA debuted on May 13, 2009, Los Angeles was emerging from the doldrums and becoming a cocktail mecca – Rivera, The Varnish and Copa D’Oro were in the vanguard of L.A. bars that would eventually garner local and national attention. There will always be landmarks like Musso & Frank Grill (celebrating its centennial this year!) and Tonga Hut, but the L.A. cocktail scene will be driven forward by bars like Bibo Ergo Sum and Genever – the next generation of owners and bartenders that are truly passionate about what they do, with roots in the city, and a shared vision that the best is yet to come.

It’s been my honor to write about some of the best bartenders, world-class bars and extraordinary spirits here in my hometown, across the country, and around the world. Following are ten of my favorite L.A. moments from ten years of Thirsty in LA. Cheers! 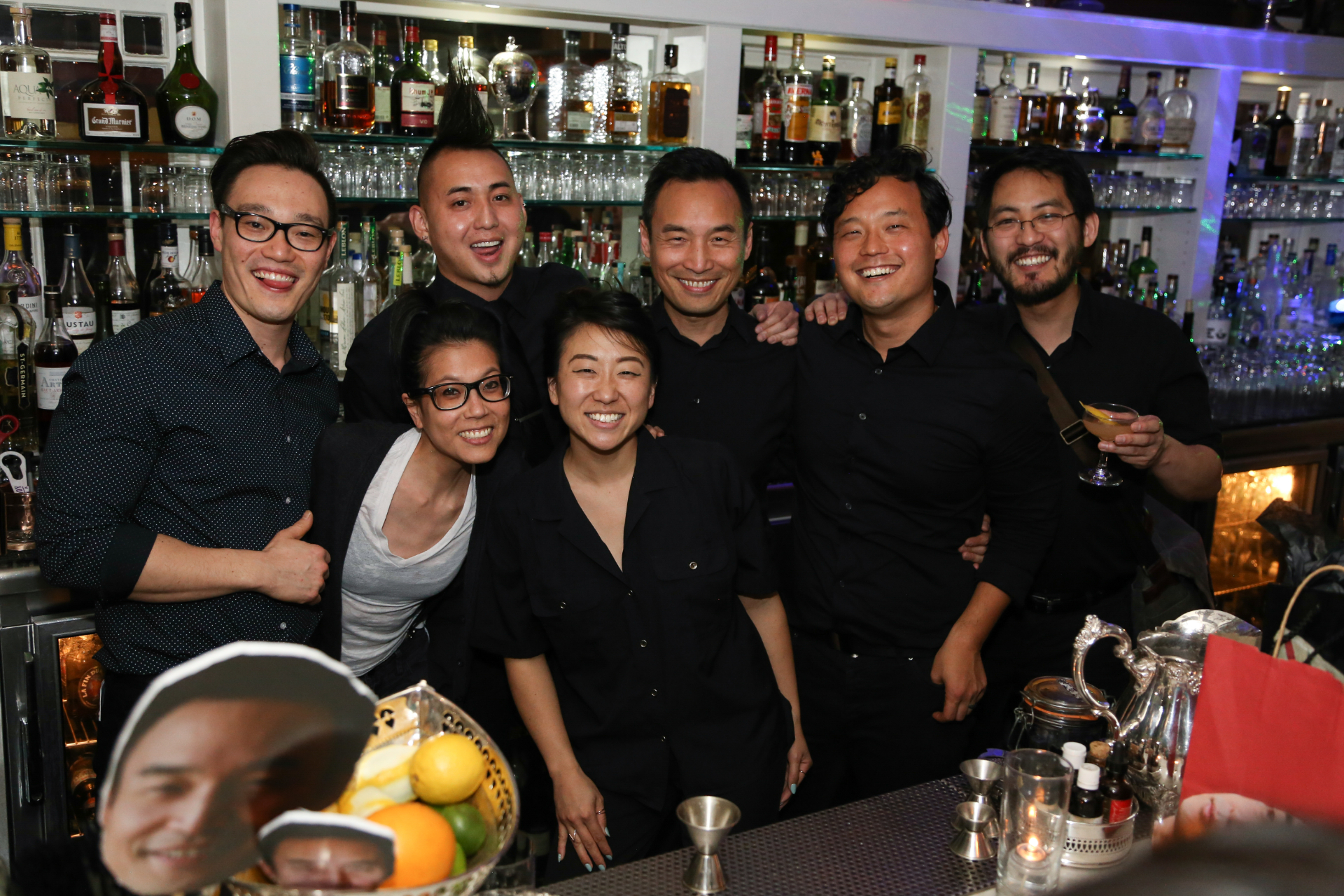 My beloved bar fam at Big Bar is renowned for going all out with their events, and they hosted an incredible, unforgettable party for my 50th birthday in March 2017.

It’s an unwritten rule that I must have a 50/50 before I close a tab at Big Bar, so the featured cocktail for my birthday month was Cari Hah‘s 50/50 at 50, featuring one of my faves, Sipsmith Gin. (recipe below) 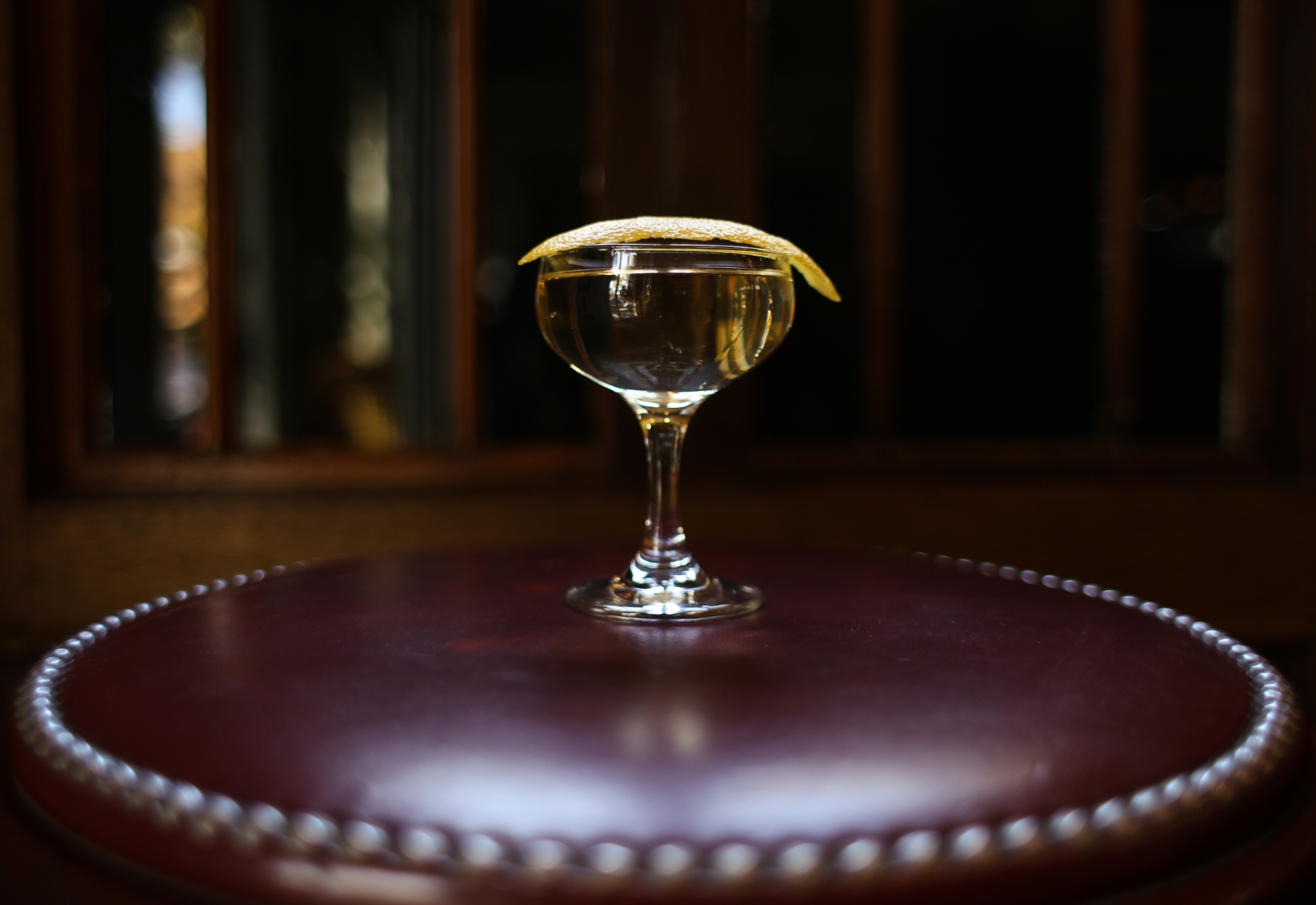 On the big night, the cocktail menu featured the 50/50 at 50, the Historic Core by John Coltharp, the Taco Truck by Beau DuBois, and the Pegu Club – I included this classic because a couple of years before I launched the blog, I sat in front of Joel Black at Comme Ça. He made me a Pegu Club, explained its history, and planted the seed for me to delve further into the world of classic and modern cocktails. 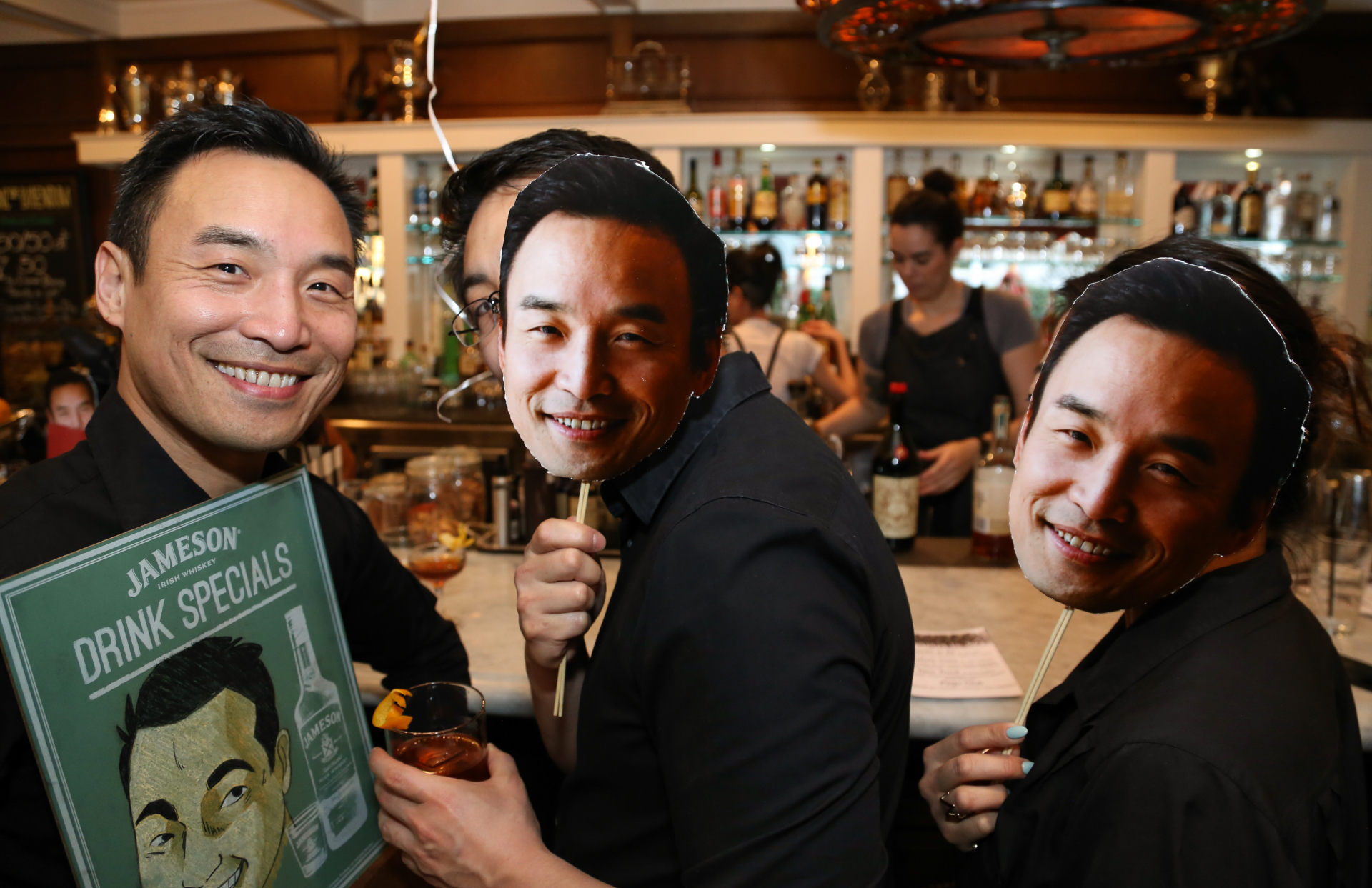 The stellar guest bartender lineup played up the running joke that all Asian bartenders look alike – “all of the Daniels” behind the stick were Aly Iwamoto, Cari Hah, Chris Shin, David Oui, Eugene Lee, Ken Baranda and Tatsu Oiye. Eugene asked me to create an autobiographical Spotify list, and the festive decor included lasers and totally-not-creepy photos of my face on sticks everywhere.

It’s a night that I will always treasure, with eternal gratitude to the Big Bar crew and everyone that came out to help me celebrate.

It all started, as many things do, with a conversation in a bar. In November 2011 I was having drinks at Sunny Spot with Zahra Bates – the National Brand Ambassador for Courvoisier was at the time the Bar Manager at Providence. (Congrats on the long-overdue James Beard Award, Michael Cimarusti!) The conversation turned to how many of her peers had a creative pursuit outside of bartending, from painting to photography, music and DJing. And by coincidence, our bartender, Brian Butler was a graphic designer and artist.

The idea of a showcase for bartender artistry was discussed and quickly circulated in the L.A. bar community, but Zahra and I assumed someone else would organize it. A few months later, the showcase became a hot topic again – Zahra and I decided that we would produce the inaugural Art Beyond the Glass at Sadie on June 17, 2012. That first event was a spectacular success, and since then ABTG has expanded to Oklahoma City, Chicago, Oakland and New York. ABTG has donated more than $171,000 to local arts nonprofits across the country, and by the end of the year, we’ll cross the $200,000 milestone.

SHAMELESS SELF PROMOTION: Tickets for the eighth annual Art Beyond the Glass on Sunday, June 23 are now on sale at Eventbrite.

Art Beyond the Glass: Thank You Los Angeles! 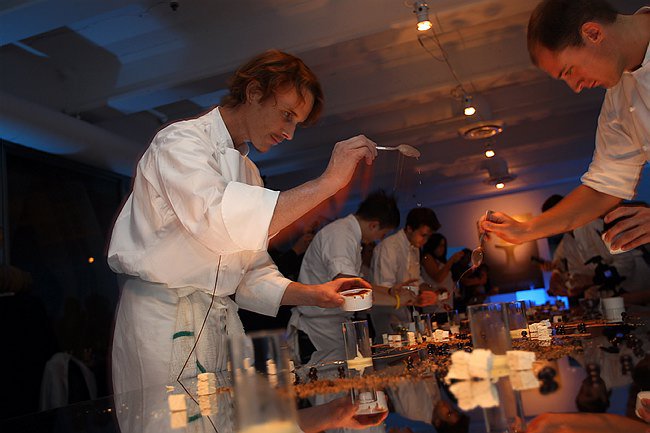 Grant Achatz and the Alinea chefs paint on their glass canvas at Absolut Achatz in L.A. | Photo: Soul Brother Photography for Pernod Ricard

I’ve been lucky enough to be invited to numerous activations over the years, but the Absolut Sensory Analysis Workshop and Sensory Dinner in 2010 ranks among the best. Hosted by Simon Ford, the day-long session began with the Sensory Analysis Workshop, which featured a nosing competition, a seminar on texture and flavor led by Grant Achatz, and the Vodka Speakeasy with David Wondrich. The event culminated with a mindblowing multi-course dinner and cocktail experience prepared by Achatz and his team from the three Michelin-starred Alinea.

Alexei Romanoff at The Black Cat

A plaque mounted on the exterior of The Black Cat in Silver Lake reads:

The Black Cat
Site of the first documented LGBT civil rights demonstration in the nation
Held on February 11, 1967
Declared 2008
Historic-Cultural Monument No. 939

The Stonewall Inn in New York is widely regarded as the flashpoint that gave rise to LGBT pride. However, the original Black Cat, which was the site of a peaceful demonstration that took place two and a half years before the 1969 Stonewall riots, is considered by many to be the birthplace of what eventually became the global LGBT civil rights movement.

In 2015 I interviewed Alexei Romanoff, who is perhaps the last surviving participant of the pioneering civil rights demonstration that took place outside the bar in 1967. A Ukrainian immigrant, Romanoff was a bartender who opened a gay bar called the New Faces, located just down the street from The Black Cat. (New Faces later became Circus of Books.)

Spending an afternoon with Romanoff was incredibly inspiring – he was 79 at the time and just as passionate as ever about LGBTQ civil rights. A few years later, Romanoff was named Grand Marshal of LA Pride 2017. And as we’ve seen with the meteoric rise of Alexandria Ocasio-Cortez, never underestimate a bartender. 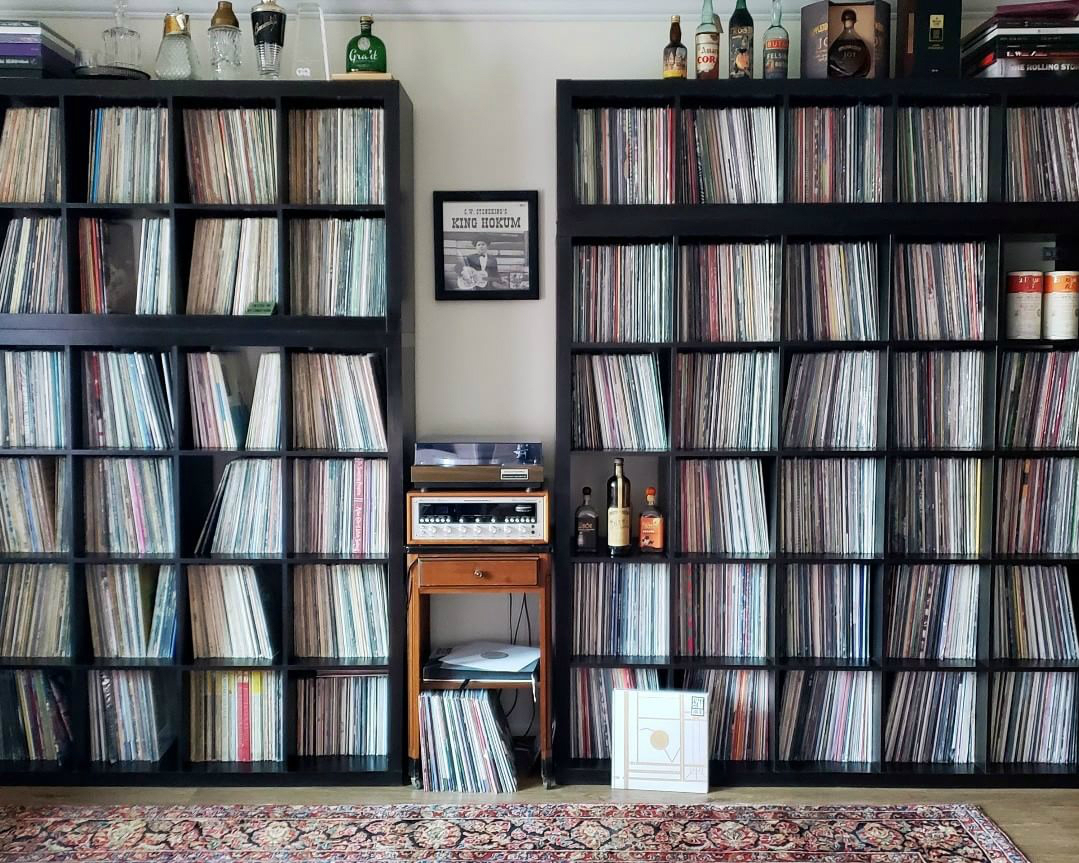 This post wasn’t based in L.A. per se, but regardless is one of my favorites for its mashup of cocktails and music. The post was inspired by Booze and Vinyl, the latest book from the brother-and-sister writing team of André and Tenaya Darlington, which features 70 iconic albums from the 1930s through the 2000s, with every album paired with a “Side A” and “Side B” cocktail to create a two-drink listening session.

I reached out to fellow crate diggers in the bar industry for their own album/cocktail pairings, and as expected the results were wide-ranging and eclectic, from LA.-based friends to legends like Brother Cleve and Gavin Hardkiss. 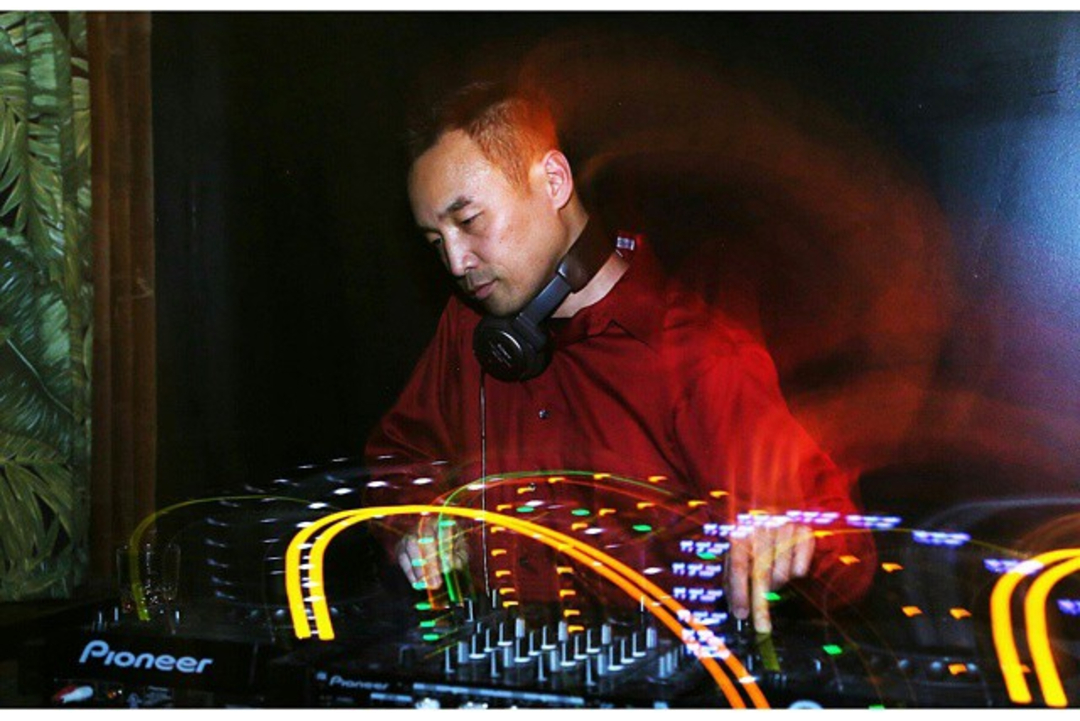 On the decks at General Lee’s on Chinese New Year in 2015 | Instagram: @eugeneshoots

I was a DJ several lifetimes ago and hadn’t spun a set since well before I started Thirsty in LA – until Zahra brought me out of “retirement” to DJ at a fundraiser that she organized at The Pikey in November 2014.

It was an honor to DJ at three special events during Christopher Day‘s tenure at General Lee’s in Chinatown, and each had their own significance. The first was Chinese New Year’s Eve in February 2015. Thanks to its location in Central Plaza, General Lee’s is at the heart of L.A.’s CNY celebrations – the firecrackers outside at midnight were deafening and nearly eclipsed the sound system. As luck would have it, we were ringing in the Year of the Sheep – my Chinese zodiac sign.

Later that year, I DJed with Dino Soccio to celebrate the 75th birthday of the legendary Bruce Lee on November 27. Proceeds from the event went to the Bruce Lee Foundation. Not only is the famous seven-foot statue of Bruce Lee located in Central Plaza, but General Lee’s is also just a few blocks from the former site of Bruce Lee’s Jun Fan Gung Fu Institute at 628 W. College St.

I’m a huge Prince fan, so it was a bittersweet night when I played an all-vinyl set of the Purple One’s music to celebrate what would have been his 58th birthday on June 7, 2016 – the first since his death in April that year. Chris organized a reunion of the Playa bar crew, which added another layer of awesomeness to the party.

On the night of Frank Sinatra’s 100th birthday in 2015, Jack Daniel’s National Brand Ambassador and Dirty Sue founder, Eric Tecosky hosted an intimate gathering inside Studio B at the famed Capitol Studios in the landmark Capitol Records Building. The first album recorded at Capitol Studios was Frank Sinatra Conducts Tone Poems of Color – since the Chairman of the Board christened the studios, the Beach Boys, Nat “King” Cole, Sir Paul McCartney, and many more music legends recorded some of the most iconic music in history at Capitol Studios. 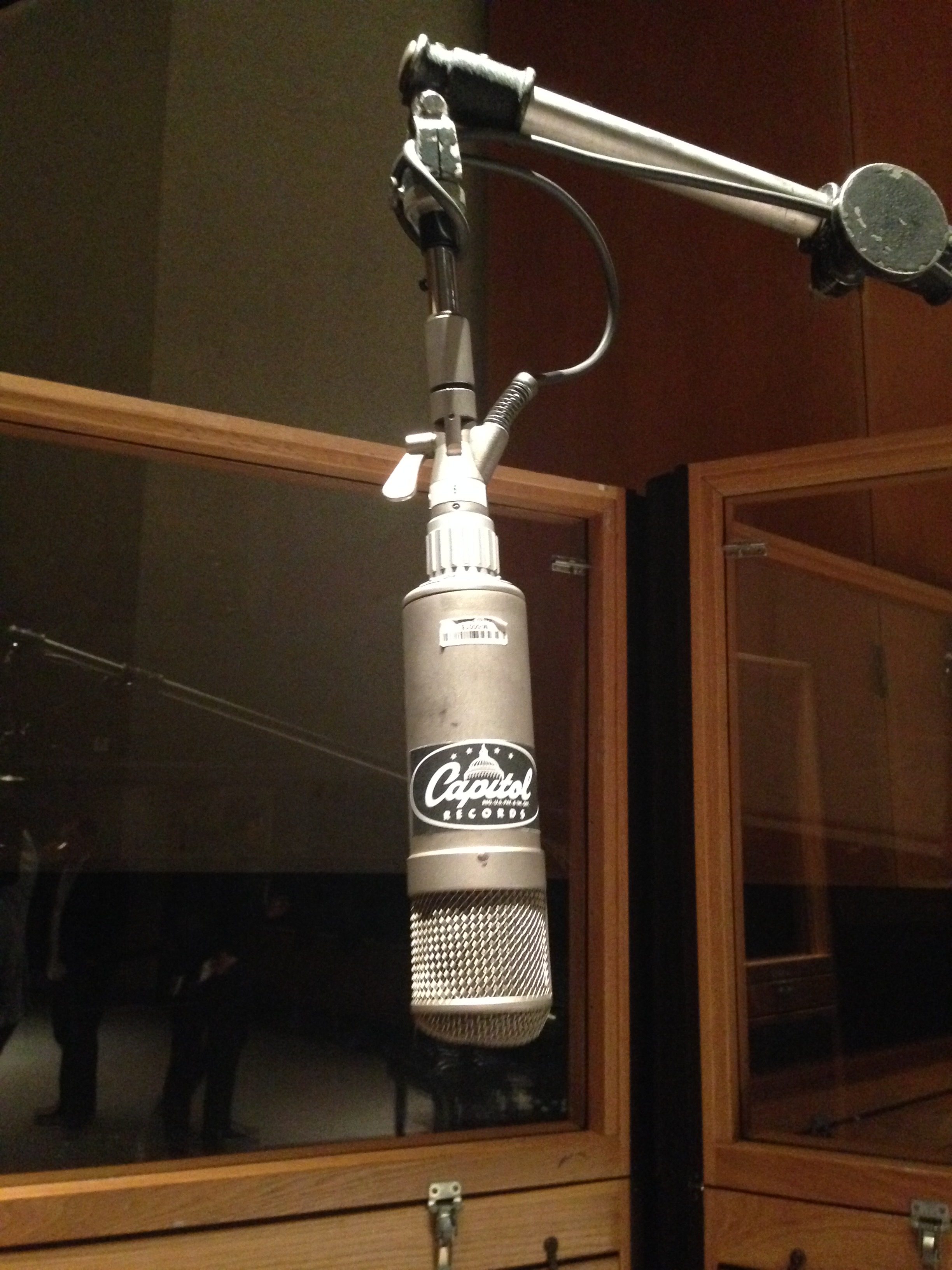 For this longtime Sinatra fan and music buff, stepping into Studio B was a sublime experience. We toasted Ol’ Blue Eyes with drams of Jack Daniel’s Sinatra Select and the 100-proof Sinatra Century, a limited release bottled from only 100 hand-selected barrels. Every collector’s box of the Sinatra Century included a previously unreleased soundtrack. 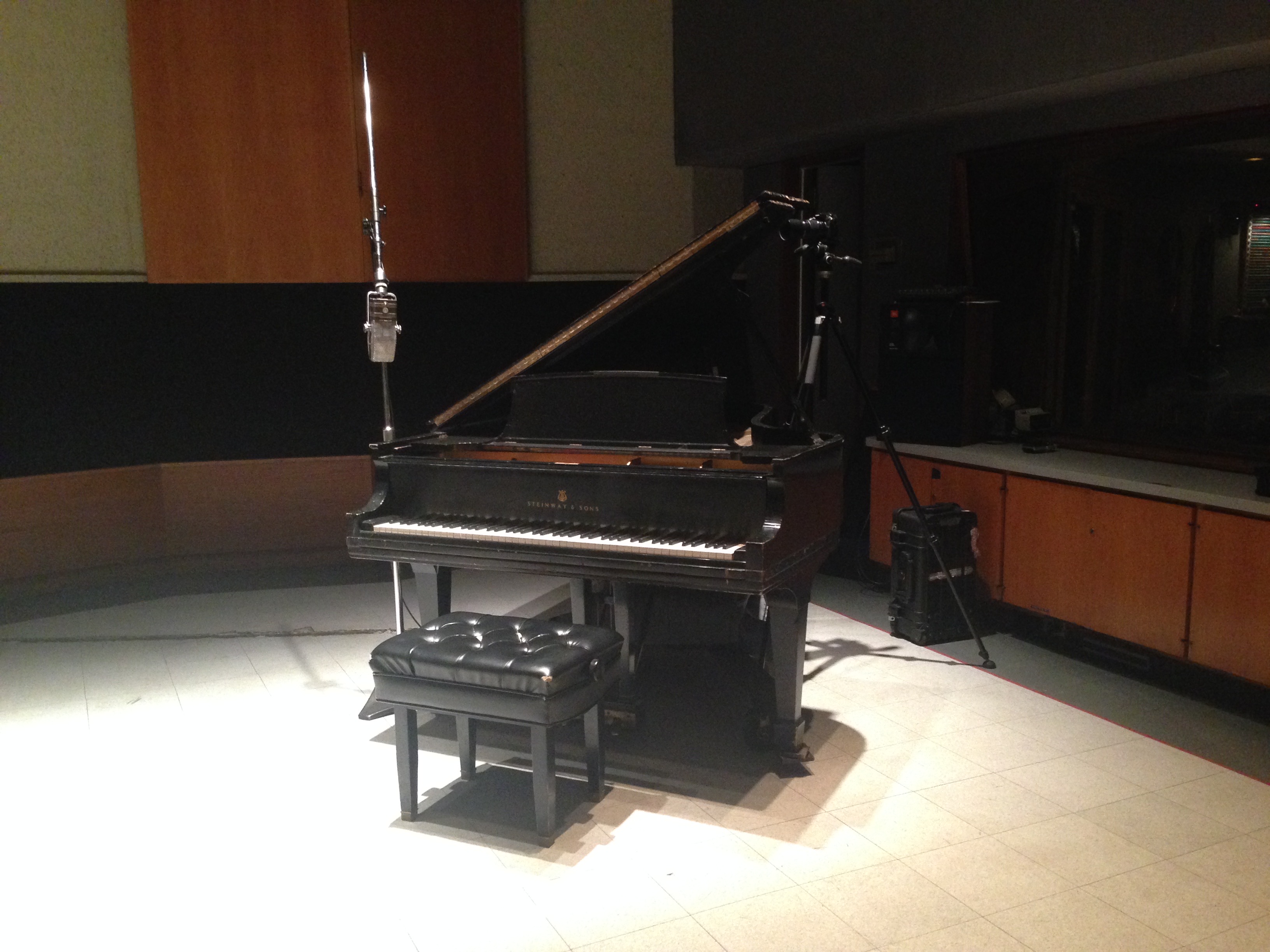 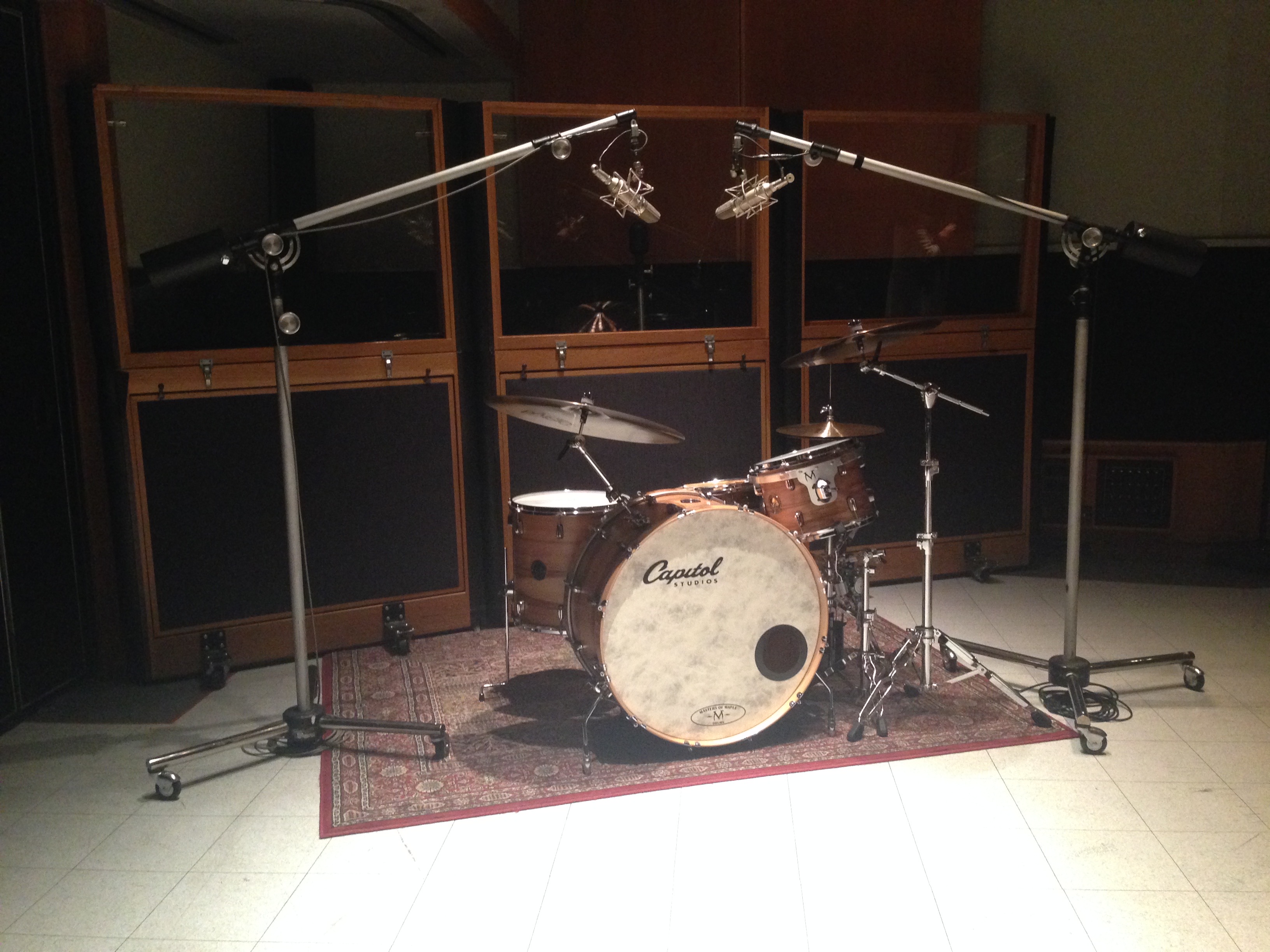 Drum kit in Studio B at Capitol Studios

Guests could “sing” into the fabled Frank Sinatra microphone, tickle the ivories of Nat “King” Cole’s Steinway, and admire the drum kit played by Ringo Starr. It was an utterly magical evening.

We know Mondays can be a drag, but it's nothing a cocktail or two can't fix.

The grousing about the decline in hospitality at craft cocktail bars has grown louder in recent years, especially with the advent of Instagram. When the subject comes up in conversation, I usually refer to this story from 2015, when I randomly stopped by Granville in Studio City after a funeral for an old college friend. The Bloody Mary itself wasn’t particularly memorable, but it was the genuine empathy from the bartender that resonated with me and exemplified what it means to be a true bartender.

This One’s On Me: Granville Cafe Studio City 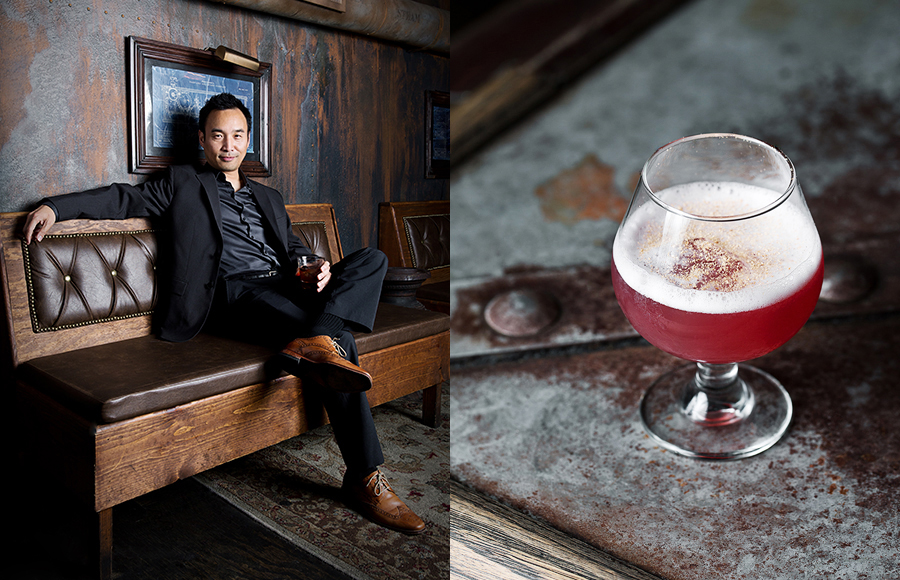 The March/April 2015 issue of Imbibe was the first time the magazine dedicated an entire issue to a single city, and I could not be more proud that the subject was my hometown, Los Angeles. There were personal firsts related to this issue – it was the first time I appeared in the print edition of Imbibe, I curated a Koreatown guide, and I was photographed by the acclaimed husband-wife duo, DYLAN + JENI. 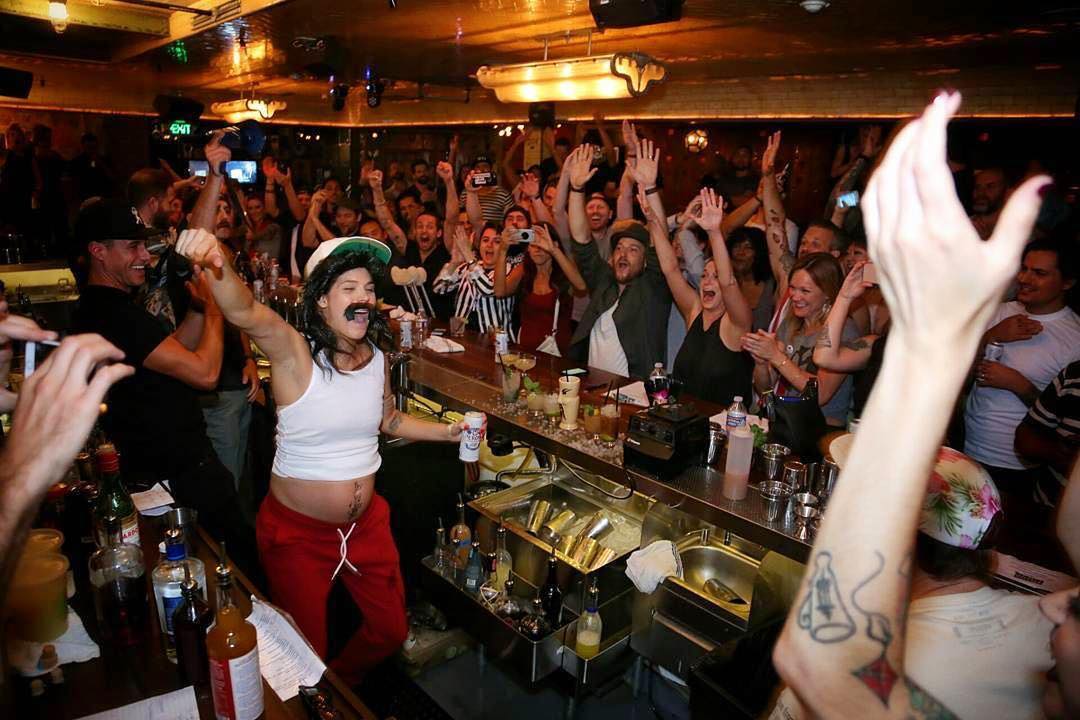 Words like “epic” and “legendary” get thrown around a lot, but that’s the only way you can describe what a very pregnant Lindsay Nader accomplished when she won Rematch Beeyatch in 2016. During the global speed competition – dubbed “Fight Club for bartenders” – bartenders make ten cocktails as fast as they can: Caipirinha, Cuba Libre, Mai Tai, Mojito, Piña Colada, Planter’s Punch, Zombie, two daiquiris, and then crack open a beer.

The West Coast regional took place at Break Room 86 – I was one of the judges at one well along with Eric Alperin and Joe Brooke. The judges at the other well were Brooke Arthur, Dan Sabo, and Devon Tarby. Competitors were disqualified if a drink was “unpresentable” – missing a garnish, low washline, etc.

Nader dressed up as a trucker, complete with “beer gut,” mullet and mustache. Not only did she throw down a blistering time that none of the other competitors could beat, at one point she had the fastest time in the world! If I live to be 100 I don’t think I’ll see another bartender competition performance like hers. The crowd went absolutely berserk when Lindsay hit the buzzer, and Eugene Lee captured the electrifying moment as only he can.