A Tale of Two Zooms 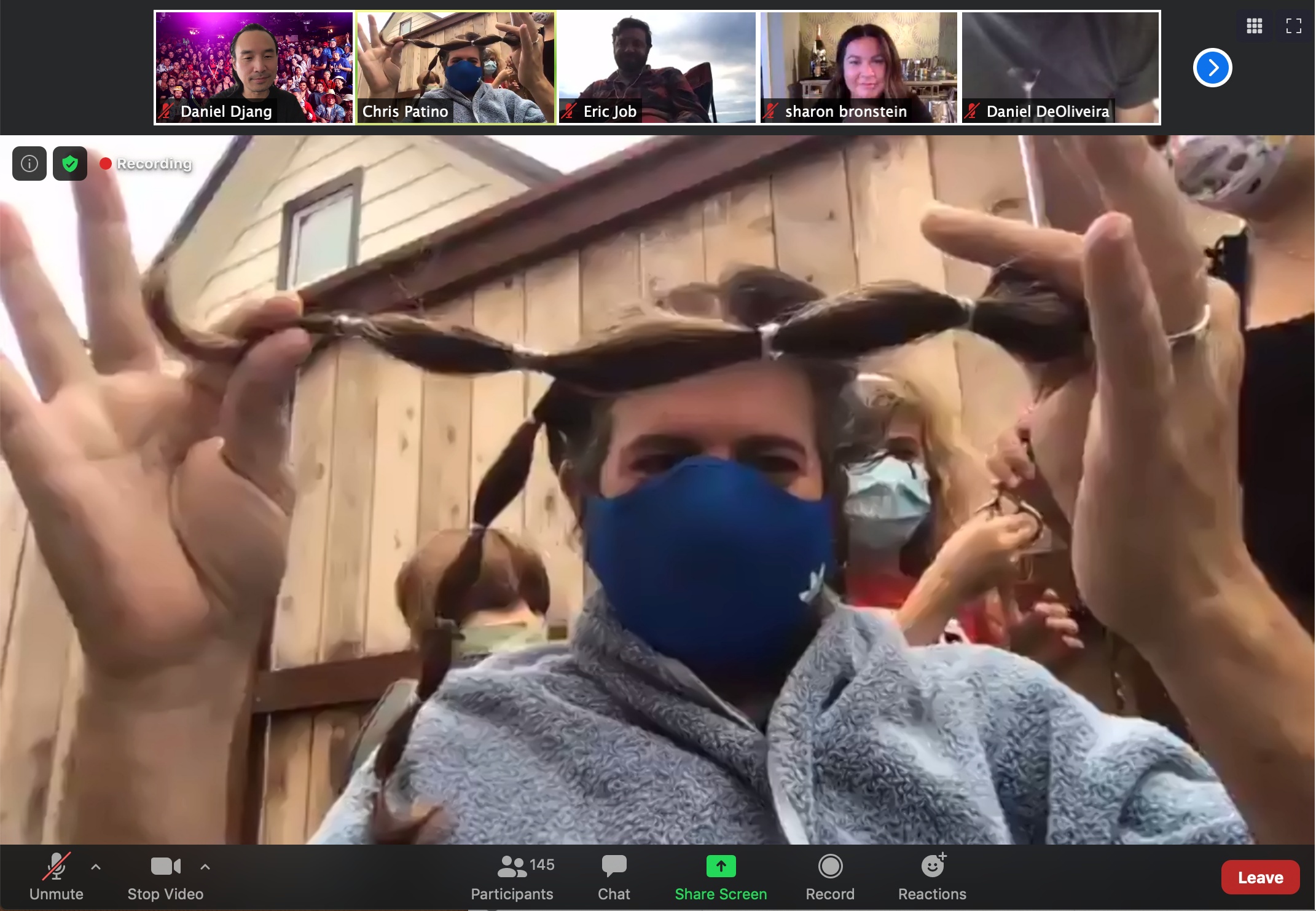 Chris Patino holds one of the ponytails he will donate to Locks of Love.

At first glance, last weekend was like so many others in the era of COVID-19 – a couple of Zooms, Netflix, Amazon Prime, lather, rinse, repeat. But the Zoom gatherings I attended weren’t the typical work meetings or casual hangouts. In fact, they underscored how important it is to stay connected with friends and loved ones in these uncertain times.

For countless people, online services like Zoom have become an integral part of our daily lives during the pandemic. Celebrating milestones like newborns, birthdays and anniversaries through a computer screen is also part of the new normal. We even have to mourn from a distance.

Zoom is often the platform of choice for bar industry seminars, trainings, virtual tastings and more. (Along with Twitch, Zoom was a key component for us to present Sipping At Home, this year’s virtual version of Art Beyond the Glass.) Of course, Zoom happy hours are a far cry from actually getting together at a bar. But with no end in sight to the coronavirus, bending a virtual elbow will have to suffice for now. 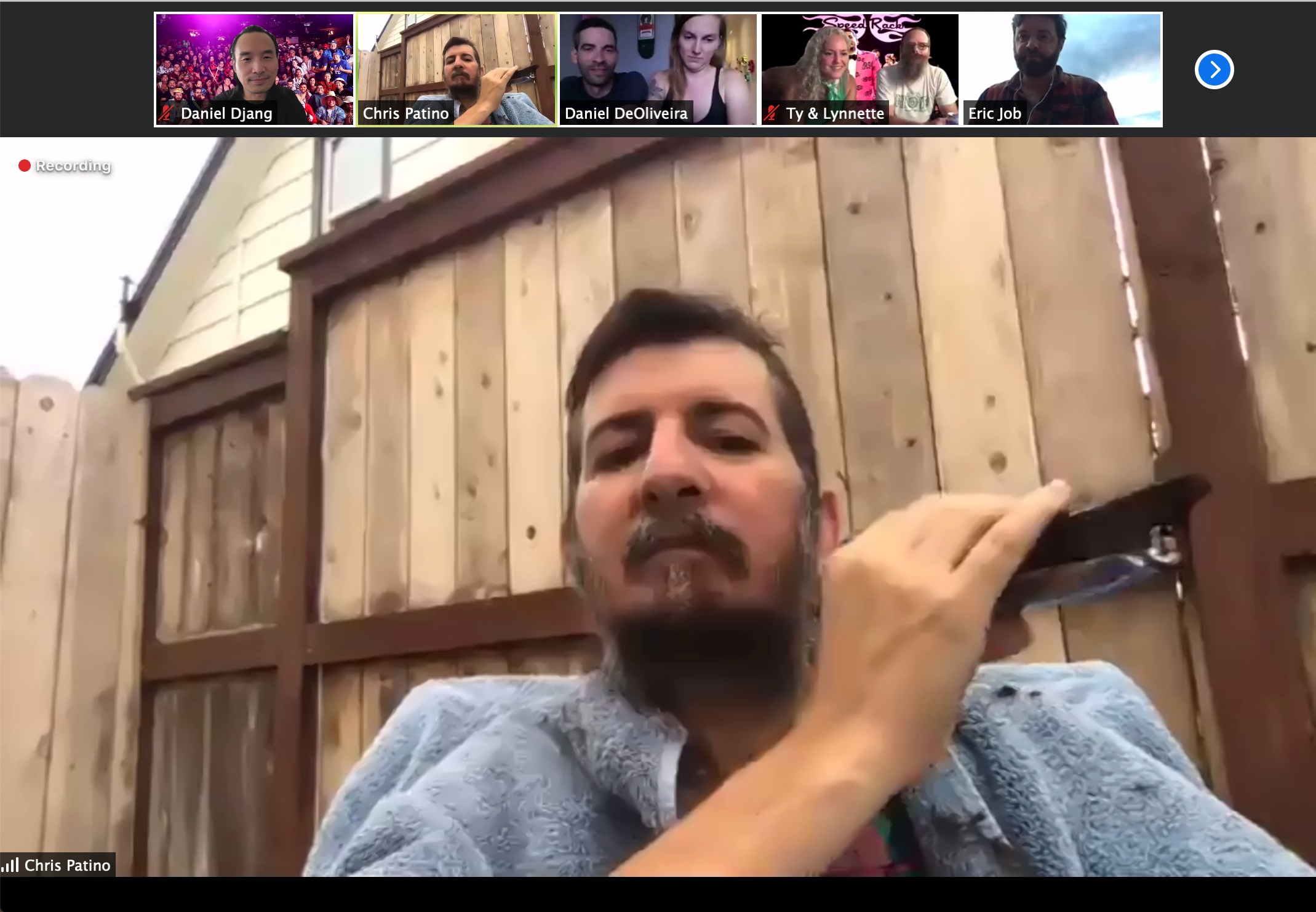 Chris Patino trims his beard after an excellent haircut from his wife Heather.

On Sunday, friends of industry icon Chris Patino logged in from around the world for Chris Cuts His Hair!, an online fundraiser for Chris as he begins his cancer treatment. During the Haircut Happy Hour, Chris’s wife Heather (who should start a side hustle as a hairdresser) and their kids gave him a stylish cut – the ponytails were donated to the nonprofit Locks of Love.

With his new ‘do, Chris joined former longhairs Daniel Warrilow and Ryan Fitzgerald, who in years past had cut their magnificent manes on stage at Speed Rack events in Los Angeles and San Francisco, respectively.

The raucous energy of the live events was missing, but the generosity of the audience was still there – in the chat, pledges of more money were accompanied by texts asking Chris to get a mohawk or soul patch.

With travel at a standstill and industry festivals like Tales of the Cocktail cancelled, it was a joy to scroll through the gallery and see so many friends – some of whom I haven’t seen in years – on the Zoom. It wasn’t exactly the Alibi at 4am, but then again it wasn’t crushingly humid in my living room, so there’s that.

Chris Cuts His Hair! raised a whopping $24,000 for the Chris Patino Hero Fund. If you have the resources, Another Round Another Rally is accepting donations to the fund ranging from $5 to $100. 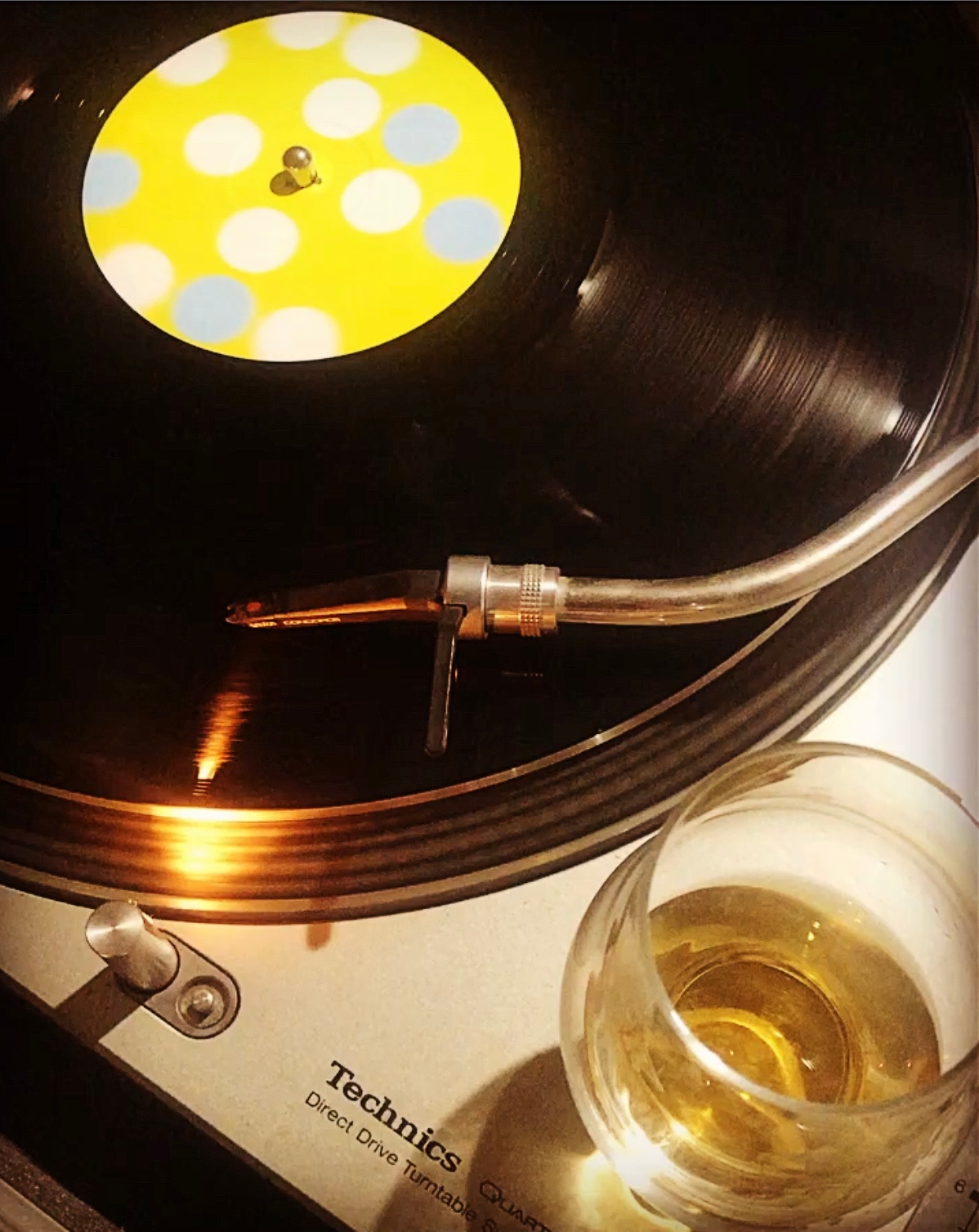 The Friday before Chris Cuts His Hair!, a memorial service was held via Zoom for John Aihara, an old friend from my DJ days who had died of complications due to the coronavirus.

John’s memorial took place a day after the nation paid tribute to civil rights icon John Lewis, who passed away on July 17. (If you haven’t seen it yet, I encourage you to watch Barack Obama’s eulogy in its entirety. It’s not only a powerful tribute to Congressman Lewis, but also a galvanizing rallying cry for the upcoming November election – Dan Rather called the eulogy “one for the ages.”)

I first met John back in college. About a decade after graduating, he invited me and a mutual friend to an afterhours party on the Westside. It was a pretty intimate gathering and John of course knew everyone – Mark Lewis was the headliner and got on the decks sometime after midnight. I had hovered on the periphery of the DJ scene to that point, but John was already deeply involved. By the time the sun came up I was all in and my life was changed forever.

I went on to become a DJ and promoter – and to bring everything full circle, I eventually played a Downtown LA event presented by John’s crew, opening for Damian Lazarus and John Wander. We would do our best to support each other’s events over the years. And whether I was looking for John from the DJ stand or in the middle of a packed dance floor, we always knew exactly where he’d be – left side speakers at the front.

The eulogies ran the same gamut as a pre-pandemic service – touching words from John’s parents, younger brother, and daughter; heartwarming and funny stories from his friends in the DJ world and beyond. The Zoom format added a layer of intimacy – with Speaker View, the eulogists were on screen front and center, at times heartbreakingly so. We may not have been able to hug each other, but the tears and laughs were as real and cathartic as if we were gathered in person.

The memorial was followed by tribute DJ sets on Twitch. I tuned in for a while, then started pulling my own records. I overserved myself with Japanese whisky and played house music late into the night. I think John would have approved.

Watching the testimonials for John, I was struck by how much they reminded me of the stories that were shared about Rocky Yeh after his untimely death at age 42 in December 2019. Like Rocky, if there was a friend in need John would drop everything and he’d be there for you, no matter where you were. John likewise could light up a room with his positive energy – it was impossible not to gravitate to him. John and Rocky lived life to the fullest, and we are all better people for having them in our lives.

During the memorial, one of the eulogists said that she will always think of John when she looks up at the stars. By coincidence, earlier that day Brain Pickings had posted a quote from The Little Prince author Antoine de Saint-Exupéry, who disappeared somewhere over the Mediterranean while flying a reconnaissance mission from Corsica on July 31, 1944 – 76 years to the day of John’s memorial.

At the end of The Little Prince, the narrator is consoled by the prince, who is about to leave Earth and return to his tiny home planet:

“In one of the stars I shall be living. In one of them I shall be laughing. And so it will be as if all the stars were laughing, when you look at the sky at night… And when your sorrow is comforted (time soothes all sorrows) you will be content to have known me. You will always be my friend. You will want to laugh with me. And you will sometimes open your window, so, for that pleasure… And your friends will be properly astonished to see you laughing as you look up at the sky!”