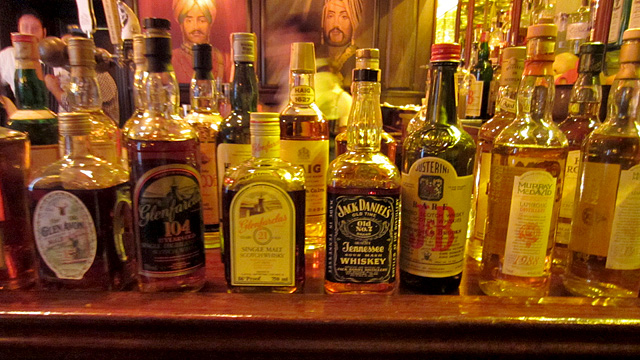 If sharing is caring, then Jared Meisler really cares about his fellow whiskey aficionados. Last month, Meisler launched the Vintage Whiskey Reserve List at The Pikey, the Sunset Boulevard gastropub that he co-owns with Sean McPherson. The list features nearly three dozen whiskies from Meisler’s personal collection, ranging from the approachable $15 for the Glen Avon 15-year to a vintage Johnnie Walker Black priced at $100. Several whiskies are from closed distilleries, which further underscores the rare and special finds in this remarkable list. 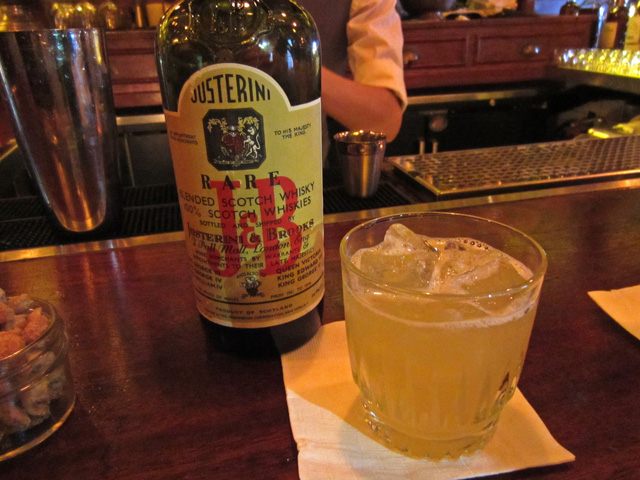 The night that the list went live, Meisler and General Manager Eric Shani hosted a dinner and paired tasting at The Pikey. Meisler pulled out all the stops for the event, which took place in the Maharaja Room. As guests entered the private space, they were greeted by the bottles of the Vintage Whiskey Reserve List, which were displayed on the bar in all their glory. You know it’s going to be a special night when bartender Zahra Bates welcomes you with a Gold Rush made with a 1941 J&B. 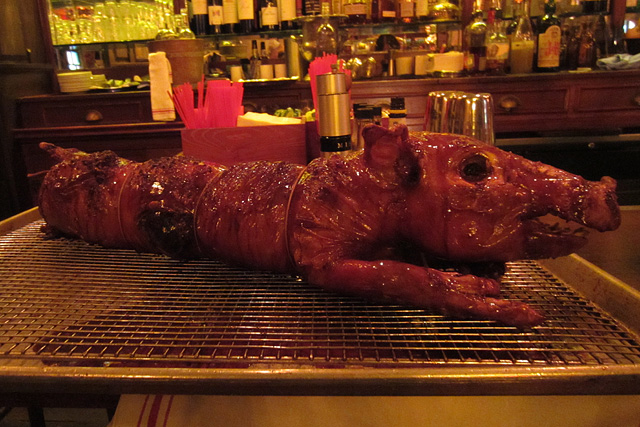 During the cocktail hour, chef Ralph Johnson whetted everyone’s appetites when he brought out the evening’s main course, the “Drunken Pig” glazed in a 1955 Canadian Club Perfect Manhattan. 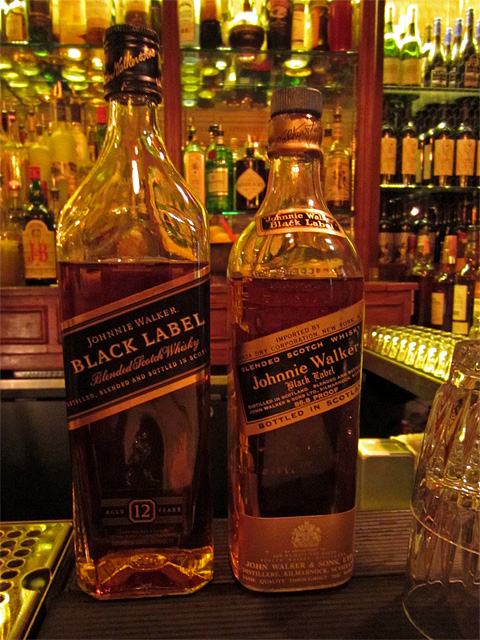 L to R: A modern bottle of Johnnie Walker Black Label and a 1954 bottle.

Meisler graciously invited everyone to sample any whiskey from the collection, including the most expensive one on the list: the 1954 Johnnie Walker Black Label, Highland, 86.8 proof ($100). Guests were able to compare a dram of the ‘54 Johnnie Walker Black with the 80-proof modern bottle, and the difference was striking – the vintage blend offered a far more velvety, rounded and smoky experience.


Throughout the evening, Meisler chatted with guests at each table, suggesting more comparisons like the vintage J&B with a current release. As with the two Johnnie Walker Blacks, there were notable differences between the J&Bs, particularly in the smoke and longer finish of the vintage bottle.
Another standout was the Old Rarity, Highland, c. 1955 (closed distillery, $45). The Old Rarity clocks in at 86.6 proof and was released by Bulloch Lade & Co Ltd, the Glasgow-based company that owned Caol Ila from 1863 to 1920. The malty blend offers a deeply rich, silky character and a hefty amount of peat.

The aforementioned Drunken Pig with black and white sausage was paired with a Perfect Manhattan made with 1955 Canadian Club and Dolin sweet and dry vermouths. Meisler credited Bates, who honed her considerable food-cocktail pairing skills as the bar manager at the Michelin-starred Providence, with the idea of serving a Perfect Manhattan with the showstopper main course. The vintage Canadian Club Perfect Manhattan, as well as the J&B Gold Rush, will be featured on The Pikey’s fall cocktail menu.

The label of the Laphroaig 1988 Murray McDavid DD Cup Bottling reads, “In the 1950s Laphroaig used to have a female manager, Bessie, who later became the owner.” The copy then condescendingly suggests that Bessie Williamson inherited the distillery because of her physical endowments – hence the “DD Cup” in the name.

In fact, Williamson was a pioneer in the male-dominated whisky world, becoming the first woman to manage a Scotch whisky distillery in the 20th century. Williamson landed a job at the Laphroaig distillery in the summer of 1932, intending to stay only a few months. She worked directly with then-owner Ian Hunter, then became the distillery’s full time manager at the start of World War II.

When Hunter died in 1954, Williamson inherited a controlling interest in the distillery. In his 2013 book Whiskey Women: The Untold Story of how Women Saved Bourbon, Scotch, and Irish Whiskey, author Fred Minnick credits Williamson for her vision in anticipating the growing single malt trend and positioning Laphroaig and other Islay whiskies in the then-emerging U.S. market.

Aged in bourbon oak casks for 15 years, the Laphroaig 1988 is a revelation, a full-bodied marriage of the signature Islay peat with bourbon’s notes of vanilla, caramelized sugar and charred oak.

Meisler called the Hickey Riggs a “ghost bottle,” a mysterious blended Scotch that didn’t show up in any of his research after he bought it. Besides having a great name straight from a 70s detective show, the Hickey Riggs delivers a gut punch with the first sip that lingers in the memory. As to its unknown origins, Chris Uhde (who curated the famed whisky wall at the Daily Pint), commented on an Instagram from the tasting: “Hope this helps. Blends are much more difficult. U.S. trademark was to Wellington Imports. They were a subsidiary of Arthur Bell & Sons. Arthur Bell & Sons owned Blair Atholl and Dufftown at the time, (and built Pittyvaich in 1974) but they could have used anything.” Mystery not quite solved, but hopefully that points Meisler in the right direction. 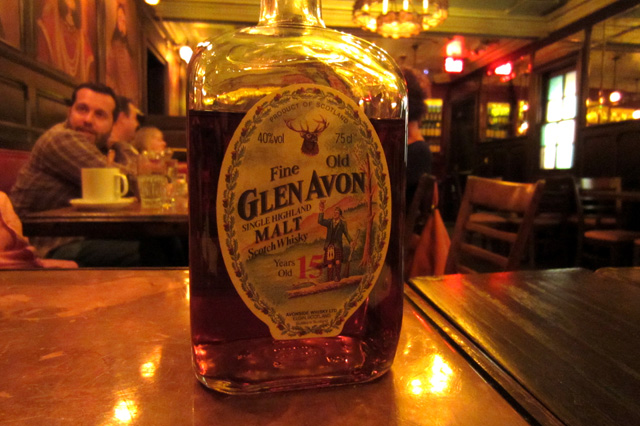 The Glen Avon 15 years old was the final dram of a stellar evening. Although the menu says “closed distillery,” in fact there was no “Glen Avon” distillery – it closed in the 1850s. The Glen Avon name is used by Gordon & MacPhail when they can’t use the actual distillery’s name. In this case the single malt was distilled in an unnamed Highland distillery.

The Vintage Whiskey Reserve List will change periodically as bottles are finished. And that’s why the collection is so captivating: once these bottles are gone, it’s very likely that you won’t see many of them again. Don’t miss your chance to take a sip of history.