From an Imbibe cover story to the recent openings of La Descarga and Caña in L.A., Smuggler’s Cove in S.F., and New York’s forthcoming Carteles and Painkiller, rum is a spirit on many a cocktail enthusiast’s mind these days. The booze fairy is feeling the rum fever as well and recently sent me a bottle of Cruzan Single Barrel Estate for review. 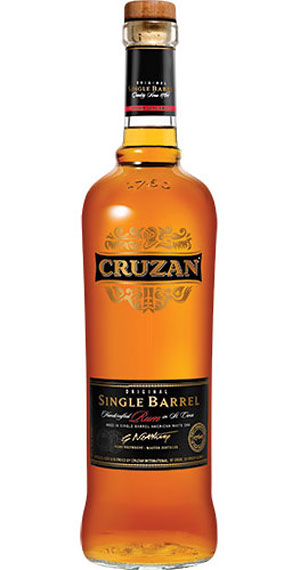 The Cruzan range of rums has been produced on the island of St. Croix in the U.S. Virgin Islands since 1760. Expressions include a light rum, several dark rums and the Single Barrel. There are also ten flavored rums infused with extracts including vanilla, coconut, mango and raspberry. For eight generations, through various changes in ownership, the distillery has been managed by the Nelthropp family. Most recently, Cruzan became part of the Beam Global portfolio in 2008. Because of rum’s important role in both the American colonies and in the new American federal union, Cruzan is one of two rum distilleries (along with Bacardi) that are part of the American Whiskey Trail.

Cruzan Single Barrel Estate Rum is aged up to twelve years in charred American oak barrels before being blended together in a single barrel for final aging, which creates the rum’s distinctive complexity and depth. Cruzan suggests sipping the Single Barrel neat, an alternative to cognac or whisky as a digestiv. The Single Barrel attained the highest ranking in the “Aged Rum” category at the Beverage Tasting Institute’s 2009 International Review of Spirits, scoring 96 points (out of 100, “Superlative”) and earning a Platinum medal. 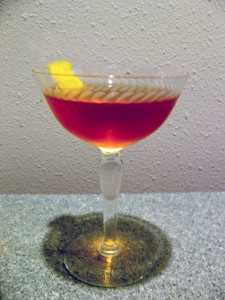 El Presidente
In his book How’s Your Drink?, Eric Felten calls the El Presidente “by far the most elegant of Cuba’s drinks” in the 1920s. He discusses the cocktail’s various origin stories, from a bartender named “Eddie” Woelke (who supposedly named the drink after Gerard Machado, the 5th president of Cuba) to Cuba’s third president, Mario García Menocal, who some claim invented the drink himself. Felten then suggests the cocktail may have originated at the Vista Alegre Club in Santiago.

Whatever its beginnings, the classic El Presidente is made with rum, dry vermouth, orange curaçao, and grenadine. While searching for a recipe to use with the Single Barrel, I came across a modified El Presidente from none other than Matt Robold, aka RumDood. His version uses aged rum instead of the traditional light rum, with much less curaçao to reduce the drink’s sweetness. I took his suggestion and added a couple dashes of bitters for even more depth. The result is a wonderful cocktail that is crisp, balanced, and delicious.