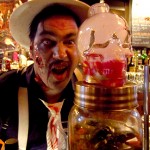 Zombies Have Taken Over 213 Nightlife! 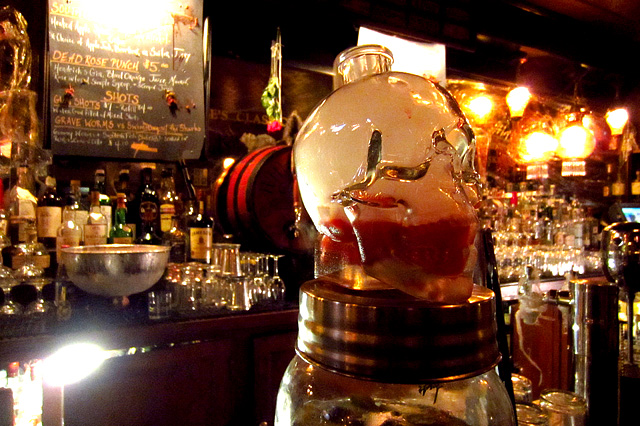 Halloween has arrived in Downtown LA, and for one lucky bar it’s going to be a bloody good time: all of the 213 Nightlife venues (except The Varnish) have been pitted against each other in a winner-takes-all Halloween contest. Each crew was given the same budget to decorate their respective bars with the theme of their choice, as long as it involves zombies. The Grand Prize is a doozy: the winning bar team is being awarded “ownership” of their bar for Saturday night (October 29th) by 213 Proprietor Cedd Moses. In other words, the victorious staff gets to keep most of the profits from their Saturday night sales! There will also be a Most Valuable Zombie (MVZ) award, with the winner getting a plane ticket to anywhere in the U.S.

Earlier this week, a panel of judges (including yours truly) was invited by 213 Operations Manager Skyler Reeves to visit the 8 competing bars and judge them on a variety of creepy criteria. In the Bar Decoration section, points were given for originality, execution of theme, “zombieness” and how well the team stretched the budget. All of the bars are serving a $5 Halloween Punch from Friday to Monday, and during the judging points were awarded for taste, presentation and other criteria. Staff were likewise judged on zombification, as well as effort. A final score was given to Overall Halloween Experience.

The judging wasn’t merely a dress rehearsal; 80% of each bar’s overall score will be determined by our judges’ cards from that night. The remaining 20% will be decided by friends of 213 on Saturday night. The winning bar will be announced on Halloween Night, October 31st. 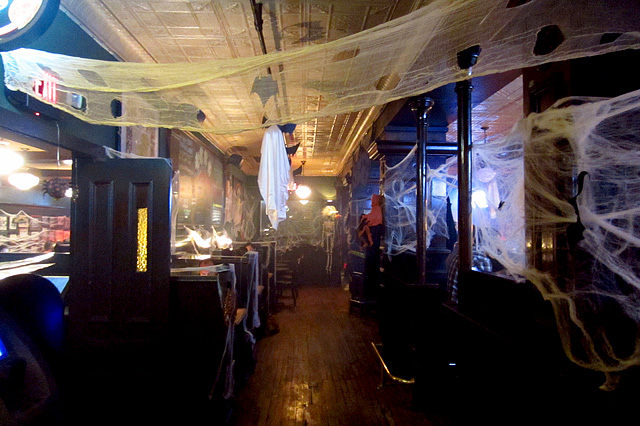 The judging began at Casey’s Irish Pub, which set the decoration bar high with a thorough transformation of the sprawling pub and event space. For Halloween, Casey’s is serving a Bloody Zombie Punch, made with Jameson Irish Whiskey, Apple Pucker and cranberry juice. Not really my cup of zombie tea, but it seemed to go over well with other judges. 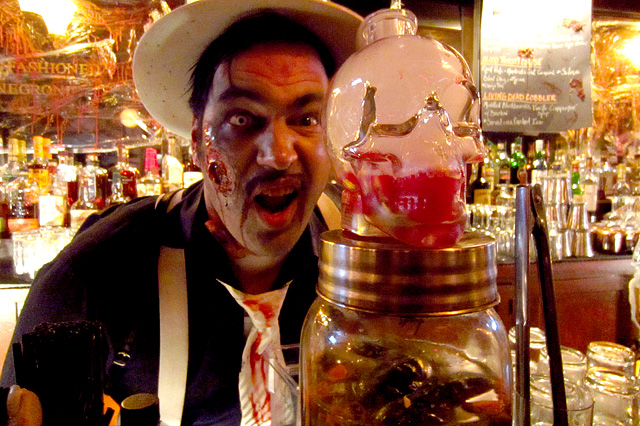 Don "Max" Maxey of Cole's should be a contender for MVZ. 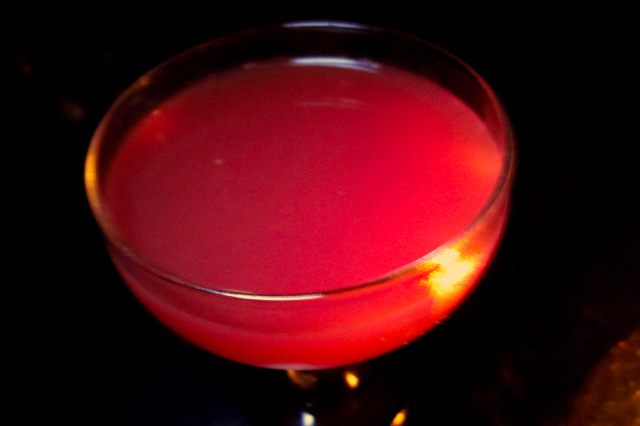 The Las Perlas bartenders get into the spirit of Día de los Muertos. 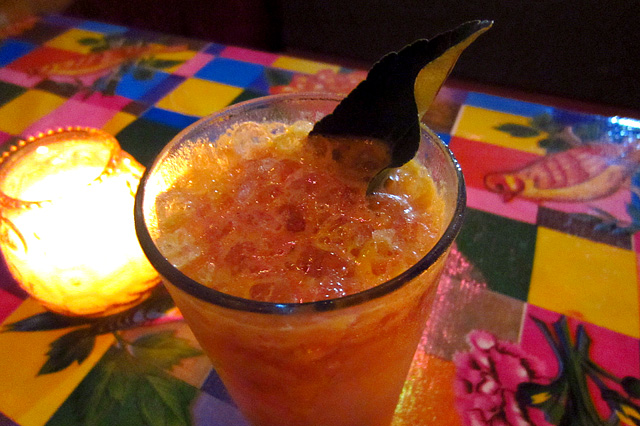 Across the street from Cole’s, Las Perlas was decked out for Día de los Muertos with altars, piñatas, and skull-faced bartenders. For Halloween, Raul Yrastorza is featuring his Jalisco Punch, made with reposado tequila, passion fruit purée, house orgeat, tamarind pulp, pomegranate syrup and coconut milk. The tall drink, served over crushed ice and garnished with a kaffir lime leaf, is delicious, though it’s not a punch or zombie-related. That said, at $5 it could be the best Halloween cocktail bargain this weekend.

Ready to operate, inside "The Kill Room" at Tony's.

With an interior swathed in blood-spattered plastic tarp, Tony’s Saloon impressed everyone with its eerie Kill Room, based on the Showtime series Dexter. Tony’s offered a punch called Etorphine Vodka Chloride, named for the tranquilizer (aka M99) that Dexter Morgan injects into his victims. The punch is made with 42 Below Kiwi Vodka, fresh strawberries, white peaches, cranberry juice, pineapple juice and Martini & Rossi sparkling wine. Though it wasn’t overrun with zombies, Tony’s followed The Code well and is going to be tough to beat in the Overall Halloween Experience category. 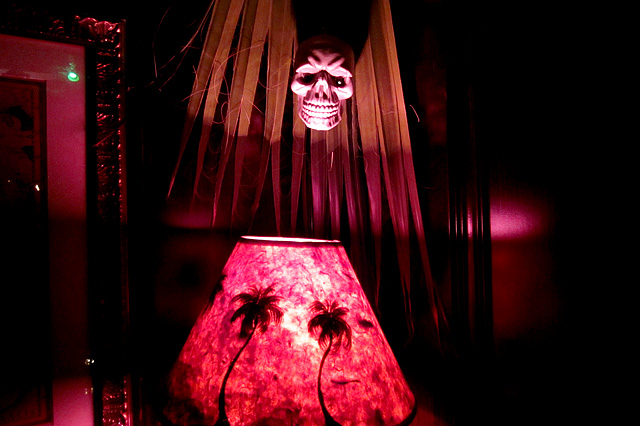 One of the many skulls at Caña. 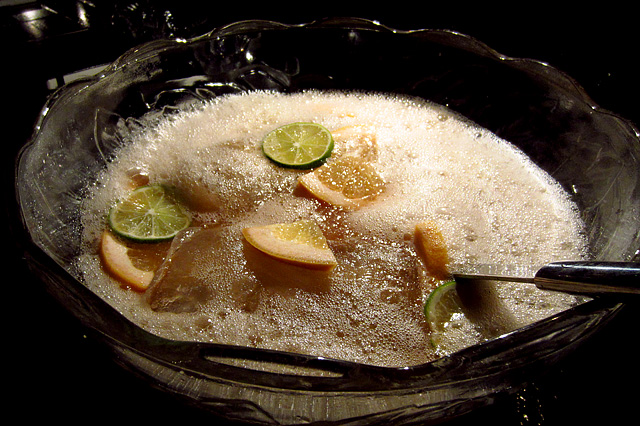 Fiending Frenzy: you can really taste the broken dreams.

Our frightful journey then took us to Caña Rum Bar, decorated with a plethora of assorted skulls, from inside the rum and cigar display cases to the patio. The Fiending Frenzy punch was superb, with ingredients described in Caña GM Allan Katz’s inimitable style: “a pagan threesome of Don Q rums, the freshest citrus on Dope Island, spices of temptation, a few drops of missionary blood, garnished with broken dreams.” The Fiending Frenzy narrowly edged the Dead Rose Punch as my favorite libation of the crawl. By the way, whoever did Danielle Crouch’s makeup didn’t get paid enough; the normally-lovely bartender looked downright scary that night. 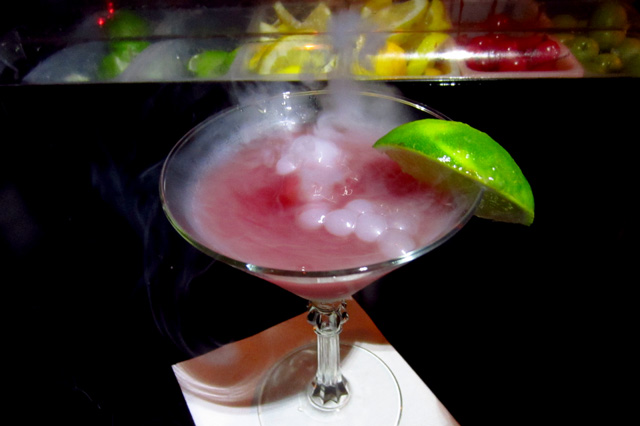 Sympathy for the Devil

The theme at Broadway Bar was undead rock stars, so it made perfect sense that it was “Jim Morrison” making us glasses of the spicy Sympathy for the Devil: tequila infused with Fresno chiles, Green Chartreuse, lemon, lime, tangerine, and “blood of the innocent” (pomegranate-blueberry syrup). The tequila continues to infuse as this post goes live, so it should really bring the heat on a chilling weekend. 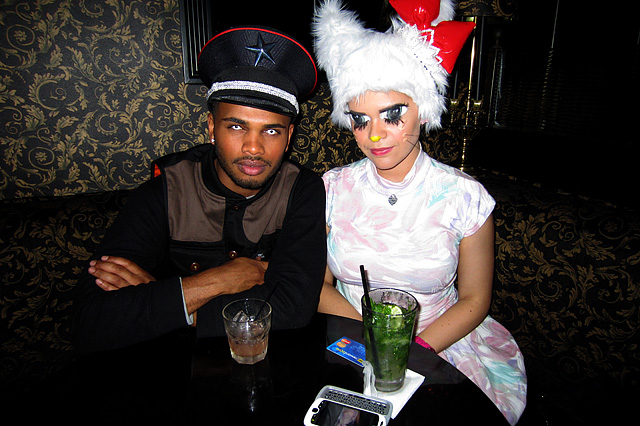 The eyes have it: our new friends Lorenzo and Star.

Our new friends Lorenzo and Star just happened to be at Broadway Bar without knowing about the zombie bar showdown that was taking place. As Star explained, “It’s Hello Kitty night!” 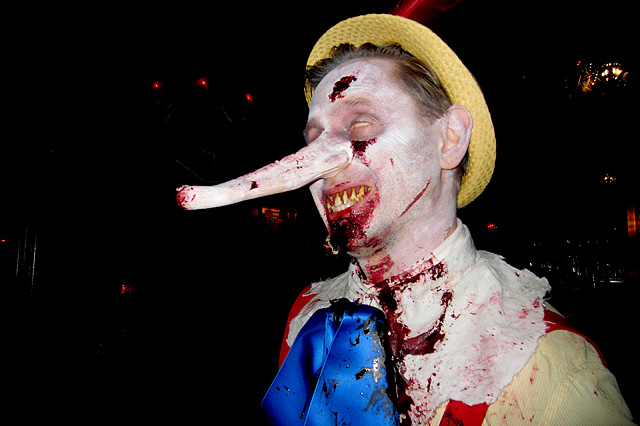 Golden Gopher shook everyone up with its Undead Disney theme, featuring scary versions of Pinocchio, Snow White and Alice in Wonderland. The ghastly zombie makeup will likely disturb your sleep for weeks to come. They definitely did something to me, because I swear I heard howling wind and a screeching cat in the men’s restroom. I even dragged Reeves and The Savory Hunter inside the bathroom to check, much to the consternation of the poor guy already in there. Of course, by the time we walked in the only thing coming from the speakers was music. I felt like William Shatner in Nightmare at 20,000 Feet. I attempted to calm my nerves with the Zombie Punch, made with Sailor Jerry Rum, raspberry liqueur, simple syrup, lemon and orange juice.

Hanging out at Seven Grand.

Our final stop was Seven Grand, where kilt-clad zombies served a knockout of an Undead Horde Punch: Jim Beam Devil’s Cut, lemon juice, orange juice, house grenadine, soda water and dry ice. The Seven Grand team must have stretched its budget to the limit to decorate the space both inside and out; from the “gunshot victim” at the entrance to the ravens and “bodies” hanging outside, no part of the venue was left untouched.

We had survived our night of the living dead bartenders, with each of the competing 213 Nightlife bars demonstrating its own strengths. I can’t wait to find out which bar wins Saturday night’s take; in the meantime, you can get in the “spirit” of the weekend and support your favorite zombie team. Many thanks to Skyler Reeves and 213 Nightlife for hosting, and best of luck to all the competitors.

This way for more pics of the 213 Nightlife Halloween competition…if you dare!