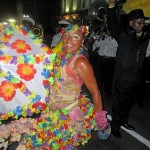 Thirsty in NOLA: Tales of the Cocktail 2012

Bartenders, spirits brands, imbibers, foodies and the sturdiest livers from around the world are heading to New Orleans this week for the 10th Annual Tales of the Cocktail. The Los Angeles crew will be in full effect at this year’s festival, from The Spare Room’s Ode to the Bowl event on Tuesday to the LA nominees in contention for the Spirited Awards on Saturday night. Between those bookend events are familiar faces such as Aidan Demarest (who is co-hosting The Big Boy Table Spirited Dinner) and Dave Stolte, who will be signing his Spirited Awards Top 10 Finalist book Home Bar Basics at the Hotel Monteleone on Thursday 11:30am-noon, Friday 1:30pm-2pm and Saturday 1:30pm-2pm. First-year Cocktail Apprentices Cari Hah (Neat) and Jaymee Mandeville (Drago Centro) will be working behind the scenes to provide support throughout the week, and Giovanni Martinez (Sadie) is doing the Green Room drinks for Spirited Awards winners and presenters.

I’ve managed to once again book more seminars and events throughout the week than one person could possibly attend. Fortunately, the stunt liver was delivered just in time and will be carefully packed in my carry on. After the jump, some selected highlights from this year’s itinerary.

Bowling at The Spare Room

WEDNESDAY, JULY 25
First up on the list of seminars is Tiki Host to the Stars, featuring Smuggler’s Cove owner Martin Cate and his look at Stephen Crane, the third man in the “historic tiki trifecta” of Don the Beachcomber and Trader Vic. Crane’s story is straight out of a movie script: a kid from Indiana rises from his humble beginnings and opens The Luau, a legendary Beverly Hills nightspot, and gets married to the incomparable Lana Turner. While Cate presents a glimpse into Crane’s world through rarely seen images and artifacts, guests will enjoy tastes of The Luau’s famous exotic cocktails.

There are tasting rooms and pool parties aplenty during Tales, but Jägermeister conveniently combines the two with its Poolside Tasting “Room,” taking place on the roof of the Hotel Monteleone. Guests can chill out with cold shots of Jäger straight from the Tap Machine, and enjoy a variety of slushies, swizzles and milkshakes created and served by an all-star team that includes Todd Richman, Willy Shine, Russell Davis, Spencer Warren, Lindsey Johnson and “The Master Stag” himself, Rocky Yeh.

Tales kicks into high gear that night with back-to-back extravaganzas, the Welcome Reception and the William Grant & Sons Party. Presented by Absolut, the Welcome Reception is a “journey of global cocktail cultures and trends” that features bartenders from five continents, with food and entertainment paired to the cocktails. The grand opening party will also feature a celebration of the Cosmopolitan with Dale DeGroff and Toby Cecchini. Then the Ambassadors of William Grant & Sons take over the New Orleans Museum of Art to wish Tales a Happy Tenth Birthday. William Grant is thoughtfully providing carriages at midnight, because after all, “it’s just Day One, people.”

THURSDAY, JULY 26
I’ve said it before, my favorite event of last year’s Tales was Nonstop to Tokyo. The sequel this year is Nonstop to Kyoto, hosted by Gardner Dunn and Neyah White:

“The whisky bars of Japan are legendary as much for their selection as they are for their hospitality. Far from the workaday highball bars of Tokyo, these temples of the dram are sedate, stylized and incredibly complete in their selections…Step out of the Quarter for an hour and into Kyoto, the sei-ichi, or soul-place, of Japan.”

Lincoln Carson (Mina Group’s corporate pastry chef) will create tastes that incorporate and pair with the selection of spirits, which include some that are “virtually unobtainable even in Japan.”

True/Untrue: Exploring Bar World Myths promises to be one of the most-talked about seminars this year. Writers Wayne Curtis and David Wondrich, along with Dave Arnold of Booker and Dax, put several commonly-held cocktail beliefs to the test. Among the questions the trio will ask: “Does that two-year-old bottle of vermouth really ruin a Martini? Does it truly make a difference if you use sour mix rather than fresh limes in your margarita?” Attendees will help bust a few myths by participating in a blind taste test.

Then it’s over to the second half of The Macallan Ice Ball Plunge, a fundraising event for the Museum of the American Cocktail (MOTAC), which is losing its lease and must find a new location by January 2013. The goal of this first-ever plunge is to raise $25,000 for MOTAC by dunking some of the top bartenders in the world into an icy pool that’s “inspired by the signature Macallan Ice Ball.” You can join a team or donate directly via Crowdrise. 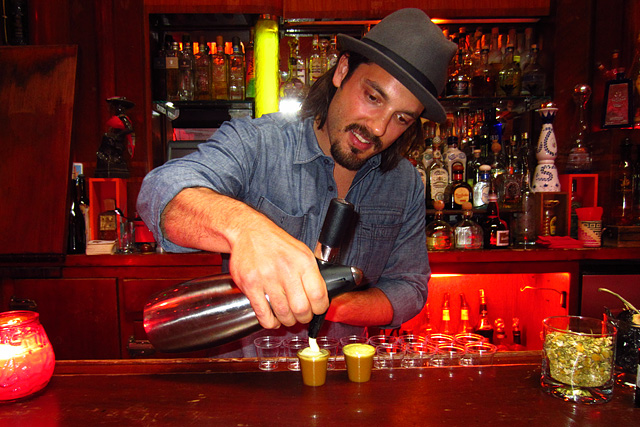 Hot on the heels of The Macallan event comes the VIVA SANGRITA!! VIVA TEQUILA OCHO!! National Finals. Regional champions from across the country will be competing for a trip to Mexico to experience the historic La Altena distillery: Rich Andreoli (Areal), Morgan Schick (Nopa, SF), Charles Joly (The Drawing Room, Chicago), Michael Parish (W South Beach), Meaghan Dorman (Raines Law Room, NY) and Chad Arnholt (Citizen Public House, Boston). Tomas Estes will be in attendance along with an all-star judges panel. A key component of the competition is the audience rankings, so guests are asked to taste all of the sangritas and vote for their favorite. The Tequila Ocho and Tecate beer will be in abundance, and the Taceaux Loceaux Taco Truck will help everyone soak up the booze.

Following a Tales tradition, Thursday night is devoted to the Spirited Dinner Series, with over two dozen restaurants hosting themed, multi-course dinner and cocktail events. As hard as it is to select just one dinner to attend, I’m opting for “A Night of Guilty Pleasures” presented by Disaronno and Tia Maria, featuring a special appearance by actor Ted Lange (“Isaac Washington” on The Love Boat) and the cuisine of Top Chef finalist Marcel Vigneron. “What’s your pleasure?” will be the question of the night, asked by bartenders from across the country, including Disaronno 2012 Mixing Star Winner Julio Cabrera (Sra. Martinez, Miami), LA’s Lindsay Nader, Joshua Pearson (Sepia, Chicago) and New York’s Willy Shine (Contemporary Cocktails INC.). Following the dinner, the guilty pleasures continue with dessert trucks and cocktails by Tobin Ellis, Giovanni Martinez, Dänny Ronen, and Elad Zvi and Gabe Orta of Bar Lab.

The official afterparty for Thursday’s Spirited Dinners is taking place at One Eyed Jacks, featuring Employees Only, the 2011 Spirited Award winner for World’s Best Cocktail Bar. For this pop-up version of the acclaimed bar, the boys-only bar team of Employees Only will be joined by “some of the best girl bartenders in the country” for a night of bespoke cocktails, gourmet hors d’oeuvres, live music, burlesque and “other unspeakable delights.” 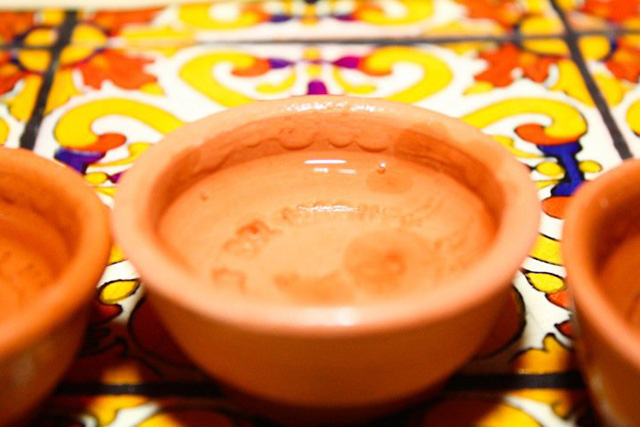 FRIDAY, JULY 27
Throughout the week, media and Tales presenters are invited to events at the Reincarnation Room, located on the 17th floor of the Hotel Monteleone. Several of the breakfasts and luncheons look enticing, but the Distillerie Branca Breakfast Italian Style is well-timed; looking at Thursday’s schedule, the Reincarnation Room had better live up to its name. Hosted by Count Niccoló Branca himself, this breakfast features Fernet-Branca and Coffee, Hair of the Dog, the Eva Peron and a Fernet Milkshake.

The Spirit of Spirits seminar will explore everything from religious rituals at the world’s oldest excavated temple to monk-made liquors, and discuss the sacred origins of spirits and hospitality with industry experts and Rev. William R. Daily, C.S.C.. Panelists include Derek Brown, Ron Cooper, Martin C. Duffy, Tim Master and Eric Seed, with featured spirits from Bénédictine, Chartreuse, Del Maguey and Haus Alpenz.

This excerpt from the event listing for The Art of Spirits Blending says it all: “For the first time ever, two master blenders from opposite sides of the world reveal the art and science of the spirits world’s most secretive craft: blending.” The sold-out seminar will be moderated by Philip Duff and brings together Jean Sébastien Robicquet (founder and Master Distiller of EWG Spirits & Wine) and Carlos Camarena, the renowned tequila distiller and blender, and producer of the award-winning Tapatio, El Tesoro and Excellia tequilas. The best part: “Attendees will be able to blend their own tequila from Carlos’ cellars, using techniques and distillates supervised by Jean-Sebastien.”

Roger Room in action at the 2011 Bar Room Brawl.

With the Mississippi River as the dividing line, BarSmarts graduates from the West and East will face off in the Battle of the BarSmarters, a “heroic battle of wits, skill and nerve” taking place at the House of Blues. But that’s only the preamble for the Bar Room Brawl, featuring teams from around the country recreating their respective bars and serving original cocktails using 10 Cane Rum, Belvedere Vodka, Grand Marnier and Hennessy. Last year, judges crowned Boston’s Eastern Standard Kitchen & Drinks as the Bar Room Brawl Champions of the World. Attendees voted for the People’s Choice Award, which resulted in a three-way tie that included LA’s Roger Room, which followed The Varnish being named the People’s Champion in 2010. Los Angeles won’t have a chance at a threepeat at this year’s competition; the West Coast baton has been passed to San Francisco’s Beretta, which will go up against Seattle’s Rob Roy, Kansas City’s Manifesto, New York’s Employees Only, Houston’s Anvil Bar & Refuge, and The Passenger/Columbia Room of Washington D.C.

SATURDAY, JULY 28
The Bon Vivants (Scott Baird, Josh Harris, Alex Straus) will once again take over Washington Square Park with the 3rd Annual Pig & Punch, an epic afternoon of food, drink and good times for a great cause. The Bon Vivants ask that guests “bring your empty belly, your smiles, and 30 bucks for your t-shirt for charity.” All funds raised through sales of the Pig & Punch shirt will be donated to the New Orleans KIPP Charter Schools, where a group of bartenders volunteered their time earlier in the week. The inaugural edition had 11 volunteers and raised over $1600 for the charity. Last year, there were 42 volunteers and over $6000 was donated. This year promises to be the biggest Pig & Punch yet: nine pigs, six trash cans of punch, lawn games, music, a few surprises, and if all goes well a fundraising total that leaves previous years in the dust. Not to be missed!

Then it’s time to close out this year’s Tales with Juniperlooza, a “festival of gin, music and dance.” Simon Ford and Audrey Saunders started the event six years ago as the Bartenders Breakfast, an homage to the bartender way of life. Now it’s known as the “official unofficial wrap party” for Tales, featuring a host of bartenders, punch bowls, food trucks and the music of Aloe Blacc, The Crooners and DJ Nick van Tiel. 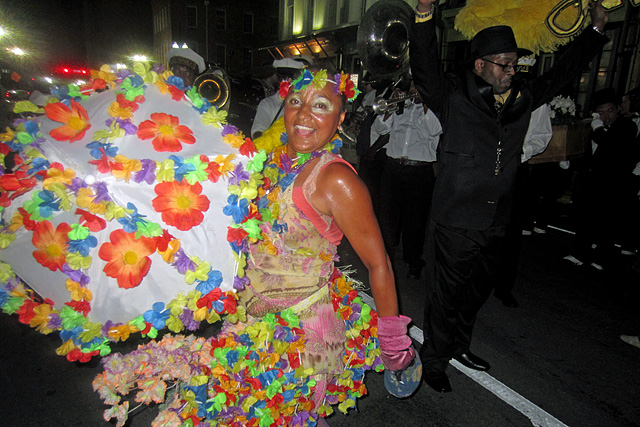 One thing Tales veterans and newbies alike can count on: you can plan your events and seminars down to the minute, but inevitably someone you may or may not know will kidnap you and you’ll find yourself…somewhere that wasn’t on your agenda. It’s the unplanned and the unexpected that makes Tales of the Cocktail (and New Orleans itself) so much fun. The preceding highlights, while a fairly accurate summary of where I’m supposed to be this week, are merely the beginning.

For the latest from Tales, you can check the Twitter feed on this page or follow @ThirstyInLA and the hashtag #thirstyinnola.

See you on the other side!