Hello all you LCL fanatics,

Many of you have heard this already and if so apologies for the repeat. But we are trying to rally the masses to help out my brother Charles Munat. Charles holds unofficial title of LCL Godfather (see the Acknowledgments section of your copy of LCL for more details on his role in its creation). Charles is also a website designer and Web Master for Tales Of The Cocktail.

Unfortunately, Charles was recently the victim of a professional robbery in broad daylight on the streets of Buenos Aires. The thieves made off with his laptop and all his drives, leaving him without a means to make his living.

So we are asking that people help Charles out in getting his life back. You can help by attending the event that’s been formed on facebook, by sharing this event with others, and by buying Charles a few drinks via paypal donation (Charles promises to not actually spend this money on drinks but instead on a new computer).

With a little generosity from our friends and family, Charles hopefully will soon be able to earn a living again and we willl have a Tales Of The Cocktail website after all!

Thanks so much from all of us in the Munat family for your help! 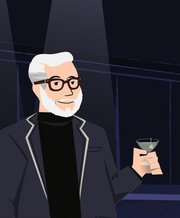 As Ted wrote in the LCL Acknowledgments, “Without Charles, there would be no Left Coast Libations.” And as of this writing, apparently no website for Tales of the Cocktail. Like many of you, I would instinctively offer to buy Charles a drink or three if I saw him, so why not use those funds to help Charles get back on his feet? (Of course, if Charles did buy himself a couple of rounds I wouldn’t object.)

For more information on Charles Munat, the Buenos Aires incident, and how you can help a fellow cocktailian and traveler, visit www.munatbros.com.