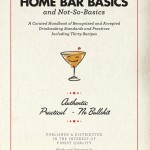 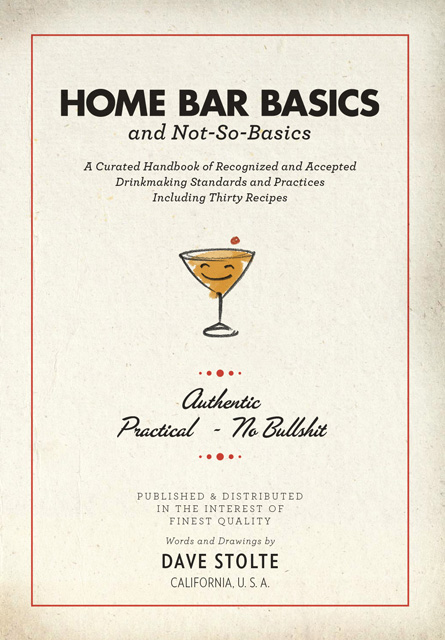 On Sunday, September 29, Dave Stolte is guest bartending at Goldie’s for the Home Bar Basics 2nd Edition Launch Party. The event – sponsored by Olmeca Altos Tequila – is a celebration of the new and improved version of Home Bar Basics (and Not-So-Basics), the Spirited Award-nominated cocktail book that Stolte wrote, designed and illustrated. The first edition of the book was crowdfunded on Kickstarter and sold out its initial run of 1,500 copies in November 2012 after one year of availability.

Jim Meehan and Dave Stolte sign their books for each other at The Spare Room in 2012.

“The experience of raising the initial funding via Kickstarter was overwhelming and humbling – to see so much support for the idea of the book before it even existed from strangers around the world,” said Stolte. “Having it nominated for a Spirited Award as Best New Cocktail Book alongside the PDT book, Bard Thomas Parsons’ Bitters, books from gaz regan and Imbibe…was completely surreal.” 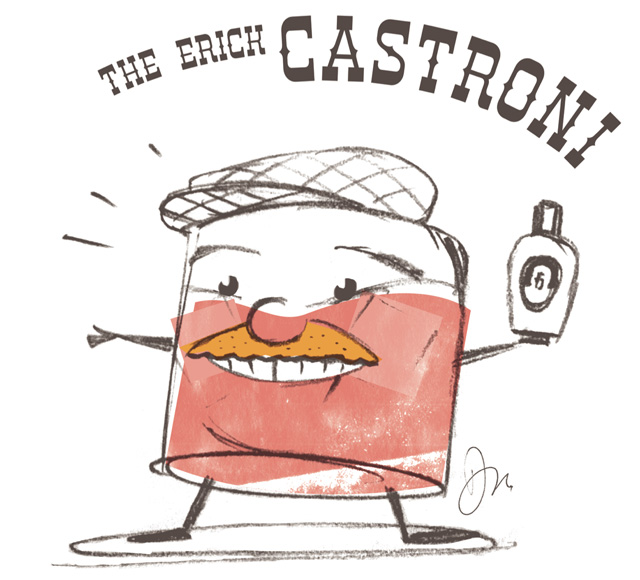 Even before the first edition of his book was published, Stolte was a constant presence at top bars and cocktail events in Southern California and across the country. After the book was funded, printed and went on sale, he continued to support the LA cocktail community – not only by bending an elbow at his favorite bars, but also by providing superb pro bono design work, from the Art Beyond the Glass and LA Hearts NY logos to the Lil’ Twisted Sangrita Tour e-flyers. For this year’s Manhattan Cocktail Classic, English Gins brand ambassador Trevor Easter asked Stolte to create the wonderful Erick Castroni illustration. Pernod Ricard subsequently commissioned Stolte to create cocktail caricatures of dozens of bartenders for Juniperlooza at Tales of the Cocktail – you can see some of these illustrations in the Facebook profile photos of Easter, Lindsay Nader, Erick Castro, Lynette Marrero and Chris Patino. Stolte is now offering to create custom cocktail illustrations, which will make an excellent gift for that boozy art lover – or artsy booze lover – in your life.

Between editions, Stolte continued to revise what he now calls the “beta version” of the book. During that time, he learned many lessons – “too many to list” – and he’s still learning, even as he educates others. “One thing that surprised me was the global love for the Negroni – something I thought was just a darling of cocktail nerds,” said Stolte. “As a result, I added the Negroni as one of the 12 Basic Drinks and demoted the pain-in-the-ass Mojito to the back of the book.”

Those who were lucky enough to snag one of the first editions of Home Bar Basics should know that the second edition is packed with updates and improvements. “First off, I fixed all the fuck-ups I caught after the book was printed, like telling people to put a quarter-ounce of nutmeg in their Egg Nog. I may be responsible for a round of hallucinations around the world thanks to that one,” said Stolte. “I also added five new recipes, shuffled some content around, added a section on hospitality at home, and refined at least half of the recipes after extensive testing. All the color illustrations received an overhaul, and a handful of the black and white illustrations were revised.” Stolte also added a metric conversion chart and a drinks-per-hour safety chart.

In a process that he describes as “a testament to stubbornness,” Stolte self-financed the second edition of Home Bar Basics. “Many suggested I go back to Kickstarter or IndieGoGo to raise money for the second book, but that approach just didn’t feel right to me. So I squirreled away every dollar I could until I had enough to pay for the second printing of 4,000 and had them ready just in time for Tales of the Cocktail. It was a pretty significant personal investment, but obviously, I believe in the book. It’s available at 14 specialty shops around the country now, and I’m hoping to get the interest of an appropriate national retailer with this edition and grow again.”

The second edition has garnered accolades from a number of luminaries. “It’s a thrill to catch some attention and praise from people in this industry I have so much respect for – the staff at Imbibe, Ian Cameron at diffordsguide, Jared Brown, Todd Richman, Beachbum Berry, Simon Majumdar, Alie & Georgia… they’ve all had some kind words about the new edition.”

Stolte has been doing informal promotional events since the book launched in July – signings at Tales and at 320 Main in Seal Beach, teaching cocktail classes at The Four Seasons Beverly Hills and at Raven & Rose in Portland with David Shenaut. In addition to the upcoming Goldie’s event, Stolte recently did a guest bartender gig at Polite Provisions with Beefeater and Plymouth. “Coming up…who knows? I’m game for almost anything. I’ll probably be attending Portland Cocktail Week, maybe I can stir up some trouble there. I have my eye on Paris of the Plains next year, as well. My family’s from KCK and St. Louis, so it’d be great to check out the cocktail scene there.”

Stolte has also been doing more work for bars, restaurants and brands through his boutique design studio, Wexler of California. “I’m working now on a complete branding for a restaurant and bar project in Rolling Hills-Torrance with Joan McCraw and Ricki Kline that’s very exciting.” He’s continuing his design and marketing work with Clover, the bar and restaurant in Spokane where Paul Harrington is a partner. “I’m also getting ready to reveal the re-branded and highly-illustrated labels I did for Jake Lustig‘s line of Don Amado mezcals – which will also see a boost in proof – and also the label for a new product that fans of Fernet Vallet will be sure to love.”

Stolte is also a partner in Barley Forge Brewing Company – he’s the Design Director, responsible for labels, social media, and more. “We’re in the midst of our buildout in a soon-to-be-revealed location and hoping to be open in time for Christmas,” said Stolte. “This is a project that’s been ten years in the making, from Greg Nylen‘s pilot brewery in his Topanga basement to a full-scale production brewery with a tasting room. We’re excited to share his beers with the world…very soon!” 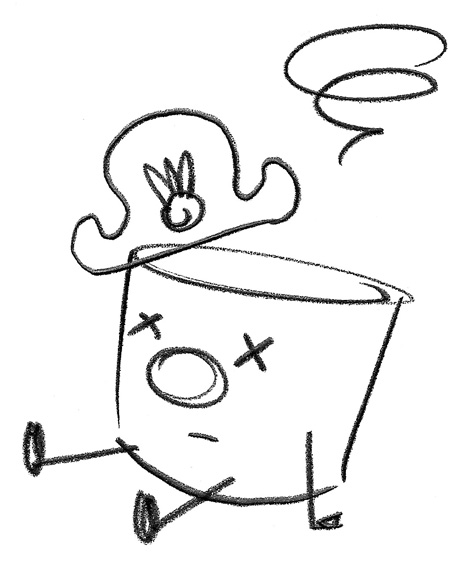