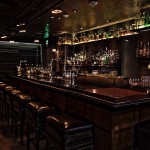 Cocktail Bar at Honeycut | Photo courtesy of Honeycut, via Facebook

“Through its annual Spirited Awards®, Tales of the Cocktail® recognizes those that continue to represent the cocktail industry in exciting new spotlights. To embody the ideals in which Tales of the Cocktail® was originally founded, these awards were developed to recognize both national and international honorees across twenty-three categories. Each award recipient will receive an exclusive Riedel Crystal trophy.”

This year, the judging committees were greatly expanded – the American and International teams totaled 140 judges. The American judging committee was chaired by Simon Ford; Jacob Briars oversaw the selection of all International judges; and Dave Wondrich – the James Beard Award-winning writer and five-time Spirited Awards winner – lead the judging team dedicated to the writing awards.

“Today there is so much talent in our industry, and judging these awards is only getting tougher and tougher, which is why we have made these changes. It is important to us that these awards are run with credibility and integrity for both past and future winners,” said Ford.

The winners will be announced on July 19 at the 2014 Spirited Awards ceremony in New Orleans, featuring a theme inspired by Truman Capote’s legendary 1966 Black and White Ball. For more information and to purchase tickets, visit www.talesofthecocktail.com.

After the jump, a complete list of the Top Four nominees according to category.