Blame it on Rio: Leblon and the Caipirinha

In the next several years, the eyes of the world will be on Brazil, the host country of the 2014 FIFA World Cup and the 2016 Summer Olympics. The booze fairy wanted me to get a head start on getting to know Brazil and thoughtfully sent a review package of Leblon Cachaça. Cachaça (pronounced “ka-SHA-sa”) is a Brazilian spirit distilled from sugar cane juice. It’s the world’s third most consumed spirit, after vodka and soju/shochu (No. 1 and 2, respectively). Historians date the initial creation of cachaça between 1532 and 1550 in Brazil. Unlike rum, which is usually made from molasses, cachaça can only be made from fresh cane juice, and can only be made in Brazil. Thirsty Brazilians drink over 1.3 billion liters of cachaça a year, representing 99% of the world’s total cachaça consumption.

Named after an affluent neighborhood in Rio de Janeiro, just west of Ipanema, Maison Leblon was launched in 2005 by founder Steve Luttmann, a 20-year veteran of the food and beverage industry. The Leblon distillery is located in the agriculturally-rich region of Patos de Minas, in the state of Minas Gerais in southeast Brazil. The small batch, single distillation of the pressed sugar cane is triple-filtered according to proprietary French Cognac techniques and lightly rested in Cognac casks for up to six months. The result is a nicely balanced, smooth cachaça with a distinct, fruity-floral profile. Leblon Cachaça has been critically acclaimed, earning “Best of Class” at the UK Rum Experience International Tasting Competition and multiple Gold Medals at the San Francisco World Spirits Competition, including “Best Cachaça” and a Double Gold Medal” this year. In addition to the Caipirinha (see below), Leblon can provide a Brazilian twist to classics such as the Mojito or the Margarita. 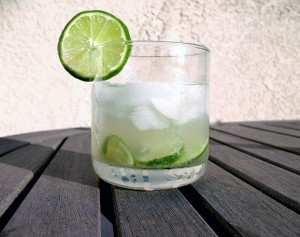 The Caipirinha
Brazil’s national cocktail is a refreshing drink made with cachaça, sugar and lime. Previously unknown outside Brazil, the Caipirinha has seen its popularity grow along with the availability of high-end cachaças. The Caipirinha has been garnering praise from mixologists across the country: Erick Castro (Rickhouse, SF) says the Caipirinha “opens (customers) eyes to a new universe of possibilities,” while Tad Carducci (Tippling Bros.) says the Cairpirinha “couldn’t be simpler or more perfect,” and “instantly tranports the drinker to the beaches of Brazil.”

On a summery spring day like we have today, the Cairpirinha is the perfect cocktail to enjoy alfresco. From the classic recipe, endless variations can be mixed using pineapple, kiwi, raspberry, or cucumber. Saude!