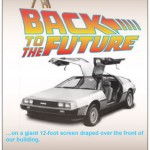 May 23: Walk-In Theatre Night Under the Stars at Big Bar

“If you put your mind to it, you can accomplish anything.” ~ Marty McFly

Memorial Weekend is right around the corner (seriously, how fast is this year going by?), and with it comes the start of the summer blockbuster movie season. To get you warmed up, Big Bar is hosting its first ever Drive-In Walk-In Theatre Night Under the Stars, featuring the top grossing movie of 1985: Back to the Future.

Like its Oscar Party earlier this year, Big Bar will be showing Back to the Future on a 12-foot screen that’s draped over the front of the Big Bar – Alcove Cafe building, while guests watch from the garden patio. The movie starts at 8pm, but arrive early to get started on Big Bar’s new Spring Cocktail Menu, which features over a dozen drinks. Tops on my “to-sip” list is the Bo Diddley, made with Rittenhouse Rye, King’s Ginger Liqueur, honey, lime, Angostura bitters and cucumber. (Hmm, wonder if we can call it the “Chuck Berry” for movie night?) And it’s always nice to see the Holland Razor Blade, Eric Alperin’s modern take on Charles H. Baker’s “rugged bit of canine fur”: Bols Genever, lemon, simple syrup and cayenne pepper.

Back to the Future on the patio, Zaya and Fernet cocktail specials, and a costume contest: you don’t want to miss this party, otherwise Darth Vader from planet Vulcan will melt your brain!

Walk-In Theatre Night Under the Stars
Monday, May 23, 2011
8pm to 12am
Free admission
Featuring: