Learning About a Revolutionary Spirit at Caña Rum Society 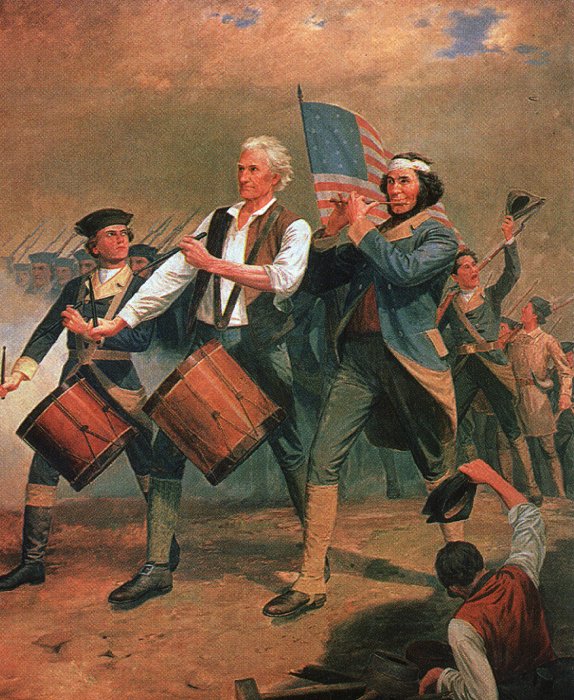 Ahh, the Fourth of July: barbecues, fireworks and…rum? Good ol’ whiskey is probably the American spirit that first comes to mind for many people on this most patriotic of holidays, but rum has a long and important role in American history, dating back to colonial times. In fact, as Matt Robold (RumDood) explained at the latest gathering of the Caña Rum Society, rum “has more history in America than any other spirit.” Last week’s Rum Society meeting (dubbed “R.U.M. in the U.S.A.”) was one of the most interesting editions to date. The American rums we tasted were top notch, representatives from two of the distilleries were in attendance to talk about their releases, and Ministry of Rum founder Ed Hamilton (who is importing the legendary Lemon Hart 151 back into the U.S.) was in the house as well. 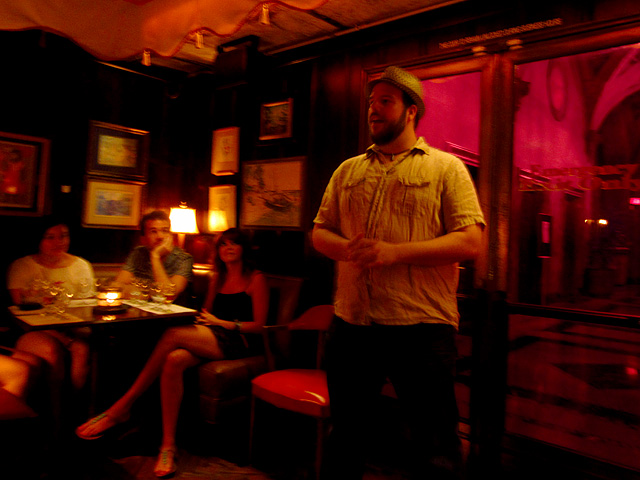 RumDood gives a quick lesson on the history of rum in America.

Before starting the tasting proper, Robold gave a crash course on rum’s integral role in the colonial economy. As he notes in Rum 101: Rum in the USA, “rum had seeped into just about every facet of American life” by the time the War of Independence broke out. The colonists’ thirst for rum was prodigious; according to Tom Standage (A History of the World in 6 Glasses), “rum was being consumed at the rate of nearly four American gallons per year for every man, woman, and child in the colonies.” Author Wayne Curtis (…and a Bottle of Rum) said in a 2006 interview with NPR that “at one point there may have been as many as 160 rum distilleries in New England.” Even as rum was being consumed in the colonies it was also used as a currency to purchase slaves in West Africa; this trade model of rum, sugar and slaves has been called the Atlantic triangular trade.

To make rum, New England distillers used molasses imported from French sugar islands. This didn’t sit well with the British, who passed the Molasses Act of 1733 to levy heavy taxes on French molasses and thereby “encourage” the American colonists to buy inferior British molasses. The colonists defied the British law and distillers continued to produce rum with smuggled French molasses. Subsequent unpopular laws were passed, such as the Sugar Act of 1764 and the Tea Act of 1773; the latter would result in the Boston Tea Party and eventually lead to the outbreak of the Revolutionary War in 1775. Rum would fuel American soldiers throughout the war with Britain, but after the American victory rum would eventually be eclipsed by whiskey as settlers headed west.

Americans may collectively think of tea as a key inspiration for the fight for independence, but thanks to rum, the spirit of revolution was fomented decades earlier with the British taxation of molasses. Standage notes that years after the British surrender, John Adams wrote to a friend: “I know not why we should blush to confess that molasses was an essential ingredient in American independence. Many great events have proceeded from much smaller causes.” 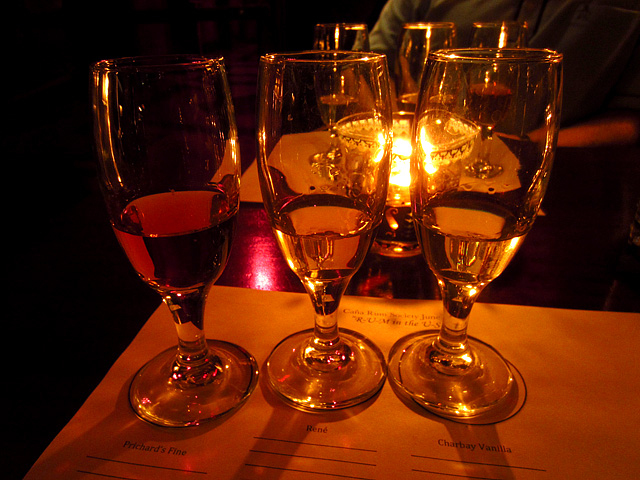 The first rum that we tasted was Prichard’s Fine Aged Rum, from Kelso, Tennessee. Robold noted that when Phil Prichard launched his namesake distillery in 1999, it was the first new distillery in Tennessee in fifty years. The Prichard’s website describes its 80-proof Fine Rum as “an accurate recreation of the ancient rum of an older time.” The Fine Rum is distilled from premium table grade molasses and Tennessee spring water in copper pot stills. The rum is aged 3-5 years in hand-made, 15 gallon charred white oak casks. Robold commented that Prichard operates somewhat by the seat of his pants, a description that Christopher Uhde of JVS Imports supported when he said that the Fine Rum is a blend of various rums that average to “around 80 proof.”

As always, Robold encouraged Rum Society members to share their impressions throughout the tasting. On the nose, the Fine Rum offers bananas, orange peel, floral notes, brown sugar and oak. The grassy, vegetal palate has notes of leather, licorice, white pepper and raisins. Robold compared the Prichard’s Fine Rum to a heavy, funky Jamaican rum and suggests enjoying it as a sipper, paired with a cigar, and in variations of an Old Fashioned or a Sazerac.

Next was the René Alambic Rum from Solomon Tournor Distillery in Mendocino, California. Robold introduced Master Distiller Chris Solomon, who gave us a brief overview of the rum before we tasted it. The René is made from sugar cane molasses, double distilled to 80 proof from an alambic pot still. The distillate is reduced with filtered rain water, which adds a softer, sweeter reduction. The rum ages in 90 gallon cognac barrels for a year and a half. The taste is pure, without too much oak. With no added sugars or caramels, Solomon said the René Alambic Rum has a “true taste” that represents pure sugar cane product. At Rum Society we were tasting the 2007 expression. Solomon suggested that we cleanse our palates, then sip the René a few times in order to fully appreciate it. On the nose we got notes of butterscotch, a profile of grass or hay. The smooth, velvety palate brings notes of violets and olives,while the finish is warm and long.

Our final rum was the Tahitian Vanilla Bean Rum from Charbay Winery and Distillery in Napa Valley, California. “The Still on the Hill” is located on Spring Mountain above St. Helena, where Miles and Susan Karakasevic began distilling Alambic Pot Still Brandy in 1983 and never looked back. Their son Marko is a 13th generation distiller, and with his wife Jenni carries on the family’s artisan distilling tradition. For this release, Miles spent a year on research before deciding on rare, whole Tahitian vanilla beans. The beans were extracted for three months, then blended into Charbay Cane Rum, sourced by Miles and Marko from fresh Hawaiian sugar cane honey and distilled in the Alambic Charentais pot still. The blend is lightly filtered to impart the natural flavors and fragrance of the rum and vanilla. The nose offers strong notes of vanilla and caramel, while the first sip immediately brings Nilla Wafers to mind. Charbay suggests pouring the 70-proof Tahitian Vanilla Bean Rum over ice. Robold recommends some acid to cut the sweetness, making it a good candidate for Tiki drinks, or perhaps poured over ice cream or pancakes. 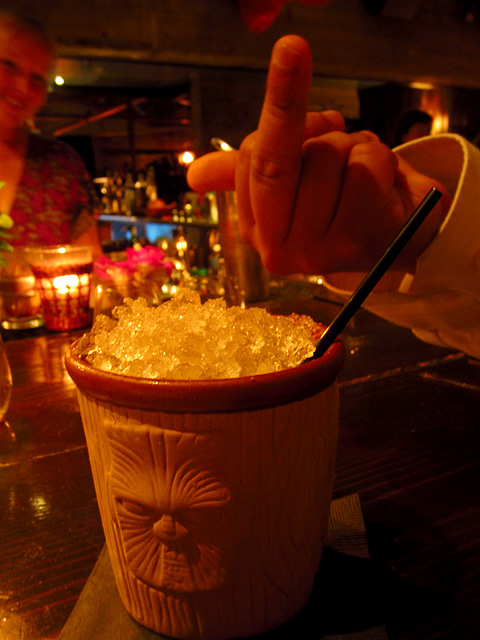 With the tasting over, Rum Society members and Caña guests enjoyed cocktails from GM Allan Katz and bartender Danielle Crouch. In keeping with the spirit of independence, Lush Angeles ordered a couple of delicious Painkillers PKNYs, complete with a special message for a certain British Navy Rum.