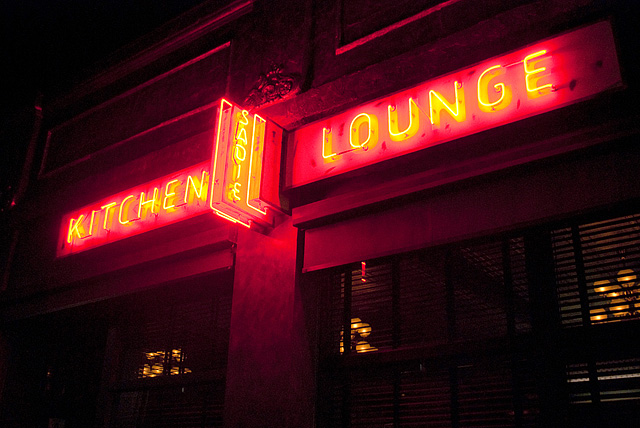 The story of Sadie Kitchen & Lounge is worthy of its Hollywood setting: the former site of the infamous Les Deux nightclub, located on property that the Simon family has owned since the end of World War II, was reborn in January of this year as a welcoming urban retreat that offered New American cuisine and craft cocktails in a setting that mixes Old Hollywood glamor and modern aesthetics.

Last month, Sadie welcomed Consulting Chef Mark Gold (Eva Restaurant), who came on board after Sadie’s Executive Chef Dave Schmit (who had been with the team from the beginning) left to pursue other interests. The kitchen didn’t skip a beat during the transition, and now Gold is debuting a Spring Dining Menu that combines Southern California sensibilities with seasonally fresh ingredients and a home-cooked approach. Gold explains, “We wanted to offer food that felt like the kind of thing you would eat if you went to someone’s home for Sunday dinner – comforting, but with a more refined spin on it.” Sadie, the Simon family matriarch who would cook every day for groups of up to 20 family members, friends and her son’s employees, would no doubt approve.

The constant since Sadie’s opening has been Giovanni Martinez, Sadie’s Director of Spirits. His previous stints at The Buffalo Club and more recently, Fig & Olive, have served Martinez well at Sadie. Martinez oversees a menu of craft cocktails that can be enjoyed on their own, yet also pair well with Gold’s cuisine. “I think it is incredibly important to think of the drinks as a piece of the entire experience,” says Martinez. “It should fall in line with the mood, theme and narrative of the bar, restaurant and cuisine…not to mention the neighborhood, time of year and climate. Though my experience is firmly rooted in the 19th Century Golden Age, I’m not a stickler for rules and standards. After all, I’m born and raised in LA, and we don’t like being put in a box.” 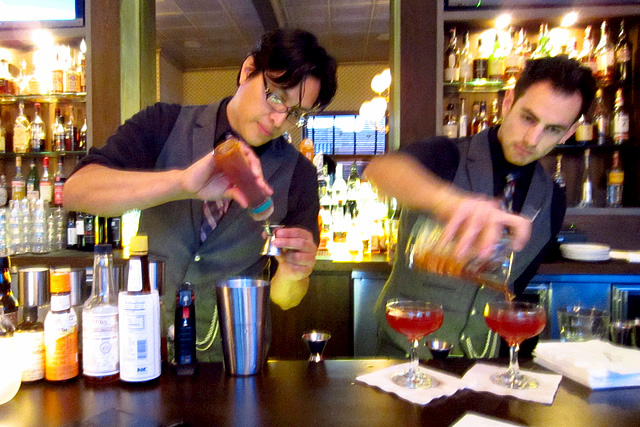 Sadie hosted a media preview that featured a multi-course tasting that paired Martinez’s cocktails with dishes from Gold’s new menu. The event began with drinks at the vintage mahogany bar in the Parlour, where Martinez and bartender Greg Bryson mixed a few rounds to warm guests up for dinner. 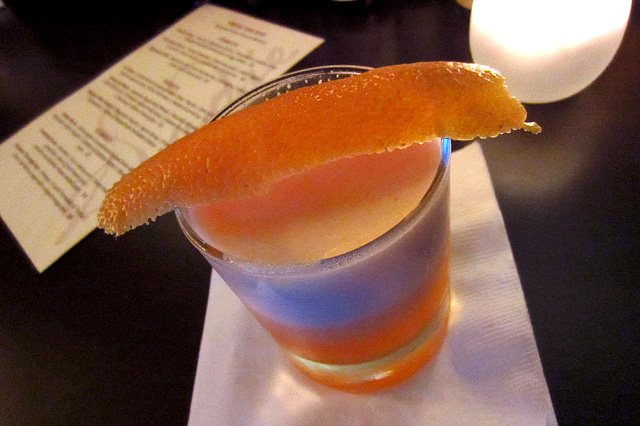 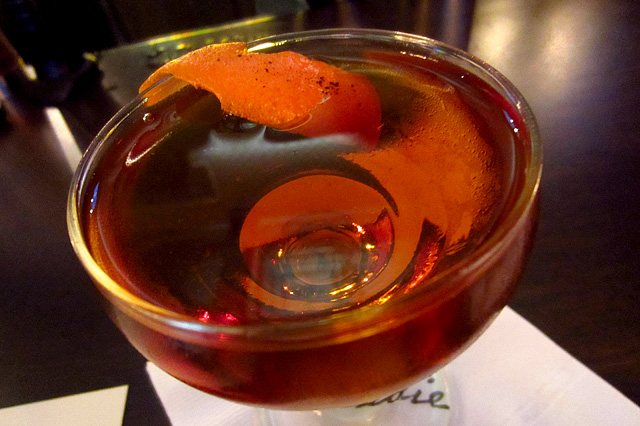 I started with one of my favorites from Sadie’s opening menu, the Oaxacan Through Italy: Del Maguey Pechuga Mezcal, Cocchi Vermouth di Torino, Cynar, garnished with a singed orange peel. With its layers of rich, bitter smoke, the Oaxacan Through Italy is squarely set in my wheelhouse of flavor, though perhaps its assertive character wasn’t the ideal way to begin a night of sampling. 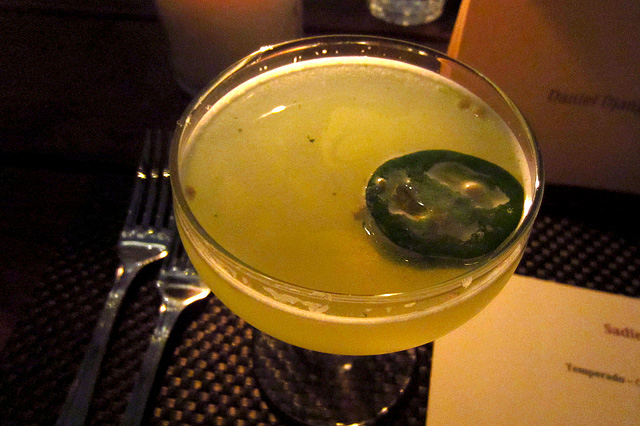 The dinner proper took place on Sadie’s gorgeous Courtyard Dining Room, a spacious patio with an open roof that will surely beckon as the weather warms up in the weeks ahead. After we were seated on the raised wood deck, Martinez and Bryson served the Temperado: cachaça, Avion Silver Tequila, lime juice, fresh cilantro and jalapeño. A subtle, spicy kick was just what the palate ordered as we looked over the menu, accompanied by shimmering light that bounced from a water treatment to the field stone wall behind us. 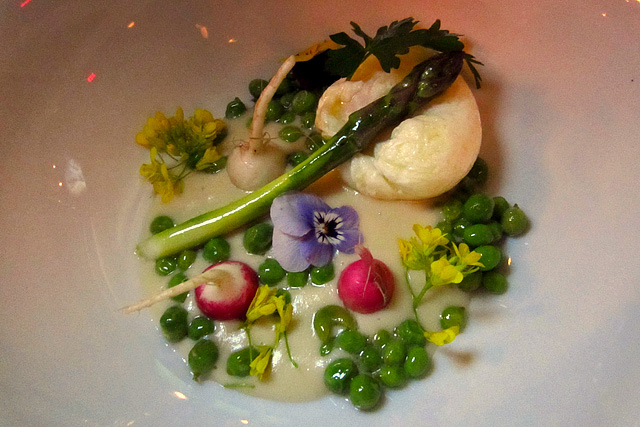 Two dishes made up the first course: the Little Gem (green garlic, crispy ham) and “An Organic Egg, Representing Spring.” Even before the tasting, I was already a devotee of the wonderful Schaner Farm duck egg dish (spring garlic, brown butter asparagus); the picture above is from a previous visit, not the tasting. 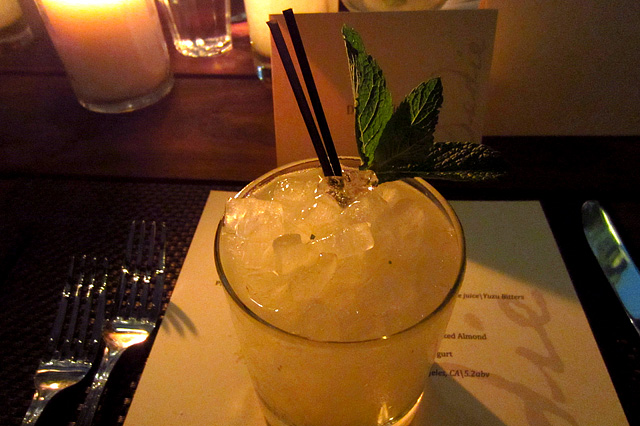 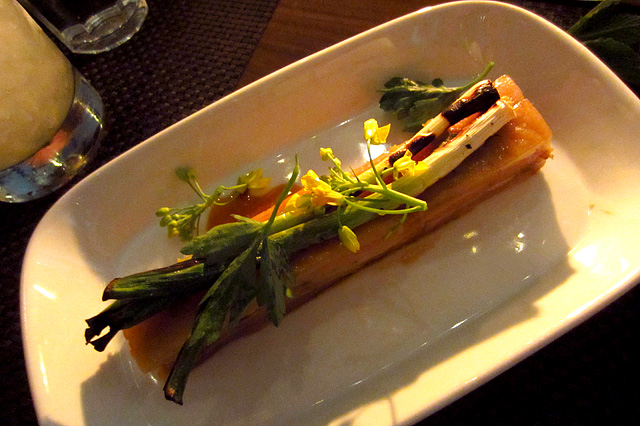 Next, a group of dishes that were shared, family-style: Glazed Pei Mussels; Pork Belly with yuzu kosho, spring onion; Lamb Meatballs; Oysters, Kushii, British Columbia. The accompaniment was Golden Road Hefeweizen, with citrus notes and a dry finish that paired particularly well with the mussels and oysters. 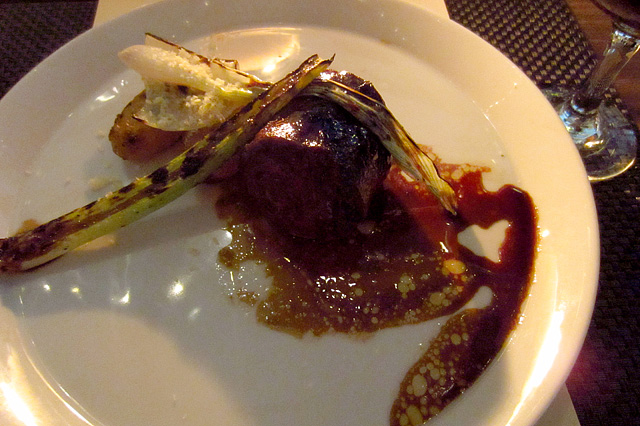 For the mains, guests could choose from one of four entree/cocktail pairings. I opted for the Prime Ribeye Cap with charred onion, Bordelaise, salsa verde. Its pairing with the Oaxacan Through Italy was inspired, with the cocktail easily standing up to the strong flavors of the tender, perfectly cooked spinalis dorsi. As we shared bites and commented on each other’s dishes, it became apparent that the consensus favorite was the superb Wild Alaskan Halibut (with grilled asparagus, bacon and onion relish), which was paired with the Friar Fresh: Plymouth Gin, Velvet Falernum, lemon juice, honey, grapefruit juice. 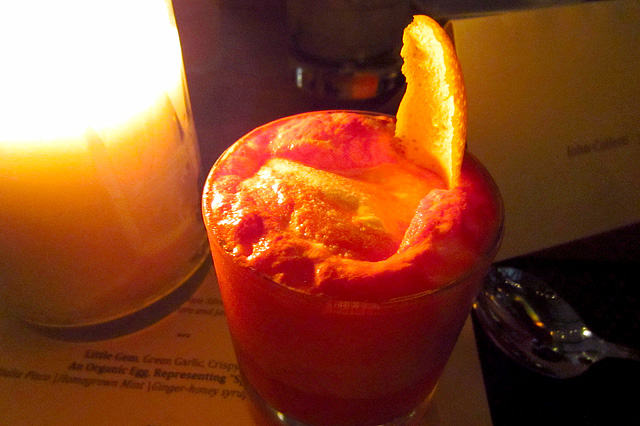 The tasting finished on a high note, with two marvelous ice cream floats: the Fernet and Chip Float (Fernet and Mint Chocolate Chip Ice Cream on Mexican Coke) and the Bitter Float (Peychaud’s Bitters Ice Cream on Sanbitter Italian Soda). I had enjoyed an earlier version of the Fernet Float, and this one was even better, if that was possible. But the revelation was the Bitter Float, like the Oaxacan Through Italy a creation that speaks directly to my taste preferences. You can’t go wrong with either one, but the Bitter Float will be the go-to when those high temps are in full effect.