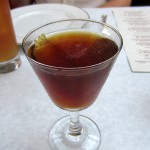 Dining at Terrine, the California brasserie opened in December 2014 by chef-owner Kris Morningstar and restaurateur Stephane Bombet, is like experiencing a lively dinner party. The familial vibe is a natural extension of the affable Bombet and wine director Francois Renaud, who was previously at The Tasting Kitchen in Venice. The bar is helmed by Renaud’s fellow Tasting Kitchen alum, Ryan Wainwright, who features a refined cocktail menu of reinterpreted classics. Inside and out, Terrine is quite the looker – the 64-seat garden patio is one of the prettiest in L.A. and a wonderful setting for Morningstar’s soulful, seasonal cuisine. 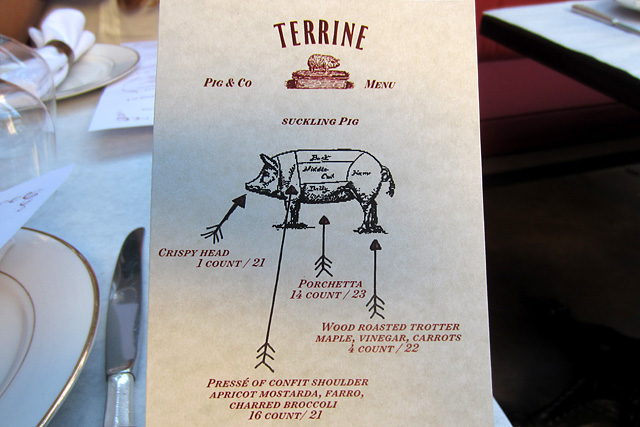 The Pig & Co. menu features a diagram of the suckling pig with corresponding dish counts. At a hosted dinner, there were 14 available orders of the crispy-skinned porchetta and 16 plates of the pressé of confit shoulder, respectively. 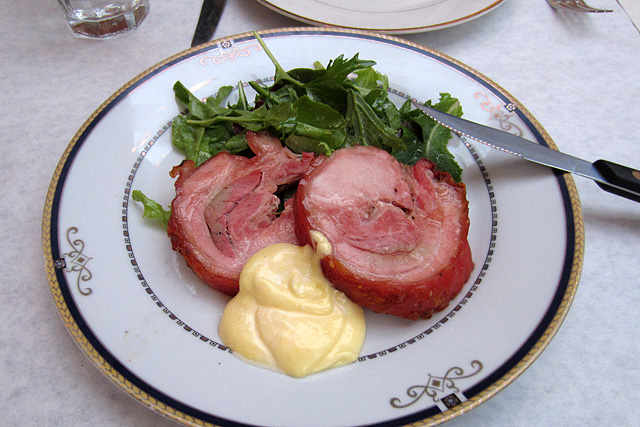 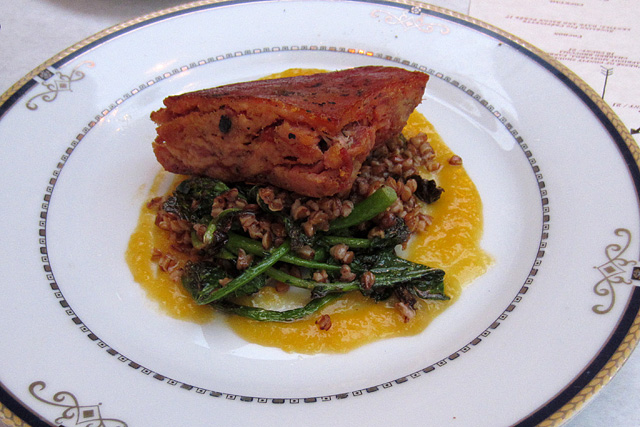 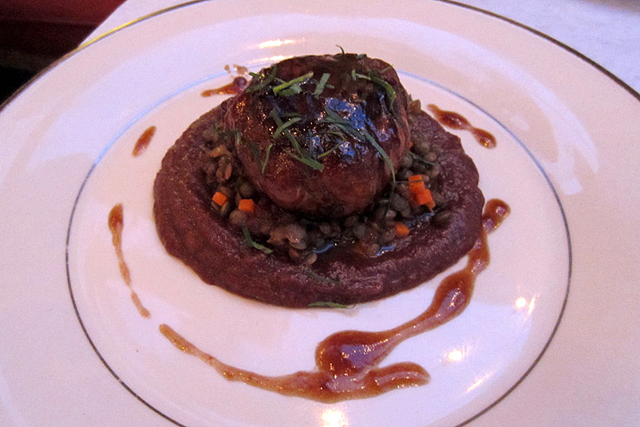 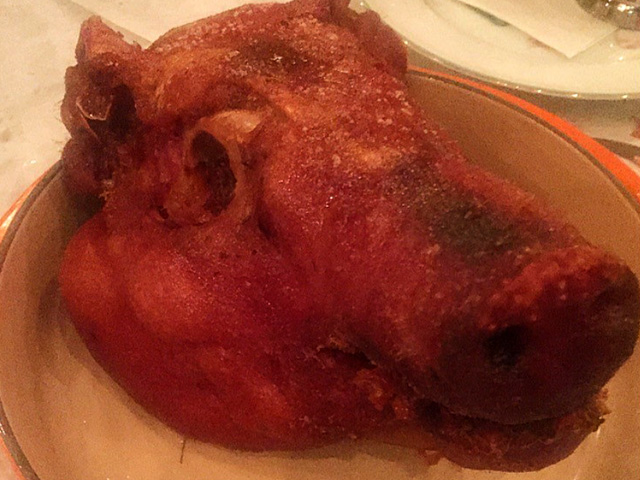 Of course, each Pig & Co. can only feature one Crispy Pig Head – it’s served in a Le Creuset with mint, Thai basil and honey-fermented chili sauce. The head is prepared confit overnight and deep fried to order.

“Coming up with the California Gold was rather complicated just because I was trying to over think it,” says Wainwright. “Once I had this ‘shot and a beer’ idea in my head, I moved on to what I was going to do with a cask strength Irish whiskey that for all intents and purposes was created for real drinkers like you and me.”

Ryan Wainwright at a Green Hour event | Photo courtesy of Terrine, via Facebook

For the Gold Rust, Wainwright tried to understand why “everyone and their mother was telling me Irish whiskey and wood-roasted pig went so well together. Being a giant stick in the mud, I was more inclined to believe Martinis were the answer. That said, I think a Plymouth Martini is the answer to every problem. I was on a mission to believe this idea for myself, and sure enough I think I was able to create some drinks that pair perfectly with what Kris is doing in the kitchen.” 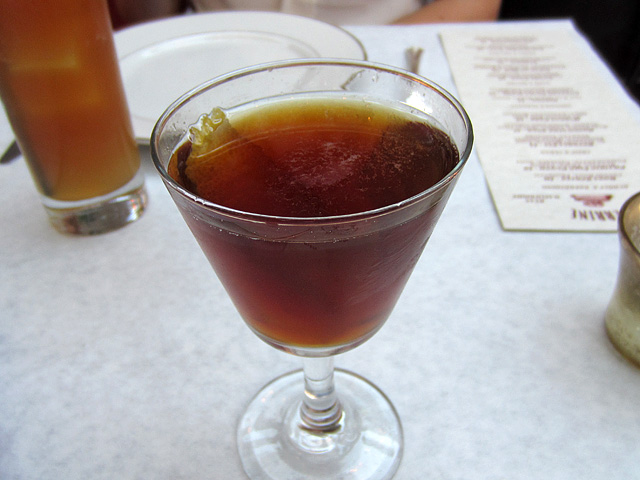 “I’ve seen many things done with this whiskey but when I tried them, I kept getting the feeling that they were working to make a strong, vibrant whiskey soft or even play fair in teams,” says Wainwright. “My goal was really to find a way to make a strong whiskey light but still be the star. There may be no ‘I’ in Redbreast but it sure does spell ‘Rest Bad’ to me. I started to play around with the flavors of the Redbreast. I find the 12-year Cask Strength to have a nose of sherried fruit, stewed apples and vanilla bean.” Wainwright observed that the whiskey’s profile rolls from malty to chocolate, cinnamon, pepper and long, lingering oak. He wanted the Gold Rust to highlight these notes. “It really is a fabulous product in my mind. My goal was to take those notes and condense them into a ball of flavor with what I consider to be spikes of awesomeness shooting out the sides, sort of like a mace – the weapon, not the spray.” Or perhaps like a morning star? (Sorry friends, couldn’t resist.)

“Tightening up the Redbreast in this case was interesting,” Wainwright continues. “I played around with many different vermouths, combinations of vermouths, trying to work on one that would be jammy enough to envelop the whole flavor of the whiskey but not too jammy to drown it in the vermouth bog. Believe it or not, Cinzano 1757 was the one for me. Rather than a prune bomb – we all know what I’m talking about – this has more of a stewed cherry fruit to it. The herbiness is subtle and the oregano finish is pleasant. Blending this with a Medium Dry Sherry by Alvear, I found that with just those three ingredients I was able to make a drink that has such a round flavor with spikes all through it.”

The Gold Rust develops with every sip and delights the palate from start to finish. “The first hit is the malty cherry note and right then you realize this is a whole lot of flavor. Next you hit the chocolatey middle – I’ve had people call me a liar for saying there’s no chocolate in it. Then you fall off what I like to call the ‘sherry cliff’ – the spicy finish of the whiskey meets the oregano of the vermouth and the woodiness of the sherry, and pow you get this amazingly long finish as the whiskey goes from spicy to oaky. The sherry and whiskey then start working together to make a symphony of funk that even George Clinton would be proud of.”

After the jump, Wainwright shares his recipe for the Gold Rust: “I always like to think of Redbreast Cask Strength as a construction worker and this drink taught him how to do ballet.” 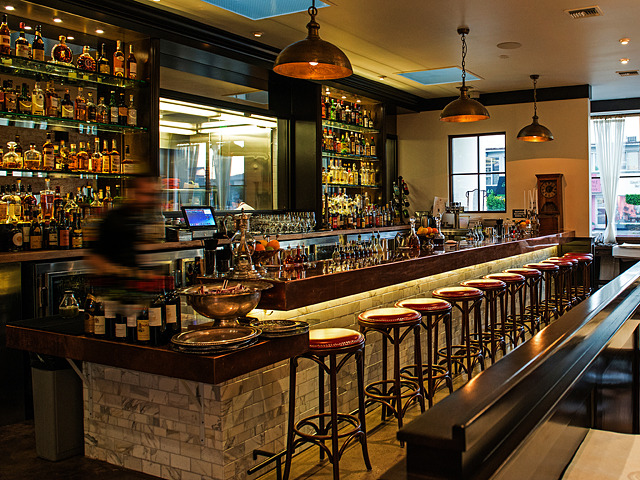