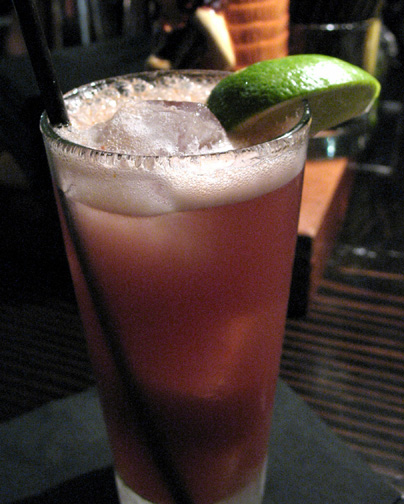 Although President Obama’s recent fundraising visit to Los Angeles caused a traffic nightmare for thousands of rush hour commuters, in other parts of the city drivers had no problem reaching their destinations. Thanks to a nearly deserted 10 Freeway, I arrived in downtown in record time for the Caña cocktail menu launch party, a celebration which just happened to take place on National Rum Day.

Cocktails on the new menu are divided into Daggers, Pistols and Cannons, organized according to their complexity and strength. As I walked into the bar to join my friends Amy and Lena, Caña General Manager Allan Katz and his team were already in full swing, seeing to their guests. We took our seats at one end of the bar, where bartender Danielle Crouch would take very good care of us.

I decided to start with the heavy artillery, a selection from the Cannons section called Day & Age #3: Reposado Mezcal, Gosling’s Black Seal Rum, passion fruit, lime, canela syrup and a mist of absinthe. Wonderfully balanced between smoke and spice, sweetness and tart, this was a shot across the bow to get the Rum Day bash started properly.

Lena went with a Caña favorite, the Tijuana Death March: Potosi Añejo rum, Reposado Tequila, lime, ginger, pomegranate, Cholula and fizz. As with the Day & Age #3, the TDM is a Cannon that wields some firepower in its effervescence.

Amy started with a Dagger called the JKO, a tribute to Jackie O made with Barceló Gran Añejo, Amaro Montenegro, lime, poached plum syrup, bitters and pepper. Amy loved this first drink; she would get on a roll with her menu choices on this night. 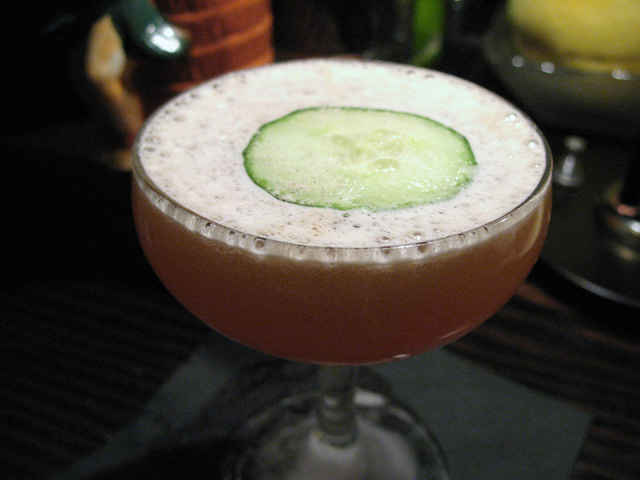 After quickly polishing off her TDM, Lena next had the Algo Mas, an intriguing Pistol made with Leblon Cachaça, Cynar, kaffir-spiked watermelon, fresh citrus, pineapple and Pandan syrup.

Amy stuck with the Daggers for her second drink. The Incan Wonder Drug features Leblon Cachaça, market berries, lime, Peychaud’s bitters, Maca, blended with a touch of condensed milk. Amy was two for two with this excellent cocktail, a smoothie for adults. 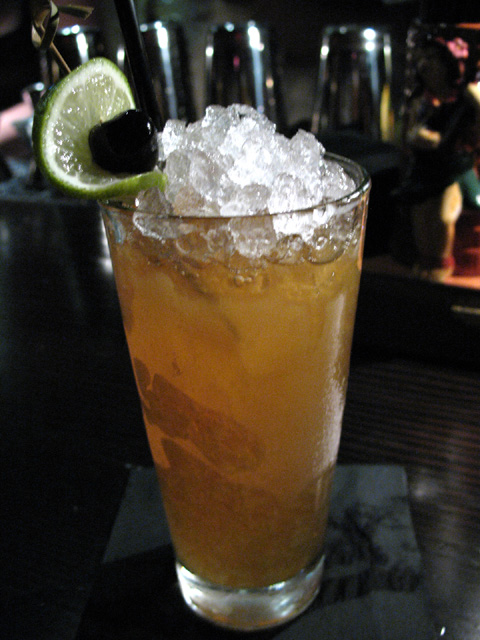 For my second drink I took another hit from the Cannons, this time the Smith & Hart Swizzle: Lemon Hart 151 Proof Demerera rum, fresh citrus, maraschino and Smith & Cross Jamaican rum. Skyler Reeves (213 Downtown operations manager) took a sip and remarked, “Wow…I think I just got instantly drunk!” Be sure not to drink this potent concoction near an open flame.

Not surprisingly, my notes and recollections get hazy at this point. Lena definitely enjoyed her Rum & Coconut Water, sipping Cruzan Black Strap from a young Thai coconut. After scooping out the coconut (“it’s the drink that eats like a meal”), she went with a Hotel Nacional (Bacardi 1909 Ron Superior, lime, apricot brandy, pineapple). Amy finished with a Bird of Paradise (Plymouth Gin, fresh lemon, crème de mure, traditional sours and fizz), exceedingly pleased with all of her cocktails.

My final round was the Lockheed Model 10, made with Dos Maderas 5+5 Jerez-aged Caribbean rum, fino sherry, peche de vigne, Amaro Abano. The aromatic, complex cockail was the perfect way to end our National Rum Day session, an amazing array of drinks that still leaves many more enticing items on the menu left to explore.

NOTE: The Dos Maderas PX (5+5) will be one of the featured rums at Rum Society V, taking place at 7pm on Tuesday, August 31.

As announced in the Caña newsletter, this will be the last Rum Society for John Coltharp as head bartender.