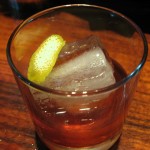 Thirsty in Waikiki: Mai Tais, Lewers, and Whiskies! Oh, My! 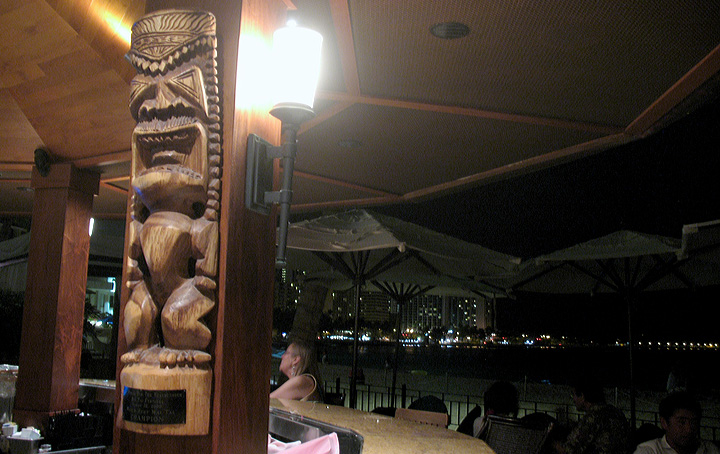 Not that one ever needs an excuse to go to Hawaii, but in October a longtime family friend’s wedding in Waikiki was the perfect reason for my family to take our first vacation together since an incredible trip to China a few years ago. During my last visit to Hawaii, I spent a couple of blissful weeks in Maui, a trip that was likewise centered around a wedding. Oahu may not be everyone’s first choice of the Hawaiian Islands to visit, but besides the gorgeous sights and wedding-related events I attended with the family, the fine cocktails I enjoyed helped dispel my preconceived notions of Waikiki’s tourist-laden scene.

Our hotel was located a short walk from world-famous Waikiki Beach, and on our first night I stopped by the beachfront Mai Tai Bar at the Royal Hawaiian Hotel, the legendary “Pink Palace of the Pacific.” For good or bad, no other drink represents Hawaii as much as the Mai Tai, which was invented by Trader Vic in 1944, or perhaps earlier by Don the Beachcomber. In the intervening years, the Mai Tai has since devolved into endless permutations that are mere shadows of the classic tiki drink. But after reading an Imbibe article about Hawaiian drink culture, I was eager to explore the burgeoning cocktail and spirit scene, and among other things perhaps see if the Mai Tai had been rescued from tourist trap purgatory. 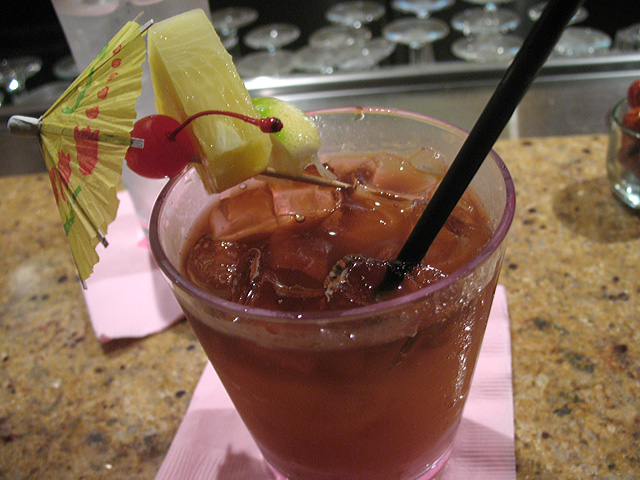 It wasn’t an auspicious start to my return visit to paradise. Had I known earlier that last call at the Mai Tai Bar was at 11:30pm, I wouldn’t have arrived right before closing. While that may seem early for the bar to close, consider that the the Mai Tai Bar opens daily at 10am and it’s at its busiest at sunset. I ordered the Royal Mai Tai, made with fresh pineapple and orange juice, cherry-vanilla purée, Bacardi Superior, Cointreau and Amaretto di Saronno, topped with a float of Whaler’s Dark Rum. The purée gives the drink a slightly pinkish hue, evoking the hotel’s signature color. My expectations were admittedly high, but the hastily-mixed, cloyingly sweet drink would have been disappointing even if I had never read anything about the bar. Then again, it was my first night out in Hawaii in years, the weather was perfect and the ocean waves were crashing against the beach just a few feet away. A mediocre Mai Tai could hardly spoil all of that. 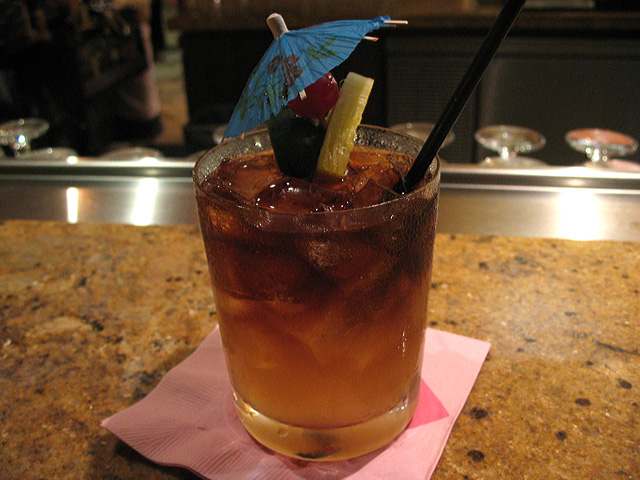 Fortunately, a second visit to the Mai Tai Bar with my brother Andrew the next night turned out much better. We arrived at an earlier time and a different bartender (named Kai) was behind the stick; his skillful preparation made a world of difference. This time I went off-menu with the Trader Vic’s Mai Tai: gold and dark rums, orange curaçao, lime juice and orgeat. A nicely balanced drink and, compared to the syrupy drink from the night before, much closer to what I pictured in a great Polynesian cocktail. FYI, you can also order the Don the Beachcomber version. 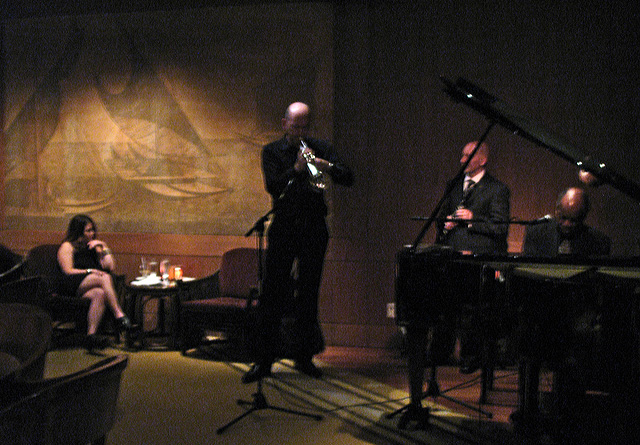 Jazz trio at Lewers Lounge, in the Halekulani Hotel.

The wedding was going to take place at the superb Halekulani Hotel, and it just so happens that Lewers Lounge, one of the bars on my must-try list, is discreetly located within the luxury property. In 2005, Dale DeGroff was brought in to re-design the cocktail menu. Gone are the bottled mixers and soda guns; in their place are freshly-squeezed juices and classic cocktails, along with the requisite tropical favorites.

Unlike most of the bars in Waikiki, Lewers Lounge has a dress code: collared shirts and slacks are required for gentlemen, and evening attire for ladies. (Of course, this being Hawaii, Aloha shirts are acceptable.) As Andrew and I stepped into the dimly lit room, a jazz trio played and guests were engaged in quiet conversation. Hard to believe this was Friday night in Waikiki.

We introduced ourselves to head bartender Tim Rita, Jr., who trained under DeGroff. For the last six years, Tim has infused his own Island style into signature cocktails to go with King Cocktail’s creations. Taking a cue from the classy surroundings, I had a Maker’s 46 Manhattan, as enjoyable as any I’ve had on the mainland. 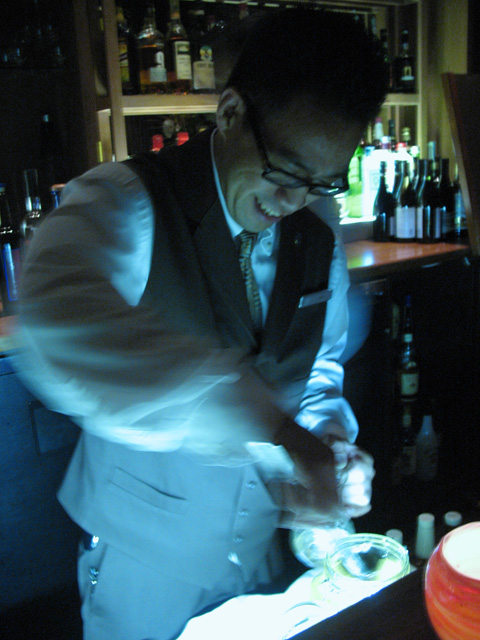 Andrew went with an Añejo Highball: añejo rum, orange curaçao, ginger beer, fresh lime juice and a dash of Angostura bitters. Judging from the speed with which he dispatched his drink, Andrew gave the Añejo Highball an ethusiastic thumbs up.

Tim easily slips into the role of ambassador and is eager to introduce guests to the spirits and ingredients of his home state. Case in point, he poured a taste of Maui Okolehao Liqueur, from Haleakala Distillers. Taking its name from the Hawaiian moonshine known locally as “oke,” the 80-proof Maui Okolehao is made from the root of ti plants grown on Maui. It’s a unique liqueur, with distinct notes of vanilla and coconut.

Tim then poured a taste of Old Lahaina Dark Rum, also from Maui. Just a month after beginning distribution in February 2010, Old Lahaina’s Gold and Dark rums were both awarded Bronze Medals at the International Rum Festival. With its strong vanilla and molasses notes, the Dark Rum would make for an ideal Mai Tai float.

As we enjoyed our cocktails and sipped the spirits, Tim talked about Art of the Cocktail, a weekend of classes and parties held at the Halekulani in September. Among the cocktail luminaries in attendance were Dale DeGroff, Tony Abou-Ganim, Julie Reiner and Simon Ford. For Art of the Cocktail, Tim created the Island Lava, made with reposado tequila, Cointreau, Hawaiian chili pepper simple syrup, lilikoi (Hawaiian passion fruit), calamansi juice and a black sea salt rim. Though he didn’t have all the ingredients to mix a proper Island Lava, Tim did make us a sample that included the lilikoi and the infused simple. It was a wonderfully spicy and tropical take on a classic margarita, and a great example of the Hawaiian influence found in Tim’s cocktail creations. 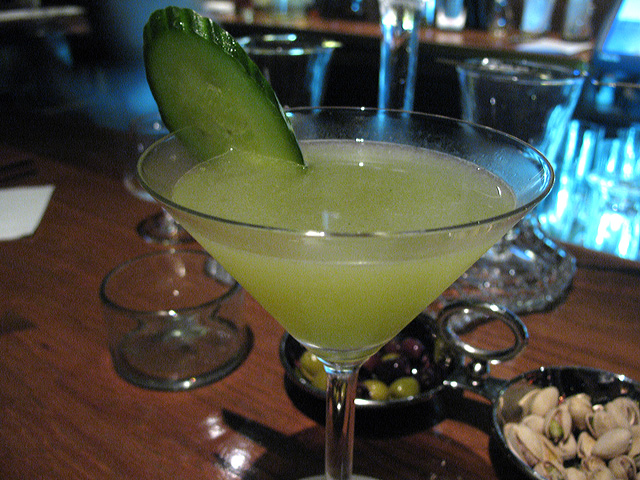 For Round Two, Tim did an excellent version of another one of my go-to drinks: a Pegu Club, made with Plymouth gin. Andrew had another Lewers original, the Amante Picante: tequila, cucumber, cilantro, agave, and muddled jalapeño (not green Tabasco as it said on the menu). This second round again demonstrated Tim’s range in executing classics and signatures with equal skill. For cocktail enthusiasts, Lewers Lounge offers an island of calm and cool in Waikiki’s frenetic ocean of tourism. 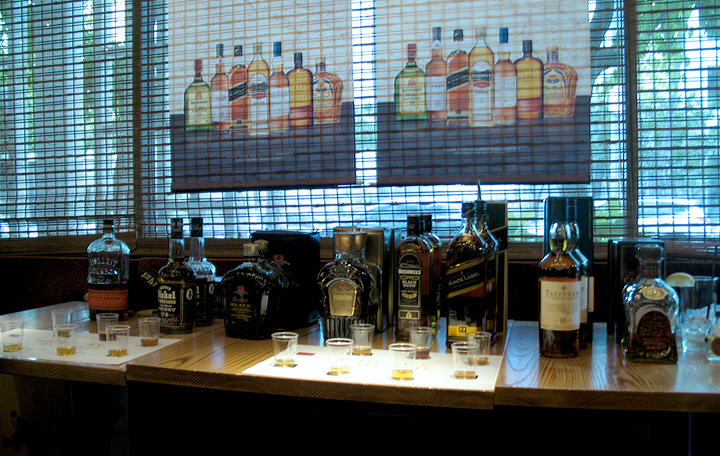 Whiskies of the World

In addition to his position at Lewers Lounge, Tim is also the head of the Hawaii Chapter of the U.S. Bartenders Guild (USBG), which happened to be hosting a Whiskies of the World tasting at Nobu Waikiki the day after the wedding. During our session at Lewers, Tim graciously extended an invitation to the tasting, if I was still in town and had the time. The answer was “yes” to both, and on a rainy Monday afternoon I found myself in Nobu’s elegant dining room for a tasting led by Tom Turner and Joanna Skiba.

Among the notable drams:

With the tasting over, it was time for pupus and cocktails in Nobu’s bar and lounge. David Power (town) started us off with his take on a Campari Cordial, made with Bulleit Bourbon and orange zest. Power’s cocktail was a perfect aperitif for the “New Style” Japanese appetizers that started to come out of the kitchen at a rapid clip. 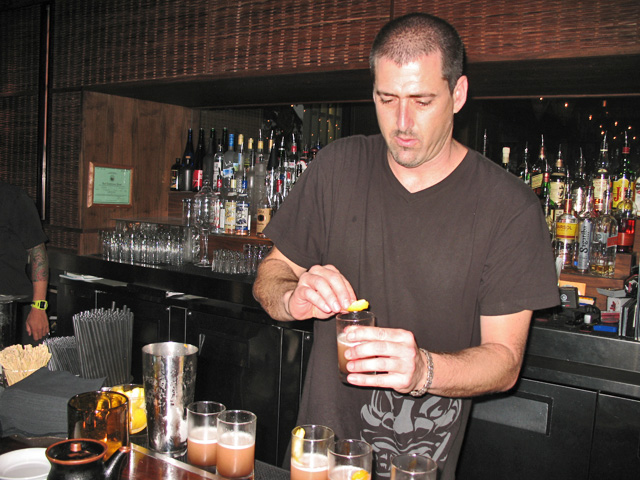 Next up was Kyle Reutner (Apartment 3) and his Tennessee Fizz, a Morning Glory Fizz variation made with Johnnie Walker Black and Grand Marnier, topped with champagne. A classy libation that likewise paired nicely with Nobu’s sophisticated cuisine.

Another unnamed cocktail by David Newman.

The downpour outside was exceeded only by the torrent of creativity flowing inside Nobu, a testament to a global cocktail renaissance that is now in full bloom in the Aloha State. It’s a safe bet that it won’t be such a long time until my next visit; I have a feeling many more cocktail destinations will be added to the itinerary by then. Mahalo, Waikiki!

For more info on Honolulu bars, check out this guide by Simon Ford, which Liquor.com conveniently posted the day I arrived back in L.A. Cheers!