Last week, the new cocktail menu at Caña Rum Bar made its formal debut at the first Rum Society meeting of the year. A few days later, I joined fellow imbibers Caroline on Crack and The Savory Hunter for a hosted tasting of Caña’s new drinks, courtesy of General Manager Allan Katz and bartender Rhachel Shaw. As before, the menu is divided into Daggers, Pistols and Cannons, with drinks grouped according to complexity and strength. The globe-trotting arsenal of cocktails travels beyond Caña’s signature rum, touching down in Europe and the Americas with gin, rye, tequila and cachaça-fueled drinks. 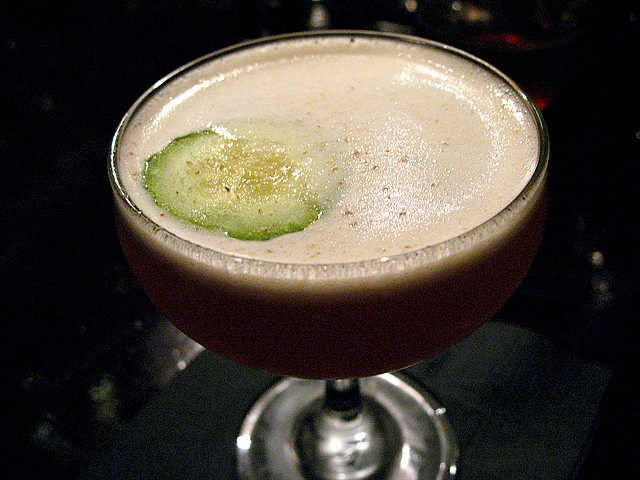 As beautiful as ever, the Caña favorite JKO gets dressed “in fashionably wintry attire” by swapping plum for pear, and is now known as the Camelot: Añejo rum, Amaro Montenegro, lime, poached pear, and white pepper. 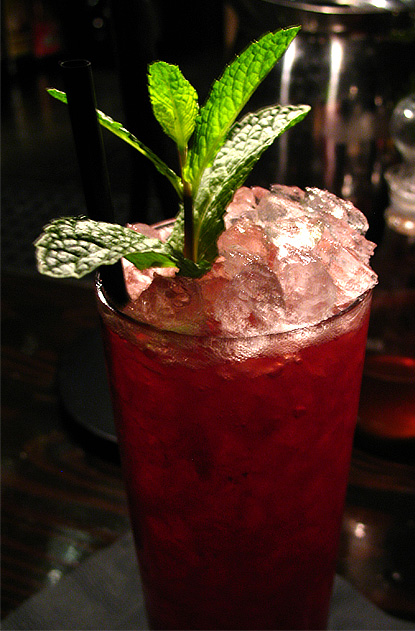 The final Dagger is the Texas Early, an eye-catching rye swizzle named for a species of blackberry: Old Overholt, Don’s Mix, blackberries and lemon. It’s a tossup between this one and the Camelot as my favorite Dagger. 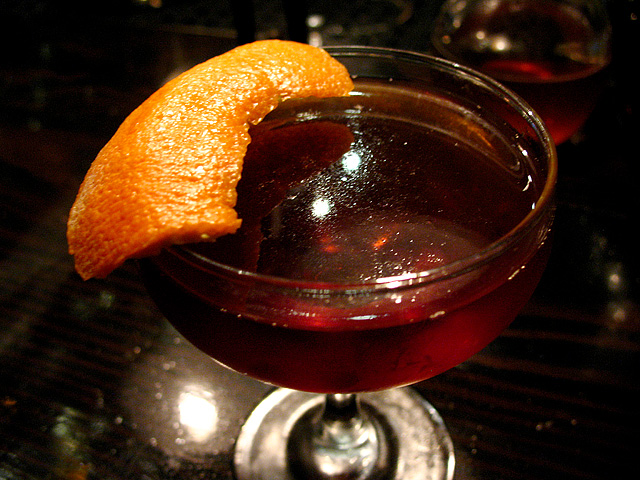 PISTOLS ($12)
The next round began with the excellent Palmetto, a tip of the hat to Rum Society honcho Matt (“Rumdood”) Robold and his take on the Savoy Cocktail Book classic: El Dorado 12 Year Old Demerara, Carpano Antica Vermouth and orange bitters. 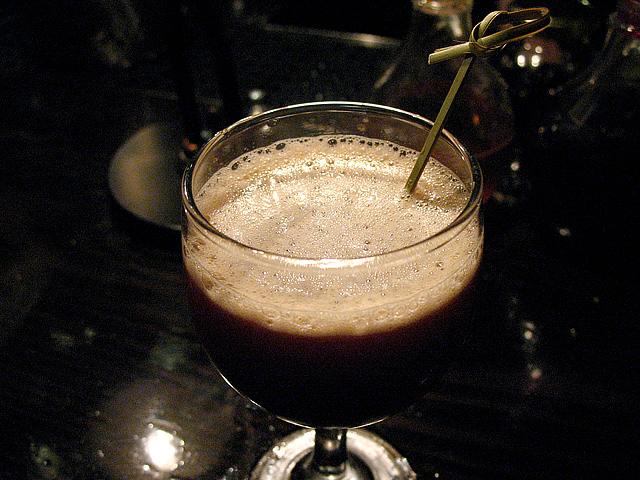 Twist on a Twist

Then came a Last Word variation dubbed a Twist on a Twist: “Chartreuse is exchanged for Amaro, maraschino for darker cherry liqueur, and gin for Smith & Cross. A dash of bitters blesses this beast.” It’s a richly-flavored, textured cocktail of Overproof Rum, Amaro Cio Ciaro, Sangue Morlacco, lime and Angostura. 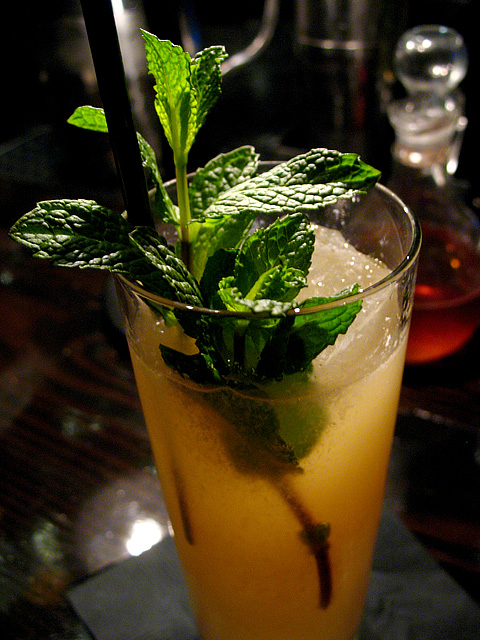 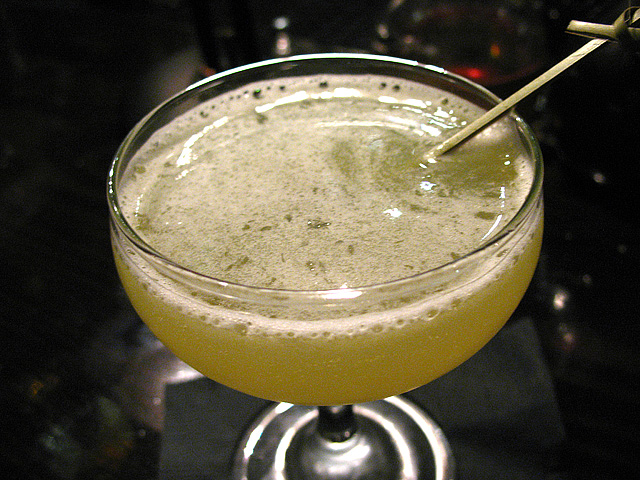 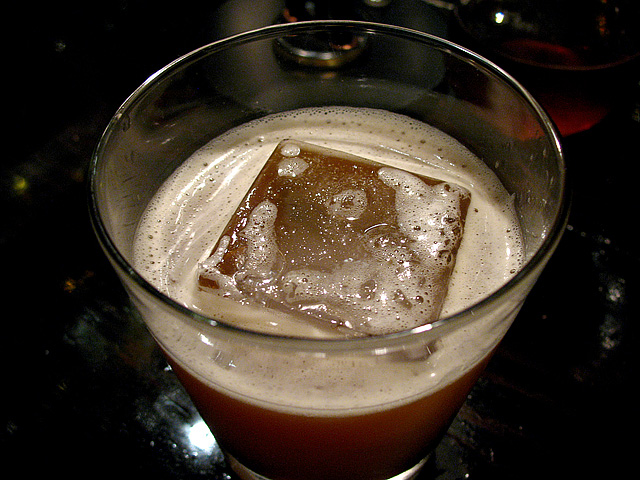 CANNONS ($12)
Then it was time to roll out the big guns. First up was a Shaw creation, the Putnam’s Point: rye, Dos Maderas, Amaro Lucano, ginger, lemon and J.T. recipe bitters. Well-balanced with a tangy bite, the perfect segue into the Cannons. 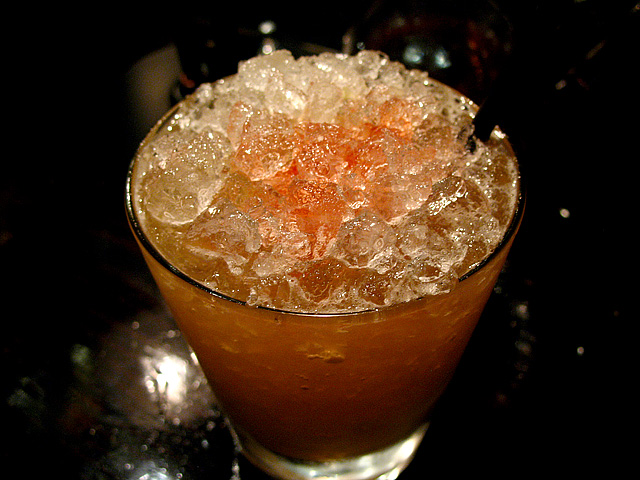 Next was the Red Eye to Rio, a variation on a Trader Vic’s classic called the Night Flight. The Caña version is made with cachaça, lime, maple syrup and a splash of 160-proof Stroh, an evil Austrian rum that stares at you from the ice like HAL. A smooth takeoff to be sure, but no guarantees on the landing. 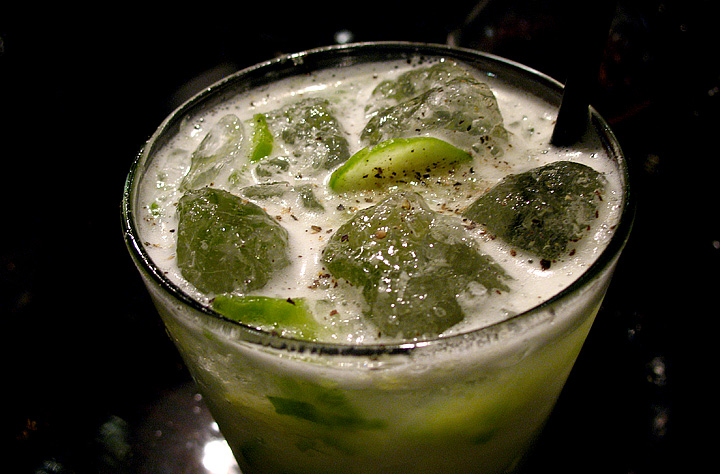 An earlier Gordon’s Cup variation called the Stepping Razor has evolved into the superb London Cut: Anaheim and Serrano pepper-infused Bols Genever and El Dorado rum, cucumber, lime, smoked salt and pepper. Malty, spicy and bright, the London Cut is a piece of artillery with no equal on this battlefield.

According to the Caña menu notes, The Tar Pit had a surplus of Serrano-infused heering and Katz “suggested it play Russian roulette with tequila and rye.” Which of course meant the resulting cocktail could only be called the Deer Hunter: Añejo tequila, Old Overholt and Mr. Winters’ Heering. The spicy kick lingers in the memory, a Cannon that hits with no apologies.

Also on the new Caña menu (though not part of the tasting) are the Weapons of Choice, selected classics and returning favorites such as the Mai Tai, Natural Daiquiri and Rum & Coconut Water. And if you and your friends are truly thirsty, there’s the Punch Service section, featuring “more is more” versions of Caña favorites as well as the Fog-Killer Punch, an epic mash-up of the Fog Cutter and the Painkiller that is thankfully only available in supersize format.