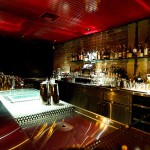 It feels like it’s been there forever, but that’s part of the magic of The Varnish: everything about the intimate space transports you to another era, from the perfectly executed cocktails to the live jazz piano. Adding to its allure is its low lighting and speakeasy-esque location inside Cole’s.

Never one to announce itself, The Varnish is quietly celebrating its Two Year Anniversary on Thursday, February 24th. Eric Alperin and Marcos Tello will be behind the bar, and guests can start the celebration with a complimentary glass of punch, made with Plantation Grand Reserve 5 Year Old Rum and Pierre Ferrand Ambre Cognac. The punch will be served until it runs out, which may not be long if word gets out, so early arrival is suggested.

And for a bit of hometown pride for one of the finest craft cocktail bars in the country, here are just a few of the accolades The Varnish has received since its debut:

Happy Anniversary to The Varnish, and cheers to many more years of great cocktails!