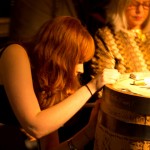 The Scotch That Dreams Are Made Of: Glenfiddich Launches the Cask of Dreams 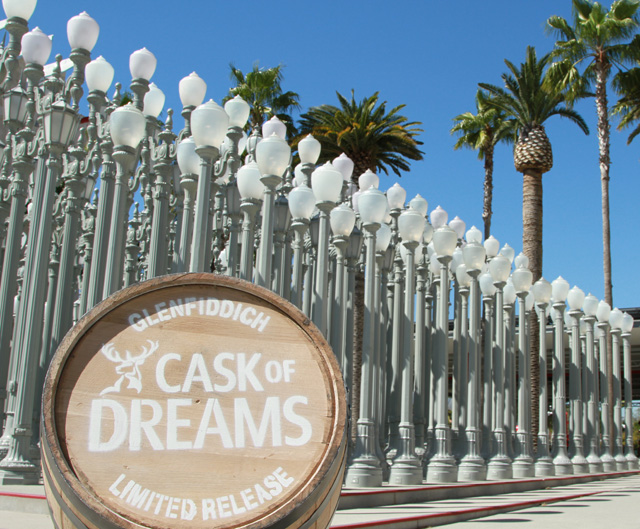 The Cask of Dreams soaks up some sun at LACMA. | Photo: Glenfiddich

Earlier this month, Glenfiddich hosted the official launch of its nationwide “Cask of Dreams” road tour with an exclusive event at the Viceroy Santa Monica. Following on its One Day You Will global campaign, the Cask of Dreams is an aspirational initiative that features Glenfiddich Brand Ambassadors Heather Greene, Freddy May and Mitch Bechard “rolling” 12 casks through major U.S. cities, starting in Los Angeles and ending in New York in May. In each city, the Glenfiddich team will hit the streets and encourage people to write their dreams on the empty casks, as well as enter for the chance to win one of a series of dream trips. Sadly, California and Tennessee residents aren’t eligible for the sweepstakes, but we can still put pen to cask. (Please see the Official Rules.) After public barrel rolls and cask signings, each stop on the tour culminates with a VIP event, where attendees sample various Glenfiddich expressions and are given an opportunity to write on the cask.

If the casks don’t make it to your city, you can still post your life ambitions on the dedicated Cask of Dreams website. For every dream posted, Glenfiddich will donate $1 to the National Geographic Explorer program, which funds scientists, adventurers and others. And, like those who write on the casks in person, those who post to the site will be entered to win a dream trip. At the end of the tour, the inscribed casks will be sent to the Glenfiddich distillery, where they will be used to finish a special limited edition expression of Glenfiddich, which will be sold in the U.S. in early 2012.

The Viceroy launch event began with a cocktail hour, featuring Glenfiddich-fueled drinks like The Ruby Bean: Glenfiddich 12-Year, Lillet Rouge, Licor 43 and orange juice. It was a nice take on a Blood and Sand and a good pairing with the passed apps. Bechard then introduced the Cask of Dreams campaign and invited us to sign the cask, which had already made appearances at the Santa Monica Pier and the Hollywood Walk of Fame.

Besides tasting various Glenfiddich expressions (including the 15-, 18- and 21-Year Olds), the highlight of the event was a sneak preview of the Cask of Dreams whisky itself. The dram was from a test batch of next year’s limited edition release, which will be made of whiskies from 14 to 16 years old. The final product will of course be different than what we tasted, but the sample hinted at a rich, spicy and oaky expression that will surely appear in the dreams of many a Scotch aficionado in the months ahead.