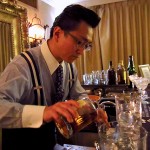 Nonstop to Tokyo: A Tales of the Cocktail Journey with Hidetsugu Ueno

The description for Nonstop to Tokyo in the Tales of the Cocktail event listings had me hooked right away:

Reserve a seat on Suntory Air flight #1923, non-stop from Downtown New Orleans to Ginza and hop on the Tokyo Metro bullet train to the legendary Bar High Five. First, you will join Uncle Torys in the Highball Lounge for a few refreshers to settle you in and shed the jet-lag. Once adjusted to Japan-time, we will escort you to the bar where you will be cared for by master Hidetsugu Ueno, one of the most respected barmen in Tokyo. This is an experience that very few outside of Tokyo can ever hope to have and a drink that is guaranteed to be one of the most memorable of your life.

Known around the world as one of the leaders of Japanese bartending, Hidetsugu Ueno was the head bartender of the famed Star Bar Ginza before opening Bar High Five. Ueno’s intimate Ginza space is now on many a cocktail enthusiast’s bucket list, and aficionados from around the world have made the pilgrimage to Bar High Five.

The limited-capacity “flights” would depart a only few times during Tales, and they quickly sold out. My journey to the Ginza would begin just minutes after I took a hard hat tour of the Hotel Monteleone (currently undergoing renovations) and an hour after Ed Hamilton’s 6 Rums You’ll Probably Never Taste Again seminar. Not bad for a first day at Tales, and it was only noon! 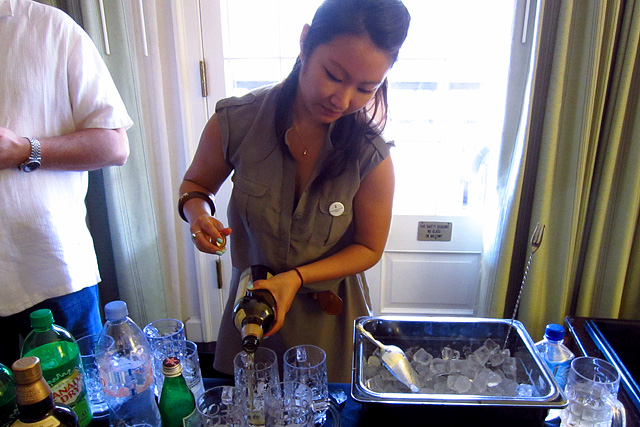 Upstairs in the Royal Sonesta, the air-conditioned Highball Lounge was a welcome respite from the thick New Orleans air. As we gratefully received chilled facial towels, sipped highballs and chatted with fellow “passengers,” the chaos of Bourbon Street suddenly seemed a world away. 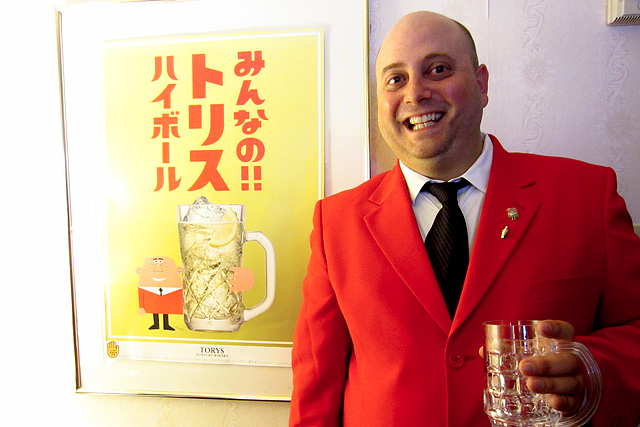 Yamazaki Brand Ambassador Neyah White was in the lounge to greet guests. Shorn of his trademark beard, White was a living, breathing Uncle Torys, the iconic postwar advertising character enjoying a renaissance thanks to Japan’s current highball craze and Suntory’s ad campaign.

With our Suntory Airlines boarding passes in hand, White escorted us into the next room, where Bar High Five awaited. The curtains were drawn, the lights dimmed and jazz was playing in the background. And behind the bar, Hidetsugu Ueno. 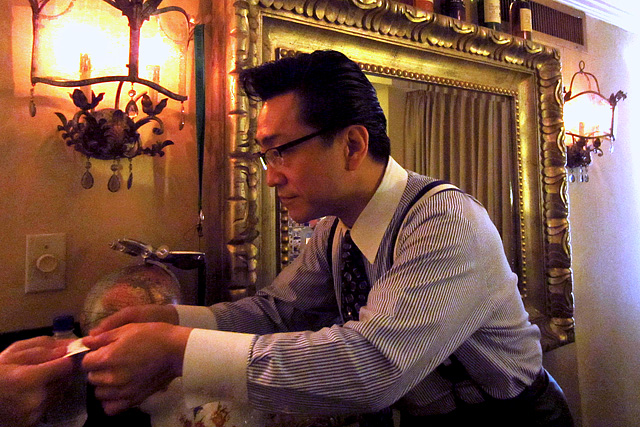 Ueno presents his business card to a guest.

There was seating for seven or eight guests at the bar, where we were welcomed by Suntory’s North American brand ambassador, Gardner Dunn. Ueno presented his business card to each of us, then asked us to select from the short menu of four cocktails, which were served in White’s own vintage glassware. 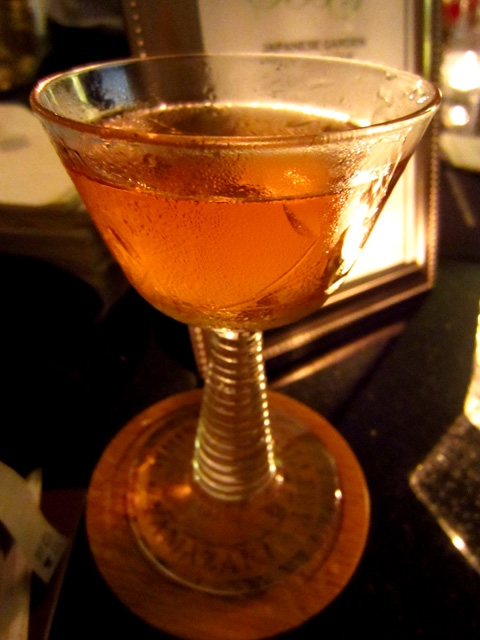 I opted for the Flower Carpet: Hibiki 12-Year, Southern Comfort, Japoné Sakura Liqueur. The Flower Carpet was excellent; fruit-forward and on the sweeter side, with floral notes from the cherry blossom liqueur. Ueno noted that Southern Comfort and the much-maligned Midori (another ingredient on the Nonstop to Tokyo menu) are both very popular in Japan. 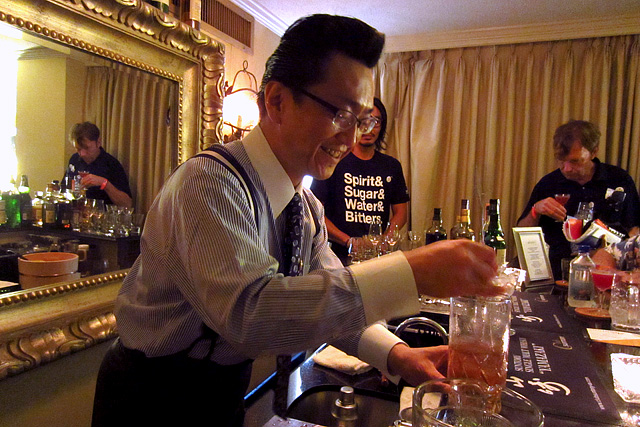 The dapper and engaging Ueno was relaxed and surprisingly funny throughout the session, a sharp contrast to the Western stereotype of the stern-faced, formal Japanese bartender. Despite Ueno’s casual demeanor, we couldn’t help but admire the masterful execution and exquisite technique as he prepared our drinks. The quiet conversation was broken by applause after Ueno demonstrated the fabled hard shake, the much-discussed Japanese method that is said to increase aeration, coldness and improve a drink’s mouthfeel and texture. The hard shake actually appears very smooth and fluid, rather than the aggressive style its name suggests. 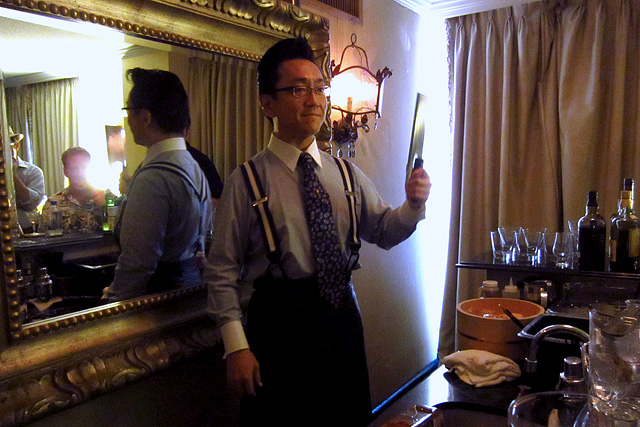 Have soba cutting knife, will travel.

Ueno then made his famous ice diamonds, for which he first became known during his stint at Star Bar. The ice diamonds would be used to chill the Japanese Garden: Hakushu 12-year, Midori, Hermes Green Tea Liqueur. First, Ueno brought out a soba kiri (a specialized knife used to prepare soba noodles) and scored a rectangular block of ice. 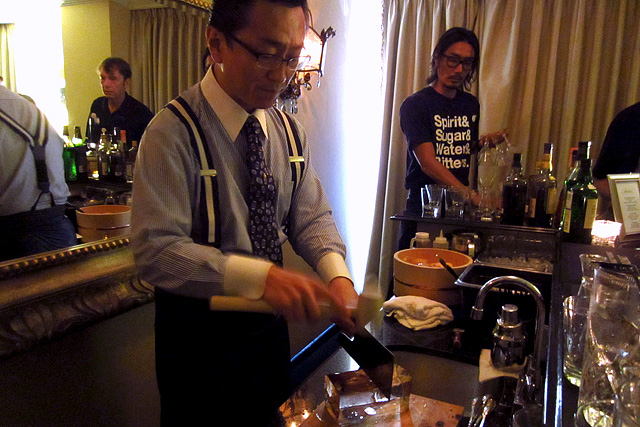 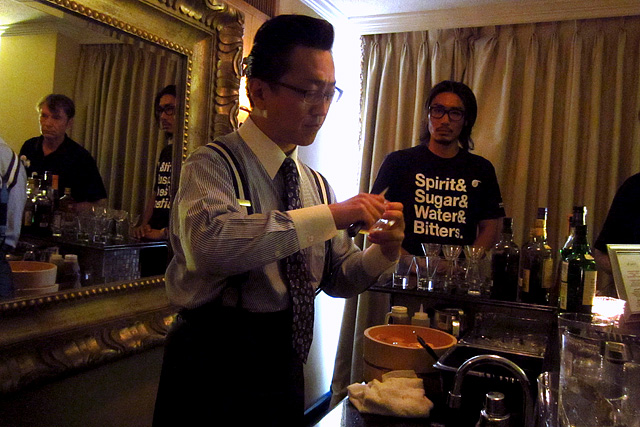 Ueno carves a cube into an ice diamond.

With a small knife, he began to skillfully carve one of the cubes with the practiced ease of someone peeling an apple. The knife was previously used for other purposes, but over time the everyday sharpening has reduced the Japanese steel blade to a fraction of its former length. 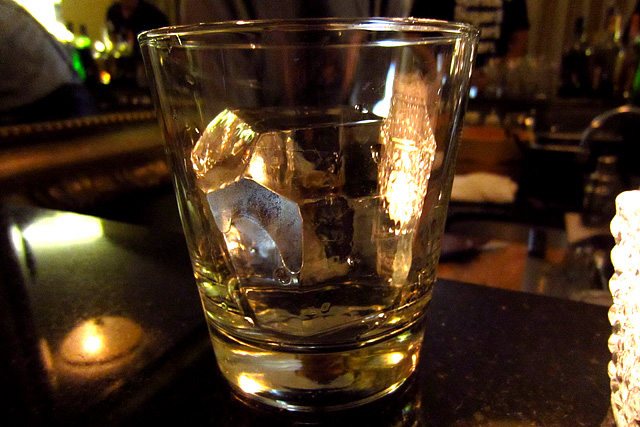 A minute later, the ice diamond is dropped into a rocks glass. 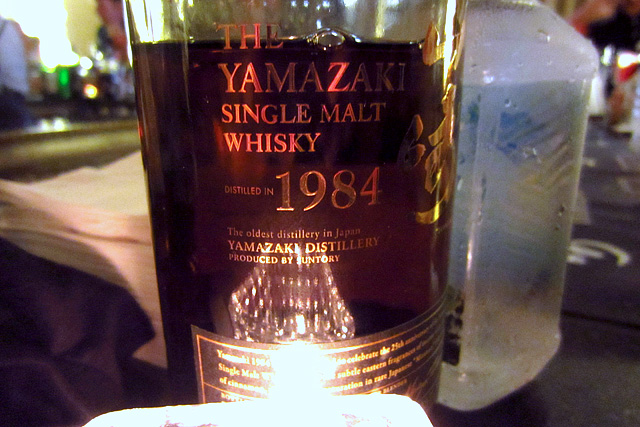 Dunn brought out a bottle of the superb Yamazaki 1984, and Ueno graciously poured drams for the group. In March, the Yamazaki 1984 was named World’s Best Single Malt Whisky at the 2011 World Whiskies Awards. Aged in American, European and Japanese Mizunara oak, the Yamazaki 1984 was the first first vintage Suntory expression available in the U.S. It retailed for $600 when it was released in 2009; good luck finding any now. 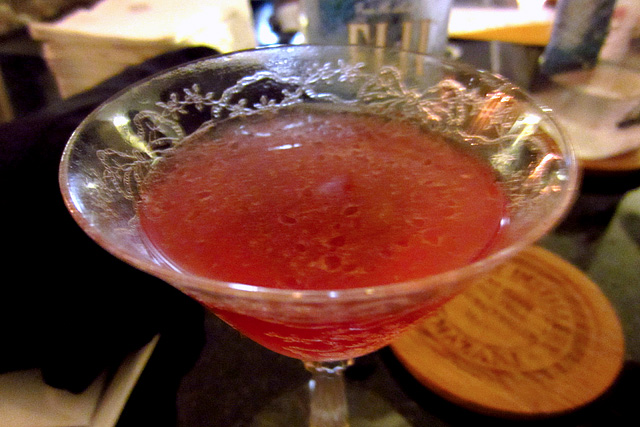 My trip to Bar High Five concluded with the Harvester, made with Yamazaki 12-Year, Suntory Kyoho Murasaki, fresh lemon juice, simple syrup. As with the Flower Carpet, it was well-balanced, sweet and fruity, with the Kyoho grapes a particular stand out. 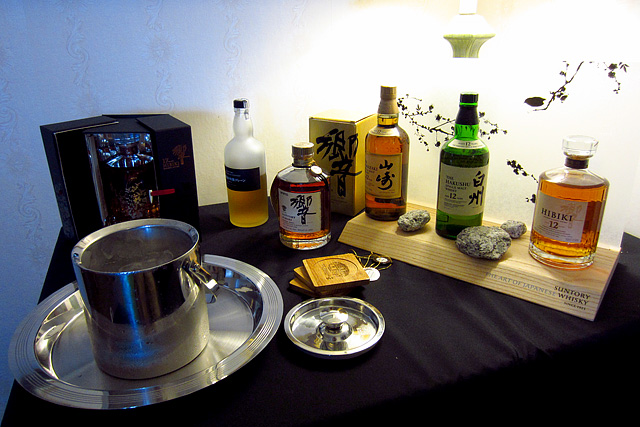 The session with Ueno ended far too soon, but Nonstop to Tokyo wasn’t over yet. As we reluctantly left the bar, we entered a third room, where various Suntory whiskies and a little putting green were available to ticketholders. Best of all, we were told that we could stop into this room at any time during Tales, as long as we had our Suntory Airlines ticket with us. 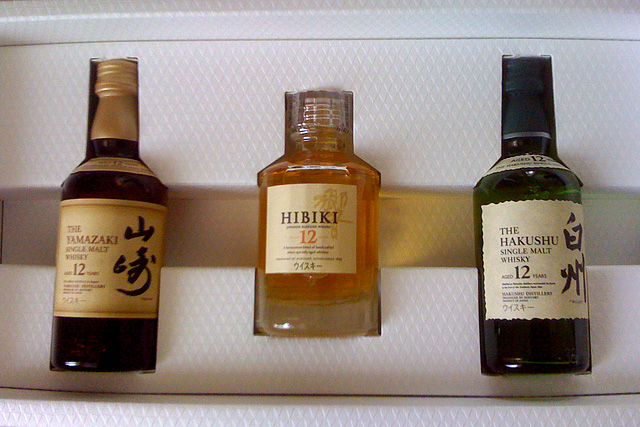 My expectations for Nonstop to Tokyo were high, and it more than delivered. There were certainly bigger and more spectacular events to come in the days ahead, but Nonstop to Tokyo was easily my favorite event at Tales of the Cocktail. From the moment we stepped into the Highball Lounge, to the intimate and enlightening experience of sipping Hidetsugu Ueno’s wonderful cocktails, Nonstop to Tokyo was a trip that I never wanted to end.