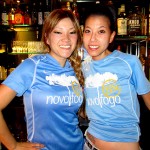 Earlier this week, Novo Fogo Organic Cachaças took over Caña Rum Bar with the first Los Angeles edition of Bars on Fire, an ongoing series of events that features top bartenders offering thirsty patrons a few hours of “Brazilian Zen.” In addition to Novo Fogo cocktails, the Bars on Fire events have other common elements, including bartenders wearing Novo Fogo soccer jerseys, Caipirinhas in a jar (“shake it yourself, will ya?”) and promotional pricing. At Caña, Bars on Fire featured the Lil’ Twisted duo of Cari Hah (Cole’s) and Jaymee Mandeville (Drago Centro).

Novo Fogo founder Dragos Axinte said, “The idea for Bars on Fire started in Portland, while Tommy Klus and I were sipping Stumptown Coffee and stroking the furry belly of Mabel the dog, Tommy’s life partner.” Axinte and Klus launched the program in May 2012, when they were both behind the stick at Central in Portland. While Axinte and his wife Emily run the company from Seattle, Left Coast Libations author Ted Munat coordinates the Bars on Fire series from Spokane. Munat said, “Dragos and I have been friends for years, and based on my event coordination background, he asked if I would lend Novo Fogo a hand. I was honored to accept. Our goals with these events are to have lots of fun, build friendships with bartenders and bar owners, and prove to the world that Novo Fogo is a world class spirit that can be mixed with just about anything.” Axinte added, “Tommy is captaining all the Oregon events and then some. The most unusual location was South in Leavenworth, an awesome Mexican restaurant in this Bavarian town in the Cascade Mountains, where TK and I stirred things up in November.”

Lil’ Twisted’s participation in Bars on Fire can be traced back to last year. Munat explained that when Axinte visited LA and met Hah and Mandeville, he “identified them as people who are awesome, are amazing bartenders, and who responded with enthusiasm to the notion of Bars on Fire.” Mandeville subsequently did a guest bartender shift alongside Axinte at Metrovino during Portland Cocktail Week, at an event hosted by Jacob Grier. Axinte said, “It was awesome. By the end, everyone was doing cachaça bone luges.” Munat continued, “Cari was there and in full Cari glory. The four of us talked about the two of them doing an event for us in LA. Dragos and I both know [Caña Bar Manager] Allan Katz and Dragos spoke with him about doing something at Caña. Jaymee and Cari took some initiative and also spoke with Allan about it, and the next thing you know we had a date set!”

Lil' Twisted Burn It Up!

Besides the aforementioned Shake-Your-Own Caipirinha, Hah and Mandeville featured four Lil’ Twisted cachaça cocktails. My proclivity for the brown and stirred led me right away to the Lil’ Twisted Burn it Up!, made with Novo Fogo Barrel-Aged Cachaça, Drambuie, Angostura bitters and Fee Brothers Barrel-Aged bitters. The cocktail was a fine showcase for the excellent aged cachaça, its vanilla and banana bread notes deftly balanced with the Drambuie’s signature honey and herbal whisky profile. 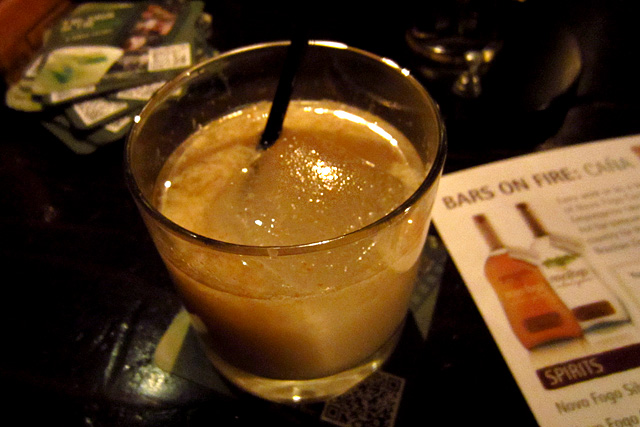 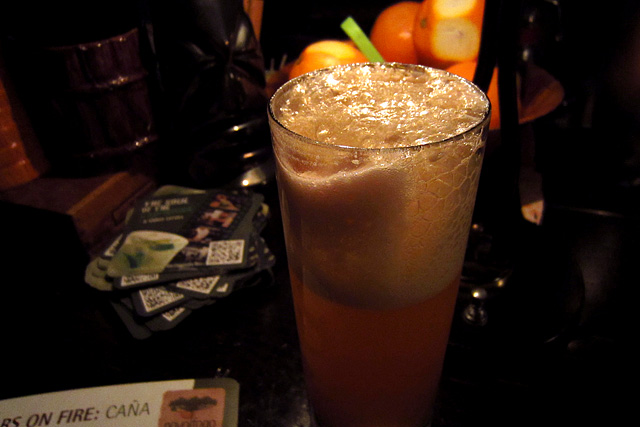 To date there have been 22 Bars on Fire events across the country. Munat said they’re hoping to make Bars on Fire a monthly event in several cities. In addition to Caña, two other Bars on Fire events took place this week, at Jasper’s Corner Tap & Kitchen in San Francisco and Fish Sauce in Portland. Previous cities include Seattle, Spokane, Las Vegas and Atlanta. There’s more Brazilian Zen on the way: plans for future Bars on Fire events are in the works for Chicago, Boston, Tampa, Miami, New York, Louisville, East Bay, Sacramento and San Diego.