As the global cocktail renaissance marches on, mixologists and cocktail enthusiasts continue to utilize the highest quality spirits to anchor classic cocktails and new school creations alike. Founded by Domaine Select Wine Estates (DSWE) in 2009, Classic & Vintage Artisanal Spirits gathers many of these boutique spirits into a single impressive portfolio. Several of these small batch brands recently embarked on a four-city barnstorming tour, featuring spirits from here and abroad, as well as top mixologists from across the country. The Classic & Vintage Road Show itinerary included stops in Miami, Chicago, San Francisco, and Los Angeles.

In L.A., the Road Show was a two-part affair that took place at First & Hope and Las Perlas. Featured brands from Classic & Vintage included: Averna, Azuñia, The Bitter Truth, Death’s Door, G’Vine, Ransom Spirits, Rhum J.M, Sombra, Tuthilltown Spirits, and Suprema. Although the cocktails served weren’t from either venue’s menu, it was fun to take a peek at two locations that are about to make their mark on the L.A. cocktail scene. And of course, it was a great opportunity to enjoy cocktails made with some of my favorite spirits. 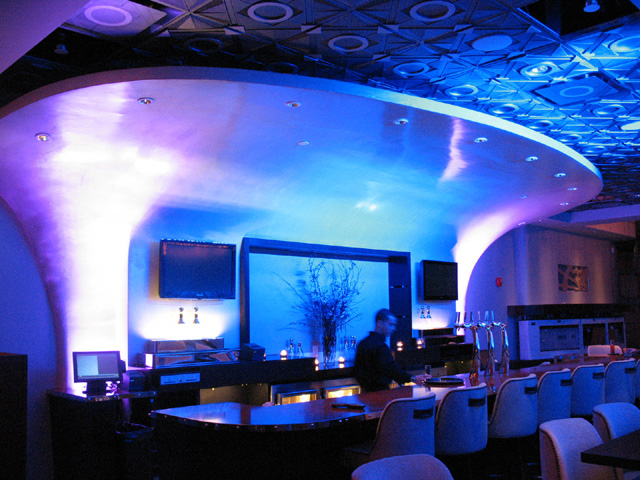 Discreetly located across the street from Walt Disney Concert Hall, First & Hope Supper Club features modern American comfort food by Executive Chef Shelley Cooper and a cocktail menu from Aidan Demarest (former Spirits Director at The Edison) and Marcos Tello (The Varnish). As we walked the space, my friends Amy, Lena, and I were impressed with the build out’s progress as the classy restaurant and live music venue nears its debut.

The main room is divided by a curtain of LED lights, which cast an otherworldly glow throughout the space. To the right is the flowing backdrop of the main bar, while booths and two tops are to the left. More tables are in the back, as well as the door to the Cabaret Room, where the Road Show took place. Although we were a little early, the intimate Art Deco room was already abuzz with activity. Classic & Vintage bartenders Sean Kenyon, Paul Tanguay, and Danny Valdez finished their last minute prep work, and as the singer began her set, the Road Show cocktails began to flow. 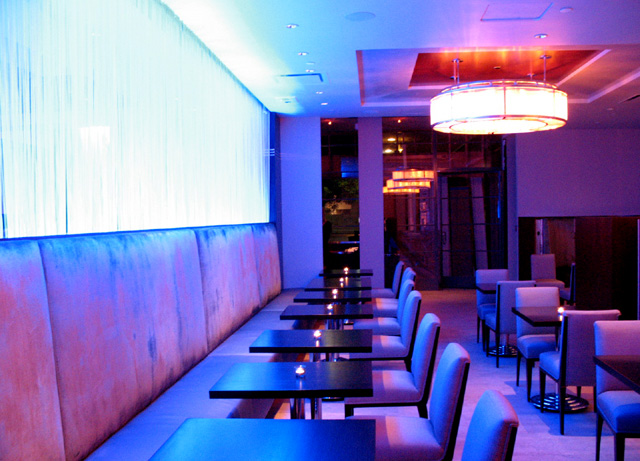 I started with an Albino Old Fashioned, made with Death’s Door White Whisky, brandied cherries, fresh grapefruit, simple syrup, and The Bitter Truth Old Time Aromatic Bitters. The un-aged whisky was mellow and spicy (not unlike a reposado tequila), and with the Aromatic Bitters providing depth, this variation more than holds its own against the classic Old Fashioned.

For my second cocktail I went with a Monkey Gland (G’Vine Floraison Gin, orange juice, grenadine, Averna Sambuca). Unlike our first round drinks, this one didn’t quite work for me. It may have had something to do with swapping out the traditional Pernod/absinthe rinse for the anise-based Sambuca. For whatever reason, it never really came together.

Amy ordered her own Jalisco Hound, while Lena got a Burnsides (Sombra Mezcal, Averna Amaro, honey syrup, minced ginger, lemon juice, The Bitter Truth Old Time Aromatic Bitters, club soda, tangerine, chili powder). Unlike my Monkey Gland, the Burnsides packed a serious flavor punch, from the smoky-spicy Sombra, to the flavorful bitters and bittersweet Averna, and the final kick from the ginger and chili powder. I think I may have liked it even more than Lena; I definitely thought the Burnsides was the best of the round. 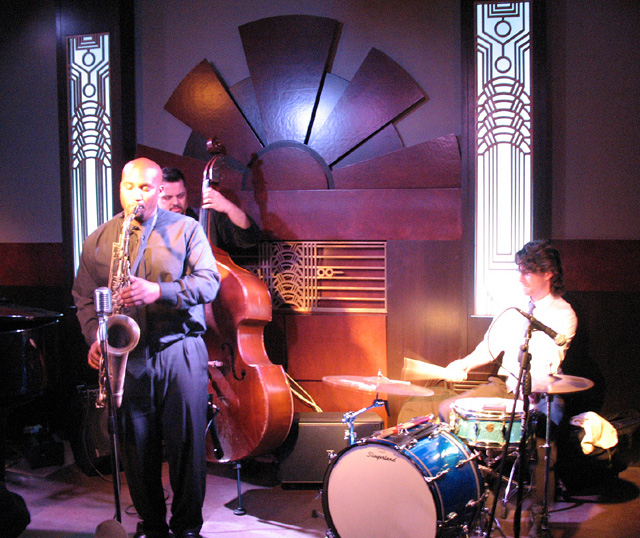 Live jazz in the Cabaret Room.

While we enjoyed our guest cocktails, servers passed samples of the upcoming menu, including shrimp and grits, black-eyed pea soup, and a pork dish served with what had to be the tiniest hard boiled egg ever. Amy and Lena could not stop gushing about the cute little egg. I should also mention the singer and jazz band who entertained guests during the Road Show were fantastic. Here’s hoping they’ll all be regulars at First & Hope.

First & Hope is still weeks away from opening, but the Road Show went off smoothly, guests enjoyed themselves, and it was definitely a sign of good times ahead for the supper club.

First & Hope is scheduled to open later this month.
For more about First & Hope, check out the Squid Ink story at LA Weekly. 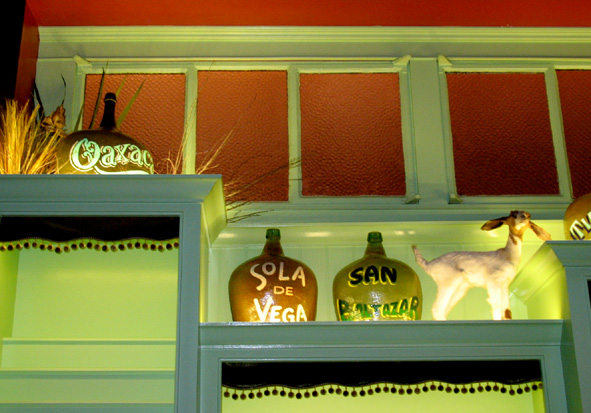 The top of the back bar at Las Perlas.

The next day, a tasting event featuring the Classic & Vintage collection took place at Las Perlas, the mezcal and tequila temple that soft-opens on Tuesday. Located in the Santa Fe Building across the street from Cole’s, Las Perlas is the latest from Cedd Moses and his 213 Downtown collective. “Las Perlas” refers to the bubbles that occur when high quality mezcal is shaken: the more perlas (pearls) you get, the better the mezcal. The cocktail menu is a collaboration between Las Perlas GM Raul Yrastorza (formerly at Cole’s Red Car Bar) and Rivera mixologist Julian Cox. And, as 213’s Seven Grand is to fine whiskey, Las Perlas will feature a top notch selection of mezcals and rare, small batch tequilas.

In a departure from the dark woods and speakeasy style of his other 213 interiors, designer Ricki Kline evokes a Oaxacan cantina with vibrant colors, a porcelain-topped bar, hand-painted signage, and wrought iron chandeliers. A rustic, double-height back bar sat empty, waiting to be filled with the dozens of mezcals and tequilas already written on the chalkboard menu. 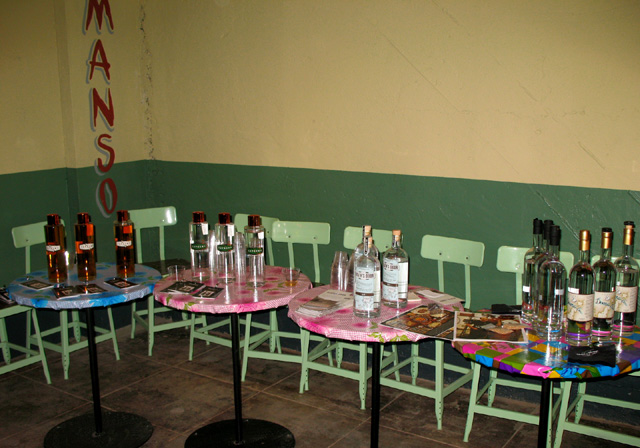 Brand ambassadors representing the Classic & Vintage spirits featured the previous night were on hand to offer tastes, give some background, and answer questions. We started our journey with Death’s Door Spirits of Madison, Wisconsin. Domaine Select’s Sally Kim started us with the White Whisky, based on an organic hard red winter wheat and featured in the Albino Old Fashioned. Aged just 72 hours, the clear spirit is initially sweet and vanilla-filled, with a rich and creamy mouthfeel. Befitting its “white dog” heritage, the bottle has a simple black logo on an otherwise unadorned bottle. Next up was the award-winning, triple-distilled Death’s Door Gin. Sally explained that the gin contains only three botanicals (juniper, coriander, and fennel), each of which make their presence known. It’s a smooth, lightly anise-flavored gin ready-made for hand-crafted cocktails. Last but not least was the Death’s Door Vodka. Like the gin, it’s made from organic wheat. Oddly enough, you can really taste Washington Island in the glass; there’s an earthy, nutty profile that I didn’t expect from a vodka. 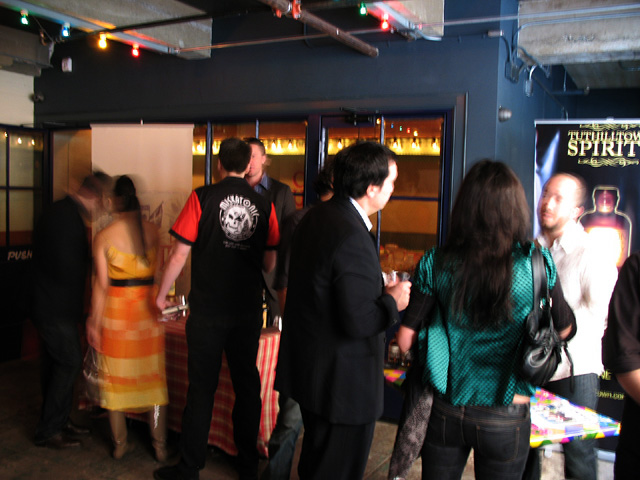 After chatting with other guests we made our way to the outdoor patio, where several brands (including Sombra and Rhum J.M) were set up. We began with Tuthilltown Spirits of Hudson Valley, New York. Brand Ambassador and Distiller Gable Erenzo took us through four expressions in the Hudson range, beginning with the Hudson New York Corn Whiskey. Like the Death’s Door White Whisky, the New York Corn is a clear, un-aged spirit (100% New York corn-based, as opposed to Wisconsin wheat). Naturally, corn flavor asserts itself from the get-go. For a 92-proof spirit, it’s surprisingly smooth, with a lingering finish. After aging in new American oak barrels, the corn whiskey emerges as the renowned Hudson Baby Bourbon. Next up, Gable poured the Hudson Four Grain Bourbon. The twice-distilled whiskey brings together corn, rye, wheat and malted barley in a remarkably smooth bourbon. Its initial sweet vanilla and citrus notes give way to a rich caramel and warm finish. It was even more enjoyable sipped neat than it was in Amy’s Hudson Cup the night before. Then came the Hudson Baby Bourbon, the most popular release in the Tuthilltown line. The Baby Bourbon was Tuthilltown’s first whiskey and the first to be legally distilled in New York since Prohibition. It’s easy to see why the Baby Bourbon is highly sought after: with its superb balance, mildly sweet and citrus notes, and rich, mellow finish, it makes for a perfect introduction to whiskey. We finished with the Hudson Manhattan Rye Whiskey, made from whole grain rye one batch at a time. Distilled with its namesake cocktail in mind, the Manhattan Rye is fruity, floral and smooth, perfectly matched to the sweet vermouth of a classic Manhattan.

We also sampled several fantastic releases from The Bitter Truth, based in Munich, Germany. Founders Stephan Berg and Alexander Hauck are on a mission to spread the gospel of bitters, which suffered greatly during Prohibition, but are finding their way back into the global cocktail consciousness. The Orange Bitters and the Old Time Aromatic Bitters were the company’s first releases, with the latter providing depth and complexity to the cocktails at First & Hope. Cocktailians may be lamenting the Angostura shortage, and while he does say “there’s no substitute for Angostura,” Gary Regan mentions The Bitter Truth Old Time Aromatic Bitters and Jerry Thomas’ Own Decanter Bitters as alternatives, calling the Jerry Thomas bitters “simply divine.” New to the line is The Bitter Truth Creole Bitters, an ode to New Orleans that reminds one of Peychaud’s (similar red hue and anise notes), but with a spicier, more complex profile. We were also lucky enough to taste the SloeBerry BlueGin, not yet available here in the States. Unexpectedly smooth, slightly tart and naturally (but not cloyingly) sweet, the BlueGin is a remarkable sipping gin. Its initial sloeberry aroma gives way to an aromatic, fruity yet spicy finish. Let’s hope the BlueGin arrives before the summer, because served in a highball with tonic and ice, this will go down a storm. 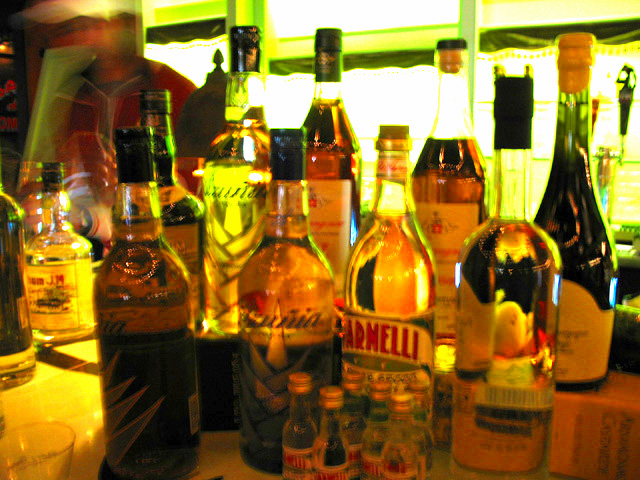 Selections from the Classic & Vintage collection.

As the event wound down, I glanced at the huge selection of mezcals and tequilas. We’ll be back soon, ready for our journey to the heart of the agave.

You can find more information about the Classic & Vintage collection at: classicandvintagespirits.com.