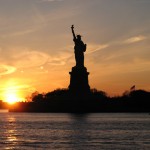 The Three Hour Tour: Around the World in Five Cocktails 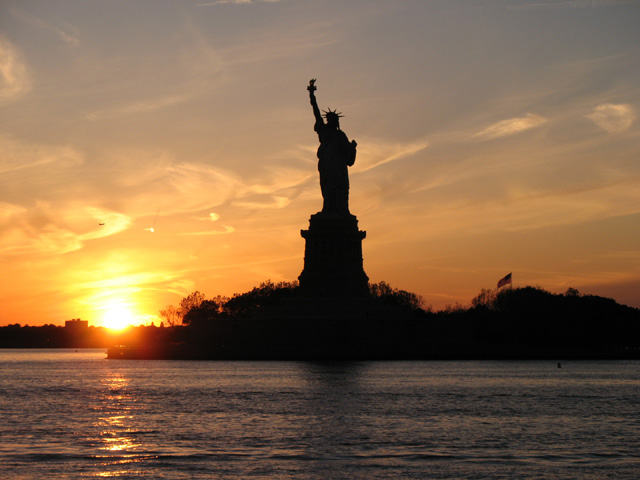 Fifth in a series recapping the 2010 Manhattan Cocktail Classic.

Of the dozens of events that took place during the Manhattan Cocktail Classic, the Three Hour Tour was arguably the most eagerly anticipated. All 242 tickets for the booze cruise quickly sold out, and no matter how desperate your plea or generous your bribe, if you didn’t have a ticket, you were up the Hudson without a paddle.

The Three Hour Tour was conceived and presented by The Tippling Point, “four individuals dedicated to the pursuit of upsetting equilibrium”: Jason Littrell, Gianfranco Verga, Paul Tanguay, and Tad Carducci. Carducci had to be at another MCC event, but as you’ll see, he was with us in more than spirit. 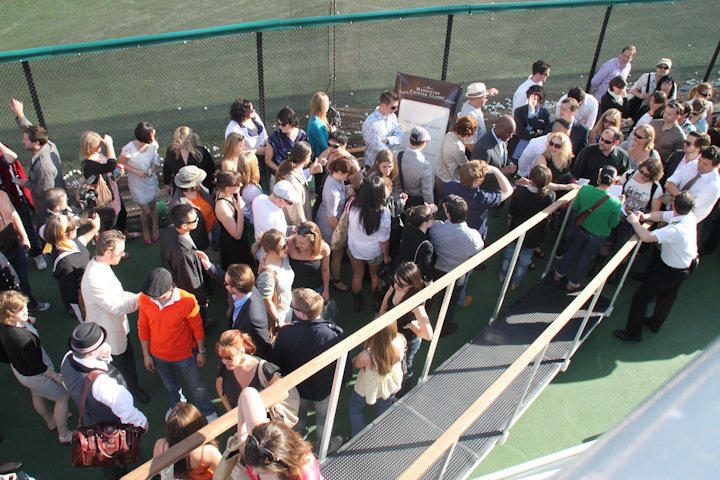 I met up with my friend Tom, his girlfriend Yumi, and her friend Kanae at Chelsea Piers, where the Royal Princess was docked. At the check-in it was more of a crowd than an orderly line, but it didn’t take long and soon enough we were on board the yacht. 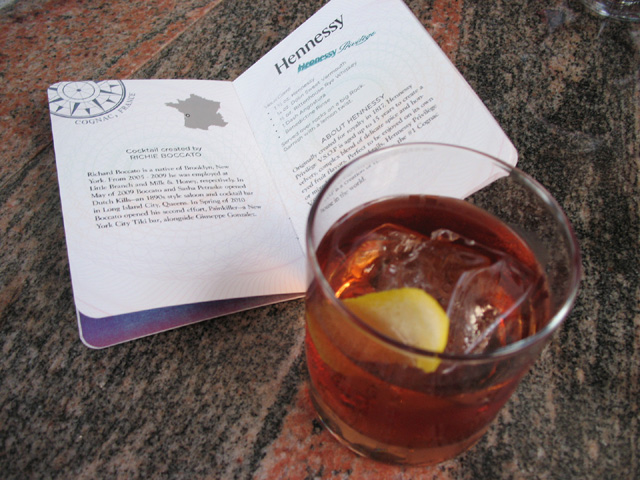 The Three Hour Tour was billed as a voyage “Around the World in Five Cocktails,” a travel theme that was carried through in various ways throughout the event. As soon as we were aboard, we were issued “passports,” which included drink recipes, mixologist bios, and featured spirits. As you stopped by each cocktail station your passport would get stamped. It was a nice touch that went on until the latter part of the voyage, when the bartenders stopped keeping track of stamps and drinks were served at will. Below decks, the Lush Life crew had set up a photo shoot for passengers to get their “passport photos” taken. 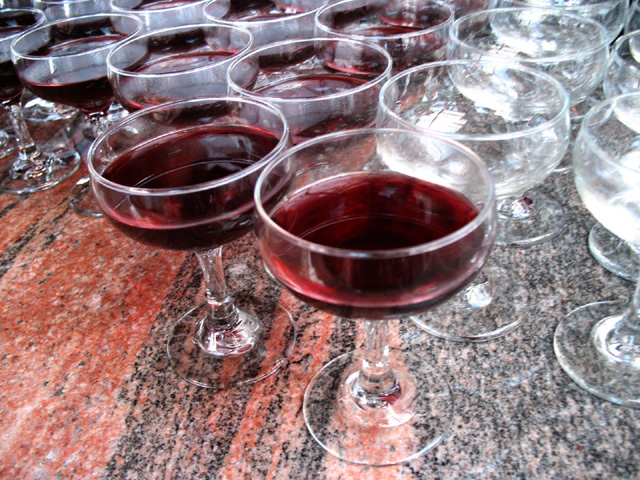 A week's worth of October Nights.

For our first round, we were offered a choice between a Vieux Carré or an October Night, mixed by Richie Boccato (Painkiller) and Danny Valdez (Cure), respectively.

Passports stamped and cocktails in hand, we strolled around the Royal Princess, a three deck yacht with a newly renovated, modern interior and plenty of amenities. A DJ was getting into the groove on the main deck, but other than an empty dance floor there wasn’t much to see, so we went downstairs and found a jazz band in full swing at the far end of the room.

On this deck our cocktail journey took us to France and Scotland, courtesy of Thomas Waugh (Death & Co.) and Jackie Patterson (Heaven’s Dog). First up was Waugh’s Golden Gate, most likely named as a tribute to his previous stints at San Francisco’s Alembic and Range. 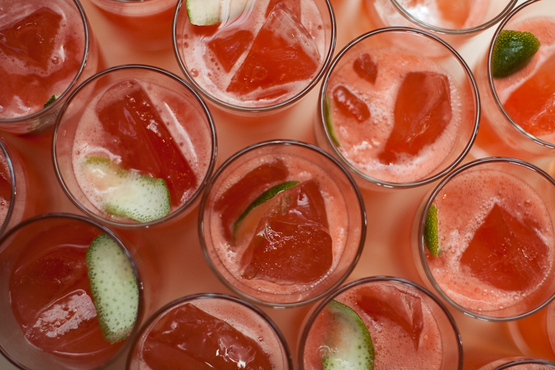 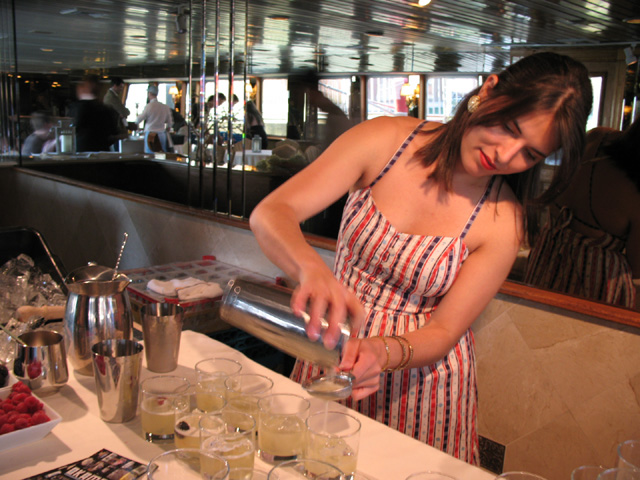 Jackie Patterson wants to know, "Are you ready to visit Islay?"

Towards the stern was Patterson, who greeted us with a question: “Are you ready to visit Islay?” Why yes, Jackie. Yes I am. Her Scotch Fix is a deceptively simple creation with excellent balance, flavor and depth. Needless to say, I would be making return trips. 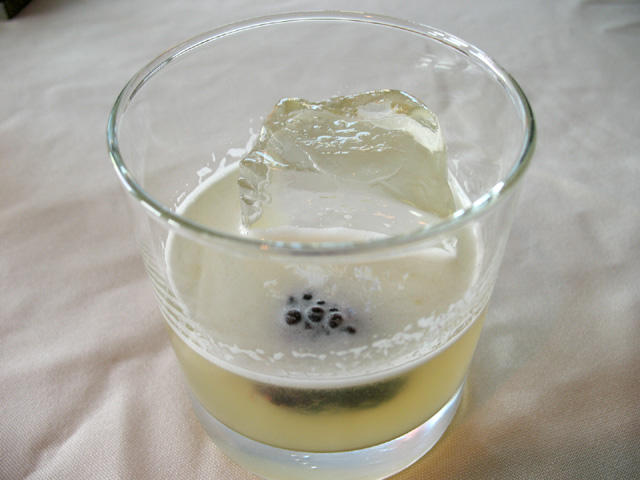 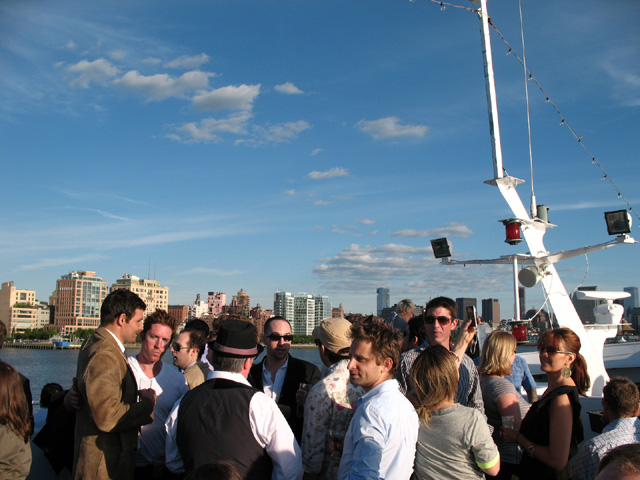 By this time the Royal Princess had left the dock and was making her way down the Hudson River and around Battery Park. We headed up to the rooftop deck and realized why the rest of the boat seemed empty; everyone was hanging out here! The weather was absolutely perfect, so we found a spot and soaked up some late afternoon sun while we enjoyed our cocktails. 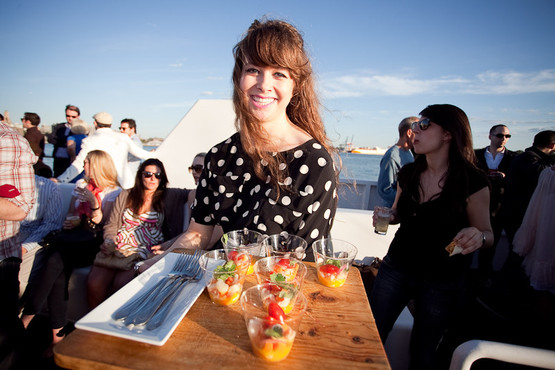 One of several great apps served during the cruise. | Photo: Metromix

Servers were making their way around with appetizers, but because we were seated on a narrow aisle on the starboard side, we weren’t able to partake until later. The galley did a nice job of sending out plates of excellent sliders, tacos, gyoza and more.

But we still had one more country to visit, so it was off to Trinidad we went, thanks to John Lermayer (The Florida Room) and The Landing Strip. 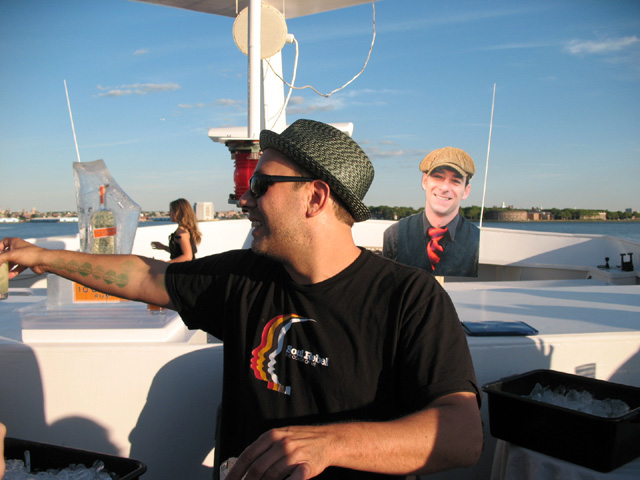 The Landing Strip was being mixed at a rooftop bar set up towards the bow. As we reached the front of the queue, we noticed a cardboard cutout of Carducci watching over the proceedings. “Faux Tad” would turn out be the most popular guy on the yacht; everyone wanted a picture with him. Lermayer had certainly put his years of experience in Miami to good use; his cocktail was the standout of the cruise, a perfect sipper for kicking back and taking in the sights. “Sipper” may be a misnomer, since we inhaled them at a rapid clip. And by “we” I mean Tom and myself. You know a drink is good when it’s finished too quickly to take a picture.

We then headed up the East River and under the bridges, seeing them from a perspective even most New Yorkers never experience. 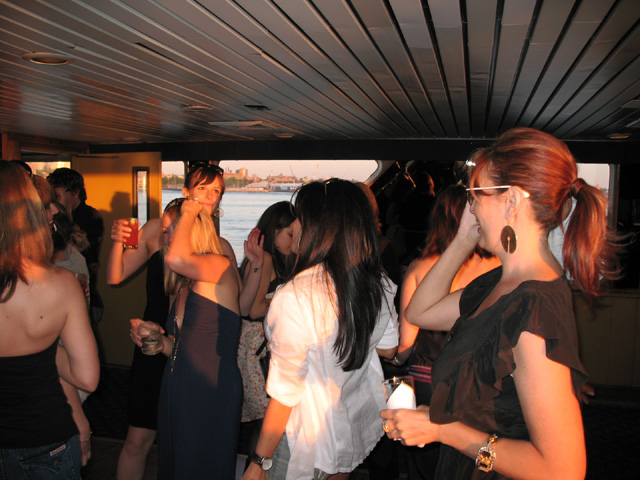 Back on the main deck, the crowd had loosened up and the dance floor was going off as the sun began to set.

But the best was yet to come… 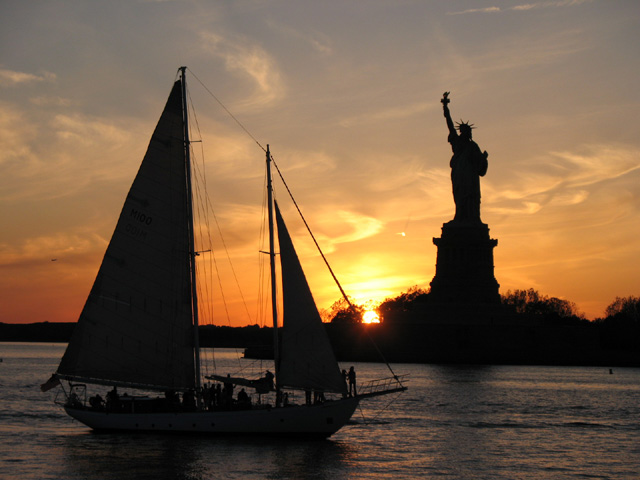 The Royal Princess crew had timed our return trip perfectly, so that we arrived in front of the Statue of Liberty just as the sun was setting. Call me sentimental, but with Lady Liberty silhouetted against the brilliant sky and Empire State of Mind blasting downstairs, I thought it was an unforgettable moment, and the highlight of the cruise. 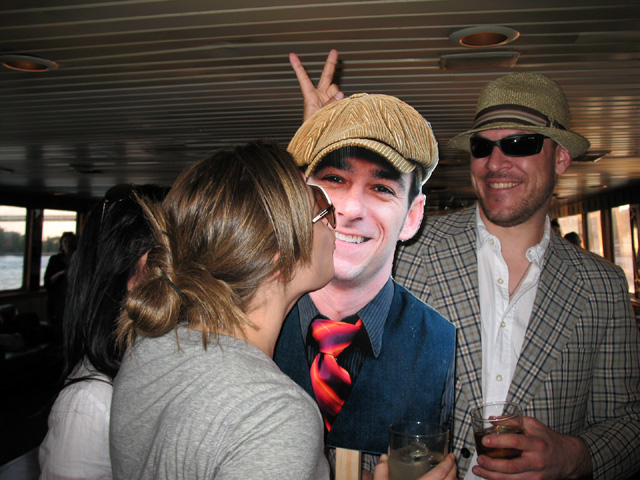 Faux Tad gets some love while Jason Littrell looks on with envy.

For me, the Three Tour was the best event of the MCC. Everything came together in one afternoon: gorgeous weather, friends from near and far, plenty of food and water, and of course top notch cocktails. Cheers to The Tippling Point and Royal Princess Charters!

NEXT: STORIES FROM BEHIND THE BAR – PDT