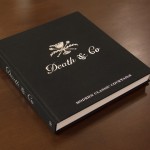 In his introduction to Death & Co: Modern Classic Cocktails, David Kaplan, the founder and owner of Death & Company, describes a turning point in the history of the acclaimed craft cocktail bar located in New York’s East Village. The State Liquor Authority had unjustly revoked Death & Co’s liquor license, and Kaplan sued the SLA for denying a license without claim. “This was a crucial, gut-check moment for everyone at Death & Co: We were either going to give up the fight and find other jobs, or we were going to double-down on our bar and treat every shift like our last.”

The Death & Co family persevered, and a liquor license was finally issued in 2010, the same year that Death & Co was named Best American Cocktail Bar and World’s Best Cocktail Menu at the Tales of the Cocktail Spirited Awards.

Death & Co: Modern Classic Cocktails is the highly anticipated book written by Kaplan, Alex Day and Nick Fauchald, published by Ten Speed Press and releasing on Oct. 7, 2014. Fauchald, a Brooklyn-based writer, editor and publisher, first met Day through his previous bartending gigs. “[Alex] used to serve me cocktails in teacups at a place called The Back Room, then he was a wunderkind cocktail geek at a Soho bar called Tailor,” says Fauchald in an email. Day became a Death & Co bartender in 2008, then a co-owner, and is now Kaplan’s partner in the hospitality operations and design company, Proprietors LLC. “I’d be an early semi-regular at Death & Co and knew that if I was ever going to write a book about cocktails, I’d want to do it with them. This idea became a reality when Dave’s agent got in touch to let me know that they needed a writer; it wasn’t a tough sell for me.”

Fauchald sums up the Death & Co writing process: “I chased Dave, Alex and the rest of the D&C bartenders around for a year and took a lot of notes, then locked myself in a barn for a week and turned them into something that resembled a book. But I also tried to spend as much time as possible learning how to become a Death & Co-level bartender.” Intriguingly, in the book’s acknowledgments Fauchald notes that his “path to enlightenment” began with Day in a Chinese restaurant on St. Mark’s Place, with “a pair of chopsticks and an empty water glass.” (Perhaps a demo of stirring technique?) Fauchald continues, “Obviously I got nowhere near their level of expertise, but I found that the more time I spent mixing cocktails and doing other hands-on stuff at the bar – or at Dave and Alex’s L.A. office – the better I could understand and translate their many methods into words.”

Each chapter of Death & Co builds on the previous one, beginning with “A Night at Death & Co,” and continuing with “Building a Bar,” “Building a Drink,” “Creating New Classics,” and “The Specs.” The book includes more than 500 cocktail recipes, starting with Phil Ward’s iconic Oaxaca Old Fashioned. But in addition to the expected recipes, tools and techniques, Death & Co delves deeper into the life of the bar itself, from a breakdown of a “typical” day/night, to a glossary of D&C lingo, a menu tasting, and even a collection of Death & Co’s worst cocktail names (“Short Rib” anyone? Bueller?). The behind-the-scenes theme touches the recipes as well, such as the insight that the Daiquiri is akin to D&C’s “secret handshake,” and the pre-shift drink of choice – so much so, that GDT (Gangster Daiquiri Time) has become a nightly ritual, in which a designated bartender creates a round of Daiquiris or variations for the staff.

In the days leading up to the book’s release, Kaplan and Death & Co have been posting teasers of William Hereford’s photos, with recipes like the Joy Division: “One of my favorite cocktails, not surprisingly it was created by Phil Ward. Beautifully pearlescent due to the absinthe. Shot by @williamhereford for the #deathandcobook. Joy Division. 2 oz Beefeater Gin. 1 oz dry vermouth. 1/2 Cointreau. 3 dashes of absinthe. Discarded lemon twist.” 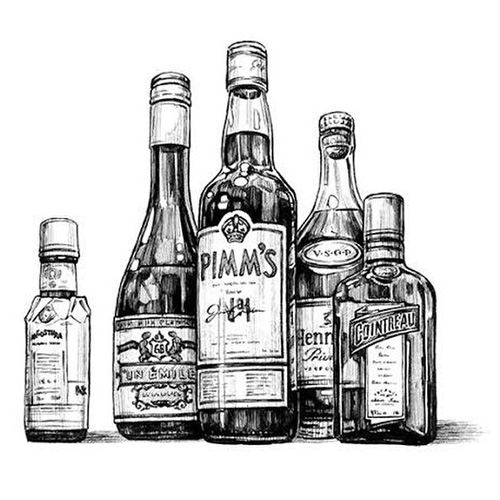 Death & Co features the work of Tim Tomkinson and his wife Katherine, who illustrate and design the bar’s menus. The handsome, cloth-bound book was designed by Katherine and features over 100 of Tim’s illustrations. Tim’s Death & Co logo is prominently featured on the cover, and the red titles that he created for the cocktail menus are included throughout the book.

One of the book’s best and most unique features is “The Regulars,” a series of contributions from regular customers who share their D&C experiences and their favorite cocktails. A great anecdote comes from Anthony Sarnicola and Regina Connors, who recall the time Death & Co had engraved some of the regulars’ names on silver plaques on the backs of bar stools.

Regina: “Dave grabbed us and went around the bar with a lighter to show us our names.”
Anthony: “He held a lighter under people’s asses saying, ‘Excuse me, excuse me,’ until he found our stools.”

Another memorable story is told by Cocktail Kingdom co-founder Don Lee, who looks back at his one and only shift at Death & Co.

Kaplan titles his intro “The Story of An Underdog Bar,” and this throughline anchors the seven-year journey of Death & Co and its world-class team that’s been exhaustively documented by the authors. The final result is a book that takes its place in the pantheon of essential modern cocktail books. “I think the finished product is pretty close to what we set out to make: a cocktail book that explains the whys and hows behind making great drinks,” says Fauchald. “From our first meeting I told Dave that I didn’t want to work on yet another bar book, which tend to be little more than collections of recipes and anecdotes. Instead, we wanted to explain why one shaker is better than another, help readers choose the right bottles of booze for making drinks and show them – as best as we could on a piece of paper – how to mix and serve top-notch cocktails.”

“DEATH & CO” BOOK TOUR
To celebrate the book’s release, Death & Co is taking over the Bowery Hotel in the Lower East Side on Tuesday, Oct. 7. The $75 ticket includes bottomless cocktails and a copy of the book.

Following the New York launch, the Death & Co tour heads west to Los Angeles, where a book release party is taking place on Wednesday, Oct. 15 at Honeycut in Downtown L.A. For $55, guests will be admitted to the subterranean bar-discoteque to enjoy endless Death & Co cocktails mixed by the D&C crew, and then take home a copy of Death & Co. Tickets are on sale now at Eventbrite.