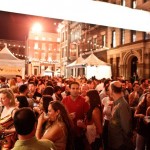 A Taste of The Taste: Cocktail Confidential

Thousands of foodies and cocktail aficionados gathered at Paramount Pictures Studios this past Labor Day Weekend for The Taste, the Los Angeles Times three-day festival that celebrates the Southern California culinary scene. Over the course of five events, attendees could sample unlimited tastings from top restaurants, craft cocktail bars and food trucks, as well as check out cooking and mixology demos and panel discussions. 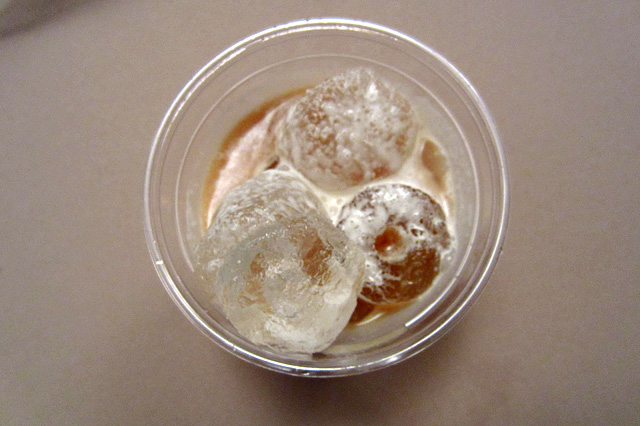 I could not have asked for a better first cocktail than the one that was handed to me by Zahra Bates (Providence) at the Plantation Rum booth. Her rum-based Irish Coffee variation included Plantation Rum, Pierre Ferrand Dry Curaçao and Angostura Bitters, and it was exactly what I needed to deal with the lingering effects of a weapons grade hangover from the night before. 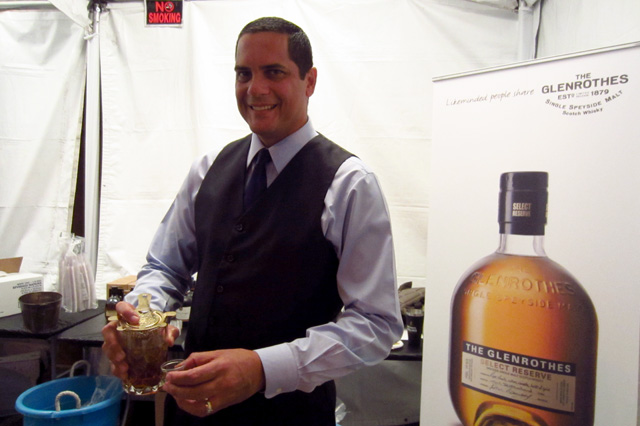 The next booth over featured The Glenrothes and Maurice Chevalier IV (Anchor Distilling), who was serving his 50 Shades of Spey: The Glenrothes 1998, sweet vermouth, Earl Grey tea, Pages Vedrenne Peach Liqueur and Aromatic Bitters. Properly caffeinated and fueled, I made my way to the heart of the party in Paramount’s iconic backlot. 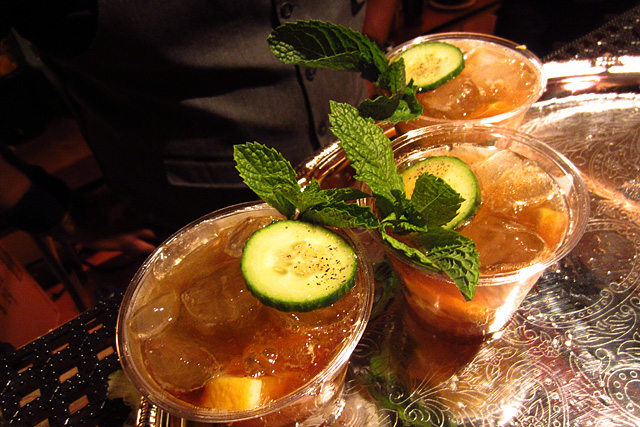 With the booze-to-food ratio heavily weighed to the former (this was Cocktail Confidential, after all), I made a tactical error by sampling cocktails instead of grabbing food right away. Not that I would ever complain about sipping an Atlantico Rum punch made by Alex Straus or a Pimm’s Cup No. 5 from Cole’s, but the lines for food quickly grew insurmountable. 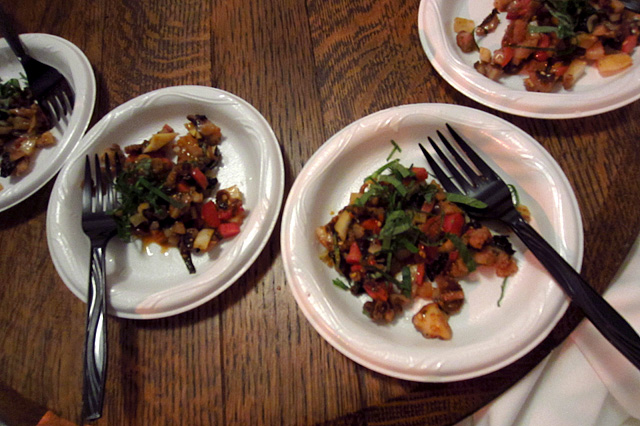 One booth where I did score a bite was A-Frame / Sunny Spot, where chef Roy Choi was dishing out his Octopy L.A.: charred baby octopus with carrot kochujang puree, pickled vegetables and toasted seaweed. 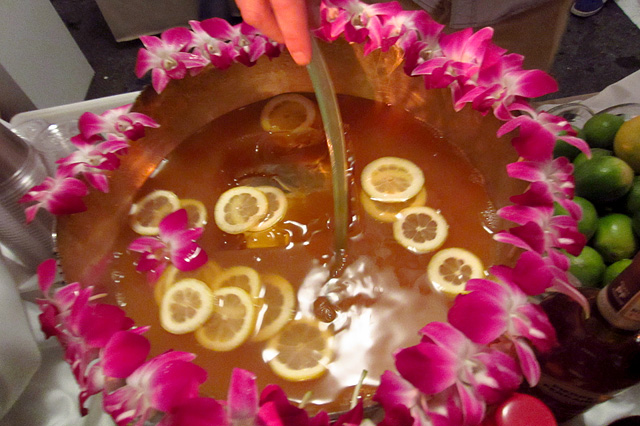 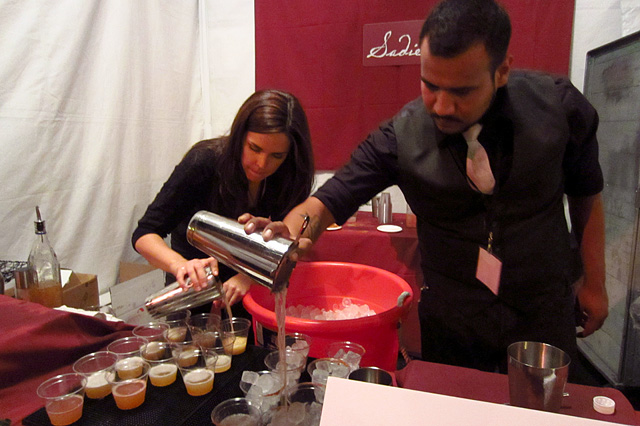 Then it was time for the Mix-Off On the Backlot, a cocktail competition that took place in the same tent that earlier featured demos from Tricia Alley (Southern California Director of Mixology, Southern Wine & Spirits) and Alex Day of Proprietors LLC. Judging the competition were Gelt and Cox, along with the Times Pulitzer Prize-winning restaurant critic, Jonathan Gold.

The mix-off featured a stellar lineup of bartenders: Jaymee Mandeville (Drago Centro), Nathan Oliver (The Vagrancy Project), Paul Sanguinetti (Ray’s and Stark Bar), Brian Summers (The Parish), Marcos Tello, and Roger Room’s Damian Windsor. The competition unfolded in two rounds. In the first round, each of the six bartenders was given a “mystery box” with three ingredients. They had eight minutes to create a cocktail that used two of the three ingredients. In the second round, the finalists had to create a cocktail to pair with a dish from Kris Yenbamroong (Night + Market), who would also sit in as a judge for the blind tasting. 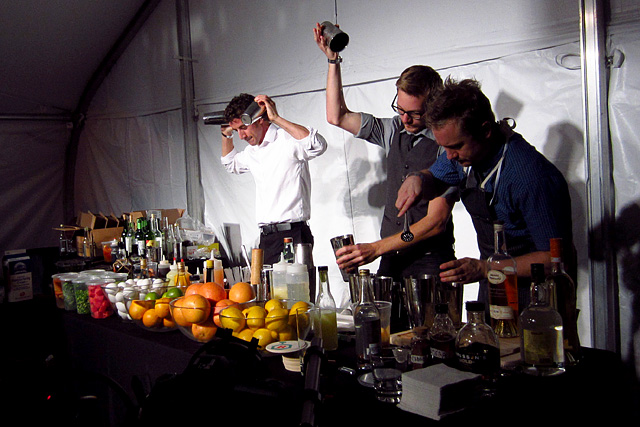 With so much talent in the mix, any of the bartenders had a chance to claim victory. I thought Sanguinetti’s work at Stark Bar was particularly well-suited to the competition, while Caroline on Crack noted in her recap that Tello had the confidence of someone who knew the outcome before the first jigger was poured. Mandeville, Tello and Windsor faced off in the first half of the elimination round, followed by Oliver, Sanguinetti and Summers. 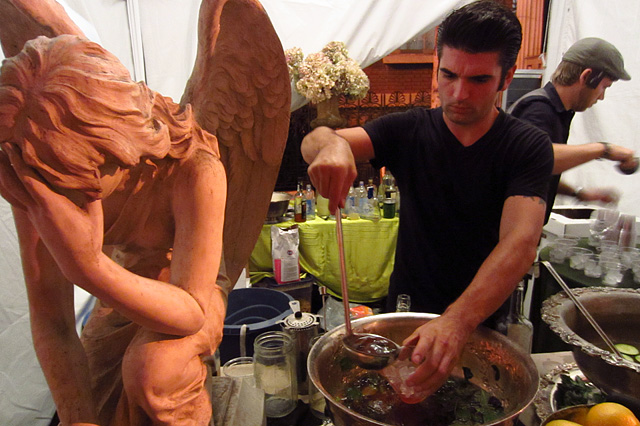 Despite the time limits, the competition dragged on and Caroline, e*starLA and I were forced to hunt for more drinks food. The lines hadn’t abated, but we were saved by the delicious gouda and cheddar Mac Balls from Pig’s Feet Under, which were filled with chorizo and Chinese lap cheong and served with Angry Queso Dip. A quick detour to the Villains Tavern booth gave us a rye whiskey and hibiscus punch, which paired nicely with the Mac Balls. 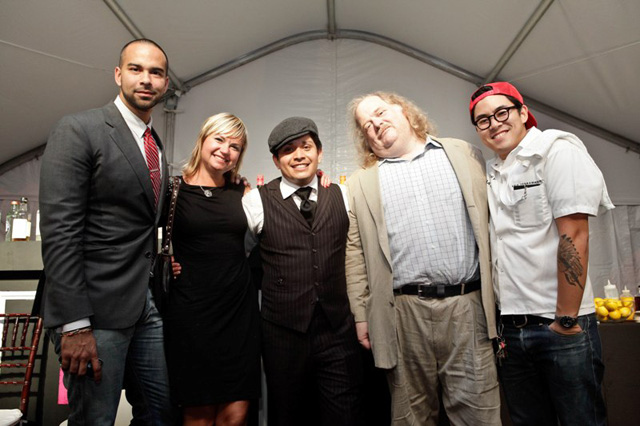 Back at the mix-off, Oliver, Summers and Tello had advanced to the final round and created cocktails to pair with Yenbamroong’s spicy Thai catfish. The judges tallied their scores and Marco Tello was named the champion of the Mix-Off On the Backlot. How’s that for the power of positive thinking?

After the jump, Tello shares the recipes for his winning cocktails, the Midnight in the Garden of Good & Evil and the Day Trader. 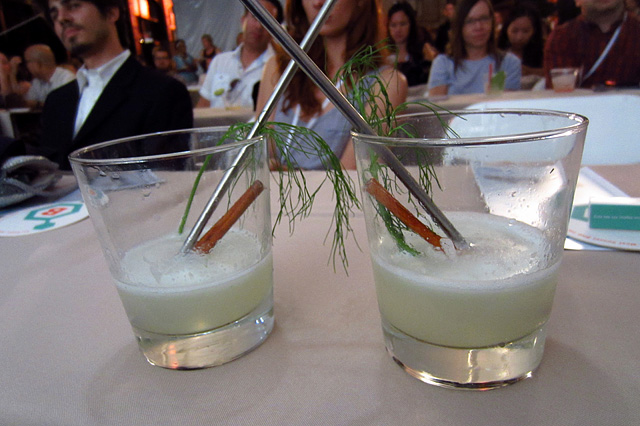 Midnight in the Garden of Good & Evil

In the first round of the Mix-Off On the Backlot, Tello had fennel, watermelon and cinnamon sticks in his mystery box. He flash-infused tequila with fennel by using an ISI charger, then created a cinnamon smoke by finely grinding a cinnamon stick, placing in a smoke gun, igniting, and injecting into the glass.

Midnight in the Garden of Good & Evil
Created by Marcos Tello
Ingredients:

For the final, the competitors had to pair a cocktail with a very spicy Thai catfish from Night + Market. Tello said that Vincenzo Marianella (Copa d’Oro) taught him to go with opposites when pairing food and cocktails, so with the catfish Tello decided to cool the judges’ palates with the Day Trader.